The Discworld stories are highly regarded for their witty writing style, incisive satire, and charismatic characters. Their differences from more traditional fantasy stories such as Tolkien’s contributed to their great popularity.

As a troll, Detritus is animate rock. He’s extremely strong and durable, even compared to other trolls, although he’s by no means the largest.

As with most trolls, his intelligence is limited in lowland climes. But this can be countered by a helmet built for him by Cuddy (which he only wears occasionally, possibly for fear of it being damaged).

Detritus wears the Watch breastplate to identify him as a Watchman. However he doesn’t bother with their weapons, which would probably get broken. If serious trouble is in the offing he’ll take out his Piecemaker.

Technically a 2000 lb siege crossbow, it’s meant to be mounted on a vehicle. While it originally fired a single large bolt, it’s been modified to fire a few dozen bolts at a time, with such force that they splinter apart shortly after leaving the bow, often igniting. Anyone caught directly in its path generally becomes a red mist.

Detritus formerly was a splatter (similar to a bouncer, but more forceful) at the Mended Drum. He then got a job in the Holy Wood pictures industry as a thug for C.M.O.T. Dibbler. There he met and fell in love with Ruby, who encouraged him to get a better job.

When the Watch began recruiting minorities, Detritus was among the first to volunteer. Less than happy at being partnered with the dwarf, Cuddy, Detritus overcame his prejudice as they were forced to work together to survive on the troubled streets.

After chasing the killer into a freezing warehouse the pair were trapped, and Detritus’ intellect was increased to genius level. He threw Cuddy out a high window, and the dwarf managed to get Detritus out before the cold overcame him.

Cuddy then built Detritus a helmet that cooled his brain to allow him to think faster. The dwarf was murdered soon after by the killer they’d been hunting, leaving Detritus shaken by the loss.

A sergeant by this point, Detritus was in charge of training new watchmen in the broad aspects of being a watchman. Drills included how to march, and not pee yourself when a troll shouts in your face.

Travelling to Uberwald with Vimes’ retinue, Detritus caused a stir in the traditional dwarf community. But after saving the Low King’s life he gained a kind of welcome. From the Low King, at least.

By this point he and Ruby are married, but haven’t been able to have kids. After pulling young troll Brick out of trouble, Detritus kind of adopts him, and forces him to join the Watch.

As a troll, Detritus is a very large statue that moves and shouts a lot. His exact size is unclear, and depictions vary. But he can fit comfortably in most human buildings, albeit sometimes having to hunch.

At Ankh-Morpork temperature Detritus can be a bit slow. Once he gets an idea in his head he can be reluctant to let it go. He’s a loyal and conscientious officer. His inbred dislike of dwarfs has been overcome in favour of a copper’s general disdain for all civilians, dwarf and troll alike.

He’s fallen comfortably into the role of drill sergeant, training the new recruits mainly by shouting at them until they do it properly or run away from the city.

“You listen up good right now ! You in the watch, boy ! It a job with opportunity ! I only been doin’ it ten minutes and already I get promoted ! Also got education and training for a good job in Civilian Street ! This your club with nail in it. You will eat it. You will sleep on it ! When Detritus say jump, you say… what colour !”

“Boys, if dere was a PhD in bein’ fick, youse wouldn’t be able to find a pencil.”

Trolls think better at cooler temperatures. Their natural climate is high in the mountains, but most live lower down these days, resulting in a generally low level of intellect. 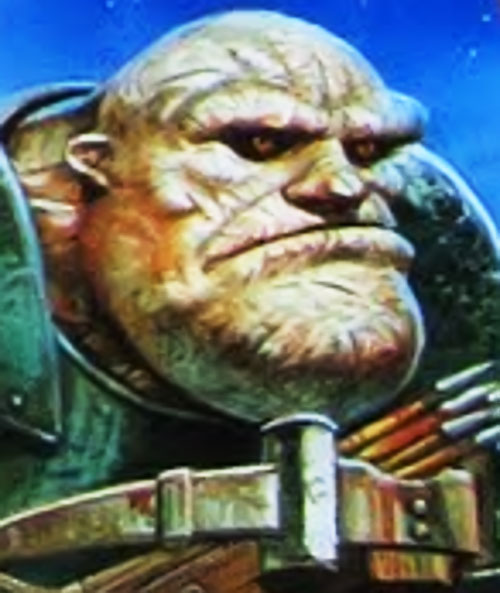