Deuce has the weird ability to produce, seemingly from nowhere, any hand-held weapon that he knows of and understands.

He has in the past been able to produce swords and knives, thrown weapons such as shuriken and axes, whips or chain weapons, various revolvers and semi-automatic handguns, rifles, shotguns, sub-machine guns, even such high-end esoterica as a gauss needle gun, a gyro-jet pistol, a flame-thrower, or a rocket-propelled grenade launcher.

The limitations on his ability are ill-defined. However, it is known that he can only produce hand-held weapons. His ability cannot produce vehicle mounted weapons or other high-mass systems such as an anti-aircraft missile. Furthermore, he must fully comprehend how the weapon itself works.

For example, he can produce a fully-loaded .50 Desert Eagle. But producing a futuristic “phaser” weapon would be beyond him because he does not comprehend the principles that would make it work. In DC Heroes RPG terms, he cannot produce any weapon that would require the Genius Advantage to build.

Some of these limitations may be partly or entirely psychological. The mass factor, for instance, seems to stem from the fact that Deuce produces weapons by pulling them out from under his coat. Apparently he can’t produce any weapon that wouldn’t fit under it.

If he is not wearing his voluminous overcoat, he has difficulty producing any weapons. In a pinch he has pulled items from his sleeve, a pocket, or from behind his body, or even out of a previously empty shoebox. But he always prefers to do so from under his coat.

Normally when he has fired a weapon empty, he discards it and pulls another, fully-loaded weapon. It was never known what became of those discarded weapons, because usually they were gone when he went back to retrieve them. And frankly, he was never very curious about it.

On one occasion, however, on being captured by an enemy, he was disarmed and his weapons studied. It was discovered that the weapon he had produced, a common Colt-style 1911A .45 semi-automatic pistol, had no brand markings, no serial numbers, and the weapon itself simply vanished after an hour’s duration.

The source of the weapons Deuce produces is so far unknown.

Deuce is a former U.S. Army Ranger. He was discharged from his unit after manifesting his ability to pull weapons out of thin air. The officers who questioned him about the source of the weapons he produced were not satisfied with his answers. Considering him a security risk, they had him discharged from military service.

Because of his distinguished service during the first Gulf War, he could not be dishonorably discharged. But his discharge without prejudice was contingent on Deuce remaining silent on security matters to which he was privy.

Deuce tried to join the Boston Police, but the position he desired with the SWAT team was not available. So while he waited to see if one such would open up, he became a private security officer. From there he eventually took a job as a private bodyguard, and began to study for a Private Investigator’s license.

After obtaining his license, he also joined with a bail bondsman as a bounty hunter.

Deuce usually did not have any dealings with superhuman opponents until he had been a bounty hunter for several years. On a job in New York City, trying to apprehend a notorious mafia hitman called the Widowmaker, Deuce was captured by Widowmaker’s employer, an immortal martial artist known as Cinnamon.

Cinnamon was searching for superhuman minions to employ, and had captured several for study. Along with other superhumans, Wraith (ninja-type) and Boost (growth monster), he managed to escape from Cinnamon’s hidden compound, right through her small cadre of superhuman minions already loyal to her.

We could be heroes

In defeating Cinnamon’s hired superhuman thugs, Cinnamon was forced to retreat, leaving the underground compound in the possession of the three superhumans who had been captured, and they took it over as their own base of operations.

Eventually they were joined by others; Sabre (gene-engineered super-soldier), Speedshot (speedster ), and Teaser (light manipulator with modesty problems). Although they had no official name for their group, eventually the group joined the U.S. government as an FBI investigation and fast-response team for superhuman threats.

The FBI referred to the project as “Civilian Operations/Police Support Specialists or the COPS Project.

Tall and wiry, Deuce is in his mid-20s, with wild brown hair and eyes, and wears a stylish goatee. He usually wears polarized shooters’ glasses.

When adventuring, Deuce wears a set of standard-issue second-generation ballistic cloth armor, with his ubiquitous huge overcoat. Given his power, he does not *appear* to be armed.

Deuce is a bluff, plain-spoken man of few words, but he always says what he means and means what he says. In fact, he’s so blunt and brutally honest that he’s actually off-putting. He’s honest enough that he’ll tell you what he thinks of you right to your face and not think a thing about whether you like it or not, or if it insults you.

Having spent a lot of time in the military and involved peripherally with law enforcement, Deuce has a penchant to see the law upheld. He can be considered “Lawful Neutral”…

He believes in honor, order, rules and tradition, and always the greater good, and in his view the law is the greatest good for the most people. It’s best not to break the law in his presence.

He has a good relationship with the authorities, with police contacts almost everywhere he goes.

The campaign Deuce took part in was a mixed Marvel/DC Universe with a lot of individual element thrown in… He and his entire team can be dropped in (since they were PCs, it works exceptionally well) as long as it is essentially a street-level game.

Bonuses and Limitations:
Fabricate: Gadgets, Not Artifacts, Not Doodads, ONLY hand-held weapons, 1 hour duration, If he is not wearing his Huge Overcoat (TM), he must make a Will Check vs The Universal Modifier to see if he can produce the desired weapon. (2/2 if he has another, unobservable place such as a pocket, a sleeve, etc. to pull it from, up to 6/6 if he has no place but behind his back from which to produce said weapon)

While given his ability, the simplest way to model the power would have been to give him Projectile Weapons, the flavor was all wrong. Given that he actually has to create an object out of thin air, Fabricate seemed a better conceptual fit. 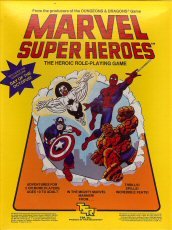