The second Devastator can safely be assumed to be an elite soldier, and was well-trained in the use of power armours . He led a squad of troopers in power armour, and is bilingual in Russian and English. Larionov seems pretty good at manoeuvring in flight, especially to dodge attacks.

Both the armours he wore, and the less powerful armours his men wore, were based on designs salvaged from the Russian boy genius the Gremlin. It was the Gremlin who designed the first Devastator armour.

The first suit was practically identical in aspect to the Gremlin’s original armour. It seemed roughly as powerful – though I get the impression its beams were a tad less powerful and it was more mobile. Presumably, it was salvaged nearly intact from the Gremlin’s labs. 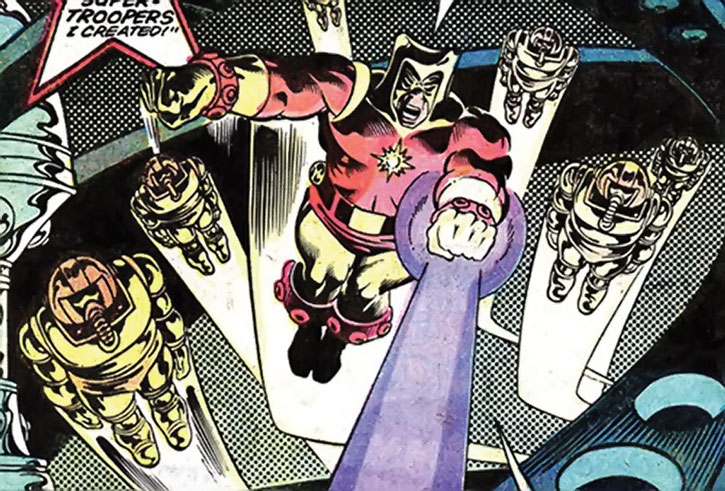 The Devastator armour is a protective suit with powerful subsonic jet boots, and energy cannons built into the gauntlets. The gauntlets can also fire microwave bursts with a broader impact. The suit is powered by a satellite, and must thus maintain line-of-sight with it.

Yet this restriction is not as bad as it sounds. For instance when fighting in a metallic, underground lab at least ten meters under the ground, the Devastator didn’t seem inconvenienced. How much rock and metal the power from the satellite can penetrate is unrevealed.

The first satellite was on a normal orbit, its window of power constantly moving and restricting operations. When it was destroyed another satellite was built and launched, apparently in geosynchronous orbit over Russia.

The Devastator headed a squadron of men in flying power armour. These designs resembled the Super-Trooper armours the Gremlin used to equip his men, but were obviously far less powerful than those designs.

These armours were thus presumably attempts at building replicas based on incomplete information about the Gremlin’s technology. Or maybe they were just made to look like the Gremlin’s Super-Trooper armours to deceive enemies as to their true powers.

There were nine troopers with the Devastator, though he apparently left two or three behind when he engaged the Spaceknights. Whether this unit still exists is unrevealed.

Gregori Larionov was presumably activated after the agent of the Gremlin wearing the first Devastator suit, Kirkov Petrovna, was killed during an operation. Whether Larionov was a Gremlin man, or was detailed by the KGB to use a salvaged armour after the fall of the Gremlin, is unrevealed.

The second Devastator and his men were called in when a Red Army patrol in the Forbidden Zone ran into the Gremlin. The young genius was then helped by Rom and Starshine, two Spaceknights. The Gremlin, having discovered the extent of the Dire Wraith presence in the Soviet Union, had been branded an enemy of the State.

When he ran into Rom and Starshine, two great enemies of the Dire Wraiths, the Gremlin allied with them. The Gremlin proved instrumental in saving Rom’s life after the spaceknight was tricked by the artificial intelligence Quasimodo. 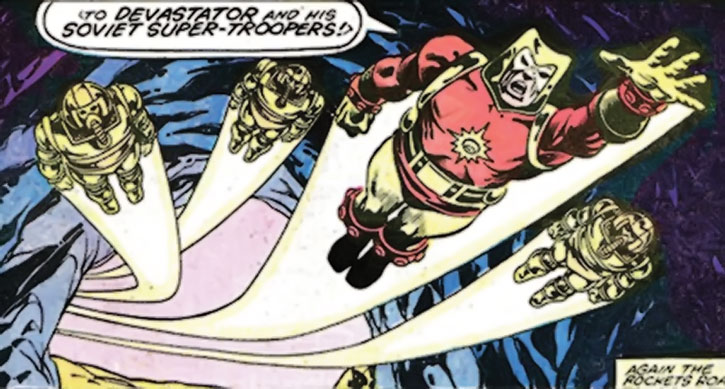 When the Devastator and his squad arrived, they found the patrol still standing but utterly paralysed. Assuming the worst, the Soviets flew in ready to shoot any opposition to bits. Then they reached the sinister underground lab the Gremlin was using to save Rom.

Starshine intercepted them to let the Gremlin work and save her great love Rom. The Super-Troopers found themselves completely outmatched. The Devastator hammered her and might have killed her to save his men, but the reanimated Rom then came to the rescue.

The technology Larionov and his men were using was no match for two alien spaceknights. One of the Super-Troopers was killed, the others knocked out, and the gauntlets of Larionov’s suit destroyed. The later made the satellite explode through feedback.

Years later the Devastator II, wearing a redesigned and modernised suit, was seen training against the Crimson Dynamo (Valentin Shatalov) in the Khimky combat simulation centre. Larionov being then KGB and Shatalov being GRU, the training exercise was rather vigorous due to the old rivalry between the two agencies.

Devastator won two rounds in a row, though he didn’t realise that it was largely due Shatalov’s consciousness flickering in and out of his body due to an unrelated incident in the US.

Not much was seen about that. He seems to be a proud, dedicated soldier and special agent.

“The treacherous words dripping from your own deformed lips brand you an enemy of the State, Gremlin. In the name of the State, then, you and all who stand beside you… shall die !”

“You will need no translation to understand me, woman, for I have been schooled in English ! And I think you will find that power is a language unto itself !” (KWADOOM !)

Drawbacks:
MIA toward serving the State.

While they were dispatched very quickly, these men can be assumed to have standard shock troopers stats and their armour likely had those stats:
SECOND GENERATION SUPER TROOPER ARMOUR [/BODY/ 06, Flight: 08, Laser beam: 08, Sealed systems: 05, Skin armour: 02]. 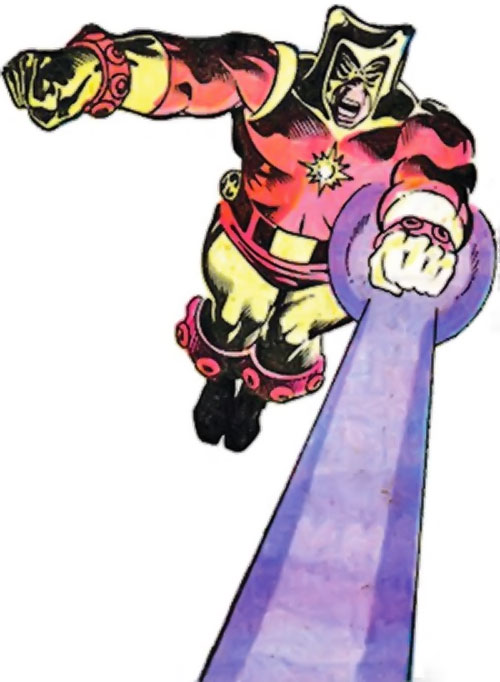 Later version of the Devastator armour : 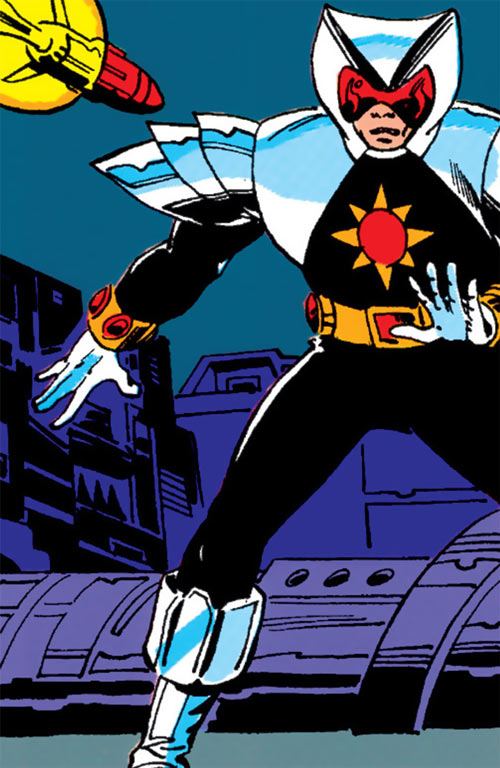