The Devourer is a quick and gifted combatant with superhuman strength. He’s perfectly able to defeat even Daredevil (Matt Murdock). He even could parry a thrown billy club, cutting it neatly in two with his sword.

Tommy Webster was a mediocre museum guard, caught in an altercation between thieves and Daredevil. He was hit in the face after Daredevil’s billy club made a wrong ricochet off one of the thieves, and bled on one of the Mayan statues that were on display.

The blood completed an ancient pact. It thus turned Webster into a Devourer.

Devourers were creatures used as enforcers by the ancient Mayan death gods. These killers would be sent from the gods’ underwater realm of Xibalba to the surface when sacrifices were insufficient or faith lapsing.

The blood of a man on the statue was sufficient to activate one Devourer. To summon more, the man who had made the blood flow had to be sacrificed. The lone Devourer was thus sent after Daredevil by the death gods, who wanted to reacquire worship through terrorism using Devourers. While looking for Daredevil, it went on a killing spree to spread terror.

Although Daredevil couldn’t outfight the Devourer, he managed to disperse it and revert it to human form. This was done by wearing the statue as a pendant and having the Devourer bleed on it. Murdock was nearly killed in the attempt.

The Devourer came back once, when the King resurrected him. But the creature was again destroyed by Daredevil.

“Your resistance only hinders your journey to Xibalba.”

The Devourer would be a valid encounter for the Batman.

Advantages:
Iron Nerves, Insta-Change, Lightning Reflexes – and there is a high probability he has Language (Mayan). 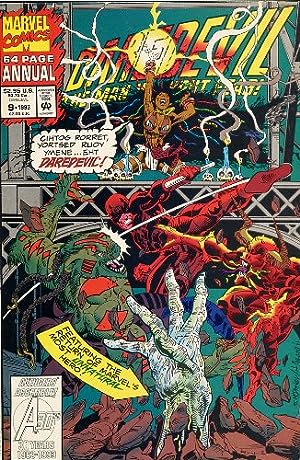