Dgrth, like many other gods, derives his power from worship. The number and fervour of the believers are what power him.

Our guesstimated game stats are based on his fight against Wonder Woman, which occurs when he’s clearly the dominant god of Stalker’s world – and quite possibly others.

With this level of power, Dgrth can still be fought physically, but it will require major superhuman force. The gigantic Dgrth was able to fight even Wonder Woman toe-to-toe. He could match even her fearsome speed and strength, and was obviously more resilient than her.

Beside his immense size, strength and warlike nature, an important asset is that the touch of Dgrth burns like no Earthly fire could. Howbeit, water can extinguish it for a short while.

Dgrth can enhance persons in exchange for their soul, as he did with Stalker or the Oracle. He can also use hellfire for scrying to view other worlds and remote events. His underworld dimension is also full of demons and monsters and undead and that sort of things.

Barring very involved circumstances, Dgrth cannot die. It takes an occult master to divine one way to kill Dgrth. The one such circumstance that was discovered was being stricken by the blades of four specific great swordbearers from four different worlds and times, on a specific altar at World’s End, while a precise ritual is conducted by an occult master.

If other circumstances exist, they’re presumably at least as demanding.

Even when some extraordinary force can hack him to bits, Dgrth remains alive, conscious and talking. He will eventually regenerate from there. He doesn’t seem to have a metabolism as such – hacking off his hand hurt but did not slow him down.

The gods of Stalker’s world appear to be magical space aliens. In the distant past, they invaded a colony world populated by human spacefarers. They then seemingly warped local reality so magic would replace science, ensuring their domination. After a long, long while they were ousted by a rebellion and locked into a prison dimension. 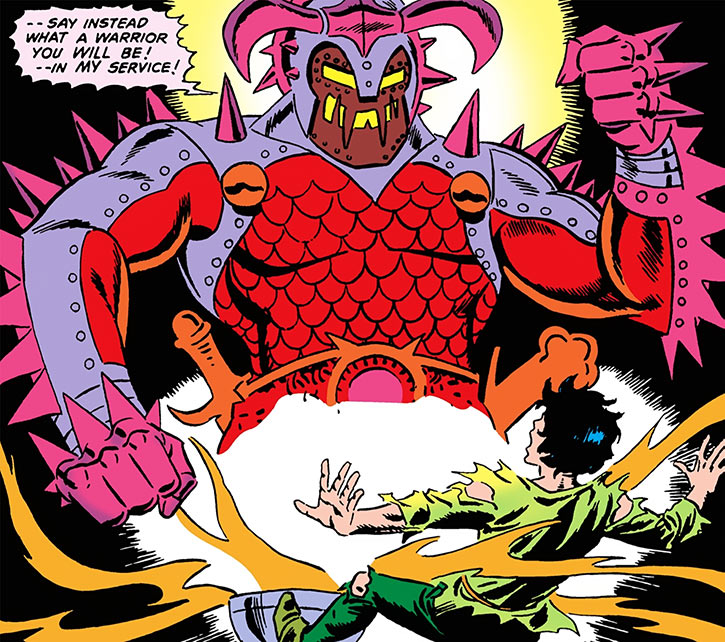 Rogue human occultists  nevertheless entreated the deposed aliens in return for magical power. Many of the aliens thus made their gradual return as gods. They were still exiled and imprisoned, but they were worshipped in return for power or the hope of favours.

Dgrth apparently established himself as the most sought-after such god on Stalker’s dismal world. His divine portfolio — war, evil and lies — was in demand.

There *might* be connections between these gods and other settings of the DC Implosion  . Magical space invaders conquering humanity are also found in Starfire. Furthermore, the Satan in Beowulf is quite reminiscent of Dgrth – though his underworld is open and not closed like Dgrth’s.

With Starfire and Claw being referred to in Star Hunters, one might construct a bric-a-brac cosmology using the DC Implosion settings. See our Claw the Unconquered character profile for more.

Dgrth has been known to barter for souls, granting peak human skills in return. Those who made such pacts are not generally aware of each other, but are collectively known as the Chosen. Skilled priests of Dgrth can recognise the Chosen of Dgrth by the look in their eyes.

Two Chosen appear in the books. These are Stalker and the Oracle, the latter being a close equivalent of Barbara Gordon. The Oracle of Stalker’s world had apparently offered her legs and sanity, rather than her soul, in exchange for great mystical knowledge.

Dgrth’s Hell is full of bones, and the captive spirits of great warriors. There are thousands of skeletons and hundreds of ghosts. Those are the remains of fighters who have fallen to the alien invaders, all the way from the original invasion to the ousting.

The ghosts are not under Dgrth’s command. Otherwise, he would have long since absorbed their soul to reinforce his power. But their violent life and death have nevertheless condemned them to the Hell of the lord of war.

Beware the man with no soul !

Dgrth has temples throughout Stalker’s world. Their central feature is a huge flaming pit crossed by a thin sword-shaped bridge. Dgrth can be supplicated by duels on this tiny bridge, with the loser falling into the fire.

Dgrth’s clerics — the Priests of the Damned — are apparently experts at such fights. The main temple and the high priests exist on the edge of the world. The high priest was one Prior F’lan until his death at Stalker’s hand. 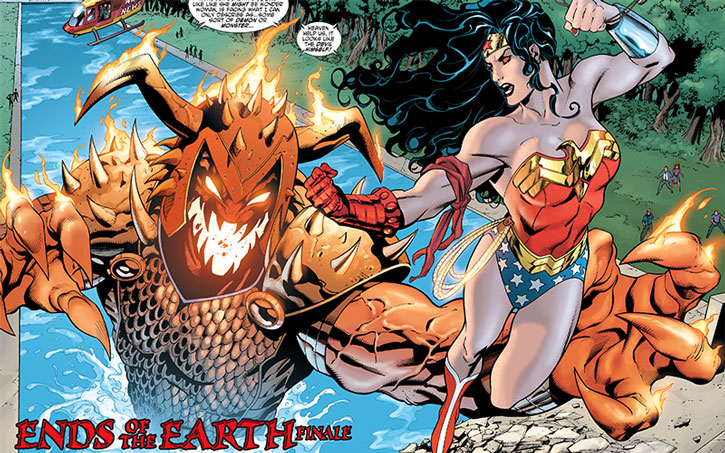 A part or the whole of the warrior caste serves Dgrth. The faith seems to have a strong “survival of the fittest” ethos. Fights to the death are the best way to know whom Dgrth favours.

When Stalker entered Hell during his quest to recover his soul, Dgrth had a servant imp put the warrior through tests. There was :

Stalker passed all tests, and Dgrth thought that he had found his greatest champion in centuries.

However, Stalker turned his back on the demon lord and rallied ghosts throughout Hell. He then led this army of the dead against Dgrth’s conjured flame demons. Stalker confronted Dgrth, but the infernal lord told him that he had long since consumed his soul, and magically banished him.

At some unknown point Dgrth gained a new servant, the famous enemy of Beowulf – Grendel.

The edge of insanity

Later (perhaps much later, as discussed in Stalker’s entry) Stalker met with another Chosen, the Oracle. She claimed that Dgrth was about to claim their entire world as well as other dimensions. 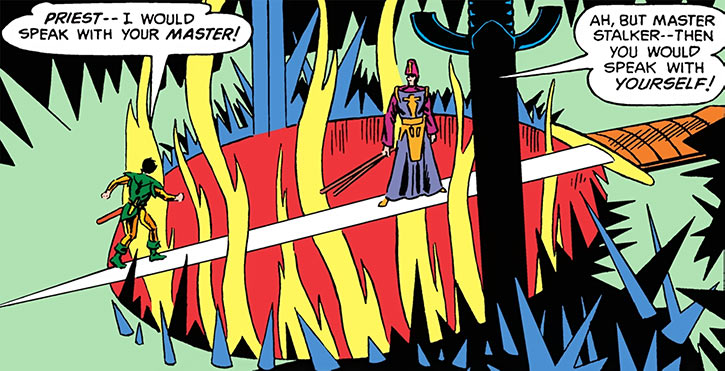 The Oracle knew of a way to kill the demon lord, which required four particular fighters and heroes. However, Dgrth discreetly contacted Stalker. The Hell-lord promised to return his soul if Stalker lured the other three to him to be slaughtered. Desperate, Stalker agreed to the deal.

Dgrth was thus prepared, and Stalker betrayed his companion at the agreed-upon time. However one of the three, Wonder Woman (Diana of Themyscira), could by then defeat Dgrth. The assets of the other three warriors had been mystically replicated in her –

Diana further carried the Lasso of Truth, anathema to the god of war and other lies.

Dgrth was defeated, and Stalker relented from his treachery to do the right thing as guided by Wonder Woman’s soul. Then the ritual took place, apparently destroying Dgrth.

Dgrth seems to be on an unrelenting path to power. He sees all power and evil as rightfully his, and plots to have the most power, the deadliest servants, the greatest influence, the fewest weaknesses and the like. He’s big on having those who would serve him go through tests, challenges, quests, duels and so on, to prove that they are the strongest.

Dgrth apparently found another way to power, beyond worship. It involved killing and draining his opponents. It may be the same process that allowed Stalker to become a near-god.

Once Dgrth discovered this, his plans changed. He became interested in direct conquest and genocide across Stalker’s world and other dimensions. How he planned to do that is unrevealed, but I suspect that it involved the same machine that Stalker ended up using.

“Those who champion my cause… the warrior caste and the priests of the damned… are weak, or fools ! It has been long centuries since I had a fit servant among the living ! You shall be that servant, Stalker ! For I am Dgrth, the lord of all that is evil and powerful, and I have decreed it !”

“Poor humans, how you value your souls so… as if they truly matter in the course of your tiny, short lives !”

“Come, children. Come drink of the death of your company !”

(Threatening Wonder Woman) “Your refusal is noted, speck. I shall set this world aside for special torment on your behalf. I’ll eat your people last, girl. […] I am agony, girl. You could no more defeat me than you can defeat death.”

Connections:
Srani (Low – the guardian of the gods’s prison dimension on Stalker’s world).

Drawbacks:
Strange Appearance, Misc.: Dgrth’s power are contingent upon being worshipped ; Misc.: Mystical and divine artefacts closely connected to powers opposite to Dgrth’s portfolio (peace, truth and good) acquire an EV when wielded against Dgrth, in direct proportion to the power of their enchantments – at the highest end of the spectrum, the Lasso of Truth had an EV of about 27 against Dgrth.

Rituals:
Dgrth knows a Ritual to turn hellfire in his dimension into a scrying mirror, through which he can observe other world and in particular his Chosen. This is a Remote Sensing Ritual with the Transdimensional Bonus and unknown Limitations.

He could also summon some burning dead dragons.

At world’s end, Dgrth conjured some minor servants that looked that burning skeletal dragons, about the size of an Asian elephant. Presumably this was a prepared Ritual with components and such, including having access to draconic skeletons in the first place – but then Dgrth’s hell is full of bones of all sorts.

Here are some very tentative stats for such servants (Dgrth apparently summoned three of those) – they seemed dangerous but fragile. 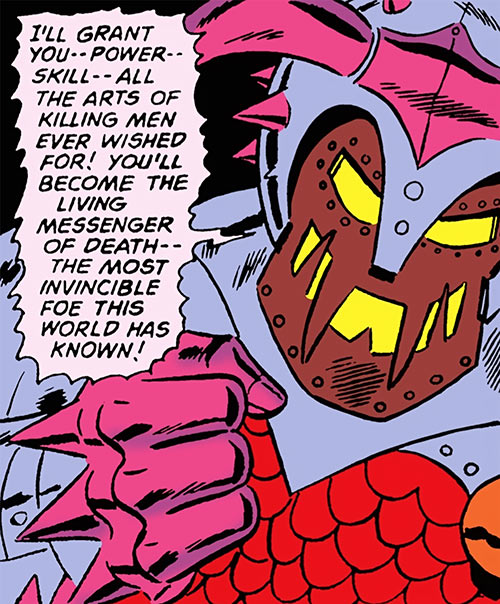 Technically, it should be “least vincible”. 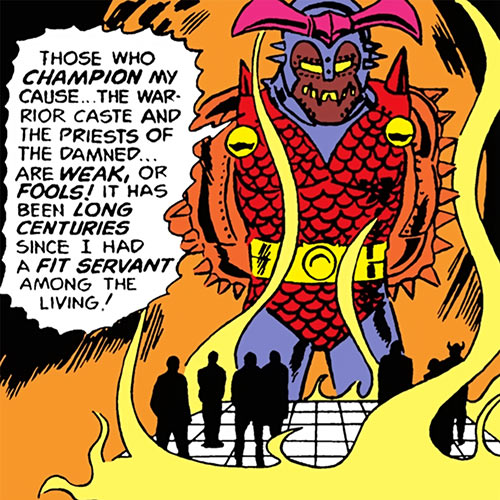 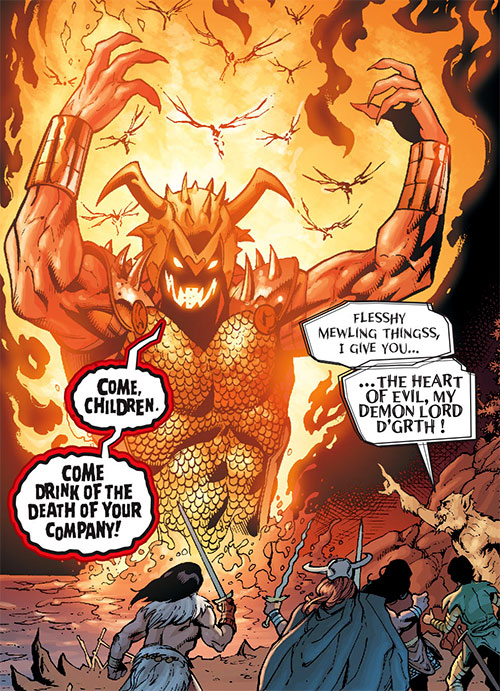 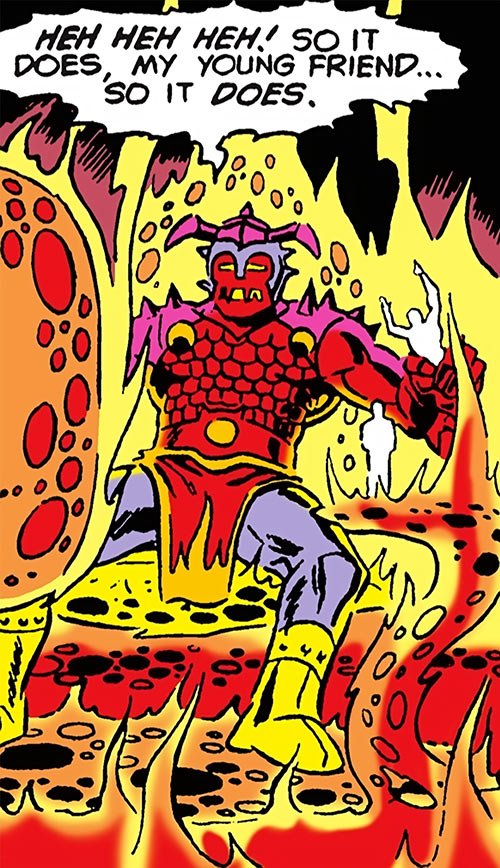