Dhalsim is one of the classic, famous characters in the landmark series of brawling video games Street Fighter. He appeared all the way back in 1991, in SF2.

Beyond his fame, he has the advantage of being from India – an oddly under-represented population in Western genre fiction.

Furthermore, his odd abilities are a rare mix of mysticism, flexibility, combat prowess and of course roasting his foes with his divine flames. He has a certain flair, shall we say.

Dhalsim has been a devoutly religious practitioner of yoga and loyal to his god Agni  all his life. He has gained a number of body control powers through this such as:

He is also quite skilled in: 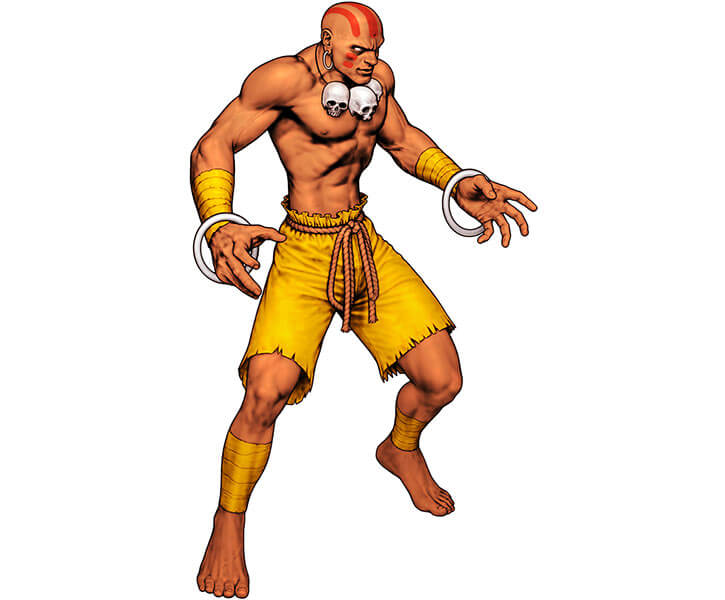 Dhalsim usually has the best long-range abilities in whatever game he appears in. So it’s best to play keep away with him as he has:

To offset this his floating ability and options to change direction while in the air can help him avoid rush attacks that are meant to get in close. And more skilled players can simply teleport out of harm’s way.

Another saving grace is that his close-range super flame attacks come out quick and do a lot of damage.

Dhalsim’s village was ravaged with both disease and famine. Even though he was a pacifist at heart he reluctantly entered the tournament to raise money to save them.

His presence in the tournament was negligeable. He likely beat up a few nobodies then dropped out after he had earned enough money to save his village.

This won him the respect of his fellow villagers who began addressing him as the “Great Yoga Master Dhalsim”.

In his ending he still questioned that whether resorting to violence was justified to have saved his village. But his wife tried to convince him that he had performed a noble deed.

Dhalsim came to the conclusion that evil such as Bison could not go unopposed. He set out put a stop to the evil dictator.

While searching for Bison he met Rose, another fellow mystical do gooder. The two helped each other out by sharing whatever information they had.

Later he met Birdie, a former Shadaloo thug for hire. Birdie refused to cooperate, but Dhalsim telepathically pried answers from the dimwitted criminal.

This new lead led him to Cammy. A clone of Bison, she was under the evil mastermind’s psychic yoke. Dhalsim used his own mental powers to “awaken” her, and grant her free will for the first time. 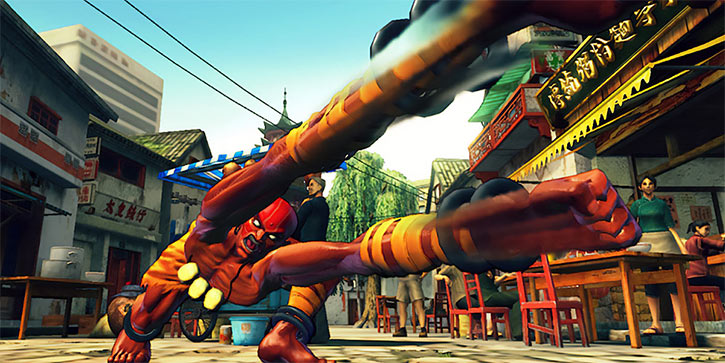 Dhalsim once again participated in the tournament to win money for his family. But he again dropped out early, as the violence was too offensive to him.

He returned home to spend some time with his family. He also occasionally traveled around India, doing good deeds for others.

Dhalsim was forced to enter the tournament, as a newly constructed dam blocked water to his village.

His son, Datta, who was pen pals with Guile’s daughter Amy, told Dhalsim that Guile had been dispatched to investigate the dam. So the situation was likely more serious than he had originally thought.

When fighting in the tournament he also met newcomer Rufus and defeated him.

After that he was able to defeat Seth, the evil organizer of the tournament. Dhalsim forced the villain to take down the dam, restoring the water to his village.

Dhalsim was approached by a young police officer named Mahesh. He wanted to learn yoga from the master in order to protect others.

Dhalsim explained that Yoga was not for power or violence, but to achieve harmony and understanding. He did however recognize that the young man’s heart was in the right place and decided to start training him.

One of their training sessions was interrupted by new comer Rashid. He was a fan of Dhalsim and wanted to challenge him in a friendly sparring match in order to become stronger. The Yoga Master defeated him.

Their training sessions were again interrupted by Oro, another mystical “wise old man on a mountain top” figure and an old acquaintance of Dhalsim.

He was surprised to see his old friend in India. The two debated ideology a bit before Oro departed to search for another powerful figure in the area that he could sense.

Their training was interrupted yet again by Rainbow Mika. The pro wrestler implored Dhalsim to teach her how to breathe fire, as she felt that it would be real crowd pleaser. Dhalsim agreed to teach her, but she was unable to pull off the technique.

He explained that Mika had a passionate fire inside of her. And that she shouldn’t give up – and would surely be able to breathe fire if she didn’t give up trying. Mika took the lesson in stride and the pair parted on friendly terms.

Karin Kanzuki happened upon Dhalsim as she was in India searching for Oro. She challenged the yoga master to a sparring match. After a long battle they agreed to end it in a draw. 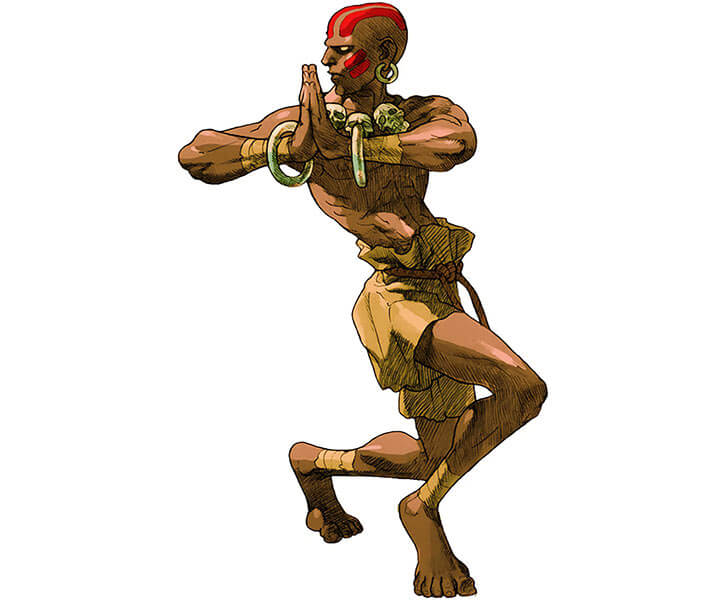 Oro stated that he respected Dhalsim’s pious zeal to pacifism and his attempts to make the world a better place. But he was eventually able to convince him that even though powers such as the Satsui no Hado (killing intent) and Bison’s Psycho Power had been wielded for evil, these were but tools. And could potentially be used for the greater good in the right hands.

Oro then departed and Dhalsim was thankful for his friend imparting him with his wisdom. 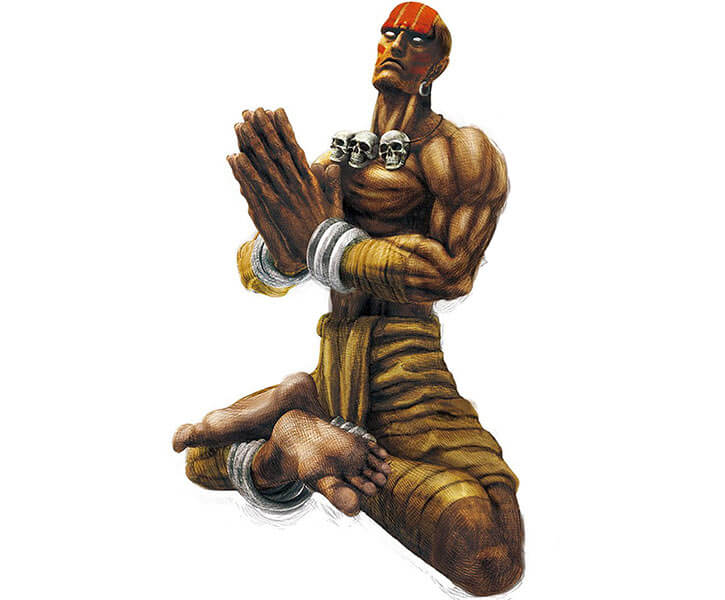 Dhalsim is a gaunt, thin, creepy-looking Indian man with pupils-less eyes and a shaved head.

He typically dresses in the most humble of clothes. Namely, a pair of ripped up trunks bound by a rope. He also wears oversized bracelets and anklets, and sports some unusual body paint.

He also wears three skulls on his necklace. As creepy as this may sound they are the skulls of three children who died from famine and disease that he could not prevent. He wears them as a reminder what will happen to his village should he fail.

Dhalsim is a devoutly caring humanitarian who is devoted to his family, village, and of course his patron god Agni.

He tries to make the world a better place and abhors violence. Dhalsim is an extreme pacifist and will never enter killing combat. He is most likely to try to end any confrontation in the least violent way.

He only participated in the Street Fighter tournament to keep buy food and medicine for his village. And even then he is still reluctant to use violence. He wishes to use his divine flames to try to purify other souls and end fights with the least amount of bloodshed. 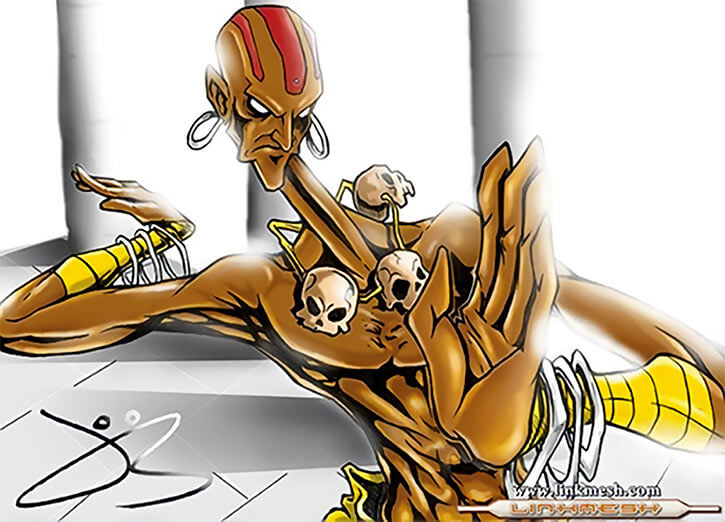 Credit unknown. We’ve had this image for a very long time, and the original seems to have since vanished from the Internet. The linkmesh.com site  still exists though.

(After seeing her meditating husband burst into flames)
Sally: “Dear !”
Dhalsim: “There’s no need for concern. This is a marvel of yoga, a fabricated blaze borrowed from the power of the fire god Agni. It’s alright ! Utilizing this power, opponents won’t be injured more than is necessary, I can likely battle to win.”
Sally: “Your beliefs are surely the proper ones.”
Dhalsim: “If they could this time be continued as fighting techniques for the world battle championship, a lifetime of idleness in India can be overwhelmed with a monetary prize to be obtained.”

“I will meditate and then destroy you.”

Dhalsim can probably be dropped right in as is as there’s next to nothing happening in India anyway. He could also easily be written into a various mystical campaigns given his origins.

Growth is Always On and already figured into STR.

Dhalsim, like all the other Street Fighter Characters, got a huge boost in order to crossover in the Marvel versus Capcom series and go toe to toe with Marvel’s heavy hitters.

On a further note his ending seems to imply that he’s a lot closer to achieving Nirvana or the spiritual oneness that he’s been training for.

Dhalsim was also slightly more powerful in the EX series.

He also had a new move called Yoga Catch which allowed him to stretch his arms out and grow his hands to grapple opponents. That’s Growth: 03, limited to his hands but giving him the normal STR and RV benefits for Grappling/Wrestling purposes.

Flame Projection was slightly lower, to 06.

Dhalsim’s Gliding was upped to 06 and Adrenaline Surge worked with it.

Flame Projection was also a 06 here as well.