The Dharlu is an obscure DC Comics alien, seen in a handful of 1970s Justice League storylines. She first appeared in 1976, but this story was a flashback set in 1970.

There isn’t much usable material. So this entry is more about an oddity than a ready-to-use character. It’s a “hey, remember when the Justice League’s satellite computer was patched using a hibernating pregnant alien ?” curio.

The Dharlu *might* have been inspired by the classic Who Goes There? short sci-fi story.

The Dharlu presumably has no Human gender. But since she gives birth we’ll identify her as female for expediency’s sake.

Also, Diana refers to her both as “Dharlu” and “the Dharlu”. This likely means that it’s her species’ name rather than her name. Well, if Dharlus have names.

The Dharlu’s body seems to be some sort of powder, perhaps like ashes. However, she has some kind of psionicPsionics are sci-fi style psychic powers control over it, and will usually “regroup” as a large, dark grey humanoid with shiny yellow eyes.

When sleeping, she looks entirely solid.

This form is superhumanly strong, large and swift. It can also turn to “ash” (let’s call it ash) as needed, for instance to become a stealthy small cloud.

Furthermore, the Dharlu can detach her fists or her feet yet keep control over them. She’ll keep “strings” linking the detached appendage to her main mass. It’s a bit as if her form had become a hollow doll, with a “skeleton” made of stretchy cables.

This apparently allows for animating detached limbs faster. Since even Superman (Clark Kent) was caught flat-footed by this trick.

The Dharlu becomes immobilised by cold attacks. However, her mind still can run while her body is paralysed – especially if she had overtaken a computer (below). If she’s brought into a more controlled state of hibernation, her mind goes asleep. 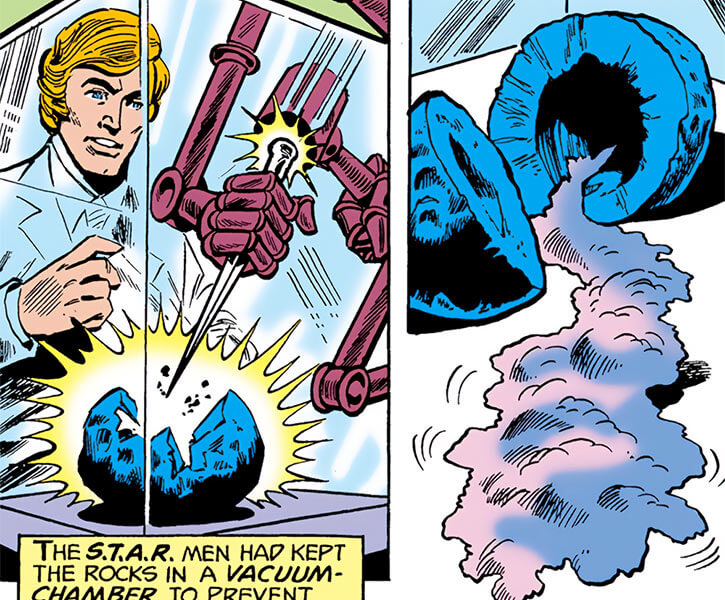 Mind of the alien

When a teleporter accident merged her with the Flash (Barry Allen) and Hawkman (Carter Hall), the Dharlu was dominant in all three resulting creatures. This might speak of a particularly strong mind.

She also could proficiently use their super-powers within seconds, though Flash’s speed may have helped.

The Dharlu has a (psionic ?) sense allowing her to detect spaceworthy technology. This also gave her a sense of how to physically access it.

She seems to have an inborn ability to study, then master alien technologies having to do with space (and hyperspace) flight. This includes many sorts of computers.

Perhaps her most powerful ability is to form a “telepathic tentacle”. This limb can make psionic contact with living beings, advanced computers, and perhaps other forms of sapienceCapacity for intelligent reasoning. 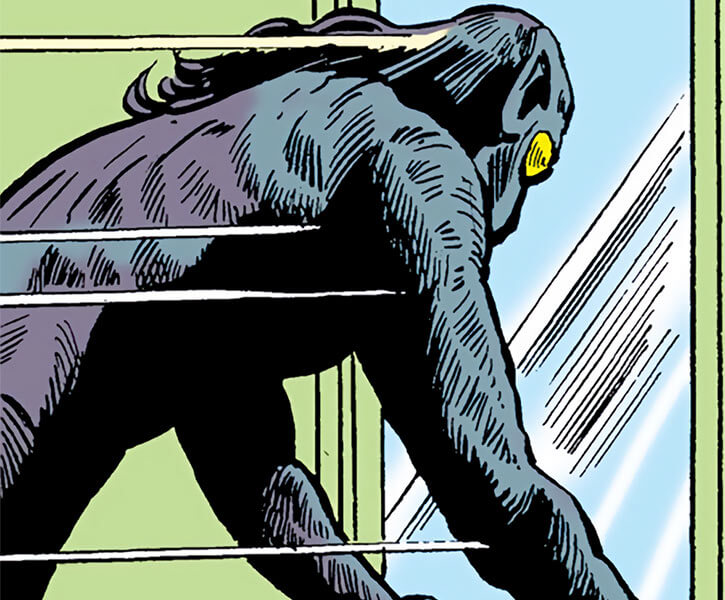 One possible interpretation is that the Dharlu has some sort of super-adaptive power. As such :

However, this is but weakly supported by the story, which mentions nothing of the kind. And may not have been the intent at all. It’s more, like, a pattern.

The Dharlu was discovered inside a meteorite, which seemed to double as an egg. The space rock was brought to the S.T.A.R. lab in Manhattan. But she escaped, apparently killing a researcher.

Then she beelined for the Justice League of America’s brand-new teleporter. Her goal was to reach their satellite and turn it into a spaceship.

The Dharlu sneaked into the teleporter while Hawkman and Flash were using it. This scrambled everyone, resulting in three mish-mash amalgams. But the Dharlu controlled all three. With the Flash’s and Hawkman’s powers added to her own, she was nigh-unstoppable.

Consistently beating back the League, she built a hyperdrive at Flash speeds. Going through the League’s archive at superspeed also taught her the Leaguers’ weaknesses.

Soon, the League’s satellite was rocketing out of the solar system.

The League then discovered that the invader was susceptible to cold. They froze all three bodies, and modified the teleporter to restore the Flash, Hawkman and the Dharlu as three distinct beings.

However, the Dharlu still had part of her consciousness within their computer system. She weaponised the environmental control system to :

However, Superman realised what was going on. He requested information about the Dharlu from the computer. This forced the Dharlu to use her telepathic tentacle, which was already busy paralysing Green Lantern, to silence the computer as well.

The strain from doing both at once stunned her. Superman froze the computer bank with his super-breath. 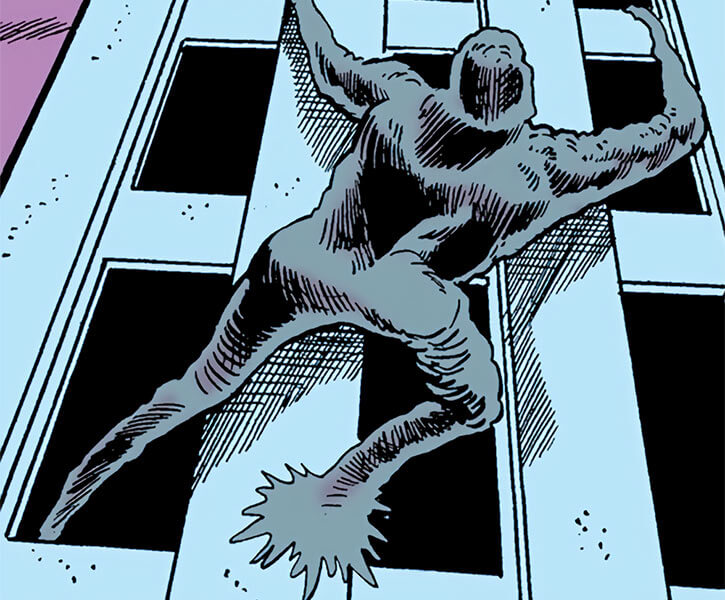 Hawkman then designed a coolant system to keep the Dharlu hibernating within the satellite’s computer.

This mainframe had previously been glitchy. But even a slight contact with the Dharlu’s mind was somehow making it stable.

And thus the League heroically enslaved a pregnant alien in lieu of tech support. A shining example for us all, though we prefer to call it offshoring.

By 1977, the Dharlu was still hibernating within the satellite’s mainframe. But the Grandmaster of the Manhunters shut down the sat, in an attempt to kill Wonder Woman and Flash.

The heroes’ attempts at overcoming this trap failed, until they had but minutes left. Out of options, the Amazing Amazon freed the Dharlu. She knew that the alien still had some superspeed energy left from her merger with the Flash, years before.

Using her lasso, she forced the Dharlu to expend all this energy to destroy the Grandmaster’s trap.

Diana then returned the Dharlu to hibernation, though she swore to free her when feasible. 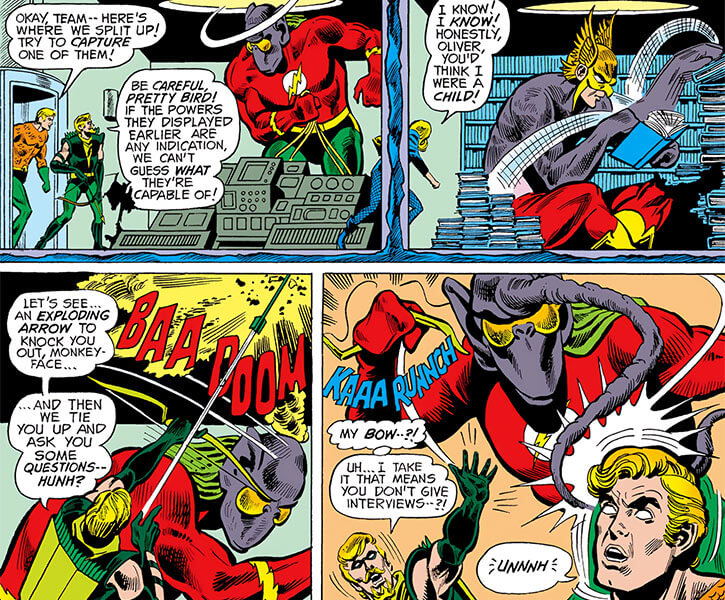 Hacking with the alien

In 1980, the Atom (Ray Palmer) was puzzled to see the JLA’s computer malfunctioning. He shrunk and went in to investigate. He soon ran into a school of Dharlus, also atom-sized.

The microscopic aliens did catch up. One attempted a telepathic tentacle attack, but it was weak and uncontrolled. It only succeeded in giving Palmer a sense of what was going on.

The Atom thus knew that these were the progeny of the original Dharlu. They were attempting to leave the “nest”. He helped them find their way out of the computer, and they shot out into space.

(How that articulates with the Beginning-Place (see below), Diana’s promise, keeping the satellite’s computer stable, etc. was left unaddressed. Perhaps she wasn’t freed in time, and her species dies when giving birth.)

(Or perhaps she and WW worked something out, and the computer was the “egg” for her litter. Diana’s notes about this may have become inaccessible when the computer started malfunctioning, explaining the Atom’s puzzlement.)

The Dharlu was at first entirely driven by a spawning instinct. This was compared to that of a salmon swimming upstream. She was determined to reach a specific space sector to give birth. She expressed this as “the tomorrow-beings shall know the beginning-place”.

The Dharlu just races ahead, getting rid of all obstacles with no regard toward collateral damage. However, she didn’t seem out to kill the League – just keep them out of her hair (in DC Heroes RPG terms, Bashing Combat). It is unclear whether she murdered a S.T.A.R. technician whilst escaping.

But reaching the beginning-place ASAP was her highest, hardwired priority. 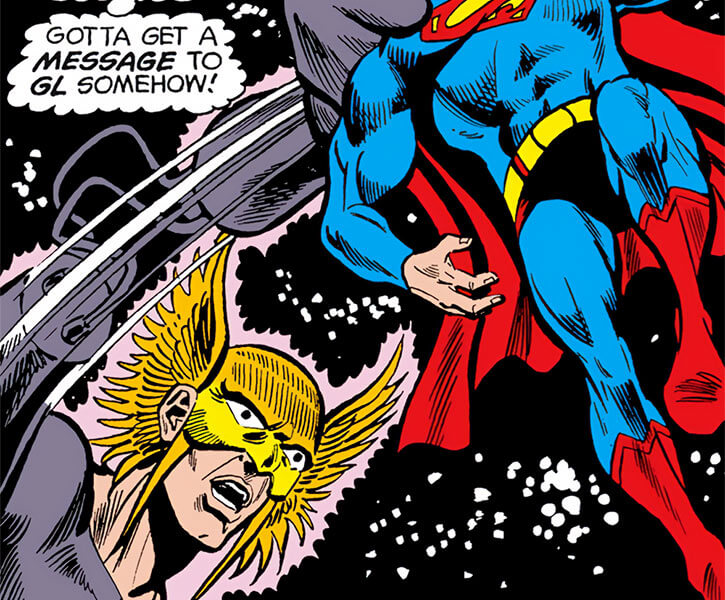 Gadgetry and Scientist are only usable for core functions in space flight. Propulsion, hyperspace shift, computers, astronavigation and the like.

At one point the Dharlu seems to physically knock out Superman, though most of it happens off-panel. The stats assume that she briefly restrained him – then used her telepathic tentacle again.

Speaking of which, I go here with the “Superman has a DEX of 10” assumption.

We have no inkling as to why the Dharlu was dominant when merged with the Flash and Hawkman. So I didn’t attempt to model it. Much like her retaining a “dose” of Superspeed, I’d consider it more of a plot device that’s unlikely to be replicated.

The Vulnerability to Sonics is amusing. It’s Black Canary who delivers the most effective pre-discovery-of-cold-vulnerability attack, but nobody cares. Yet as soon as Superman discovers the vulnerability to cold, everybody considers it *the* solution. 😺 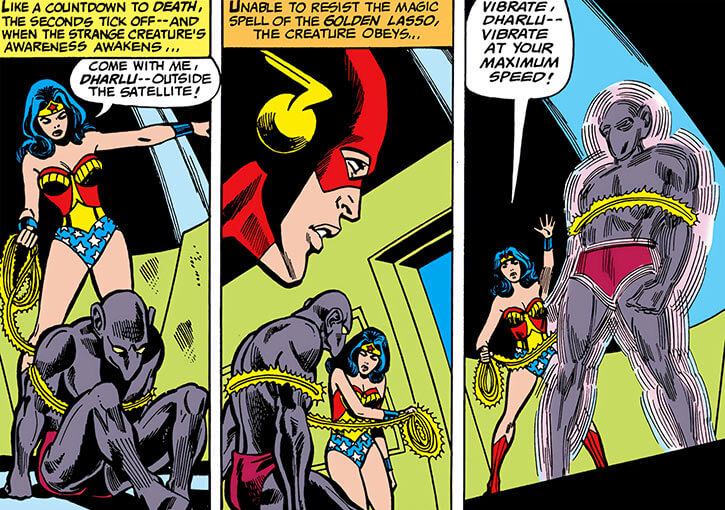 The Dharlu is yet another example of a menace who can facetank the Justice League all by itself. And unlike the previous one, Nekron, she’s not a planet-killer.

This could suggest monstrous stats, which isn’t very good. Furthermore, one notes that Mayfair stats for this sort of characters aren’t tremendous. Oh, no ! Puzzlement !

HPs make the world go round

As I see it, the main factor here is that a character like the Dharlu is spending her Hero Points to accomplish her objective.

The League, in contrast, is barely spending any HPs. It’s a somewhat cheesy Silver Age book, so they know nobody important is going to get hurt.

It also reflects that, in these stories, most of the team seems to be phoning it in. They just don’t do or say much. They act closer to a 1980s children’s cartoon than a lean, highly coordinated heroic machine.

Lastly, it corresponds to a common story flow. The opponent is spending HPs at a good clip, battering the League left and right. But then it runs out and the League suddenly win in the nick of time.

This is especially true for Dharlu, since the story strongly suggests she lost when she finally ran out of HPs. She couldn’t maintain her Marginal abilities anymore.

Stats or no stats

I also strongly suspect that the JLAers and their ilk have lower stats when in most team books. However :

Writeup completed on the 1st of November, 2019.