Diablo II was one of the big video game successes in 2000. It was a genre-defining action-adventure computer role-playing game.

It depicts the combat-heavy, loot-rich journey of adventurers fighting against the return of ancient demons. Yes, it is a sequel to Diablo.

The Assassin is one of these adventurers. Here is a possible, fleshed-out version of this minimal character in order to present some aspects of the game world.

This is Shadows/Martial Artist, claws-centric build early in Act II. See our video game FAQ for more about methods – particularly the addition of material to explain away video game logic.

The lore used in this entry should be current up to Diablo III inclusive.

One of our sample Diablo character profiles, for Guardian of Death, includes a primer about the world, and a quick summary of the main events during the games.

The Chain is an experienced Mage-Slayers combat and stealth specialist. As such, she uses a mixture of advanced martial arts training and psychic powers to do her job.

Like most of her colleagues she fights with claws-like, bladed hand attachments. With the proper training these combine the advantages of armed and unarmed melee combat.

Through concentration Nika can plunge an area in darkness. She usually does this when facing archers – or large groups looking to gang up on her.

She can also hammer something she’s looking at using psychic force, with about the same strength as a snap kick.

We shall assume that she can also protect herself with an invisible psychic force sheath around her body. To explain why she enters battle dressed for a summertime sorority sleep-over. 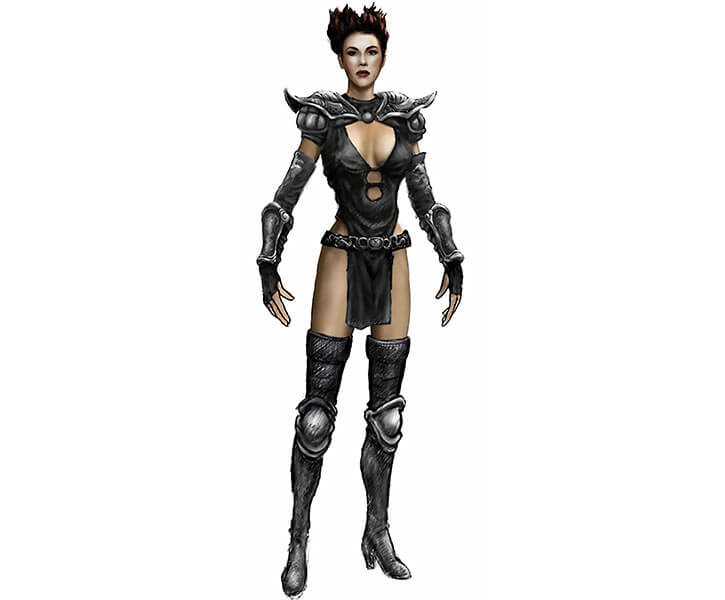 Her most useful ability is draining the life force of those whom she hits. This way she can replenish her own and erase her wounds. This requires specific, kata-like sequences of punches and kicks to “unlock” the life force transfer. Once the transfer is active, Nika’s eyes glow a baleful red.

Another signature ability of the assassins is to have their shadow animate and fight at their side. Even a lone Mage-Slayer can always fight as a duo. The Chain’s shadow is not as strong as she is, but is still a dangerous fighter. Animating it can relieve pressure when pitted against multiple opponents or strong fighters.

A Mage-Slayer’s shadow can be dispersed by hitting it hard enough, but will be able to reform when animated anew.

The 1998 trailer/teaser for Diablo II.

It was the epitome of video game cinematic coolness back then, but 25+ years later the tech looks janky. So I’m gonna cheat a little and link to a neural-network-upscaled version. Upscaling old video game trailers to 4K+ is a thing, and it can be pretty cool.

Clan Vizjerei has historically been one of the most powerful mage clans on Sanctuary. It also was the politically dominant one in the Eastern lands – in countries such as Aranoch and Kehjistan.

Though they are chiefly elementalists, they have been plagued with members turning out to secretly be demonists. Or deserting the clan to become demonists. Great men of evil such as Bartuc were originally Vizjerei.

At the height of Bartuc’s corruption, many if not most Vizjerei mages had become demonists. This triggered a major war with Ammuit and Ennead, the other two major mage clans.

Clan Vizjerei was all but destroyed during these Mage Wars. 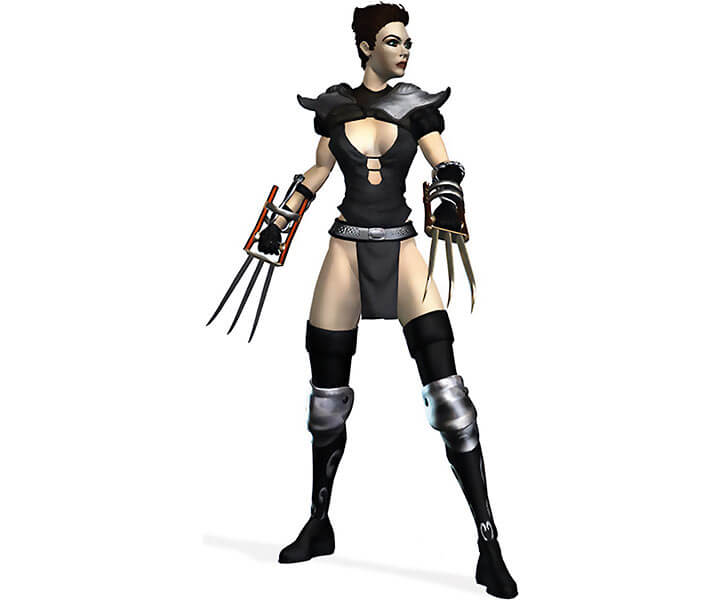 Survivors allied with the forces of Heaven — specifically the Archangel Tyrael — and minor mage clans from the East. They formed a new order, the Horadrim.

The Horadrim then set up a secret police to root out demonic corruption within all mage clans. Their goal was to avoid a repeat of the Mage Wars.

This small clan was named Clan Viz-Jaqtaar. But they are usually called the “Mage-Slayers” or the “Assassins”.

Assassins do not employ any magic themselves to avoid temptation. But they know numerous paranormal and martial techniques to fight and kill demonkin.

Many Mage-Slayer techniques and philosophies are based on the Black Book of Lam Esen. This tome was a study of the Old Religion  , and of the effects of the Prime Evil  on the world. It is thus possible that the Assassins use demon-slaying and corruption-fighting methods from the Old Religion.

However, the Black Book was lost long ago. Furthermore, the Horadrim are now almost completely gone. So even Clan Viz-Jaqtaar can’t tell.

Listen to the wind blow, down comes the night

Viz-Jaqtaar Nika is the daughter of two assassins. She and her three siblings all became assassins. However she’s the only field agent of the lot, the other being support personnel.

She was raised in a hidden Viz-Jaqtaar village high in the Tamoe Mountains, and activated as a Mage-Slayer at age 16.

Her initiatory kill was a madman living in Lut Gholein. He was ranting about how he was demon-kissed, and incoherently trying to summon creatures from Hell. The Clan wanted him terminated in case he stumbled upon something that actually worked.

Nika caught him and hurled him from the top of a tower. The long chain she had wrapped around his neck broke his fall about one metre above the ground.

Running in the shadows

After she sheepishly explained that it was just a bit of harmless flourish, she was nicknamed “Nika of the steel chain” by her family and colleagues. She eventually became known as just “The Chain”.

The Chain has mostly been working solo in the West, south of the Gulf. She has been tracking down suspected demonologists, assessing their activities.

In the slight majority of cases where the lead was good, she murdered them. Each kill generally took months.

Eventually, she heard that the way back to Lut Gholein and the East had suddenly closed. Something had happened at the Rogue Monastery. The mountain pass guarded by the Rogues was reportedly crawling with demons.

Fearing some sort of infernal gate, The Chain called in markers. She rode several horses in quick succession back to the Blood Moor  , to ascertain whether the forces of Hell were indeed present. 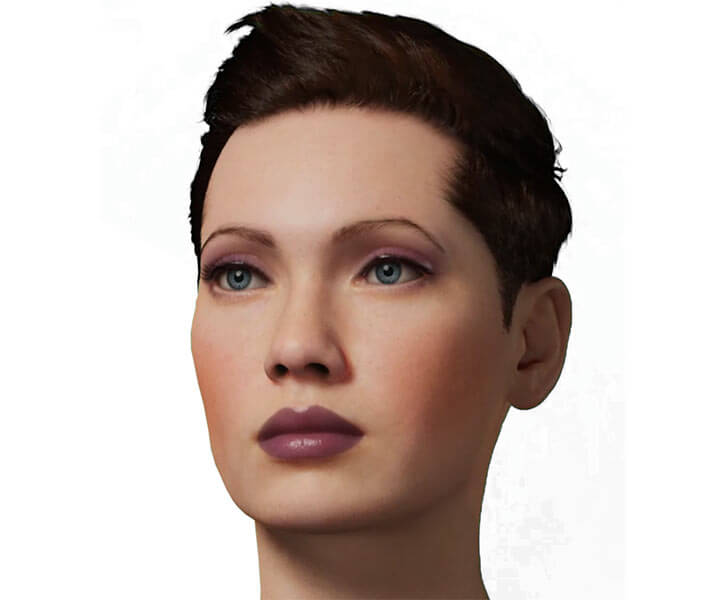 Being a shapely young woman in a heroic fantasy setting, the assassin inevitably wears revealing clothing.

(Long after this profile was done, a remastered version of D2 featured the Assassin class with more sensible clothing, and Asian or Eurasian features). 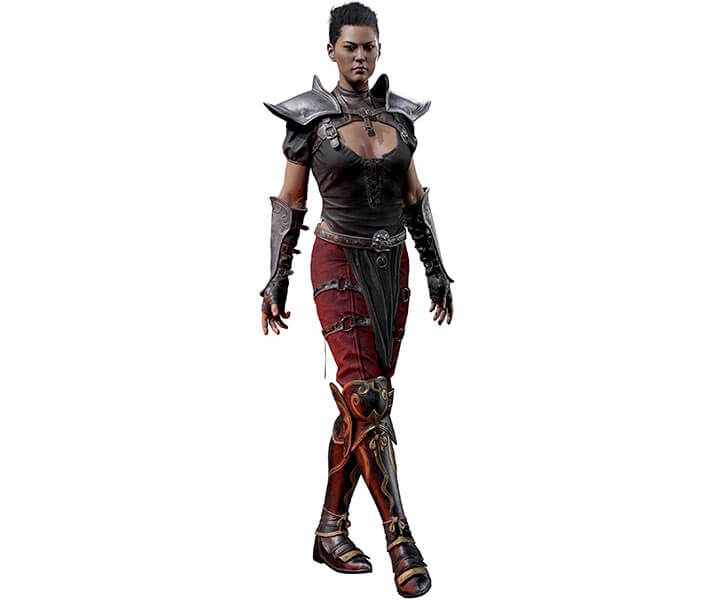 Out of curiosity I set out to make a photorealistic take on the vintage Diablo II model. Using the MetaHumans Creator tech, which as of this writing is in beta. It’s for this specific take on the character – for instance in makeup choices.

I wasn’t expecting to end up with a “Central European new-wave/glam-rock model circa 1987, channelling Annie Lennox” look when I started, no. But oddly enough it works to represent Nika the Chain. I guess that 1980s New Wave is an underused look in grimdark fantasy.

The Chain usually presents herself as charming, approachable… and way less intelligent and more gullible than she actually is. Her usual covers are a merchant’s daughter and assistant scouting for markets ahead of her father. Or a high-end itinerant prostitute.

She gathers information through acting, conning, cold cash and various other streetwise means. Then comes the moment comes to slip into something a bit more comfortable and start physical reconnaissance.

The Chain was raised in a mountain village where most locals were goats. Yet she insists that she’s classy and stylish like a rich big city noble lady. Being skilled at observation she has cobbled together manners of speaking, behaving, dressing, etc. that are actually a good approximation of a real lady in her 20s from beyond the Tamoes.

Her itinerant lifestyle prevents her from having the nice things she’d like to have, though. But she routinely helps herself to her target’s worldly possessions so as to afford the best tavern rooms, enjoy high-end meals, fill her jewellery and perfumes box, take twice-weekly scented baths and the like.

Nika often kvetchesVigorously complaining, at length and in considerable detail. Preferably with wit. about how her job always takes her to awful, dirty places full of mud, soot, rotting corpses, caked blood, muck, zombies, demon trees and the like. All these things smell *horrible*.

“What I kill stays dead.” 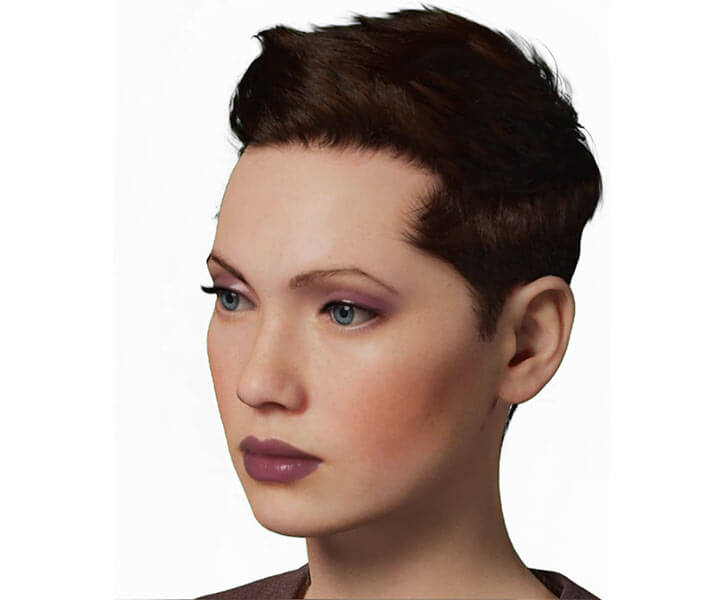 As often with writeups for video game characters the small bonuses from the gear have been abstracted out.

The one-AP defensive powers are the assumed psychic body-sheath, to dispiritedly make some slight sense out of a nonsensical outfit.