Willis Stryker always was feared and reputed throughout Harlem for his skill and speed with knives – both wielded and thrown.

As Diamondback, he further built upon this talent by commissioning the technologist Gadget. Gadget made him trick knives that could prove deadly to even a man with a steel-hard skin. These had warheads of sorts – one exploded, one released a sonic shockwave, one released knockout gas.

Stryker didn’t really have any other skill, being a street kid and criminal used to solving most situations with a blade. But he was ruthless, energetic, enterprising and charismatic.

Willis Stryker and Carl Lucas were two Harlem street kids in the 1960s. They remained close friends through their teenage years. Surviving together in the mean streets, they developed signature fighting skills and matching reputations. As they grew up the powerful Lucas became a feared brawler, and the quick Stryker a redoubtable knife fighter.

In their early teens they ran with a local street gang, the Bloods. The Bloods often clashed with a rival set, the Diablos.

Stryker occasionally got the stubborn Lucas out of trouble by dragging him away from fights they couldn’t win. Nevertheless, Willis was clearly the more vicious and bloodthirsty — if pragmatic — of the two. As they grew up they ended up founding a new, small set – the Rivals. The other two members of the Rivals were fellow Harlem street fighters Comanche and Shades.

The Rivals were likely connected with a Harlem mob, working the street for the more established parts of the underworld.

I dreamt of Reva

At this point, the four youths’s destinies diverged. Lucas dropped out of crime. Comanche and Shades remained thugs. And Stryker was on his way up and making connections.

As Lucas’s and Stryker’s lives veered apart from each other, both men noticed attractive mob moll Reva Connors. Knowing that Willis had the money to treat her much better than he could, Carl renounced dating Connors. In so doing, he also hoped to salvage his lifelong friendship with Stryker.

Stryker’s rackets eventually encroached on Syndicate territory. The Syndicate was a White mob. Since Back then it was Alexander Bont who was considered the “Kingpin of crime in New York” — Wilson Fisk would come later — they may have been part of his empire. The Syndicate told Stryker to stop, but he didn’t heed their warnings.

Willis was thus ambushed by Syndicate enforcers while dating Connors. One of the torpedoes sucker-punched Stryker so he couldn’t draw his blade, and they beat him up. Reva fled to get help and came back with Carl. The hulking young man single-handedly mauled the two enforcers to save his buddy.

The death of Reva Connors

However, Willis was convinced that Carl had sent the Syndicate after him. He assumed that Lucas was jealous of him sleeping with Reva. Stryker spit venomous accusations from his hospital bed, forcing his friends to leave.

Though Stryker may have been a touch paranoid, his fears weren’t completely unfounded. As far as can be determined, Connors secretly admired the stalwart Lucas and despised the debased Stryker. 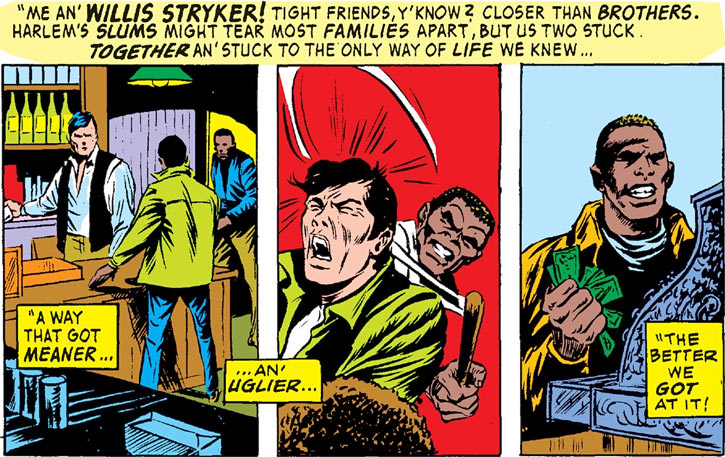 Mad with jealousy, Stryker had a shipment of heroin planted into Lucas’ apartment, then called the cops. After Lucas was arrested, Stryker started sharking around Connors. He told her that he knew ways to have Lucas exonerated and might just do that if she’d resume sleeping with him.

However, the situation between Stryker and the Syndicate worsened. A hit was ordered.

Stryker did spot the car following his own, but it was too late. The Syndicate car closed in and opened fire. Willis did his best to keep Connors, who was in the passenger’s seat, between him and the gunman as a human shield. Nevertheless, he eventually lost control of his car and crashed. Stryker survived, but Connors did not.

The death of Willis Stryker

Stryker continued to struggle against the Syndicate and its killers for years. Eventually, a grudging agreement was reached. He became a loose affiliate of the Syndicate running his own territory in Harlem. Willis continued to work on developing his fearsome reputation, adopting a snake-skin costume and the alias “Diamondback”.

Years later, a free clinic run by Drs. Claire Temple and Noah Burstein started causing trouble for Stryker. He sent his thugs to rough up the doctors several times.

At that point one Luke Cage has started advertising his services as a hero for hire. Temple recruited him to defend the clinic. When Diamondback decided to lead the next raid, he and his men clashed with Cage.

Stryker immediately realised that “Luke Cage” was Carl Lucas. The two men fought, Stryker using his special knives to threaten even a man with a steel-hard skin. In the brutal clash, Diamondback was accidentally killed by his own explosive knife.

A brutal, ruthless killer with a formidable thirst for power. Stryker will do anything and sacrifice anyone to increase his criminal power base. The White guys of the Syndicate are not easy and they tend to look down their nose at him, but he treats them hard in return.

Diamondback has a measure of insane intensity in his deeds and words. This has been the case ever since he was beaten up by the Syndicate and woke up seeing Connors next to Lucas. One suspects that the blows he took that night were a key factor in altering his personality.

“Took years to fight my way into the Syndicate an’ win my own territory. Nearly got killed a couple ’a times, but I kept poppin’ back — gettin’ better an’ deadlier at my specialty — until nobody’s quick to mess with Willis Stryker — aka Diamondback ! They’ve all learned I strike faster with my knives than any rattler !”

“Been workin’ to drive out that clinic… Its drug program is costin’ my pushers customers. Now this Cage joker is messin’ in that !”

* Without Defensive Roll
** When using a knife

For the Multiple Minions, see the New Rules File on writeups.org. 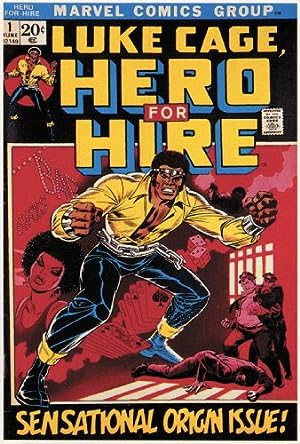 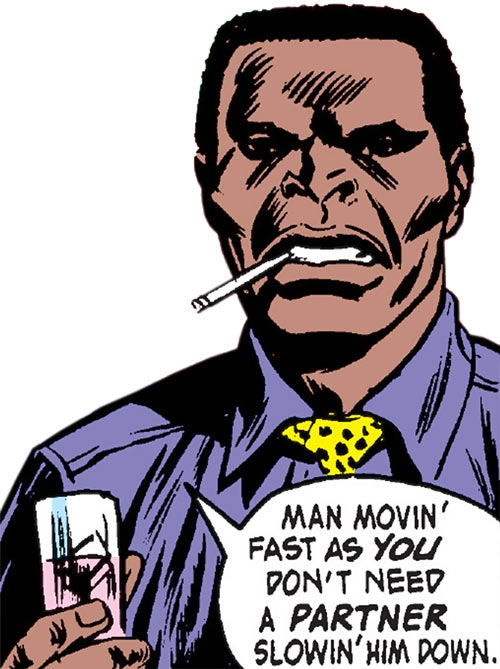