Diamondhead is a rather powerful brick . He’s strong, he’s pretty much invulnerable and his fists hit extremely hard. He’s also a Golden Gloves  boxer, though he tends not to fight as a boxer outside of a ring.

He is direct in combat, getting in close to opponents, and trusting his strength to win the day.

Arch Dyker always wanted to be a great and terrible villain. Even when playing super-hero with other kids, he wanted to be the Red Skull or some other villain. He also beat the kids pretending to be heroes.

He trained up his strength and became a boxer as a teenager, even becoming a Golden Gloves champion. But that was not enough and he remained a relatively mediocre criminal.

His life changed when he sneaked into the South Hamption Science Institute. His plan was to steal some of the pure gems that were used in the laser laboratory. However, he tripped and fell right into a diamond-powered laser beam, which gave him his powers.

Diamondhead then planned how he would reveal himself to the world. He even trained in an expensive “danger room” setup he owned somewhere in Long Island. Howbeit, the room was underpowered for him.

Against the Sphinx, part 1

Diamondhead was one of the Long Island villains who were contacted by the mighty Sphinx and made into his reluctant agent. Then he heard that another such agent, Powerhouse, had been recently defeated by Nova. Dyker reacted by launching a spectacular one-man crime wave, successfully looting banks and money trucks until the police cornered him. 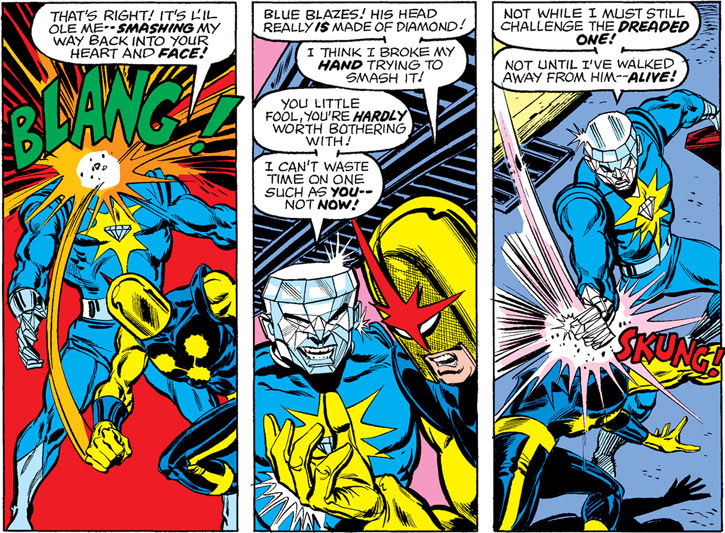 He then surrendered so he could get into the prison, steal the box Powerhouse was carrying when he was arrested, and walk out. Nova intercepted him, but the fight was inconclusive. Dyker escaped. But Nova, underestimating Diamondhead’s might, thought he had been killed by a collision.

Diamondhead was immediately contacted by the Condor. He offered Dyker an alliance against the Sphinx. Diamondhead agreed, and they began working together. They broke Powerhouse out of police custody, and managed to capture Nova when he tried to intervene.

Against the Sphinx, part 2

Condor’s equipment revealed that a spaceship belonging to those who had empowered Nova was hidden in orbit around Earth. Condor decided they should loot it of weapons which could be used against their enemy, the Sphinx. Brainwashing Nova to help them, they modified Condor’s craft to travel into space. Then they headed toward the Xandarian craft.

Nova broke free of Condor’s control while there and battled them. But the trio nevertheless seized some of the weapons and escape.

The three began assaulting the Sphinx’s bases, and eventually came face to face with the Sphinx himself. Their assault failed, in part due to Nova returning to battle them. Afterwards :

Diamondhead was freed when the military used explosives to clear the area for a new base. He returned to New York seeking revenge on Nova. Forcing ordinary criminals to act as bait, Diamondhead trapped Nova by collapsing a building on him.

Leaving Nova for dead, Diamondhead celebrated until he was contacted by a mysterious voice speaking through his television set. The voice (actually Dr. Sun) told him that Nova was still alive. It ordered Diamondhead to capture him. Dyker angrily refused just as Nova and the Comet arrived and attacked him.

Diamondhead beat them. Then he angrily ran off, trying to find the source of the voice in his television.

Unsuccessful in this, he later eavesdroped on a conversation between Crimebuster and the Comet. When they mentioned searching for Nova, Diamondhead stowed aboard Crimebuster’s Crime Pod. He was still on board it when it was transported on board the Xandarian spaceship, now under the control of the Sphinx.

Thus Diamondhead was forced, against his violent objections, to become part of the crew for the journey to Xandar.

They arrived at Xandar in the middle of a Skrull invasion. The Sphinx took advantage of the situation to extract the information he required from the Xandarian computers. The Egyptian absorbed immense power from this. Thus, when Diamondhead, Comet, Crimebuster and the Fantastic Four tried to engage him, he easily brushed them aside.

He then left, abandoning the others. Stuck, the Earth villains joined the Xandarian defense against the Skrulls. Nova, Comet, Crimebuster, Diamondhead and Powerhouse spent several months helping fight the Skrulls, earning the name Champions of Xandar.

During the war, Diamondhead led a battalion of Nova Corps soldiers into a Skrull ambush on Epyrus 7. He then released a banned Xandarian bacterial weapon which attacked both sides.

Nova was forced to disintegrate the victims with a gravimetric pulse. The incident was so traumatic that the he and the few other survivors had the memory suppressed. But Diamondhead, who enjoyed the carnage, remembered.

Diamondhead, Crimebuster and the Comet then accompanied the Nova Corps in their mile-long ship on a foray against the Skrulls. Diamondhead betrayed his team-mates to the Skrulls, helping these board the vessel. Crimebuster discovered this and was killed by Skrull soldiers in front of the Comet.

Immediately, the Comet and all the Nova Corps were banished to another dimension by Diamondhead, who used on-board lifesaving equipment. The bloodthirsty Skrulls disliked this. They blamed Diamondhead for preventing them from killing their enemies. Still, the alliance held.

The ship returned to Xandar. Once past the Xandarian defences, the Skrulls shapechanged and attacked. Nova, Powerhouse and the visiting spaceknight Rom helped the Xandarian civilians resist the invasion. Nova attacked the ship directly, breaching the hull. He then fought and spaced Diamondhead.

After gaining control of the ship, Nova summoned back the Champions and the Nova Corps. The Xandarian forces won and the surviving Skrulls were arrested. Diamondhead was left drifting in space.

Back to the homeworld

Freed from captivity, Diamondhead joined other captives from Earth in a convoy of cobbled together spaceships. This eventually got them home. 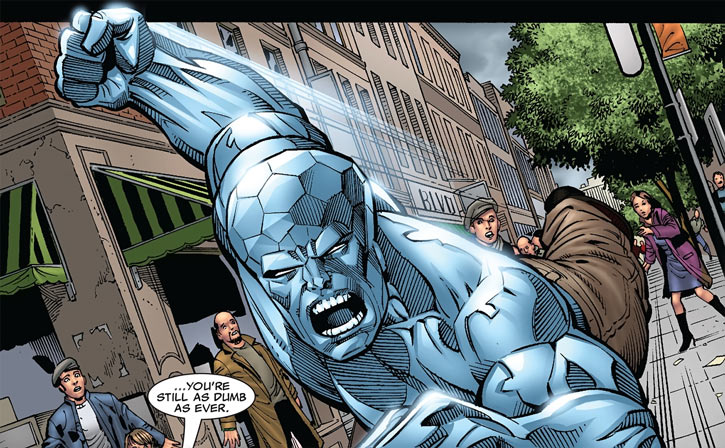 Diamondhead returned to crime, becoming a professional hitman. When he unknowingly killed one of the Corruptor’s agents, the Corruptor took revenge by hiring Nova’s delivery service to deliver an explosive package to Diamondhead. The two were flung out of the building by the explosion and began to battle one another.

Nova overcame Diamondhead. However, the villain escaped after reminding Nova about the events on Epyrus 7. This left Nova stunned when the memories returned to him.

In 1999, the villain ran into Nova again on his next job, fighting him and Captain America. When Nova regained full memory of Epyrus 7 during that battle, he flew into a rage. Borrowing Captain America’s energy shield he sliced through Diamondhead, shattering him into pieces.

Diamonds do occasionally seem to be forever

In 2007, Diamondhead had somehow reconstituted himself – but he was imprisoned at the Raft prison. When Robbie Baldwin was transferred in, Diamondhead and a coterie of prisoners (including Razor-Fist, Justine Hammer and the Grim Reaper) launched a cunning escape plan. However, Baldwin stopped them all.

However, Diamondhead did get free a few months later. By this point Nova had just returned to Earth, and the media provided enough data for Diamondhead to track Rider down. The grudge-nursing Dyker attacked Rider, but his foe was now *far* more powerful and experienced. Nova smashed Dyker’s right hand with an energy pulse, taking him down in seconds.

In 2012, Diamondhead bought a jetpack to intercept Nova (Sam Alexander), as he hated the idea of having a new Nova around. He clearly overpowered his young opponent, until Nova blinded him for hours with a powerful flash of a light. Not knowing what to do, Alexander left Dyker stranded in the desert after threatening to warn the Avengers if Diamondhead attacked him again.

Diamondhead was one of the many, many super-villains successfully imprisoned in the Pleasant Hill rigged reality. In 2016, this project finally broke, and Dyker was of course among the rioters. However, multiple Avengers teams and a major S.H.I.E.L.D. deployment did manage to contain the situation.

Dyker likely escaped them, since in 2017 he again was a Bar With No Name regular. He was seen socialising with the likes of the Shocker, or the successor of the Melter. But with his poor discipline, Diamondhead kept talking about jobs while at the Bar – which was forbidden.

The secret owner of the Bar was by then the Black Cat (Felicia Hardy). She was establishing herself as a dangerous New York City crime lord, as part of a complex undercover initiative. Hardy and her men used Dyker’s blather to keep track of hot jobs, then committed the crimes and took the money before Diamondhead could.

The Cat then escalated to drugging and capturing Diamondhead, to hack off his limbs and sell them. The mostly sedated Dyker would just regrow the missing tissue and could be “mined” on an on. However, Diamondhead’s sort-of-friend the Shocker, with Peter Quill’s help, rescued Dyker.

Diamondhead’s exact appearance varies a bit, even beyond the differences in artistic styles. It seems likely that he puts himself together in slightly different ways when he’s badly damaged.

His costume’s belt occasionally has a diamond logo on the buckle.

Diamondhead is arrogant, and supremely confident in his invulnerability and superior strength. He is constantly amazed when he meets someone stronger than himself. Even if it’s not the first time they’ve proven it.

While he sees himself as a criminal mastermind, he really only has his strength going for him. Thus, his dreams of success often cause him to lose focus on what he’s doing. For instance, while practising in his own danger room, he once got so distracted with his future plans that he was caught by surprise by his own destructroid, which nearly finished him off.

When Dyker has the upper hand he’s ruthless and brutal. But if he’s clearly beaten, he may suddenly feign friendliness and ask for favours, as if it had just been a recreational bar brawl. In many ways he’s a typical thug – self-centred, bad at self-discipline, bad at envisioning the consequences of his actions, really bad at empathy.

“Bah ! I’m already stronger than these fools ! I’m more powerful than anyone ! And very soon the world will know me, and tremble, when they hear… the deadly Diamondhead is ready to strike !”

“There’s no need for words, creep. My fists do my talking for me.”

“Arguing ! Always arguing, kid, you listen or Diamondhead’ll smash you inta the ground. Got that, punk ?”

“I’ve spent my entire life working to perfect my strength — and now nothin’will ever stop the steel-smashing powers of Diamondhead !”

“I told ya, punk — I told ya Diamondhead’ll be the death of ya ! And you just laughed me off, didn’t ya ? Well, I’m struttin’ proud and strong — and you’re pushin’ up daisies ! I told ya, you wuz a punk, kid ! And now I finally proved it !”

“Look at all these diamonds… they’re just like me ! They’re stronger’n anythin’. Nothin’can cut ’em. They outshine all the other crud !”

“Can the hearts and flowers, mister. I’m sick ’a hearin’ ya complain all the time. Ya wanna die so badly, let Diamondhead smash ya one !”

[Explaining his betrayal] “Instinct, kid. It’s the way I grew up, y’know ? Always looking out for number one.”

Bonuses and Limitations:
Acrobatics (Climbing) is a Powered Skill and Contingent Upon STR. 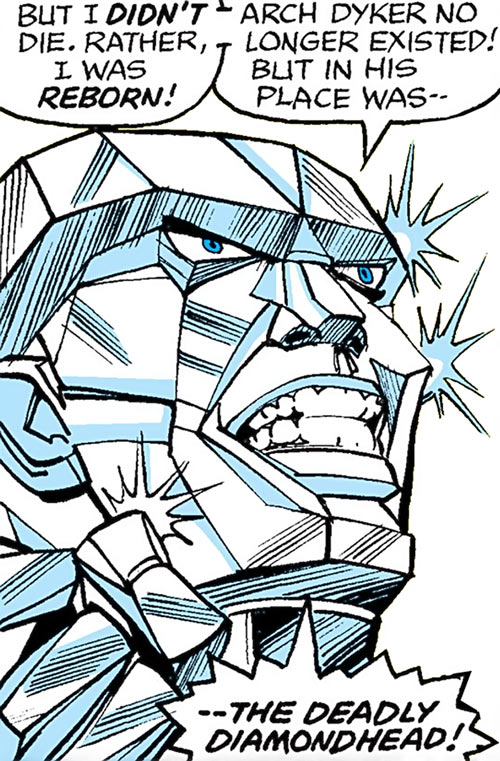 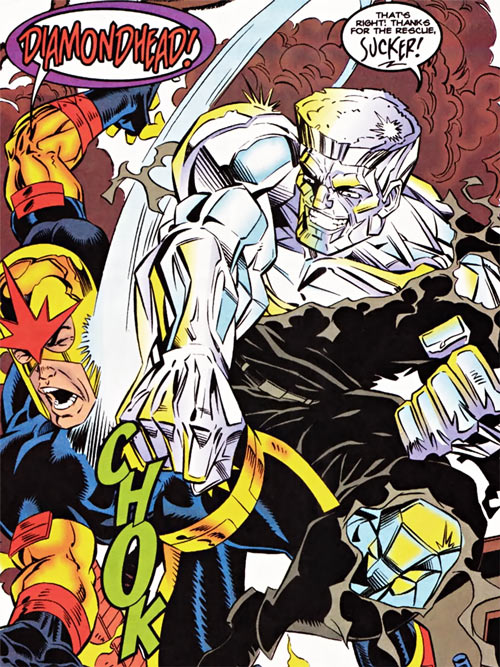 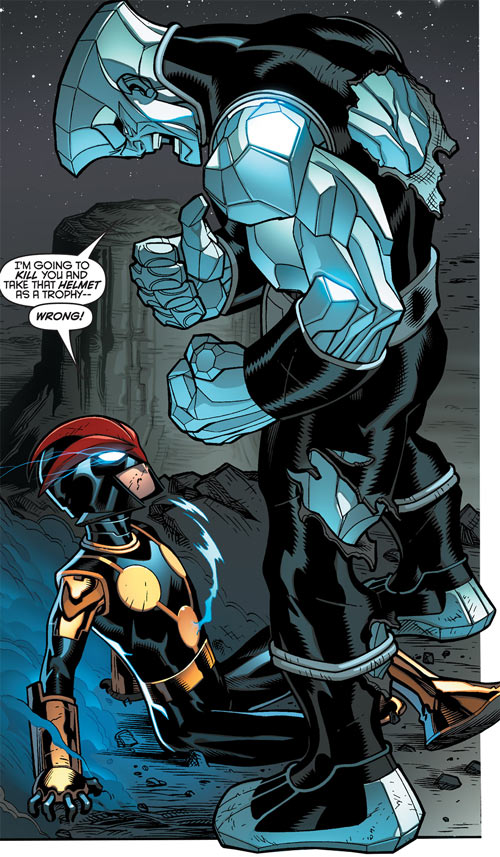