During the 1970s, confectioner and cakes maker Hostess advertised in major comic books. These were full-page comics starring Marvel and DC Comics characters (and Hostess products).

These ads were nonsensical and a parody of the most absurd aspects of Silver AgeSuper-hero comics from the late 1950s to the early 1970s comics. They’re still fondly remembered for their goofiness.

Some stories were terrible, such as this one. But heh, maybe somebody can find an interesting use for these characters.

(For decades the Ding-a-Lings were presented on writeups.org as individual profiles. Which was a bit silly. I finally took the time to make a group entry instead — Ed.).

They appeared in “The Ding-a-Ling Family”. Which was in Avengers #167 among other places.

By some mysterious quirk of space and time warp, the Ding-a-Ling Family is thrust into Thor’s Asgardian orbit. The family leaves behind a trail of evil-doing on Earth.”

The Ding-a-Lings jump from their floating trailer to a spacefaring ark whose occupants include Thor, Sif and Volstagg.

Grandma spots the Thunder God, and says to her family, “By cracky, that purty, yella-haired fella’s the leader… let’s hornswoggle him and the rest’ll be a piece of cake…” 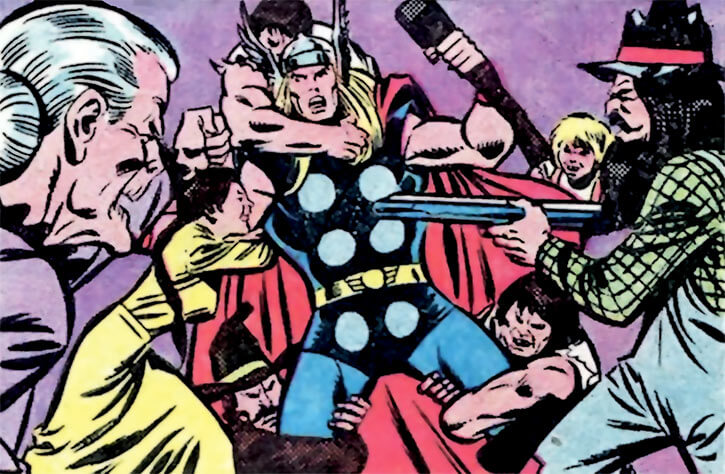 All the family members pile on, and Grandpa shouts, “Hold him still, so ah ken git a bead on ’im with my atomic shotgun.”.

Thor lashes out with Mjolnir, knocking all the Ding-a-Lings aside except for two. Cousin Bee and Cousin Bye resist the hammer blows due to their “cousin power”.

But the pair lets it slip that their power fades when they lose their concentration. So Sif brings out a tray of Hostess™ Fruit Pies.

Immediately, Bee and Bye lose interest in the Thunder God, focusing instead on the fruit-filled goodness. “You fools! We almost had the yella-haired one in our power! Dumb cousins!”, yells Granny.

Thor replies, “Forsooth, m’lady… not so dumb… they knoweth of yon delicious snack…”. As a final word, Sif and Volstagg say, “Now home to Odin. Be sure to save some Hostess Fruit pies for that great one to enjoy too!”.

Good idea. The All-Father can get pretty cranky when he doesn’t get any Hostess Fruit Pies.

All the members of the Ding-a-Ling Family appear to be able to survive unprotected in space.

Grandpa states that his gun is an “atomic shotgun”. We’ll assume that the other shotguns are ordinary models.

Cousins Bee and Bye have a special “cousin-power”. It makes them both unusually resistant to harm… unless they lose their concentration.

Sister has brown hair tied in a long braided ponytail, and wears a tattered yellow dress.

Pa has a mustache, and wears a brown cowboy hat, shirt and overalls.

Grandpa has a long gray beard and mustache. He wears a blue cowboy hat, blue patched-up overalls and a green flannel shirt.

Grandma is a shriveled-up old prune, with silver hair tied back in a bun, and a tattered lavender dress.

None of the Ding-a-Lings wear shoes.

The Ding-a-Lings attack by swarming opponents with their massive number.

Grandma is the leader, and barks out orders to the rest of her kin.

Of course, they all talk with a hillbilly accent, saying words like “hornswoggle” and “reckon”, etc.

Martial Artist also helps represent Sister’s ability at rasslin’. She can substitute the skill’s AP value for his AV/EV when determining Grappling Attacks.

Martial Artist also helps represent Pa’s ability at rasslin’. He can substitute the skill’s AP value for his AV/EV when determining Grappling Attacks.

Bye’s Force Field Protects Power User Only. It expands a maximum distance of about a half inch from his body.

Martial Artist also helps represent Bye’s ability at rasslin’. He can substitute the skill’s AP value for his AV/EV when determining Grappling Attacks.

CIA (Hostess™ Fruit Pies), Loss Vulnerability (Lack of concentration causes Bye’s Force Field power to drop to 0APs. Things that might cause his concentration to drop include character interaction attempts by others, suffering from his Irrational Attraction, etc.), Unluck.