Dingo is a Kindred, an animal uplifted to sentience by experiments conducted by I.O.. He is of canine stock, giving him superior agility, strength and endurance as well as superhuman senses of smell and hearing.

He is particularly trained in infiltration and close combat.

Apparently, Dingo, an I.O. experiment, was stolen by IRA terrorists. They trained him to use his natural abilities for their best interests. After an unknown amount of time with the IRA, Dingo left or escaped to find others like himself.

He eventually met Bloodmoon and the Kindred. He joined them, as they were the closest thing to family that he could get. This was during the time when Bloodmoon was plotting to get revenge on Backlash.

Dingo first met Backlash when he interfered with one of Slayton’s attempt to release Taboo from a FBI detention’s center. His mission was to plant a bug so Bloodmoon could track Backlash.

As Bloodmoon’s Kindred made their move against Backlash and his crew, Dingo came to disagree with their methods. Specifically, he did not want to take a young girl (the then powerless Crimson) as hostage. He turned against his teammates and freed Crimson. He then had no choice but to go into hiding, since he didn’t wish to side with Backlash either.

Dingo then resumed his search for other Kindreds. The closest thing he found was Gramalkin, another human/animal experiment. But he wasn’t a Kindred, as Dingo first thought. In the fight where he tried to calm down the human beast, Dingo lost an eye, and was rescued by Backlash.

This time Dingo agreed to join. He thus now worked for PSI to deal with such threats as Gramalkin (thus walking on I.O.’s toes as far as they were concerned).

Dingo stuck with Backlash, and fought in the first battle against the D’rhan. But not being the kind to stay in one place for long, he left them while they were going for WildCATs’ help, shortly before the creation of WildCore.

Dingo is a short man, with long blond hair and red eyes. His face is clearly animalistic.

He’s an adventurer, working alone, or in a pack if it suits his mood. He’s in a quest for his roots.

However, he’s always good humored, hitting on young men when they come close to him despite being aware of his dismal chances of success.

“Security in this joint’s tighter than a nun’s vow of celibacy. ’Course, that’s never stopped me before”

Dog men, dog men… No, no link to the DCU comes to mind, although there’s always good old Doctor Moreau. The Order of St Dumas did experiment with animal DNA, but he doesn’t look like their handiwork. 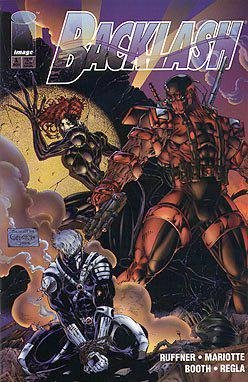 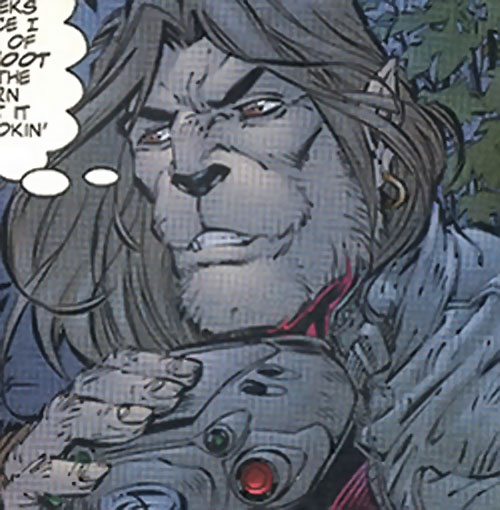