Dino the giant pterosaur is from “War That Time Forgot” tales published during the 1960s.

If you want *all* the context, see our Suicide Squadron profile.

“Dino” is a hatchling from one of the species of mega-pterosaurs found on Dinosaurs Island.

Adult specimen of species within this clade  frequently have a wingspan well over 100 metres (330 feet). This is easily ten times the size of the largest known real-world pterosaurs – and thus a thousand times the weight.

Such monsters could easily rip even the stoutest World War Two military airplanes to shreds.

Dino itself was about six metres (20 feet) tall at birth.

Its bright pink colour suggests that it was a prawn and algae eater. However, it would also eat recently killed animals. And it did not have a beak with a specialised shape, like flamingos do.

Despite still being a baby, Dino could lift several tonnes using its talons, and lose little speed from the load.

It could also hover or glide as needed. Somehow, hovering close to the ground did not produce a massive backwash.

It demonstrated remarkable precision in flight and aerobatic ability. Dino could easily outmanoeuvre other giant pterosaurs, even when it was but a few hours old. Whether this is a trait of its species or an individual gift is unknown. 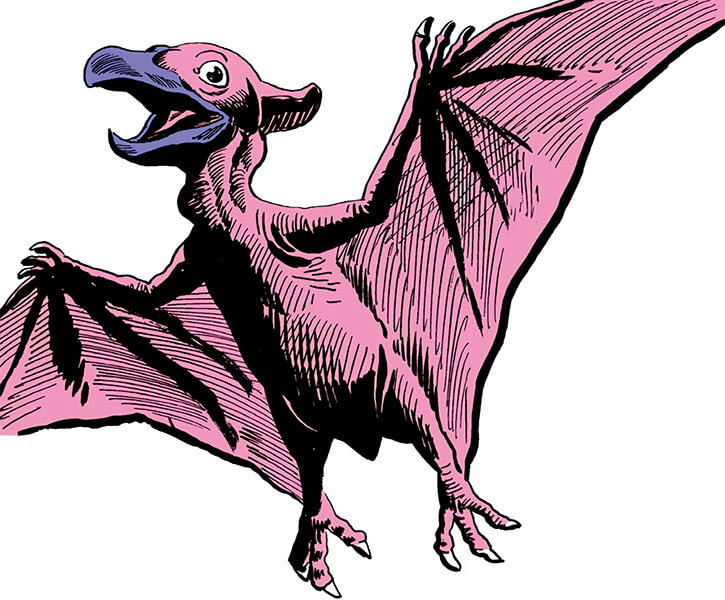 Dino demonstrated extraordinary intelligence. This might not be explainable through conventional means. It could somehow :

One suspects that the explanation might involve some sort of telepathy. Other animals on Dinosaur Island demonstrated an uncanny ability to coordinate their actions, even between different species.

So it wouldn’t be without precedent.

Another sign of intelligence was that Dino is a tools user.

For instance it once flew off to fetch a multi-tonnes boulder with its talons. It then came back and dropped the boulder on the head of an unsuspecting dinosaur.

Its talons seemed unusually well-suited to manipulation, perhaps along the lines of a parrot’s .

Dino could always somehow find his human friends when they were in danger. But that was more a story element than an ability of his.

“Dino” is the nickname given to a baby mega-pterosaur by PFC Mace of the Suicide Squadron.

Mace and Sgt. Morgan were fleeing from a gigantic Dinosaur Island amphibian, and fell into the nest where the baby pterosaur was hatching.

As the two soldiers got up and resumed firing on the monster trying to eat them, the pterosaur broke the shell of its egg. The two Americans were the first living things it saw.

Morgan — who, as every third caption reminds us, has ice water in his veins — wanted to kill the baby. But the more open-minded Mace realised that it meant no harm.

Mace was right. The baby considered that the humans were its friends, especially after seeing the corpse of the amphibian. The infant assumed that they had brought it its first meal.

As a mark of friendship, the baby gently rapped Mace’s helmet with its beak.

The two soldiers left to again face the perils of Dinosaur Island and get back to base.

A mega-pterosaur attack that took place a few hours later would probably have been fatal. But the baby swooped in in the nick of time. It grabbed the humans and evaded the adult.

It then flew them over miles of deadly jungle to a beach. Once there the two soldiers built a raft to return to the base. Mace nicknamed their new ally “Dino”.

The flying reptile beat its wings to fill their sail and help them leave.

Thanks to the rolling sea

It didn’t take long for the humans to run into more trouble, but Dino distracted a sea monster attacking the raft. This bought time for Morgan and Mace to kill the attacker using an uniform belt festooned with explosives.

Apparently realising that the humans would never survive the dangers of Dinosaur Island’s waters, Dino ended up picking up the raft and flying it toward the base.

He was presumably guided by gestures from the raft’s passenger.

Dino stuck with Morgan and Mace when they ran into the wounded crew of a TBF Avenger. These Navy men had been part of a force attacking a huge Imperial Japanese carrier nearby. However, anti-aircraft fire had forced them to land to attend to their wounds.

The two Suicide Squadron men borrowed the Avenger to join the Navy’s attack.

The Japanese forces routed the Americans. Even the Suicide Squad men couldn’t fly close enough to deliver their torpedo, but Dino again helped.

Somehow deducing what its friends were trying to do, the baby mega-pterosaur tore the 2,000 pounds (900 Kg) torpedo from the TBF and flew under Imperial flak to lob it at the carrier, crippling it.

Dino would continue to help his human friends during later missions on Dinosaur Island.

When Morgan and Mace saved a cave boy from a tyrannosaurus, they were soon beset themselves. But Dino saved all three humans.

Dino wasn’t encountered again. Yet, given the time anomalies surrounding Dinosaur Island, that may not mean much.

Interested readers can refer to our Tommy Smith aka Brother-with-no-wings character profile for an alternative timeline for Dino’s contacts with humans.

The art depicts Dino with a very short wingspan compared to its body. This may be to signify that it’s a baby.

Dino is an exceptionally friendly and intelligent animal. It likes being in the company of humans.

It seems to derive satisfaction from helping people, and seems sad when people don’t want to be its friend.

Expertise (Behaviour of things that fly).

Mistrust, Misc.: Dino doesn’t have hands, though his beak and talons give him significant manipulative ability.

When Mace and Morgan ran into Dino again, it was visibly larger. Increase Growth by 03, and raise STR and BOD by three as a result. The Skin armour is lowered by two, though, as it is subsumed by the more efficient BODY increase.

Being larger and stronger, Dino could now fly carrying a M4 Sherman tank on its back (a Sherman medium tank being about 30 tonnes and six metres long).

It was now more than ten metres tall. 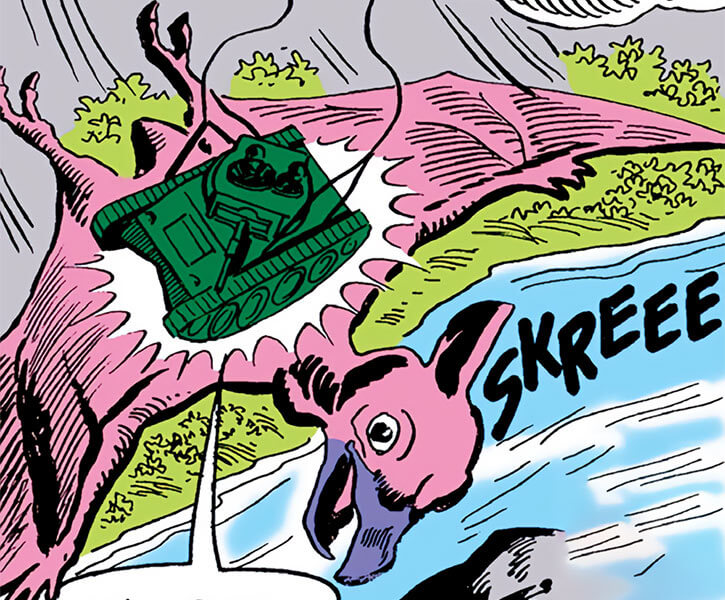 * Without Defensive Roll.
** In the air.

When seen again, Dino was larger. Three Ranks of Growth should work, but also remove two Ranks of Impervious Protection.

Source of Character: DC Universe… in a loose sense.