The Machinist is a highly competent gadgeteer , but he’s not creative. He has to use the plans drawn by an inventor, and never created something on his own. But he’s particularly handy when building advanced tech (even comic book stuff such as force shields) that he can reverse-engineer or build based on plans.

Manolis seems to be able to assemble gadgets extremely fast.

His level of computer science skill is not very clear. Everybody seems to assume he’s a computer whiz, but he’s rather old school. In the stories, he does not do anything a decent hacker couldn’t pull off.

He once demonstrated his skill as an interrogator using torture techniques.

In his heydays, the Machinist was apparently in decent shape. But he later became fat and mostly useless in a fight. Paris later put him on a strict diet and exercise regimen.

Though he’s an unlucky guy who hasn’t gotten much of a break since his Machinist days, Manolis doesn’t actually have Unluck in DC Heroes terms. There is no point at which he inexplicably fumbles a roll.

In his prime, the Machinist apparently carried some macho gear such as body armour and enhanced firearms. While with StormWatch PHD he developed a number of mission-specific gadgets, and eventually his “tech vest”.

This sensors-laden gadget is made of two metallic, clunky sleeves, and a concealed, armoured vest. The left forearm can erect a blue, crackling force shield. While primitive-looking, the force shield could actually take direct hits from the Ferryman.

The vest was heavily armoured enough for allow Manolis to survive a blast from Slaughterhouse Smith without major damage. But such an ordeal is likely to crush and burn the numerous tech parts held in the vest and sleeves.

Said parts can be used to improvise gadgets in the field.

As Manolis regained his confidence, he also added weapons to the gloves – drilling blades and energy beams.

(The chronology for Manolis is odd. Battalion states he fought him “20 years ago” and that Manolis must now be at least 40… But Battalion himself could not have been much younger than 20 during this earliest fight, and was probably older. I suppose Battalion meant “50” and that Manolis is actually in his late 40s. Even though Manolis later states he’s 40).

Dino Manolis was, in his prime, a supervillain called the Machinist. With his long hair, 1980s moustache, big guns, GI Joe armour and flashy technology, he was somewhat successful. He thought he was finally meeting his goal of being his own man.

Eventually he started running into heroes that were more powerful and competent than he was. He also ran into his own limitations. Manolis clashed several times with Battalion during Battalion’s early career. His supervillain career eventually went into such shambles that he retired as the Machinist.

Manolis became a consultant of sorts, selling his technological expertise to more competent and powerful superhuman criminals. Though his services were certainly quite useful, he was not exactly in a good position to demand fair payment. He was now little better than a salaryman.

Worse, he eventually became a retainer to an extremely dangerous superhuman called Slaughterhouse Smith, which terrified him.

It was as Slaughterhouse Smith’s follower than he attended a clandestine meeting of supervillains in New York. Two unlucky police officers inspecting the abandoned theatre where the meeting was taking place. This sparked a terrible massacre in the streets of Manhattan.

The situation escalated into a major posthuman conflict that left hundreds dead. The cowardly Manolis fled the carnage – an act that burned his bridges with Smith, who hated people who ran out on him.

The situation got even worse for Manolis, who was arrested for associating with Smith, a known criminal, during his parole. He finally got a lucky break when Jackson King (formerly Battalion, his old enemy), who was researching the Manhattan massacre, noticed him and offered to bargain.

King’s offer was for Manolis to join his experimental StormWatch PHD unit in exchange for room, board and having his parole violation be pardoned. Manolis grudgingly accepted, feeling like a loser.

But he soon discovered that King and the PHD commander, NYPD officer Doran, did not expect to use him as just an expert technologist.

During their first mission (against the extremely dangerous Russian crimelord, the Walking Ghost), Manolis was used as an undercover agent. He was inserted on site with concealed technology of his own design. His cover was wanting to work for the Ghost as protection from a possible revenge from Slaughterhouse Smith.

The PHD did not nail two major targets. Namely, the Ghost and one of his superhuman henchmen, Dirty Bomb (who had become a supervillain some years before to emulate the Machinist). Still, the operation was considered a success.

Manolis was trapped, though. He was now known as a snitch if not a cop by New York City’s underworld. This left him no choice but to stick with the PHD project.

Perhaps unsurprisingly, things got even worse. Doran, the cop heading the PHD operation, had another PHD operative, the fanatical Special Forces legend Paris, design a special diet and exercise program to whip Manolis back into shape.

The austere and gruelling regimen was tough on the ageing, fat and comfort-junk-food-loving Manolis. But it definitely succeeded in making him a viable field operative again.

His involvement with the PHD project eventually proved a boon. The has-been Machinist could now feel much better about himself and regain his long-lost dignity and sense of competency. Under Doran’s excellent leadership he gelled pretty well with the eclectic team.

Manoli was originally a has-been and a loser, and he knew it. He was but a 40-something geek living in his mom’s basement (where he had set up his Lab). He had no future, and felt a failure due his lack of creativity.

An experienced criminal, he knew very well how to navigate within the mob. But he was forever trapped under the power of parties much more dangerous than himself such as Slaughterhouse Smith, the Walking Ghost or the law.

Though he refused to be overly nostalgic about his days as a 1980s action villain, he felt some empathy with the supervillains and heroes of those good old days. He almost considered Battalion as a colleague. Or at least somebody who would be fair toward him since they shared an history.

As the PHD proved that it could actually walk the walk, the Machinist recovered much of his pride.

As unlikely as it seemed and despite his loudly professed hatred for his “torturer” Paris, he felt he was contributing efficiently to a groundbreaking initiative. He even felt comfortable in the field despite the considerable dangers. He acted like a combat engineer of sort, bringing sensors and tactical gear to actively support his comrades.

Interestingly, as he recovered his confidence, he started becoming what he always had wanted to be as the Machinist. A tough as nails, take-no-prisoners, super-*villain* making his own rules. Yet he was fully working with the PHD and following whatever orders and limitations Doran gave him.

He was comfortable with this since he respected Doran as a leader and a person, rather than his master as his previous, scary employers had been.

In some ways for Manolis, who developed his image as the Machinist in the 1980s, it was comfortable since he felt like a maverick bad boy cop as part of the PHD. It was a familiar and exciting role from the media of this decade, making him feel younger than he is.

Despite being an experienced criminal, Manolis is definitely not a hard man. When faced with violence he much prefers to wheel and deal and whine and plead.

He likes keeping his options open as much as he can. Which is why Jackson King forced him to burn his bridges early on. This character trait, however, receded as he regained his confidence.

He likes to occasionally tell tall, self-aggrandising tales. A favourite is about breaking the heart of the Engineer. But it’s obvious it’s complete fantasy and he doesn’t seriously pretends otherwise.

“Come on, you gotta help me out here. I’ll snitch. I’ll testify. I’ll do anything to get out from under this.”

“Combination of fire retardant foam and the Argonne Laboratory’s radiation-absorbing supergel. You won’t be able to build enough of a charge to explode.”

“You shouldn’t have left me with your tech, pal. It’s like giving me your credit card, social security number, and mom’s maiden name. Guess what, I just shut you down.”

“You’re operating under an unfortunate misconception, Vlad. I may work for the cops, but I’m not a cop. I’m a super-villain.” (starts torturing a captured gunsel).

Bonuses and Limitations:
Superspeed can only be used when making Gadgetry rolls, to accelerate this Task.

Bonuses and Limitations:
OV and RVs of Gadgetry are all raised by 2 CS when attempting to come up with an original design.

Drawbacks:
Dependent (his mother), Partial Attack Vulnerability (-1 CS RV vs. Intimidation attempts, though it seems very likely he has bought off this Drawback by the final issues of the series).

Equipment:
TECH VEST [/BODY/ 06, Claws: 04, Detect (high energies): 06, Energy blast: 07, Force shield: 08, Skin armour: 02, Lab: 05, Bonuses & Limitations: Detect is Discerning, Detect is blind to mystical energies, Skin Armour works vs. energy attacks but only works against energy attacks ; the VEST’s maximum RV against anything is 13 ; Partial Coverage (Vest) ; if Manolis LDDs damage to the /BODY/ of the VEST, the Lab APs diminish by 1 for every AP LDDed until the VEST is restocked].

Before Paris’ regimen Manolis had a temporary Age (Old) Drawback, and all his Physical stats were down to 02. His Initiative was thus a 008. 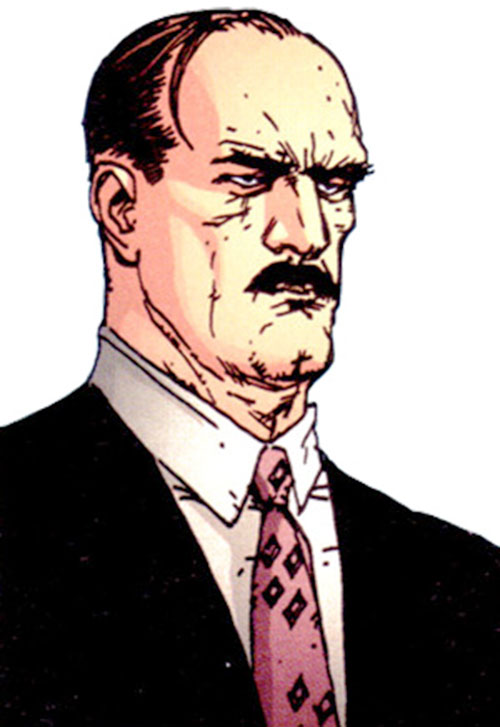 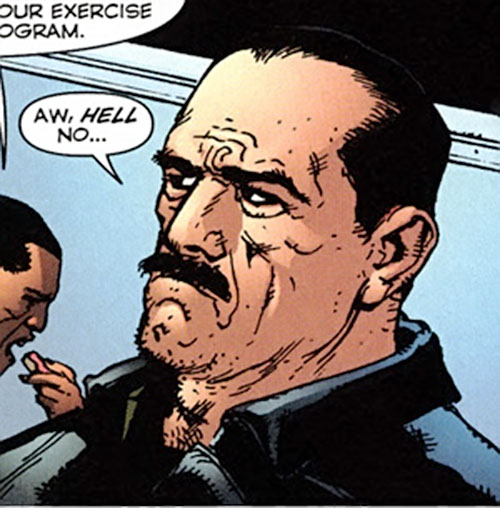 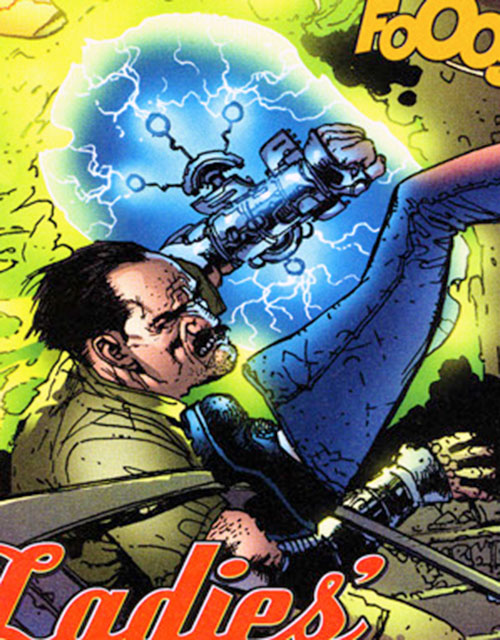 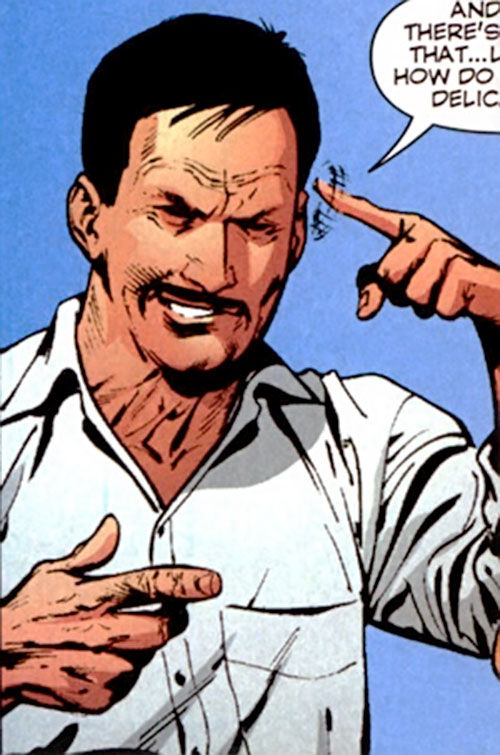 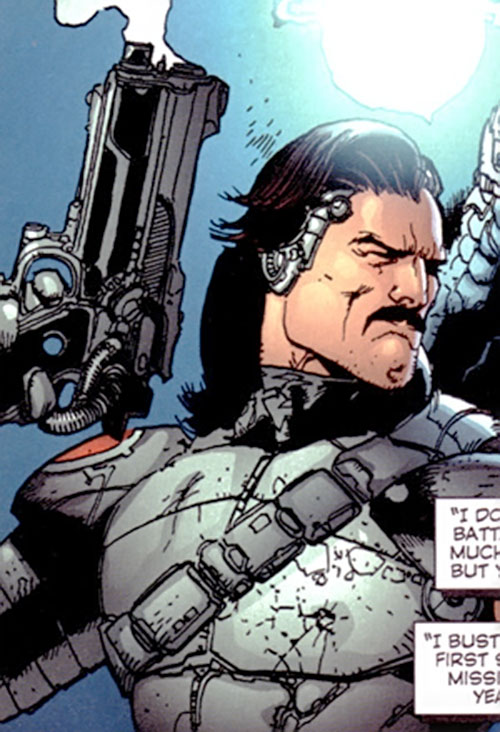 In his youth as the Machinist.