Whenever David Anders experiences feelings of indifference, his body spontaneously undergoes a startling transformation. Once this enigmatic process is over, he greatly resembles a human sized Tyrannosaurus Rex.

The complex transformation takes several seconds to complete. Upon its completion, several hundred pounds of bone, muscle and tissue have been added to his relatively slight form. When unleashed, Dinosaurus possesses a high measure of both superhuman strength and durability.

His raw strength and durability have yet to be accurately measured. But he has proven to be durable enough to survive a nuclear blast and capable of withstanding the assault of a Viltrumite level superhuman for several seconds.

Like a true T-Rex, Dinosaurus possesses extremely sharp claws and an unusually deadly bite. He can easily slice through concrete and/or steel with is clawed fingers. His teeth are deadly enough to decapitate nearly omnipotent beings with a single bite (his teeth have proven to be less than effective against the Viltrumite Thragg though).

Dinosaurus can retain his superhuman form for an indeterminate amount of time. He only spontaneously reverts back to his human form when rendered unconscious.

Despite his savage appearance and countenance in battle, Dinosaurus is a brilliant scientist and master strategist. Every move that Dinosaurus makes is calculated. He never takes a risk that he hasn’t already developed a countermeasure for.

The creature known only as Dinosaurus made its first appearance during the aftermath of Conquest’s assault on Invincible. He attacked the young hero, Invincible, while he was taking part in the clean up efforts after the horrific battle.

Dinosaurus thought that it would prove better for humanity to recover slowly and on its own rather than depending on the aid of the super-human(s) that were responsible for the damage in the first place. Moreover, he reasoned that he actually stood a chance of defeating the young Viltrumite since he was still recovering from the injuries he had received from Conquest.

Like many others before him, Dinosaurus quickly realized that he had under-estimated the strength of a Viltrumite. Their skirmish was suitably brief, and upon its conclusion Dinosaurus reverted back to David Anders who was incarcerated in Stronghold Penitentiary by the authorities.

David Anders remained in the penitentiary until he eventually gave up hope, and stopped caring about his situation. At that moment, he reverted to his monstrous alter ego and escaped the prison.

What happens in Vegas…

Not one to waste time, Dinosaurus immediately moved forward with the next step in his plans. He built a series of explosive devices, and surreptitiously planted them within and around the city of Las Vegas. When his bombs were finally in place, he went on a rampage in the streets, destroying property and drawing attention to himself.

His rampage eventually gained the attention of Invincible who arrived on the scene to stop him. The two exchanged both verbal barbs and physical blows, until Dinosaurus let it slip that the whole point of his rampage was to scare the citizens of Vegas out of their city so that his bomb could destroy it.

His reasoning was simple. The amount of natural resources that were consumed to sustain the man-made city in the desert was unacceptable. Thus he would return it to its natural state, and arid desert.

While Dinosaurus soliloquized, Invincible blurred throughout the city and disabled the bomb he knew of. However, there were nearly 50 remaining bombs. They all detonated at once, wiping out the city and leaving nothing but a giant sheet of glass where the city once stood.

From the ashes of defeat

To his own surprise, David awoke naked in the ashes of Vegas and turned himself in to the Global Defence Agency. He was imprisoned once more. This time he was deep in the bowels of the secret facility that was housed under the pentagon.

In the face of the catastrophic loss of life, the American Government decided not to rebuild Las Vegas (plus, they did not have the resources to rebuild). Instead, the Global Defence Agency used the massive sheet of glass created by the blast to build a giant solar power plant.

In short order, they realized that the plant would be capable of providing renewable power to nearly half of the United States of America. It would also provide jobs for thousands of its citizens; exactly as Dinosaurus predicted when he detonated the bombs.

Invincible saw the good that came from Dinosaurus’s criminal actions. He realized that if guided correctly, Dinosaurus’ intellect could greatly aid all of mankind. He spent days mulling it over, and eventually broke into the ultra-secure facility under the Pentagon and freed the terrorist.

With that, the two formed a pact to aid each other until they changed the world, or until one of them betrayed the other.

The odd duo began to work on changing the world, peacefully. Then Allen the Alien returned to Earth-space with a sample of the Scourge Virus. When Invincible was forced to involve himself in the conflict that ensued, he was infected by the virus.

Regretful of his actions, Allen sought out Dinosaurus’s aid. He left him in the company of Thragg and the Earth-bound Viltrumites in order to search for a cure to the virus.

While he was present on Viltrumite command carrier, Dinosaurus intuitively realized that both he and Invincible were in danger. He surreptitiously planted yet another series of incendiary devices throughout the ship and downloaded the contents of its database into a portable drive for perusal later on.

When he went to check on the condition of his ally, Dinosaurus interrupted the Grand Regent Thragg while he throttled an unconscious Invincible. Dinosaurus let to his ally’s aid, but was mauled by the seemingly undefeatable Viltrumite lord.

The only thing that saved his life, was that the bombs that were dispersed throughout the ship were set on deadman switches that were set to go off should Dinosaurus die.

Thragg eventually left a broken and crippled Dinosaurus alongside Invincible to dismantle the bombs. He had assumed that in his condition, Dinosaurus would be unable to escape. He was mistaken.

Dinosaurus somehow gathered the strength to carry Invincible and himself to a waiting transport, and escape down to Earth. The two crash landed close to Dinosaurus’s hidden mountain headquarters. They were eventually found, and rescued by Invincible’s allies.

While Invincible was taken away to recover, Dinosaurus’s ultimate fate is unknown at this time.

Dinosaurus appears to be a red-skinned reptilian humanoid biped, with a long prehensile tail and the head of a tyrannosaurus rex. His arms are proportioned much like that of a human male (unlike the classic T-Rex) and his three fingered hands and toes are tipped with long razor sharp black claws.

Unlike other humanoids, Dinosaurus has no outwardly obviously sexual organs. Any clothing that he does wear wasn’t created to protect his modesty. He has at times been seen wearing large shoulder bladed constructs or even a metallic cod-piece. But he doesn’t wear a constant set of clothing or any definitive uniform.

Dinosaurus is an environmental activist and terrorist of unprecedented measure. He will go to any means to preserve the planet and its people, even if it means he needs to kill millions of them at a time, in order to preserve billions.

This means that given a choice, he will take the necessary measures to preserve human life. But if taking a life will further his plans, he will do so.

“By saving thousands you have brought about the death of millions !”

“I stand before you now to say you are the old way, Invincible ! I represent a new world order ! Tremble before the might of DINOSAURUS !”

“While I do not feel these people should die, I’m afraid this city must ! I can’t do anything to stop that. This city is a drain on natural resources of epic proportions. The Colorado river will soon dry up. This region can’t sustain itself. Furthermore — if it were destroyed, the area would be ideal for a solar power station large enough to power this country with clean energy, freeing itself from the burden of fossil fuels. You may try to fight me — but deep down, I know you know I’m right.”

Invincible: “You’ve killed so many people, destroyed homes … an entire city…”
Dinosaurus: “All worthy sacrifices for the greater good.”

(In response to the question of why he waited so long to alert Invincible of a threat)
“Those irrigation channels you were digging were far more important in the grand scheme of things. I only alerted you when it was clear we’d be needed.”

(To Thragg while offering his assistance in finding a cure for the Scourge virus)
“I am offering my assistance because Invincible is useful to ME. Can you really afford to turn away someone who is more than likely able to help ?”

Dinosaurus can be inserted wholesale into the DC Universe with no alteration to his back story and/or powers. 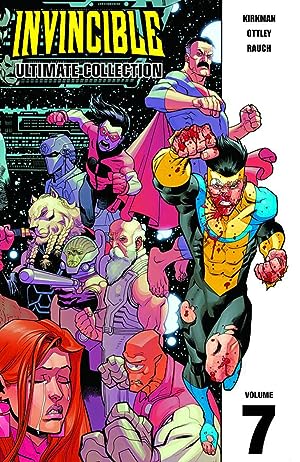 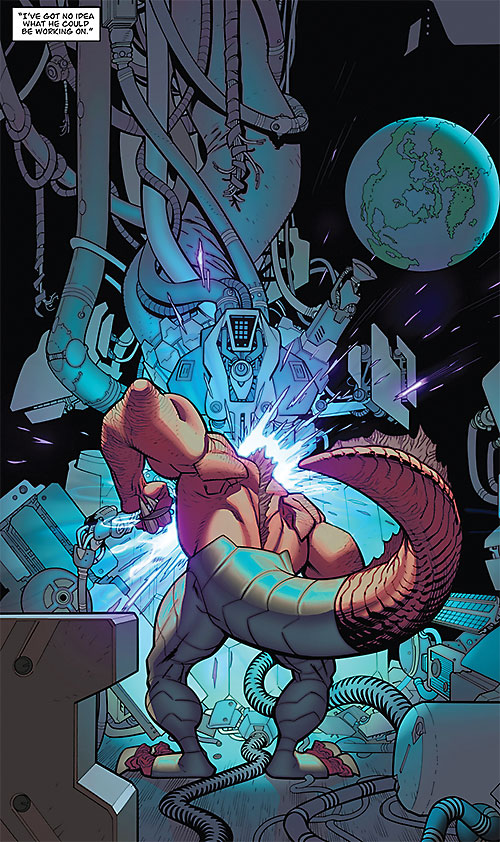 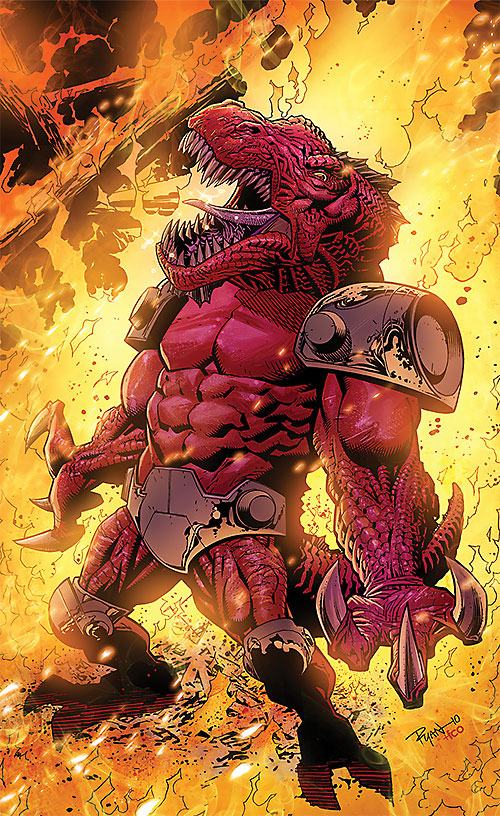 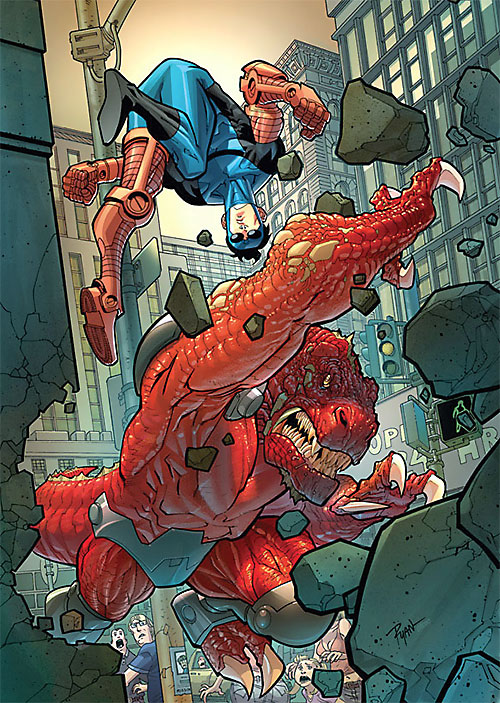 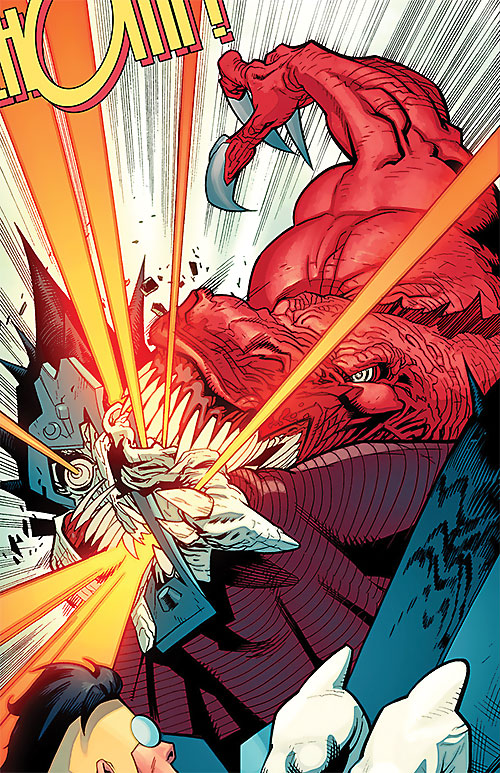 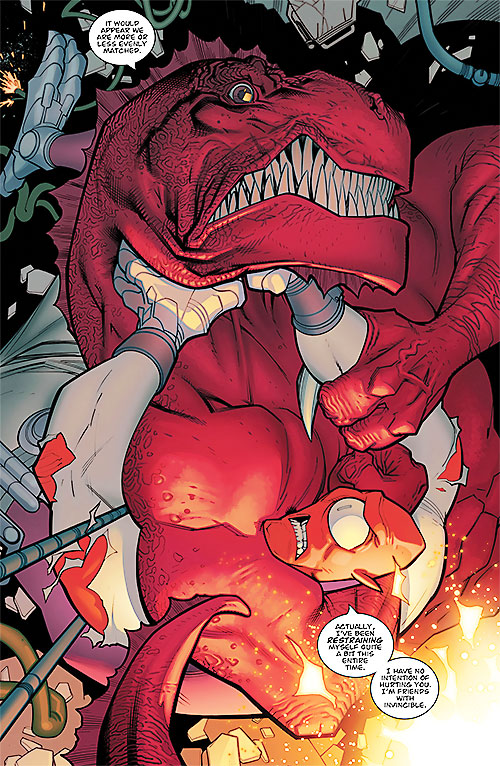 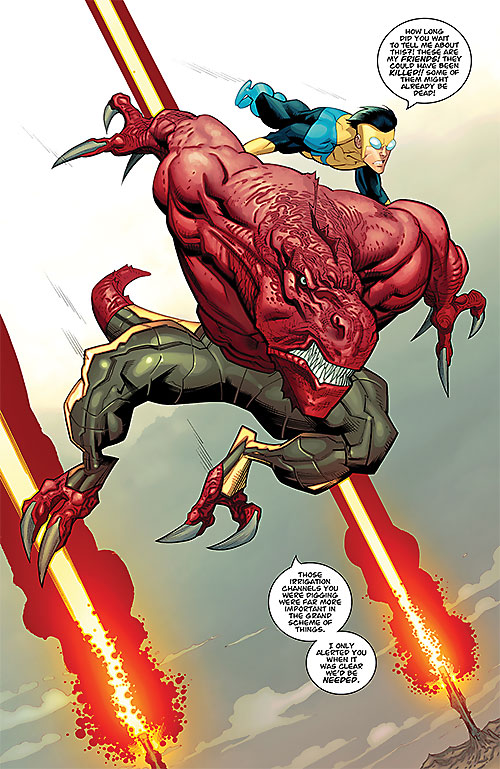