Aberrant was a tabletop RPG published by White Wolf. It was part of a larger universe with 3 games retracing the emergence of superhuman on Earth, from the early XXth century to the far future. Aberrant itself is set 10 years into the future.

The setting featured superhuman in a realistic manner, without Golden Age  and Silver Age  comic book convention. Super-powers had an unified source and significant costs, and the factions were based on credible politics and the reaction of ordinary people to superhumans.

Divis Mal was probably the most important character in the entire timeline.

There is little that Divis Mal cannot do. All of his basic human functions are enhanced to high superhuman levels, including thought, reflexes, strength, and endurance. He is nearly immune to any possible physical or mental attack and can survive the rigors of space.

He can cause latent Novas (Aberrant Universe superhumans) to “erupt” (and, to a limited extent, control the nature of the eruption). He can also shut down the power of an erupted Nova for as long as several weeks at a time. In addition, unlike most (less powerful) Novas, his latent power is so high that he does not run the risk of burning out his powers with use.

He has extraordinary control over plasma – he can:

on a level not seen anywhere else.

Beyond his control of plasma, Mal can control other forms of energy on a level that makes it possible for him to black out entire cities. He can even control time, speeding it up or slowing it down in limited zones of influence.

Divis Mal’s control over and knowledge of his M.R. Node (Mazarin-Rashoud Node – the extra part of the brain which gives Novas their control over Quantum Energy) is so deep that there are likely no (non-Mystical) powers that he cannot, given time and effort, develop through force of will.

Divis Mal is undoubtedly the single most powerful Nova witnessed on Earth, tossing Team Tomorrow leader Caestus Pax around like a ragdoll.

Michael Donighal was born in 1900. During the 1940s he helped found the Aeon Society, under the name “Doctor Primoris”. He experimented with inducing superhuman powers, decades before the Galatea incident – the destruction of the spacecraft in Earth’s orbit that served as the catalyst for worldwide Nova eruptions.

In 2003, under the name “Divis Mal”, Donighal joined a group of Nova revolutionaries and intellectuals. They believed that the future of Novas lay not in coexisting with “baseline” humans but in transcending them and in making their own rules.

With the assistance of his longtime lover, Jeremiah Scripture, Mal rapidly took over the group. He became their spiritual leader and guide. Scripture became the leader of the “Cult of Mal”, those Teragens who find Mal’s philosophies to move into the realm of religion.

Mal released the Null Manifesto, publicly declaring his political and philosophical views to the world. This instantly earned him the enmity of Project Utopia and Team Tomorrow (T2M).

Over the years, Mal perfected/came to understand a process he called “chrysalis”. It involved extended hibernation while simultaneously embracing “taint” (the distinctive physical deformities that often accompany eruption and/or extensive power use). He has undergone this process at least 4 times (by the peak of Nova activity).

After the Aberrant Wars, Mal was the last “Aberrant” (the new term for those beings previously known as Novas) to leave Earth.

Divis Mal is a tall, handsome redheaded man dressed in a red and gold costume.

Divis Mal is a visionary, a revolutionary, and a terrorist. He believes that Novas are the next evolutionary step, FAR beyond humankind. He looks to lead the Novas to the next level, socially, politically, and spiritually.

He sees all Novas as his children and abhors killing them, or for that matter, shutting down their quantum powers. This is a punishment for his “children” that he finds far too severe.

During this point in his career (prior to the Aberrant Wars), he still shows a “human side” in spite of undergoing the “Chrysalis” process at least 4 times. It is only known to his closest confidantes though – especially his longtime lover, Jeremiah Scripture.

More than any other Aberrant Nova, Divis Mal is difficult to transplant into the DC Universe. The Teragen movement and the politics/philosophy of evolution are even more radical in many respects than Magneto and his groups in the Marvel Universe (and certainly more widely accepted).

He might be somewhat more appropriate in the 30th Century fighting the LSH, but even that would take some serious adjustment.

Advantages:
Iron Nerves, Life Support (Total), Omni-Connection, Scholar (Nova physiology/biology), Stabilization, Miscellaneous – Divis Mal’s control over and knowledge of his M.R. Node is so deep that he can develop any Physical or Mental Power (including Skills as Powers), assuming that he has enough Hero Points accumulated.

Drawbacks:
Authority Figure, Mistrust, CIA (promoting the cause and evolution of Novas).

Source of Character: Based on character from Adventure/Aberrant/Trinity (White Wolf Games). 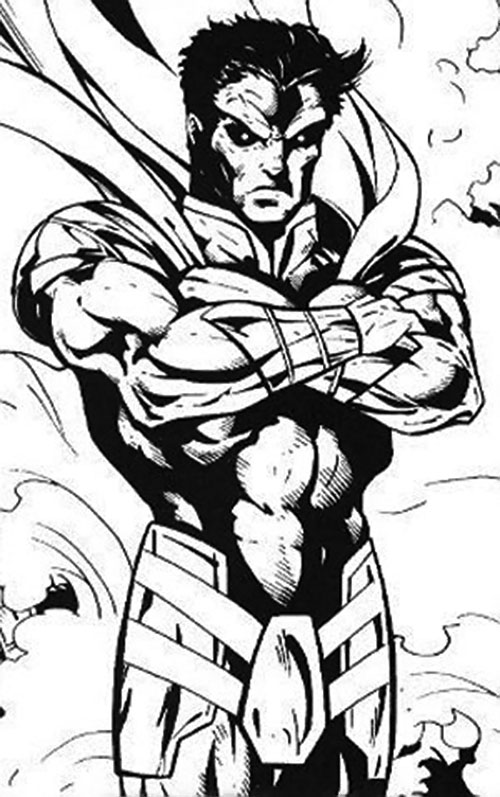