Rottweiler seems to have the same abilities, but is nowhere near as strong or competent.

A highly paid mercenary, the origin of Doberman, or his flunky, Rottweiler, is unrevealed. He is first heard of accepting a job from Mars Dragonryder to abduct his wayward daughter, Nikita, and return her home.

For this mission he seems to be leading a large army of mercenaries, most of who seem to feel any particular loyalty to, or fear of, Doberman.

Doberman snatched Nikita with relative ease. The only obstacle was her boyfriend, Rascal. Rottweiler stayed to deal with Rascal while Doberman took Nikita back to the warehouse base they were working out of.

Rottweiler is unsuccessful, however, when Midnight Devil, who happened to be passing through, comes to Rascal’s aid. The pair left him tied up under a pile of rubble after a random super-powered battle passing through collapses a wall on him.

Doberman handed Nikita over to her mother, Shannara’s, care at the warehouse. But Mars offered to triple his fee to 30 million dollars if he’d accompany them safely to Dragonryder Island.

He agreed, but a couple of the less loyal mercenaries heard this, and when Rascal and his team, Strikeback, attacked the warehouse, the mercenaries took advantage of the situation to abscond with Doberman’s “bone&”. Doberman soon realised she’d been taken, and sets off in pursuit.

Rottweiler had freed himself in time to reach the warehouse while the battle was ongoing, but his attempt to get revenge on Rascal is foiled when Sherman blows him 200 yards through some walls. He manages to recover enough to sneak onto the wheel units of the mercenary ship Strikeback take to follow Nikita, but falls asleep on the flight, leaving him late to catch up to them later on.

Doberman caught up to the fleeing craft above the Grand Canyon. Meanwhile a couple of Strikeback members, who’d managed to sneak on board, killed the mercenaries, only to find themselves without a pilot. Doberman managed to use his craft to avoid them crashing too badly, so his “bone” didn’t get injured. He and some of his more loyal mercenaries then gave chase to the trio. 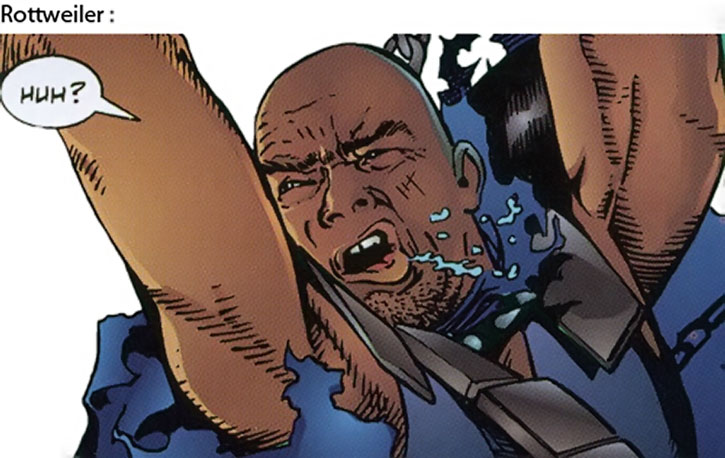 Cornering Jade Cobra and Nikita, he easily dispatched Jade, only to be caught from behind by Midnight Devil, and sent falling into a canyon. He climbed out in time to end the fight, and was about to get revenge by throwing Midnight Devil into the canyon. But he was stopped by Shannara Dragonryder, who insisted the prisoners be all be brought in alive and (relatively) unharmed.

Reaching Dragonryder Island, Doberman settled down to happily count his money while waiting for his ship to be refuelled. The rest of Strikeback arrived soon after, attacking the complex, and accidentally releasing the gargantuan Monster X to enter this dimension.

Rottweiler woke soon after arrival, and caught up to Rascal in time to find his back exposed. He pounced on him, only to find his attack knocked Rascal out of the way of the attacking Monster X. The creature instead chomped down on Rottweiler, swallowing him, but probably not killing him.

Realising they had few options available, and that his missiles could not do much against Monster X at such short distances without better guidance, Mars Dragonrider offered Doberman a further 75 million dollars to pilot one of the missiles down Monster X’s throat. He accepted, and successfully piloted the missile, killing the monster.

Presumably both Doberman and Rottweiler got out of the monster at some later point.

An aggressive and determined mercenary, Doberman prides himself on never failing a contract. Likewise, he won’t tolerate anyone who gets in his way (trying to take his “bone” from him).

He’s utterly fearless in combat, trusting to his invulnerability to keep him alive. Radiating absolute confidence, Doberman expects his commands to be obeyed by anyone who isn’t paying him, and accepts little insubordination.

Rottweiler is more arrogant than confident. He seems to always feel the need to prove himself, leaving him constantly aggressive and in people’s faces.

“Nobody steals a bone from Doberman !”

“Dis guy’s gonna be a pest. He ain’t gonna give up. I tink we’re gonna have to snuff ’im.”