Doc is a powerfully augmented cyber-genius. He has superior intellect and skills.

He possesses the ability to control machines and data in the data flows of his world. When it comes to electronics and data there is little he can’t do.

Beyond his mind Doc Hartford is a Galaxy Ranger and a gunfighter of reknown, even in a world of gunfighters.

Less is known about Doc than several of the other Rangers. His Skills and position imply more than is known factually.

It is known that Doc has served as a Series5 Ranger on the new frontier for several years and has the trust of the rangers around him and their command.

Doc is a good looking Black man in a Galaxy Rangers uniform. He is often seen with his spectral ‘tweakers’ floating around his head and a remote in his hand.

[Extremely 1980’s sounding theme music]
No Guts, No Glory
Somewhere in the future
Far away from here
Trouble is waiting
On the last frontier
Into these worlds of unknown danger they ride
They’re the Galaxy Rangers
Heroes in the sky
No Guts No Glory
No Pain No Gain
One for all
all for one
Riders on the range
No Guts No Glory
We’re taking a stand
Ready to prove it again
No Guts No Glory

Doc is good and he knows it. He is an unrepentant Don Juan, an electronics genius, computer hacker extraordinaire. Doc is almost Spider-Man-like in the way he always has a quip or a wisecrack for a tense circumstance.

When the chips are down Doc is focused and goal oriented. He is true hero material and can be relied on to the last inch of his life. Doc is a smooth ladies man and a real player‘. He will always go out of his way to charm fine ladies when ladies are available.

[To Goose] “Always a pleasure doing business with you, my Gooseman.”

“Pardon me. You don’t know me well enough to stun me.”

“A manual lock. Talk about primitive !”

Generic Space Villain: “You don’t really expect us to hand you the galaxy on a silver platter, do you ?”
Doc: “Why I’m sorry I became a Galaxy Ranger, reason number 62.”

[After recovering Shane’s mutated form and attempting to correct his implant] “Lifeline… Go inside and deactivate the implant.”
Lifeline: “Right, Doc !”

The Year is 1986. Super Villain Technology has started to appear in the main stream. Lex-corp, Wayne-tech and several others have released commercial interstellar craft based on several different designs. A diaspora ensues. Humanity, Meta-humanity, mutants, clones and super beings spread to the stars with normal men. Aliens were there waiting for us.

The Year is 2086. Many strategies of law enforcement have been tried and failed in the new worlds of men. Super-troopers, Cadmus grown clones and Human police forces have all proved insufficient. Between the Mega Corps and the sheer variety of life and conditions an elite and powerful cadre was required. The Galaxy rangers were formed.

The Rangers were largely recruited from power-beings who could be augmented by the technology of the Rangers. Some were aliens; some were Meta-gene-active.

Doc Hartford is a mixed race, mixed genetic descendant of Barbara Gordon and an unknown Tamarian warrior at different points in his lineage. This has given him a bright mind, fast reflexes and unquitting good looks. Unfortunately none of the Tamarin super powers descended to him. Doc Serves beside many other mixed genetic children of an earlier age as a Galaxy Ranger.

Drawbacks:
MIA to charm and etiquette; SIA (Getting the girl).

Drawbacks:
CIA (Protect humanoids) the cyber steeds were programmed with Asimov’s laws and will protect human life even at the expense of their own.

Triton is Goose’s Cybersteed. It is very devoted to him and very Zen. It is silver in color and implied to be a advanced model. The Cybersteeds are capable of independent thought as they have demonstrated carrying out specific actions for their GR riders when NOT ordered to do so, and some even engage in friendly banter with their respective GR riders (Personality Chip maybe?).

A common Gadget in the GRU is the Memory Bird. It is AN AI with no Physical stats that live in their version of the internet. A Common memory Bird would be: INT: 02 WIL: 02 MIND 08 INF, AURA and SPIRIT 0. Data Storage: 06, Spirit Travel (SL): 02.

Some of these data constructs over long periods of times develop personalities and even something bordering on sentience (Mystical’s above zero). Some of them develop other powers in the data stream. Lifeline is one of these.

Tweakers are Doc’s custom memory Birds. He uses them to gather information (remote sensing Electro telepathy, interface, etc) or as tools for gadgetry.

Memory Birds and Tweakers can appear in physical space as a bright spot of light. It is worthy of note that Doc Hartford has access to a hidden Memory Bird with the Super Trooper formula in it.

For purposes of game play assume doc has 2 6AP type B Omni-gadgets as tweaker abilities.

Doc Hartford will (MIA roll) allow his motives and actions to become complicated by a lady he has just met on a given leg of an adventure. He will not betray his principals or the other rangers, but he will get himself in trouble by doing this.

By Mike Winkler and Pur_see_i8.

Source of Character: The Adventures of the Galaxy Rangers cartoon series (1986-1989). 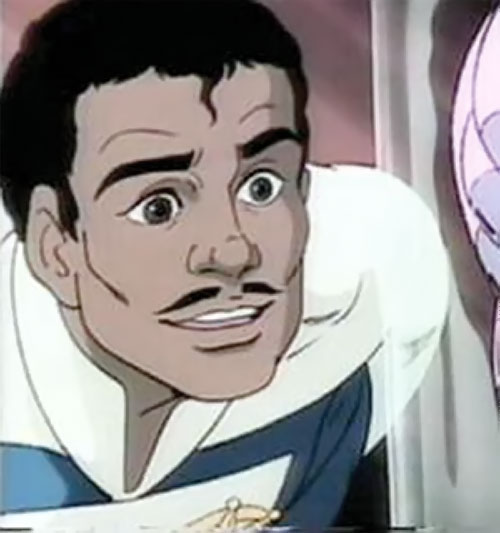 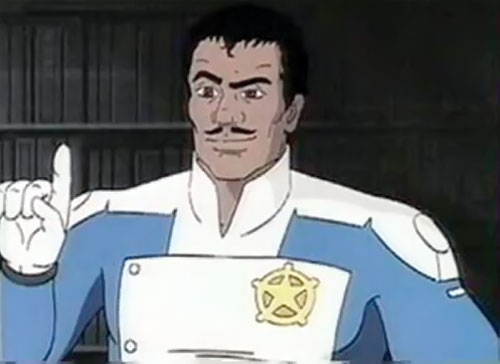 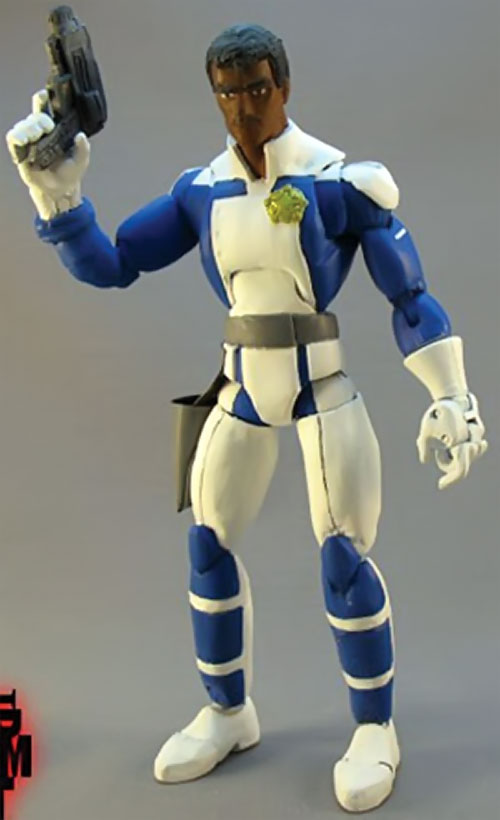