Dr. Apocalypse was created by the then-obscure Bill Willingham as a master villain type for the game. He was thus the big bad in two adventure modules.

Except for his superior intelligence and willpower, Doctor Apocalypse gets all of his super-powers through the mystic gemstone that is grafted into his forehead. Using the raw supernatural energy that he draws through it, he is able to manifest within himself any superpower he desires.

He must always maintain perfect and total control over himself or the demon beings from the other dimension will regain control over him and the gemstone, flooding this world with their vile hordes.

For this reason he must be extremely careful with the amount of power he uses; limiting himself to no more than six super-powers at any one time. Any more than this and even he might not be able to contain the eldritch energies unleashed.

The six powers listed in our game stats are his favored powers. Note that he cannot switch powers instantly. It takes from one to six days of intense concentration to manifest a new ability.

From as early as he can remember, Pietor Apoucalos was unlike anyone else he knew. Although by all appearances a totally normal child, he knew that he was markedly different from everyone else, different in a way that neither he, nor anyone else could exactly determine yet everyone could recognize. Pietor Apoucalos did not belong in the human race he was born into.

From earliest infancy his parents had little to do with him. He was always under the care of a nanny or some other surrogate and spent only the amount of time with his parents that they felt they were “correctly” obligated to spend. As soon as he was of age, his parents sent him off to private schools during the year and recreational camps during the summers.

The differences that set Pietor apart from all others continued all through his childhood. He was always able to understand humanity perfectly in the way that a sociologist can understand a community he is studying better than its members can, because he is on the outside and uninvolved in it. Human beings were a part of his environment, no more or less than rocks, grass, trees and weather.

It was not until his college days that Pietor Apoucalos first found anything to draw him into a connection with the rest of humanity, that being the study of human history and anthropology. He studied these subjects with a fanatic compulsion believing that somewhere in the forgotten past of human culture was the secret of his own condition.

This was the first major step in the path towards his long predestined fate.

The next major event that shaped the life of Dr. Apoucalos was when he learned of the discovery of the small temple ruins in the Nacht Island group. The years he spent in Borneo were a dead end and a wasted effort in his mind, but just the news of this tiny archeological find was enough for him to realize that this is why he had been compelled into this particular field of scholarship.

As quickly as events would allow, he organized an expedition to T’Paku and for the next seven years he slowly uncovered the temple ruins on the small Island. For the first time in his life he came home to those who had orchestrated his entire existence.

Urged on by the siren call of inescapable fate, Apoucalos insisted on being the only one to enter the temple after the main chamber was unsealed. He left the rest of the expedition outside and that was the last time that he or any other breathing human ever saw them.

Inside the temple, Dr. Pietor Apoucalos felt comfortable in his Earthly existence for the first time. He was acting out a drama ordained ages ago. 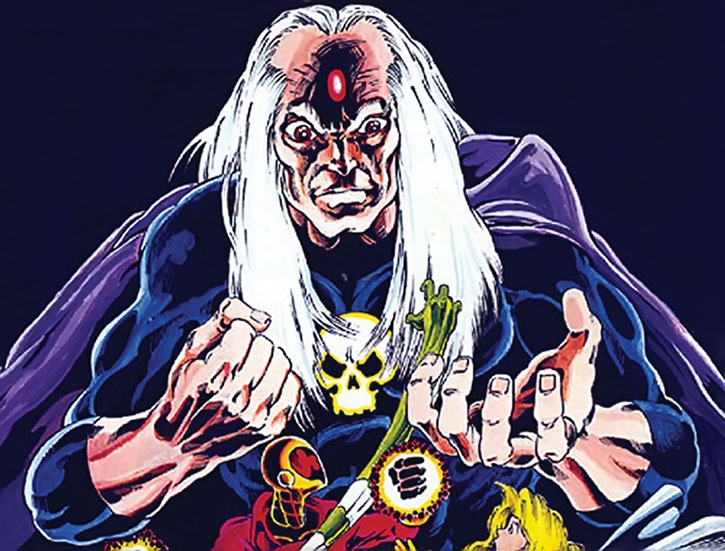 Immediately upon entering, he proceeded directly to a hidden and sealed alcove that contained a dull yellow gemstone literally glowing with supernatural energy of the most evil variety. By now, an unthinking mannikin in the hands of otherworldly puppeteers, he placed the gem to his forehead where it grafted itself irrevocably into his flesh and into his soul.

As soon as this unholy union was completed, Pietor finally learned the reason behind all of the events of his life. Since before his birth he had been chosen by a race of other-dimensional god/demons to be their tool in returning to this plane of Earth (from which they were banished long before the ages of man).

The gemstone was a magic portal through which Pietor had but to will open to let this ancient evil race-walk once more upon the Earth.

The shock of this realization had an unexpected effect upon Apoucalos. Possessed of an indomitable will, strengthened each day by the isolation he suffered, he regained control over himself and resisted his unearthly masters at the last crucial moment. They would be denied their place on this plane but their power would not.

With an irresistible surge of willpower, Apoucalos used the gemstone to leech the immeasurable supernatural power from the demons while leaving them stranded in their own plane. The world would be conquered to be sure; but not by nightmarish demons from another dimension, the world will fall instead to the darknight powers of Doctor Apocalypse!

“I am the son of elder demons ! Their power is mine !”

“Beware, for you have attracted my notice — and that shall be your undoing !”

“Do not think for a moment that your military or your technology can protect you from me. I am your technological superior. I can defeat you strategically ; I can crush you psychically ; I can destroy you supernaturally. To underestimate me would be a terrible mistake.”

Dr. Apocalypse might work well as a villain against the Doom Patrol, Titans and/or the Outsiders. At any rate Doctor Apocalypse should hold a position of power with an army of foot soldiers and a group of super-powered mercenaries by his side. Something along the lines of the terrorist organization known as Cobra, but led with a lot more competence.

Perhaps the Fearsome Five might replace the Destroyers in the V&V modules Death Duel with the Destroyers and The Island of Doctor Apocalypse to give it a more DCU feel.

In a more Marvel-based game, Dr. Apocalypse would work fine as he is used in the Island of Dr. Apocalypse adventure module for the Villains & Vigilantes game system. Perhaps altering some things a bit and making him the leader/ruler of the mutant enclave, Genosha who are either seeking out mutants to join with them, or starting to wage their war on humanity.

Instead of the Destroyers, as stated above, perhaps in the Marvel Universe the Doctor might form his own version of the Evil Brotherhood in much the way Magneto gathered together his band of villains in X-Men #1 in the early nineties.

However, it should be noted that should the Doctor need to pull out a seventh power without performing the ritualistic aspect, a Will check with an AV of 13 must be made every round. Each round engaged in this test of Wills increases 1 AP per round = the total Aps of Omni Power used to create the seventh power.

If Doctor Apocalypse should lose this battle the Gem will open up a gateway to the nether dimensions from which demons and their ilk will spill into our world.

Added Cold Immunity, Flame Immunity, Sealed Systems and Systemic Antidote to Mystic Gem to represent Adaptation power. Other than Sealed Systems, the AP levels were pulled out of thin air. Combined with his high Body score, it makes him pretty well resistant to such attacks. 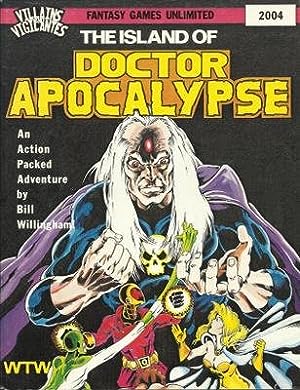 The Island of Doctor Apocalypse (A Villains and Vigilantes Adventure) 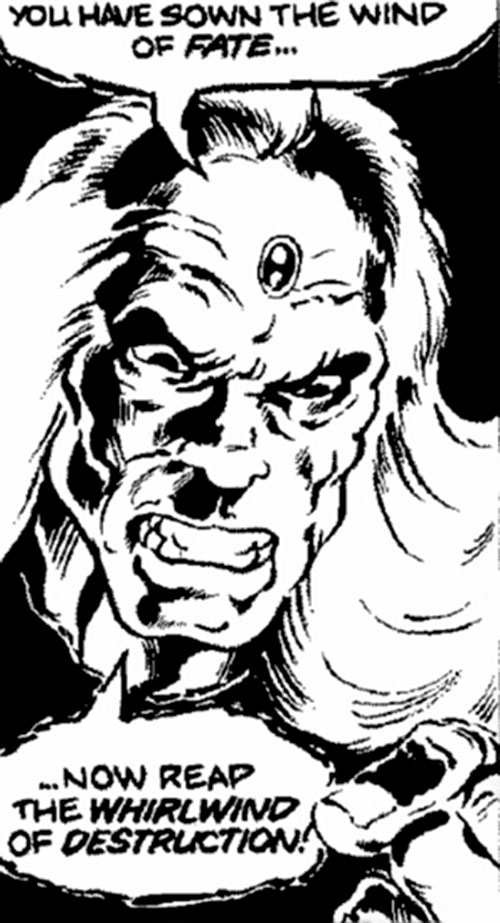