Dr. Strange is a genius inventor and engineer. He can invent incredibly powerful devices, far in advance of the science and engineering of his day.

He also has millions of dollars at his disposal, if not dozen of millions (in 1963 USD).

Strange was once hit by lightning, and stated that this had augmented the energy of his brain. Though that wasn’t explained, our game stats *arbitrarily* assume a minor enhanced intellectual speed power and a reduced need for sleep. These explains how quickly he rebuilt his power base.

The inventions that were seen were :

Note that Dr. Strange doesn’t have endless arsenals and gadgets. He only builds the equipment he needs to carry out his current plan. He thus may not have anything to fall back on if it goes awry, beyond a quick getaway means. In DC Heroes terms this is caused by his low-ish Hero Points .

Doctor Strange was only seen once in 1963, but he seemed to be a feared and well-established evil science mastermind. He reportedly led a “fantastic life of crime”.

In late 1962, his secret mountain laboratory was stormed by US airborne troops. The casualties during the assault were greatly reduced when Strange’s ray gun was struck by lightning, flooring him and allowing for his arrest. The incident left him weakened and with spells of dizziness for months, but reportedly also further energised his brain.

Strange continued to feign weakness so as to avoid being placed in the highest security cells.

Strange whipped up a little mind control device. He then waited a bit as Iron Man (Tony Stark) was set to perform a demonstration at a nearby children’s hospital. Remotely mesmerizing Stark, he had him burst him out of the prison in two shakes of a lamb’s tail.

Mere weeks after having escaped, Strange was already set in a futuristic, impregnable base on a private island near the US’ Atlantic coast. He had immense wealth at his disposal as well as a coterie of useful allies and an arsenal of weapons of mass destruction. 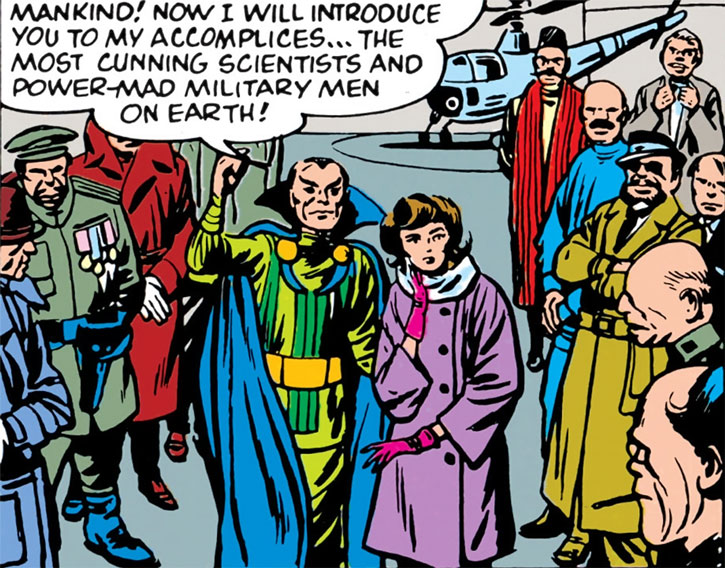 He also had his daughter brought to him to watch his impending triumph. However, she hated this and was horrified by her manic father’s evil.

After detonating a 200-megaton bomb in space, Dr. Strange gave the world a 24 hours ultimatum to surrender before he destroyed everything. A strike was launched against him using atomic bombs, but his advanced force fields powered by immense generators absorbed the explosions.

However, Iron Man was launched by submarine and attacked the island from beneath, drilling through the rock. The force fields erected by Strange were impregnable, but did not extend underwater. Iron Man zeroed in onto the generators from underneath then smashed them – almost killing himself and losing all power in his armour.

Both the island and Iron Man were now powerless. However, Carla Strange threw a battery-powered flashlight at Iron Man so he could drain the batteries and repower his chest plate. Shocked by his daughter’s attitude but understanding her point of view, and defenceless against Iron Man, Doctor Strange fled.

Doctor Strange was never seen again, and it doesn’t seem too likely that he reformed. Perhaps he was slain by a rival genius from the new generation, such as Doctor Doom. The Red Skull could also be a culprit if Strange was indeed killed off-panel.

Or maybe he left to conquer other worlds and offer them to his daughter ?

Doctor Strange is a domineering megalomaniac who revels in his reputation as “the master of evil”. He’s your generic 1950s conquering mad genius.

However, he feels guilty over having neglecting his daughter during his years as a criminal mastermind. He wants to earn her love and admiration, though he clearly has little idea about how to actually achieve that.

Nevertheless, he was very understanding and reasonable as to why his daughter chose to betray him.

“Not for nothing have I been called ‘the Master of Evil’ ! I created this tiny electronic gadget by modifying radio and TV parts.”

“By [then] I’ll be executing my master plan to dominate the world ! How proud my daughter Carla will be of me then ! Because of my absolute power, she’ll have her pick of kings and billionaires !”

“As the world’s greatest scientific genius, I should rule mankind !”

“Of course I forgive you, you little fool ! You’re still my daughter, aren’t you ? Maybe someday you’ll understand… and even help me ! But I must go now ! Iron Man is gaining strength every second ! Farewell, Carla !”

Doctor Strange is a textbook 1950s/early 1960s comic book villain archetype – though the Marvel Revolution™ was also making this type obsolete in favour of more textured characters (such as Doctor Doom).

But he could easily show up fighting 1950s adventures such as the Martian Manhunter or the Challengers of the Unknown.

Even in the Marvel Universe there could exist an unchronicled clash with an Atlas-era hero such as Jimmy Woo or Marvel Boy. Dr. Strange felt more like an Atlas-era character than a Marvel Age one.

Bonuses and Limitations:
Superspeed only for Mental Tasks. 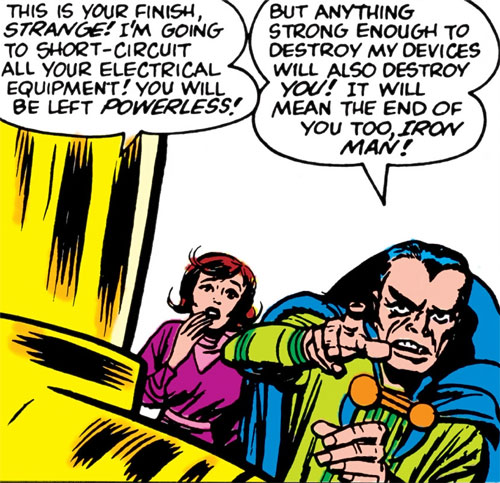 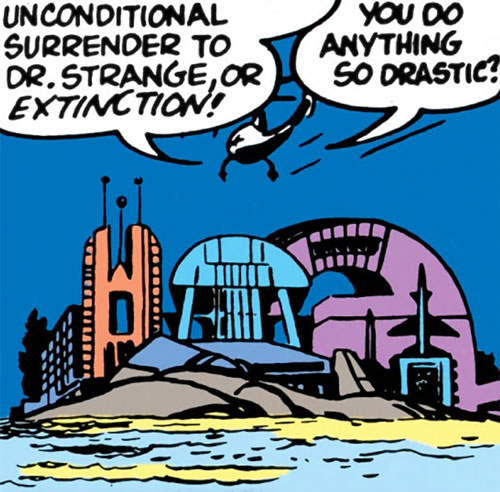