The Exiles were strikingly close to a group of Player Characters  in a newly-debuted RPG campaign. They’re also a good choice if you need a generic hero team to play a bit part in your setting.

Dr. Deming’s has been described as “almost superhumanly brilliant”, with superior scientific skills. She may or may not have enhanced abilities, since it was never explained whether her Theta viral infection worked like that of the other Exiles.

It is possible that she emerged from her Theta infection with an enhanced scientific intelligence and some sort of anti-ageing factor, but that is never stated.

Dr. Deming is wealthy – the source of her private fortune was not mentioned.

The Exiles had very few Hero Points . They gained powers and had costumes, but that didn’t make them super-heroes – just people with powers and costumes. They did not enjoy narrative protection or that special form of luck and “right stuff” that goes with being a super-hero.

As per normal writeups.org policy, the stats and the explanations above are solely based on primary sources. Dr. Deming’s abilities were much better explained in unpublished work documents (and one interview referring to those), but we never got to see those on the comics page.

The abilities listed in secondary sources are :

(The following makes full use of secondary sources. An History section solely based on the comics is either four lines long or a morass of speculation and hypotheses).

Rachel Deming is a brilliant but maverick doctor and medical research scientist, born in Iowa in 1924. Circa 1960, she discovered that she was suffering from some sort of rare disease and focused her research on this condition.

Deming discovered that there existed a rare viral agent, which she called the Theta Virus. It attached itself to persons carrying a certain genetic sequence. Normally, the virus was 100% lethal. After incubation it triggered massive mutation, superhuman powers manifestations and autotoxicity – leaving but a broken skeleton behind.

However, by using herself as a test subject over three decades, Deming developed a treatment. She could monitor a person being attacked by the Theta effect, and counter the lethal mutations as they occurred. She could also let those random effects that happened to be beneficial take place.

Presumably she also developed means to prolong the incubation stage of her own Theta infection for years.

This groundbreaking work meant that, once a person with the genetic sequence in question (a “potential”, in Deming’s terminology) started evidencing Theta symptoms, it was possible to prevent death and leave them a superhuman.

However, some people could be turned into monsters (probably superhuman powerful ones) by mishaps in the treatment or the sheer randomness of it all. And some emerged from the treatment alive but without any abilities.

When seen in the story, Deming’s treatment could only be done in the 48 hours that followed the first manifestations of superhuman powers. After that it was too late, and the Theta effect had done too much damage. This is presumably because the sensors that Deming developed to detect “potentials” could only pick up a remote signature once the infection went active.

Dr. Deming’s research was stolen by ruthless millionaire Malcolm Kort to build up a private army of ultrahumans. In response, Deming built herself a high-tech base on an island off the Californian base, called Stronghold. From there she intensified her efforts to rescue Theta virus victims, both to save lives and to prevent their recruitment by the unethical Kort.

(From this point onward, we’re no longer using secondary sources – everything below was mentioned in the comics, though sometimes just in a caption.)

Deming also sought to build up her own force of Theta survivors to take down Kort. This formed what was essentially a super-hero group, complete with costumes and code names. The team was called the Exiles and was made up of Tinsel, Deadeye, Ghoul, Catapult, Mustang and field leader Trax.

Dr. Deming also saved a nursing student called Heather Faraday. She emerged from her brush with the virus without powers but became Deming’s assistant.

However, Dr. Deming had no idea about how to run a clandestine strike force. Her sole recruit with combat experience, code-named Deadeye, kept reminding her that her “operatives” were just kids with some tricks to them, not soldiers or heroes.

The Exiles started with low power levels, zero experience and insufficient training, and were generally unsuccessful in the field.

As they tackled more operations, their power level and their competence rose, but that didn’t really address the problem Deadeye had pointed out.

One operation in 1993 went well. The Exiles rescued insufferable student Amber Hunt from a kidnapping attempt by one of Kort’s operatives, Russian super-mercenary the Supreme Soviet.

Another operation launched almost simultaneously had more typical results. Instead of preventing the capture of young Theta infectee Tim Halloran, the immaturity, grandstanding and stupidity of Catapult and Mustang only resulted in the destruction of the Halloran home, the death of Mrs. Halloran and Tim’s kidnapping.

The two Exiles then had to destroy police equipment and assault officers to flee from the law.

Wanting to rescue Halloran from Kort before the 48 hours window had elapsed, Deming ordered an all-out attack on Kort’s. She personally participated so she could deliver treatment in time.

The operation was disaster.

The treatment from Kort’s pet scientist worked all wrong on Halloran. The Exiles handled the panicked youth very poorly, and two of their numbers — Ghoul and Tinsel — were captured by Kort’s forces and left behind.

Tinsel was killed while attempting to escape. As a consequence Ghoul went on a vengeance run where he murdered the mercenary who had killed Tinsel, then blew up the top floors of Kort’s building. This apparently killed everyone inside – including Kort.

Meanwhile the rest of the Exiles failed to locate Hallohan, destroyed more police equipment while escaping from the LAPD, and returned to Stronghold empty-handed and minus Tinsel and Ghoul.

As they got near, Deming received a panicked message from the Stronghold staff. Amber Hunt had foolishly activated the treatment machinery, thinking that it was the only way to save her life from the virus.

The treatment reacted to her unique condition with extreme violence. The explosion proved inevitable despite all attempts. Those inside Stronghold were incinerated. Most of those who was approaching the base were killed by the explosion.

Dr. Deming was originally assumed to have been killed by the blast. The skycycle she was riding was sucked down, slammed into the ocean, picked up by a small tsunami and then crashed on land when the wave reached the shore.

A few Exiles survived. Catapult was plunged in a coma, from which he never emerged before his death. Deadeye survived but vanished – Hardcase mentioned that he had gone insane, possibly from brain damage. Deming narrowly survived, but spent months in full traction.

She was conscious when Amber Hunt, contacted by an entity on the Moon, started broadcasting exotic energies basking L.A. in strange lights and escalating toward a major danger for the planet. Hunt’s radiation triggered a major ultrahuman crisis that resulted in a string of conflicts on the Moon, which broke the link between Hunt and the entity and saved Earth.

Dr. Deming left the hospital and retired to a sort of manor, though she was still a wheelchair with a bandaged head, one arm in plaster, a neck brace, etc.. Shocked by the brutal end of her team, she now refused to involve herself in ultrahuman matters.

When Ghoul came to visit her, all she would do was to tell him where the Exiles were buried – apparently in a monument erected on Deming’s property. The depressed Deming felt that she’d only cause more damage.

Deming was briefly spotted several months later, apparently retired. She was still walking with a cane, one of her legs having presumably suffered permanent damage in the destruction of Stronghold. It is also possible that her right eye retained some permanent damage.

Dr. Deming has white hair and her skin is often depicted as being very pale – almost ivory-white. She has an idealised comic-book body and her face bears no sign of ageing – she looks at most 30.

Dr Deming clearly had superior grit and intelligence – but her expectations for the Exiles and herself were not realistic. She was making rational decisions, but these weren’t informed by relevant experience and she kept under-estimating the human factor.

She was particularly prone to missing just how unprofessional and unreliable some of the Exiles kids were, and just how dangerous combat is when one doesn’t have narrative immunity.

She’s definitely not a people person. Deming is aloof, impatient, annoyed by irrational and emotional behaviour, particularly blunt, etc.. She means well, she’s aware of her shortcomings and she’s making obvious efforts to be nice, but her efforts soon disintegrate against the realities of dealing with folks.

If Deming is dealing with people who are smart, serious and rational, though, she’ll be generally pleasant. For instance she seemed friendly toward her assistant/nurse.

Kort described Deming as an obsessive-compulsive, which likely was correct.

The characterisation in work documents is that Dr. Deming is a loner, preferring to spend all her time working alone in her lab. Social interaction is a strain for her as she’s very goal-oriented and doesn’t do small talk or talking about herself.

Likewise she very seldom expresses her feelings aside from occasional sardonic humour, and is a very controlled person. Her discipline fails when it comes to junk food, though – HoHos , Yoo-Hoos , greasy burritos, cheese burgers and chocolate being favourites. She also has a weakness for the noblest of drinks – dark coffees such as espresso or French roasts.

“You can be healthy – and more powerful than you ever imagined. Or you can die. That’s not a threat. It’s the nature of the virus.”

Nurse Faraday: “How did it go ?”
Dr. Deming: “Badly, as usual. I have all the bedside manner of a specimen jar. You should be handling the counselling sessions, Heather.”

Drawbacks:
MPR (Nearsighted) and later another MPR (Damaged leg, has to walk with a cane). Deming’s Exiles-related activities are a secret, treated like a half-strength Secret ID. 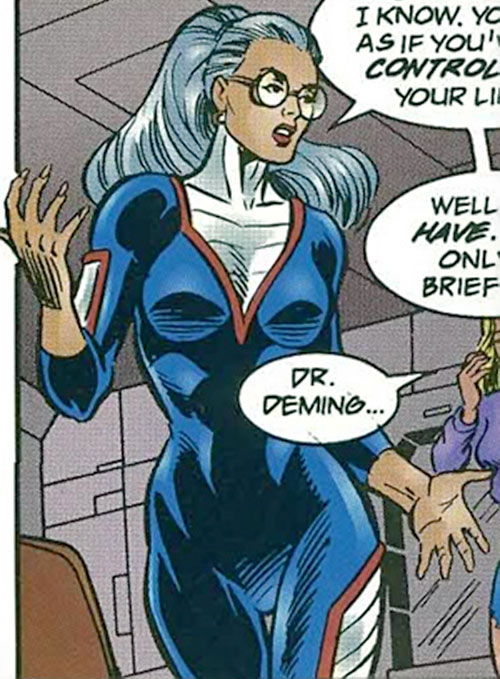