His greatest asset is his access to, and mastery of, the technology of the aliens Myndai. That allows him to deploy gadgets and giant monsters few people on Marvel Earth can match. Some can even threaten Godzilla, the King of Monsters.

Douglas Birely was a geneticist studying the mutagenic properties of radiation. He worked for a private research company in California. Reading of the growing number of human beings who had gained superhuman abilities through exposure to radiation, Birely asked his employer for permission to subject himself to the radiation they were using in their tests on animals.

Although this was refused, Birely staged a laboratory accident to proceed anyway. He did not acquire any superhuman powers, but instead contracted skin cancer. An official investigation of the incident revealed Birely’s sabotage and he was fired from the company.

Jobless, Birely learned of a highly radioactive meteor which had recently fallen near the Aleutian Islands. He used his savings to charter a boat to the site. Unearthing the huge meteorite, which he named the Lifestone, Birely acquired funds from some as yet unrevealed source in Japan. He set up a laboratory in the Aleutian Islands.

He then perfected a process by which to artificially mutate animals into huge, monstrous organisms. His first successful creation was Batragon, mutated from a bat.

Birely soon fashioned himself a bodysuit that inhibited the effects of the skin cancer eating away at his body. He then adopted the identity of Doctor Demonicus.

He then recruited a small army of criminals, mercenaries, and derelicts to assist him and used them to enslave the Inuit natives to his island base. Birely put these Inuit to work constructing a transport craft made from the meteoric ore of the Lifestone.

Because his monsters required periodic contact with the Lifestone to retain their vitality, it was necessary to mobilize the meteor in order to expand the range in which his monsters could operate. Birely planned to roam the globe with his creations, using them to plunder and pillage.

Fortunately, S.H.I.E.L.D. learned of his operation while tracking down Godzilla. As Godzilla battled Birely’s monstrous creations Ghilaron, Lepirax, and Centipor, S.H.I.E.L.D. liberated the enslaved Inuit and captured Birely’s troops. But Birely managed to escape, aided by the alien Maur-Kon of the Myndai.

Maur-Kon provided Birely with a new headquarters in a satellite orbiting the moon. He also gave Demonicus the technology necessary for bombarding the Earth with huge meteors. Aboard the space station, Birely mutated new genetic monsters and constructed robotic ones from Maur-Kon’s designs.

These he unleashed upon the Earth in preparation for his meteor attack. These monsters, Starchild, Cerberus, and the Hand of Five, were met in combat by the giant robot team Shogun Warriors. The Warriors defeated their monstrous foes and destroyed Birely’s station and plans. They then took Birely back to Earth and handing him to S.H.I.E.L.D. custody.

Birely later escaped with help from his previous henchmen. Then he recovered a fragment of the Lifestone and procured more scientific equipment. He soon created his own brand of superhuman villains from kidnapped victims and willing henchmen. Dubbing them the Pacific Overlords, their criminal activity alerted the superhero team Avengers.

The Avengers were captured by the Overlords as Birely put his master plan in action. He caused a new volcanic island to rise from the ocean floor, an island that he declares the nation of Demonica. In addition, Birely had won United Nations membership for Demonica through hasty diplomacy and a promise to share Demonica’s considerable mineral wealth with the world.

Since Demonica was now sovereign territory, Birely ordered the Avengers to leave.

Soon afterward, however, Birely fell under the influence of the demon Raksasa in unknown circumstances. As a result, he was driven mad. He renounced his ties to the United Nations, turned his Pacific Overlord into mind-controlled slaves, and recruited criminals as his new country’s citizens, including Zvezda Dennista and Klaw. Klaw was made vice-president of Demonica.

The Overlord known as Kuroko escaped to elicit the aid of the Avengers. But she was retrieved by Zvezda Dennista and Klaw before the Avengers could act.

On Birely’s orders, the Pacific Overlords began capturing aircraft that flew too close to Demonica. The Avengers, acting on behalf of the United Nations, infiltrated Demonica, eventually revealing Raksasa’s influence. The Avengers persuaded the villains of Demonica to rebel, and they collectively succeeded in preventing Raksasa and his demon hordes from invading Earth.

At the end of the battle, Demonica sunk into the ocean taking Birely, the Pacific Overlords and Klaw down with it. The Avengers escaped with Zvezda Dennista, the civilian hostages and most of the citizens of Demonica.

Demonicus’ condition has given him demonic features, as described above. His costume thus totally covers and encloses him.

Well, he’s a mad doctor and creator of giant monsters. He’s obsessed by demonstrating that his theories about radiations were right along and only the jealousy of lesser scientists blah blah.

He’s one of those “wants to rule the world” type. But has enough weight to actually necessitate serious efforts from S.H.I.E.L.D to stop him, and the odd lumbering intervention from Godzilla, the Shogun Warriors or the West Coast Avengers.

Just play him as a Grandiose Scheming Evil Scientist crossed with a random James Bond mastermind, and give the giant monsters cool names such as Batragon, Ghilaron, Lepirax, Centipor, the Hand of Five, etc.

He’d fit in real well. Bring Godzilla and the Shogun Warriors along, don’t be shy.

Or maybe his role could simply be taken over by the modernized version of the Key, after the Key unlocks the secrets of Myndai technology but accidentally frees Godzilla from suspended animation, triggering a JLA case.

Helper(s): The Unofficial Handbook of the Marvel Universe web site. 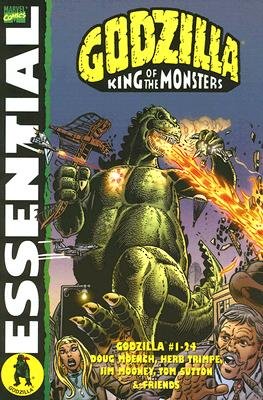