Doctor Diehard can exercise a degree of control over the forces of magnetism. This allows him to control metallic substances.

He has been shown using this power to allow him to fly, and to project protective force fields, but the full extent of his abilities could well be wider than this.

Running a school for metahumans, Hans Leckter inducted his best students into his Zen Men team. When the Angorian government enacted the Metahuman Act, forcing all metahumans to serve them, Leckter encouraged peaceful protest.

This didn’t stop the government’s Meta-Militia from laying siege to his school. They threw him and any of his students who wouldn’t join them into an internment camp.

He still encouraged peaceful protest. This lasted until his daughter, Anna, was killed resisting rape by one of the Meta-Militia guards. His son Jack was soon also killed, while trying to avenge her. Snapping, Leckter led a revolt within the camp. But it would have failed if Lord Havok hadn’t come to his aid.

Relocating his school to Germany, Diehard joined Lord Havok’s Extremists in gratitude. The two were close friends for a while.

Later on, the United States of Angor became incensed at Lord Havok’s taking over of Slovekia and executing its the royal family. President Americommando threatened invasion even without the sanction of the International Council.

Gathered in Slovekia, the Extremists captured the multiverse-travelling Challengers from Beyond. These were Jason Todd, Donna Troy, Kyle Rayner, the Jokester and “Bob” the Monitor. The Extremists mistakenly believed them new members of the Meta Militia. They were disabused of this by the arrival of Barracuda, their spy within the Meta Militia.

Soon after, Monarch appeared with some of his cross-dimensional super army, inviting them to join him. They refused, and a brief fight ensues between the Extremists, Monarch’s army, and the escaping Challengers. In the fray, Barracuda was killed. The Challengers escaped, and Monarch withdrew, making a temporary alliance with Americommando.

When Tracer was badly beaten by Monarch’s troops, Lord Havok recalled the Extremists to Slovekia. There they waited while the Meta-Militia fought through Lord Havok’s army of Havokoids. The invaders were further delayed by having to to break through the force field surrounding Slovekia.

Tensions among the group escalated as attacks were made on places close to their heart. Hans received the news that his Academy for Advanced Children, where his wife had still been, had been obliterated.

His family and home destroyed, Diehard lashed out at Lord Havok’s inaction. He openly challenging him, and tried to get the other Extremists on his side. He failed, and they killed him on Lord Havok’s orders.

Originally a pacifist, urging the peaceful protest of the Metahuman Act, he changed when his children were brutally murdered. He now accepted that might was the only language his enemies understood. He became driven to do whatever was necessary to protect the rest of his charges. Sterner, pushing his students harder, he became increasingly angry and suspicious.

While at one time he had a strong friendship with Lord Havok, this has deteriorated over the years. Each has become more driven by their own slightly separate goals. Diehard’s increasing suspiciousness and Havok’s increasing secrecy drove a wedge between them.

[Pre-concentration camp] “No ! I will not have violence committed in my name !”

“Got to love an enemy who carries an arsenal of metallic weaponry on his person.”

“Must I do everything myself ?”

“Oh, deity… why must I be surrounded by fools ?”

“I don’t know about the rest of you, but when my end comes, I want to face it head-on, not sitting here like a scared little prisoner in his cell.”

Diehard being a counterpart of Magneto in the Marvel Universe, the Extremists might do best as being from an alternate reality. 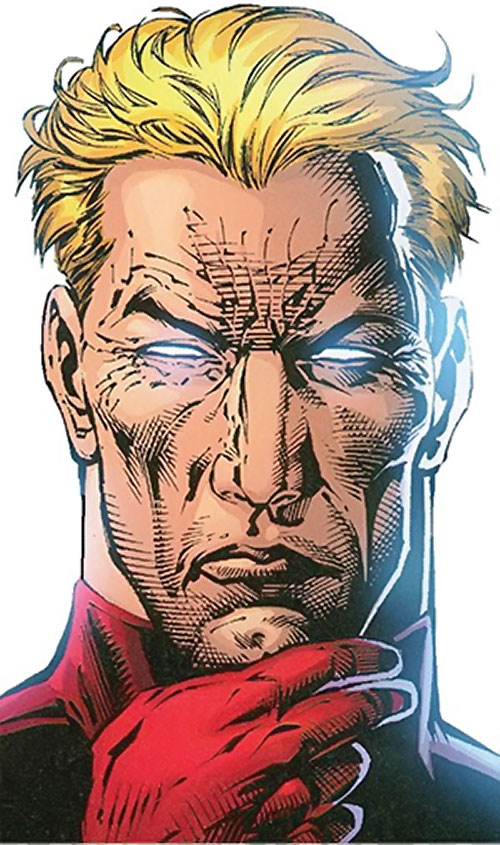