Doom is a scientific genius who has built time machines, space craft, robot servants and guards, mind control devices, and innumerable super-weapons. His most impressive devices have been his time platform, the various models of Doombots and the battle/life support armor he wears at all times.

Doom is also a disciple of the mystic arts, which is unusual for a man engaged in the technological arts. An experienced sorcerer, Doom is capable of casting basic spells, such as eldritch bolts, mystic shields, the crimson bands of Cyttorak and the dimensional conjuring of the Falroth, with good skill and power.

Although hobbled by an arrogance of fanatical proportions, Doom is a true genius capable planning and carrying out the most complex of plans.

These include impossible escapes (where he appears to die), surprise weapons (used at the right moment to defeat all enemies at once), magic rituals (although rarely used against non-magic users), invoking diplomatic immunity (another escape tactic) and much more (that his opponents haven’t thought about).

Victor Von Doom was raised by Romani nomads  in a small European county called Latveria. He lost both of his parents at a very young age. Swearing revenge, Victor increased both his scientific and mystical knowledge with such determination that he was given a full scholarship to Empire State University.

It was at ESU that Victor met Reed Richards and Ben Grimm, and where he started his extra dimensional research. Doom’s vanity prevented him from adjusting the schematics to one of his experiments, and the end result was an explosion that scarred Victor for life.

Expelled from school, Victor began to travel the world. He eventually stumbled upon a village of Tibetan monks who trained him and crafted him a suit of body armor, complete with face plate. He soon returned to Latveria, overthrew the government of King Rudolpho and crowned himself King.

Ruling with an iron fist, Doom began to turn the resources of his small nation to his plans of world domination.

In the meantime, his old enemy Reed Richards had risen to prominence as the leader of the Fantastic Four. So when Victor set his sights on obtaining the mystical treasure of Blackbeard the pirate, he knew just whom he wanted to use as his pawns in that venture.

Since that time, many of Doom’s schemes have involved somehow getting the FF to do his dirty work for him. Doom still runs his country with an iron fist, though oddly, his people seem quite happy with their monarch.

Several coups, led by people such as prince Zorba, have ousted Victor from his palace in Latveria, but he always seems to find his way back.

In his plans for world conquest, he has clashed many times with the Fantastic Four, the Avengers, the X-Men and other costumed heroes such as Spider-Man.

Dr. Doom has also been present at every major crisis amongst the superhero population (’Secret Wars’), against the Earth (’Heroes Reborn’) or against the entire universe (’Infinity Gauntlet‘). He helped out with his knowledge, while grabbing power at every possible occasion.

He has even died a few times, but as the Fantastic Four know only too well, that’s not enough to keep Doctor Doom down.

Dr. Doom is a man of regal status and a forceful presence. He’s always seen clad in a suit of shining, silvery metal armor, which covers every part of his body. Only his brown eyes, surrounded by scarred skin, are visible, through the rectangular eye holes in the facial mask.

The nose is a triangular marking and the mouth is a long rectangular formation filled with saw tooth-like machinery visible inside. The connecting points of individual armor parts, such as the gauntlets, the boots etc, are fully visible.

He wears a piece of green fabric as a tunic on top of the armor. This tunic is held in place by a thick, brown leather belt with a yellow stopper piece, complete with a brown pistol holster on his right side. The majestic look is enhanced by a large, dark green cape, complete with a hood and two yellow, round cape-holder pieces.

The armor appears very medieval in design and the man commands respect and authority by his mere presence. Dr. Doom is always seen standing in an imposing manner and it’s clear from his body language that this man believes in his own superiority and power.

Dr. Doom is a study in contrasts. He is a proud, arrogant, and supremely self-confident megalomaniac with an obsessive need to control others. At the same time, he genuinely seems to want the best for the Latverian people, but that can only be accomplished by his rule.

This benefit is supposed to extend to anyone under his rule, provided they respect and obey him. He always holds his word and he refuses to fight unarmed opponents.

Still, the people have to recognize Doom for the great man that he is, and he craves that they hold occasional parades for celebrating him (sometimes people appear to do this willingly, while other times his guards need to order such parades).

He has a very powerful emotional life, as, perhaps best exemplified by his deep love for his mother and his amazingly powerful musical plays. But he refuses to let anyone else see that since he considers longing and such to be the trademark of fools and weaklings. His devotion to his mother borders on Oedipal.

Dr. Doom will always take the action, speak the necessary words, and team up with the necessary allies, to be able to show his most powerful side and his genius. He will willingly ally with an enemy, even Reed Richards, in order to show his superiority over that enemy, and perhaps even to get them to owe him some gratitude for his help.

His power lust stems from his conviction that everything would be better if he was in charge. He has no equal anywhere and only Doom is fit to rule the world, and perhaps even the galaxy. Nothing is too big for Dr. Doom.

Doom will almost, without exceptions, kill any underlings who dare to disrespect him or who dare hint at other beings of greater power or skill. Telling Dr. Doom that he has made a mistake is likely to trigger a murderous rage.

At the same time, he takes good care of his family, which currently includes his adoptive son Kristoff and his servant Boris, and even shows them his love. Like a medieval despot, he will listen to disputes presented to him by his countrymen and he will make judgment as righteous as possible.

Provided his underlings serve him without questions, and produce the desired results, he can be quite a benevolent lord.

Doom enjoys hearing the sound of his own voice and is a regular chatterbox during combat. Although Dr. Doom’s actions have led him to be regarded as a criminal, there have been many alternate timelines where he ended up a hero instead. In this aspect, he’s much like the master of magnetism, Magneto.

Dr. Doom is extremely intelligent and always has multiple levels of plans and backup plans prepared; all of this has been done in his castle where he lives a regal life.

While Doom having access to many gadgets, such as impersonator robots (doombots) and hired help, he will personally travel when necessary, with the necessary safety precautions, to get things done.

His ego demands that he defeat his enemies in fair battles of strength and intellect. After all, there is no glory in destroying a foe that has already been vanquished by another. This sense of honor has saved the lives of the Fantastic Four on more than one occasion.

His rivalry with Reed Richards, whom he blames for the destruction of his face and who is his scientific equal, is legendary — perhaps the greatest rivalry in comics.

“This is Planet Doom. As it was ever meant to be. As the world would be under the stewardship of Victor von Doom. Perfection.”

In the DCU, Doom was an old classmate and rival of Lex Luthor’s. At one point, each was working on a critical experiment (Doom searching for his mother’s soul, and Luthor working on some sort of artificial life).

The two experiments interfered with each other, causing a minor disaster which scarred Victor’s face and destroyed Lex’s hair. Each blamed the other for the failure and loss, causing a lifelong enmity between the former friends.

Luthor grew his family power base into a multinational corporation, leaving Doom to return to Latveria, making it difficult to keep abreast of the outside world, given his image as a “tin pot dictator.”

To resolve this, Doom approached and manipulated the brilliant Steve Dayton, and formed Dayton Industries to feed new technology to him, occasionally using the power-hungry Dayton himself as a guinea pig of sorts.

To combat the technology created by Doom, and in hopes of bolstering his own public image, Luthor contracted Niles “Chief” Caulder (who rumor suggests might actually have been a clone of Luthor’s) to find (or manufacture) freaks with special abilities, and turn them into a combat-ready force.

As a mild tweak at his rival, Luthor called his team the Doom Patrol. Doom could not let such a slight go unresolved. Working with Dayton, the pair created a helmet to enhance psychic ability. Not wishing to risk his own mind and body until the technology was fully tested, Doom sent Dayton to infiltrate the Doom Patrol as Mento.

It was not to be, however. The Doom Patrol was killed by General Immortus, and Superman appeared on the scene, making Luthor’s team of “freaks” obsolete (one wonders if Luthor was behind Immortus, cutting his losses and eliminating any “moles” placed by Doom).

Since then, Doom and Luthor have become major rivals, with Earth’s superhero community (particularly Superman) frequently caught in the crossfire.

This happens so frequently, in fact, that few of Earth’s people have yet to realize the rivalry between the two brilliant men, assuming the heroes to be the targets in the first place. LexCorp created Team Luthor, designed primarily to counteract Doom’s robots and armors.

Doom, however, remained closer to the superhero community through Dayton. Mento infiltrated the Teen Titans (along with Logan, now calling himself Changeling), continued to refine the Mento Helmet, and created the Hybrid.

The Mento Helmet, however, turned Dayton unstable, and he began fighting the Titans, on his own, and through the Hybrid. Doom cut his ties with Dayton, and began work on a second-generation Mento Helmet that could be used more subtly.

Doom, in fact, replaces many of Lex’s appearances outside of the Superman titles (other than the presidential bid, of course, since a foreign national wouldn’t be legally permitted to run for the office).

It was Doom, rather than Luthor, who was the ringleader of the Morrison-incarnation Injustice League, and the second-generation Mento Helmet was given to the man calling himself Prometheus II (after, it should be noted, the reluctant hero of Dayton’s Hybrid).

Prometheus, himself, is a clone of Doom’s, psychically fed a backstory of criminal parents dying at the hands of police officers.

Through a variety of means, Doom remains alive under many aliases (rumors place him as using Mordru’s identity for some time) until at least the 30th Century, where, calling himself “Vidar,” he managed to get himself appointed Green Lantern of Earth’s Space Sector.

When he attempted to probe the origins of the universe, looking for yet more power (some believe he was trying to supplant the Guardians of the Universe, themselves), the Guardians disbarred Doom. He became the Legion villain known as Universo (who was far more impressive than the writers made him out to be). 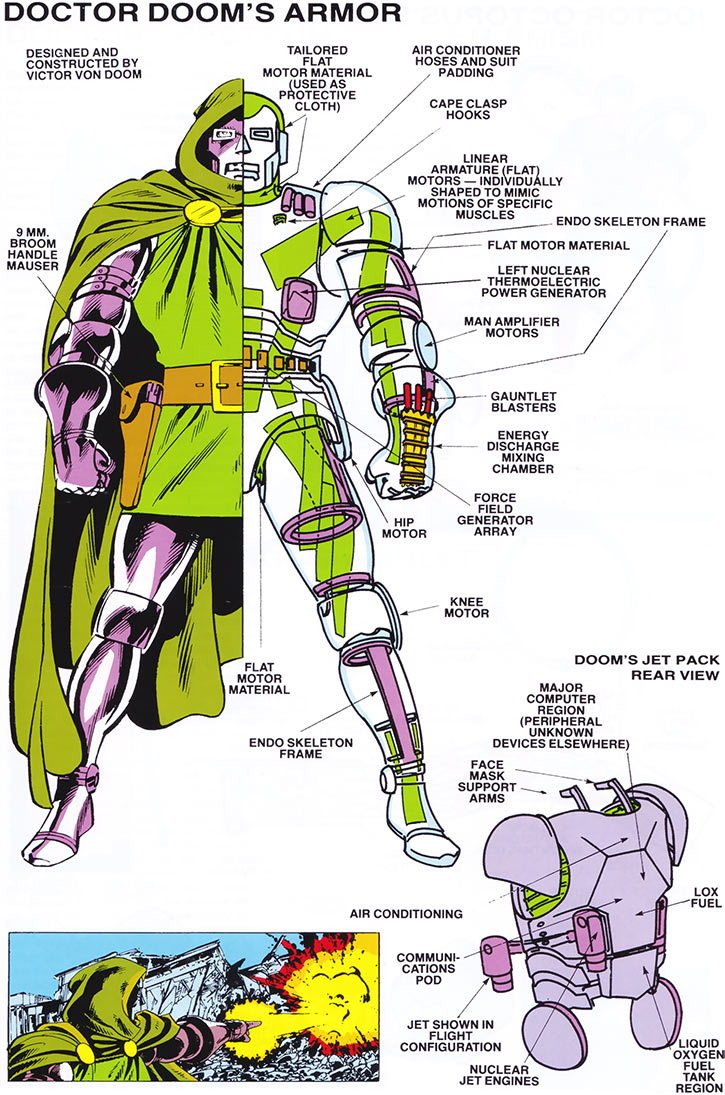 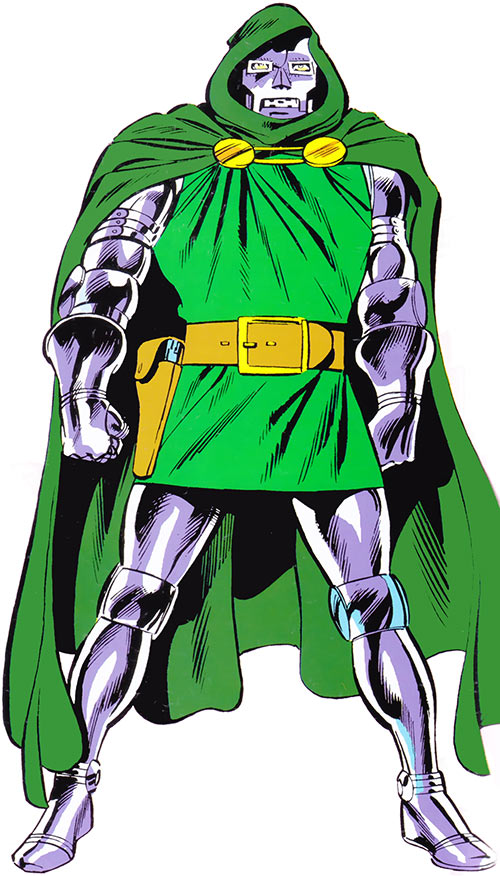 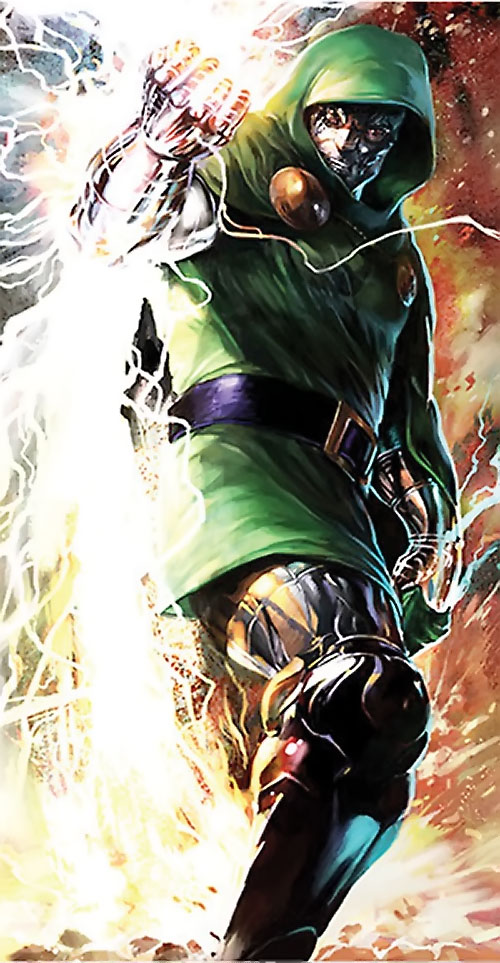 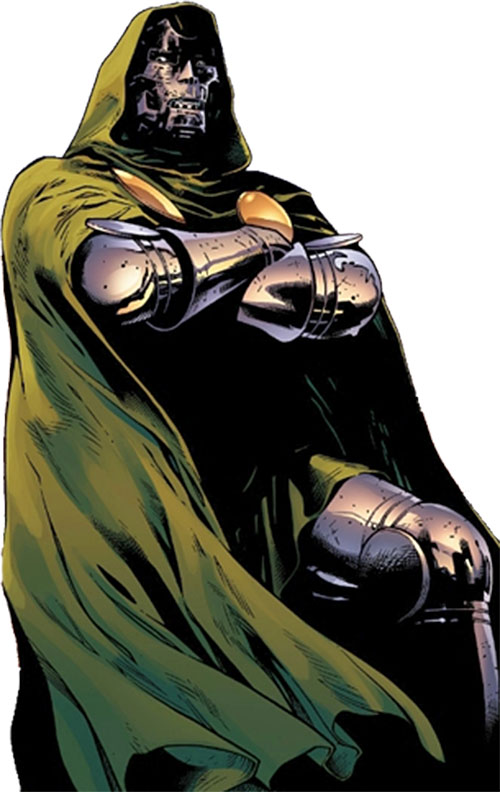 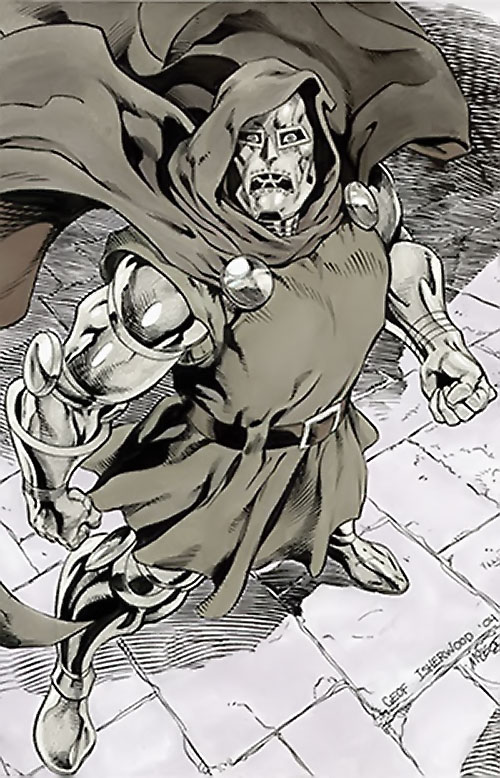 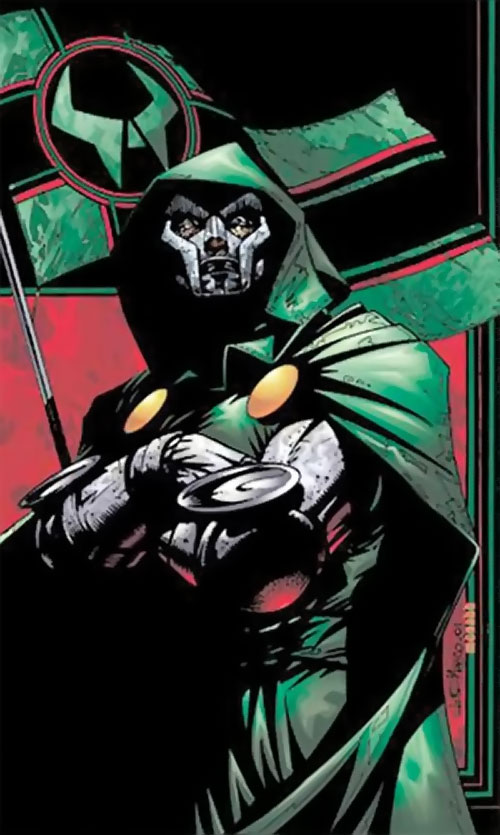 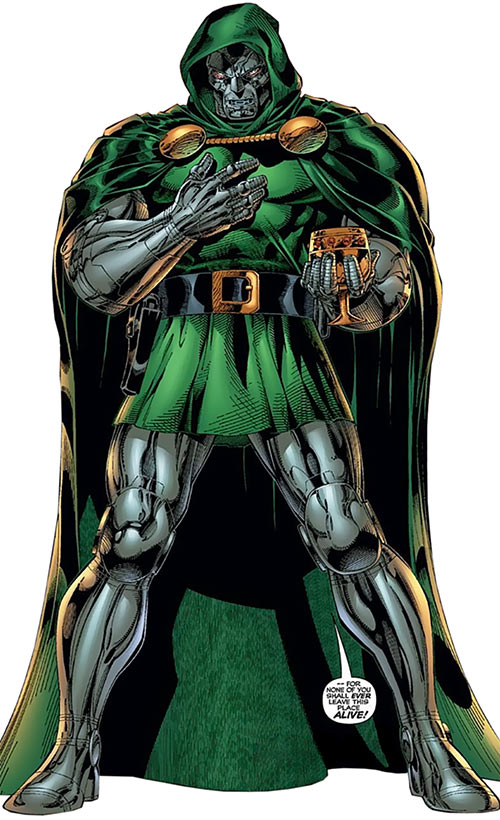