Van Damme’s skin has been replaced with a regenerative mechanical substance. His remaining internal organs are also of a techno-organic nature. As a result he:

Following his acquisition of Mary Storm’s company, he had access to the books of magic recovered from Atlantis. He used them to learn the mystic arts. He has wielded magic to:

Equipment he is known to have used include a swarm of mechanical mosquitoes. These are capable of breaking through shatterproof glass, shredding a human in seconds, and beaming a live video feed halfway around the world to Van Damme.

Doom also developed a tattooing process that implants microfibres into subjects which makes them follow his commands, either through suggestion, or by overriding their consciousness.

He has also taken to wearing a layer of artificial armour, which enhances his protection. It also looks slightly less creepy than his natural armour.

On Victor’s 10th birthday his father taught him his lineage. The Van Dammes were descended from Vlad Tepes Dracula, whose descendants were scattered across Europe. Those who settled in Belgium had married into the Van Damme family. Around age 12 Victor was brought to America and began studying at the Baxter Building, an American think-tank for genius children. 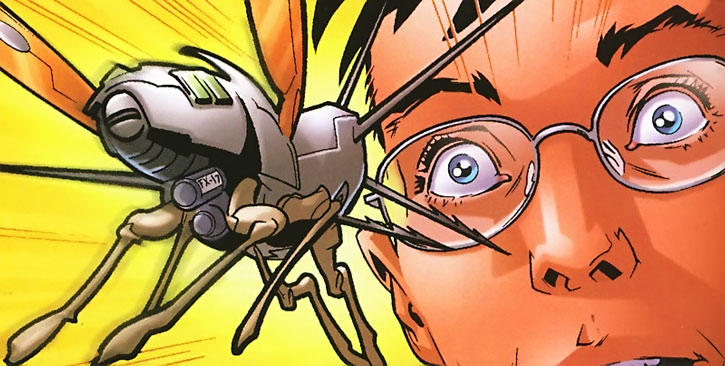 Taught by his father that most others were beneath him, Victor rarely spoke to his fellow students for 4 years. But one day, needing help from Reed Richards with his robotic designs, he broke into Reed’s room and showed him how to correct his calculations.

Over the next five years the two formed a loose partnership. As the final construction of Reed’s full-sized N-Zone transporter neared completion, Victor came to believe Richards’ super-position calculations were faulty. He changed the settings just before the test without informing Reed.

The machine malfunctioned, transporting Van Damme, Richards, Sue, Ben, and Johnny across the world. It also physically changing them. Victor found himself transformed into a mechanical form, reminiscent of the armors of his Wallachian heritage, with goat legs.

Renaming himself Doctor Doom, Victor founded a Permanent Autonomous Zone (PAZ) – also known as the Keep, or the Free Zone – in Copenhagen. Using his technology, Van Damme provided those who came to the PAZ with free food, water, shelter, and power in exchange for their loyalty. He marked them with a dragon tattoo that included microfibers through which he could control them against their will.

Van Damme sought to destroy Richards so as to eliminate rival knowledge of the N-Zone transporter capabilities. He used junk electronics to construct a swarm of fist-sized mechanical mosquitoes and sent them to attack the Baxter Building. Unprepared for the Fantastic Four’s new powers, the mosquitoes were quickly destroyed, and the Four travelled to Denmark to confront Van Damme.

The fight ended in a stalemate when S.H.I.E.L.D. and the Danish army intervened. Doom had ensured he was diplomatically protected by the Danish authorities, and avoided extradition. But Richards destroyed Victor’s control over his followers, turning them against him.

He turned his attention to business. Doom helped the bankrupt nation of Latveria become the ninth largest economy in the World within six months, and amassed a personal fortune of his own. Considered a national hero in Latveria, he exercised significant control over the government and set up base there.

He used his fortune to gain control of the company funding Dr. Mary Storm’s (mother of the Invisible Woman and the Human Torch) discovery of Atlantis. This allowed him access to the recovered treasures. He took particular interest in tomes of magic, and set about educating himself on their use.

Using the magics he found, he summoned Zvilpogghua – The Feaster from the Stars, one of Lovecraft’s great old ones  – which had been banished to the N-Zone. He implanted Zvilpogghua within Johnny Storm’s body. When it was detected it was believed to have infected Storm during his visit to the N-Zone.

If it couldn’t be removed, Johnny would have to be dumped into the N-Zone to prevent it getting loose.

After failing with every other option, as Doom knew they would, the Fantastic Four travelled to Latveria to seek his help. He acquiesced, on the condition that Reed secretly agreed to Doom swapping their minds. Reed realized Doom had orchestrated the whole thing, but having no other alternative to save Johnny, agreed. 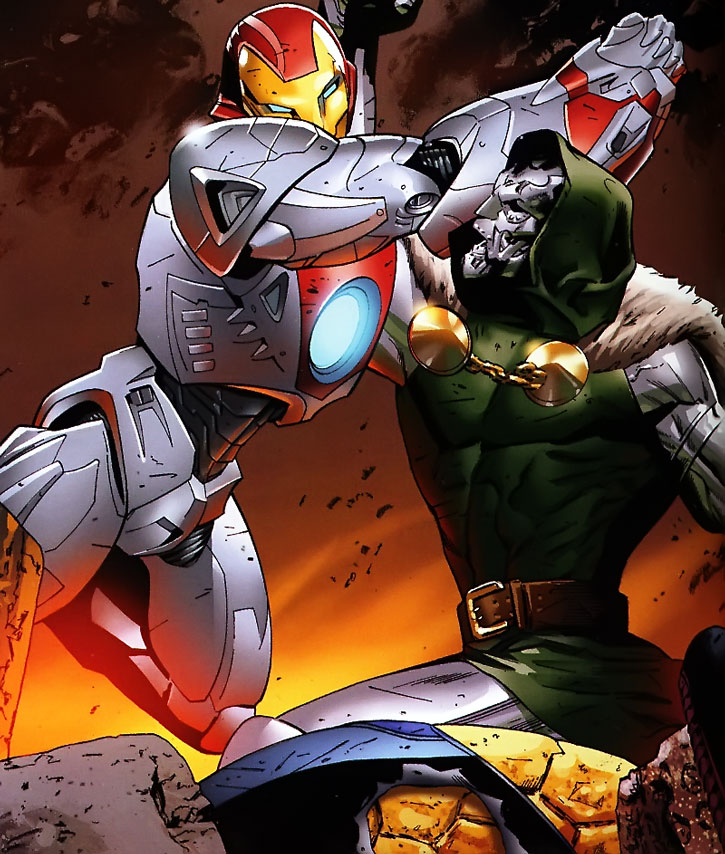 Returning to New York in Reed’s body, Doom ran into the zombified Fantastic Four from another dimension . These were free from their containment cell, but still trapped in the building. However, they had access to technology which would allow them to summon others from their homeworld.

Ignoring them, Doom performed the ceremony to remove Zvilpogghua from Johnny. He exorcised Zvilpogghua, but messed up the part of the spell to banish it back to the N-Zone. Zvilpogghua flew free until captured by Reed, now in Doom’s body, who took it with him to battle the Frightful Four (the zombies).

Reed threw the zombies back into their dimension and was about to follow through. He was still in Doom’s body and still hosted Zvilpogghua, so his plan was to exile himself to protect his home dimension. Doom, unwilling to let Reed have the noble death, reversed the mind transfer and stepped through the portal. He was now trapped on the zombie’s world.

Returning through unrevealed means, Doom stayed out of the limelight. He was approached by Nick Fury who wanted his help keeping an eye on one of Richards’ unauthorised experiments, sending probes to other dimensions. Doom readily accepted, and they infiltrated the Baxter Building to make changes both for Fury and for himself.

One of the probes caused devastation on its travel – secretly due to local interference. This resulted in local heroes, the Squadron Supreme, travelling to Doom’s Earth to arrest Richards. He went along willingly, but Fury organised a rescue mission which secretly included Doom.

Initially staying out of sight as the combined Ultimates, Fantastic Four, and X-Men battled the Squadron Supreme, Doom eventually betrayed Fury. Van Damme joined the battle himself, seeing a new world to conquer. Ultimately beaten by the Thing, Doom was revealed to be a robot and destroyed.

As part of a plan to have Magneto and the Ultimates deal with each other, Doom subverted Hank Pym’s Ultron robot into moving against the Ultimates. The robot murdered the Scarlet Witch.

When Magneto took her body to his Savage Land base, the Ultimates followed. Ultron was stopped, but not before Quicksilver was also apparently killed.

Magneto’s reaction didn’t limit itself to retaliation against the Ultimates. In fact, it proved to be more than Doom planned for. Shifting the Earth’s magnetic poles, Magneto initiated global disasters intended to wipe out humanity. Latveria and its people, along with much of Europe, were frozen.

Realising his miscalculation, Doom recruited Power Princess and Reed Richards to travel to the Squadron Supreme’s world. They brought back Nick Fury, who’d been left there for his part in the earlier incident. Magneto was stopped.

Returning to a snow-shrouded Latveria, Doom mulled over how to use the captive Namor, whom Richards had just captured. He was interrupted by the Thing’s arrival. Aware of Doom’s role in the disaster, the Thing was unwilling to let him plot further slaughters. He took Doom’s head in his hands and squashed it, killing Doom.

His mutated form originally had goat-like legs. However, these weren’t apparent when he added his additional armour (making him more similar to his 616 appearance).

The possible explanations are that he further mutated so his legs became more normal, the outer armour hides the deformed legs, or every appearance in the outer armour is actually a Doombot.

The latter is unlikely given he swapped minds with Reed while wearing the armour, and Reed would surely have noticed. It’s possible that was the true Doom, who didn’t return to the Ultimate Earth, and all subsequent appearances were Doombots he’d prepared.

This hypothesis is contradicted by the visible biological matter on the Thing’s hands when he killed Doom. This may still have been faked, or there could have been other Doombots left active who’ll appear in the future.

Arrogantly convinced of his own infallibility, he blames the accident that caused his condition on Reed Richards’ faulty designs. He sees himself as aristocracy, deserving of the respect and subservience of his lessers (which he sees as being everybody).

He seems intent on building up a kingdom for himself, whether physical or financial.

“Richards Richards Richards. I was perfect. I have always been perfect. You were never perfect. Scrawny little effort of a man. I can recite my family tree through six hundred years and I can recite the correct superpositioning code. Even now. Even now. You never understood that science is an art, not a system. Modern science comes from Descartes, who said that the conquest of nature is achieved through measurement and number. Do you know how he came to that realization ? He had a psychedelic experience with mushrooms in which an angel told him this was so. Your precious reason is all based on a hallucination. And you pit your invented ’phase-space theory‘ against my infallible instinctual knowledge of that which is right ? Your system was so utterly wrong that not even I could fix it.”

“Come on then. I’m waiting to kill you.”

“It’s me. I’m Victor. I constructed this entire trap and told Reed he had to swap brains with me to save Johnny’s life. This pathetic miscalculation was my doing, Professor. I take full responsibility.”

“Don’t be ridiculous. I am not without honor, Richards. And if you think I’m going to let you die saving the world you’re out of your feeble mind. Just make sure the record books explain that it was Victor Van Damme who carried hungry Zvilpogghua in his breast and saved the lives of six billion people.”

[Facing a world of zombified superhumans] “Hmph. Well, this should be a challenge.”

Prior to his arrival in Latveria, he lacked the Cell Rot power, the Occultist skill, his Local Hero and Scholar (Demonology) Advantages, his Connection, his armour, his rituals, and he had Serious Rage. His Wealth was only 008.

Following his access to Latveria’s resources, Doom often uses robotic replicas of himself to send into dangerous situation. They act exactly like Doom, and may be programmed to believe they are him.

Cell Rot added as a Mystic Linked power rather than a Ritual because Reed uses it when his mind is in Dooms body, whereas the other Rituals are only used by the body containing Dooms mind.

I think his immunity to Sue’s attacks on his vital organs is due to his lack of vital organs, rather than any particular magical protection. The Zombie Sue would have been used to fighting the Doom of their world, who may have been closer to the 616 version, so she was expecting vital organs where there were none. I’ve given him the No Vital Areas Advantage to cover this.

I’m not sure what Reed, whose mind was in Doom’s body at this point, meant by arcane protections. But I’m not entirely convinced that they’re there, and they certainly don’t seem to be required to model what we see, so I’m going to ignore that for the moment.

Source of Character: Marvel Comics, Ultimate universe (up to UFF #32). 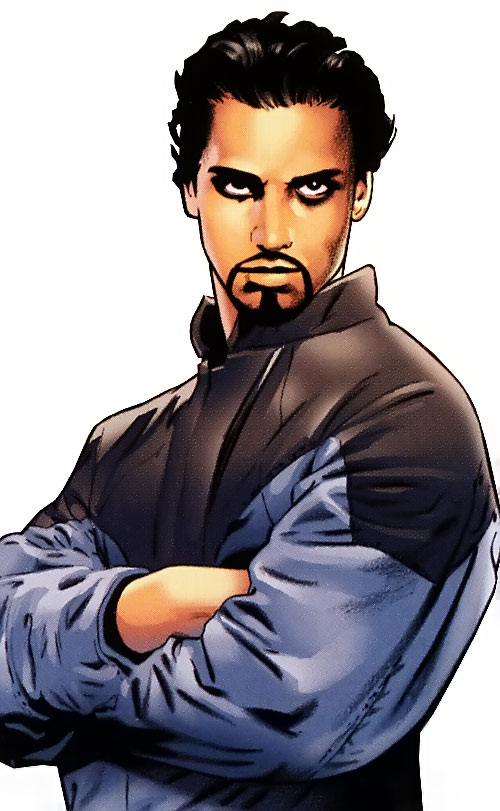 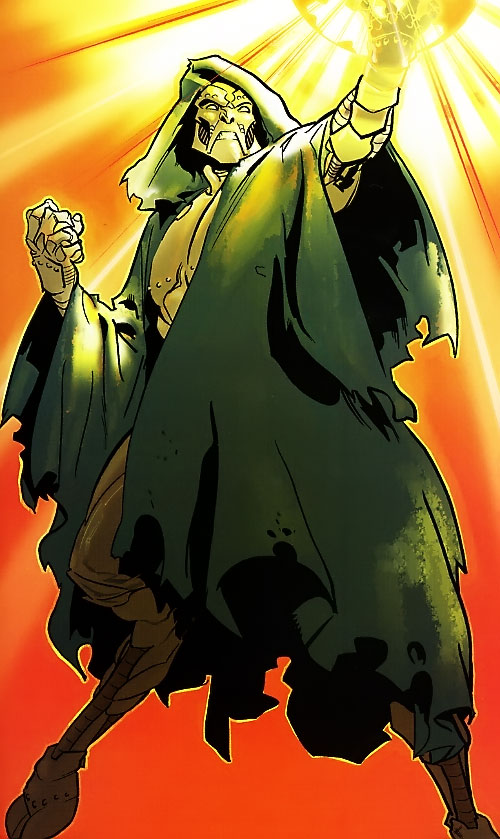 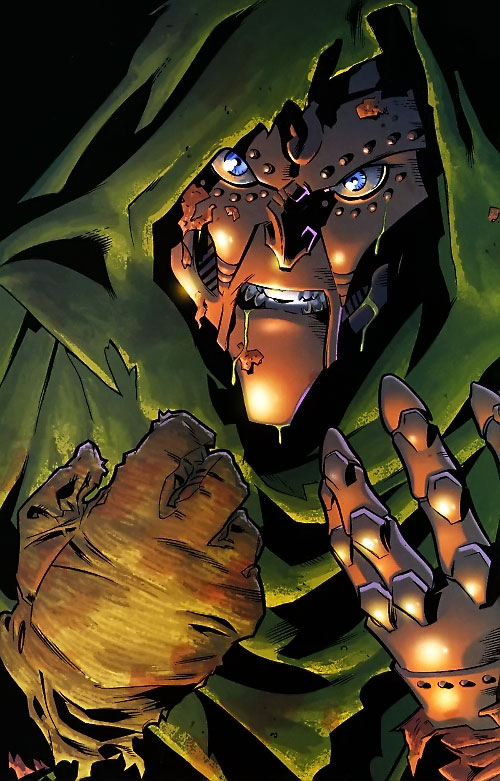 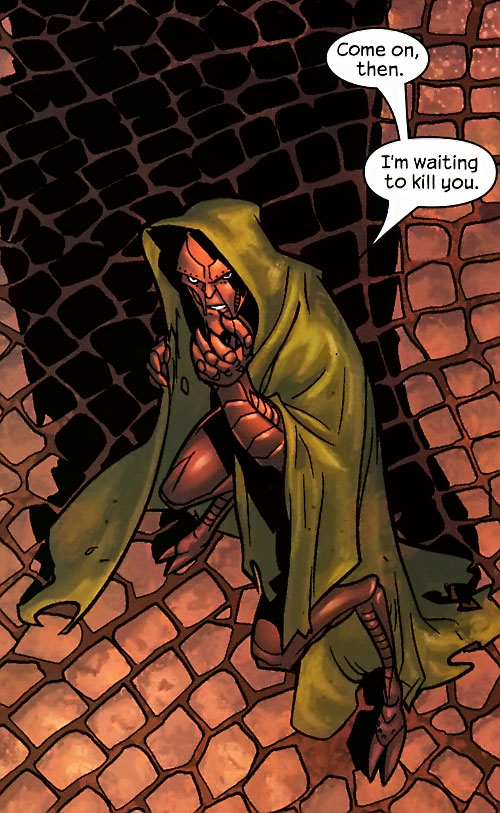