Dr. Dredd is a rarity – a Dire Wraith warlock. While normally only females can use magic, warlocks are those rare males who can wield spells. They usually are even more powerful than the females.

Dredd also possesses the shape-changing abilities normal to his race (though they are somewhat underdeveloped).

He also demonstrated an uncommon durability – most of the time. Although he wasn’t flattened by a punch from the Torpedo, and was unscathed when trapped in a burning laboratory full of chemicals. He also seemed vulnerable to being strangled by Rom in decaying human form, which is really weird for a shapeshifter.

Doctor Dredd, a powerful Dire Wraith warlock, apparently studied Rom and his allies for some time before he found a way to use his modus operandi.

Once he mystically discerned that the human Brandy Clark, a close ally of the spaceknight, secretly longed to become Rom’s lover, he struck.

His plan rested on the fact that Brandy and the recently deceased spaceknight Starshine had had an exchange of power before Starshine’s death. Dredd could use this link to make it much easier for Clark to mystically merge with the Starshine armour. He persuaded Clark to agree to be the subject of his mysticism. Soon the merging ceremony commenced.

The ritual was interrupted by Clark’s actual boyfriend, Steve Jackson. But Dredd easily Mystic Froze him and finished the ritual. The Torpedo intervened, punching Dredd straight across the room. But Starshine/Clark emerged from the infernal light. Having been mesmerized by Dredd before the ritual, she promptly defended him and took the Torpedo out.

Dredd then teleported her and himself away to kill Rom. However, when they reached Khystym (Soviet Union), they were in for a surprise.

Rom’s armour was now occupied by the artificial lifeform Quasimodo. Quasimodo had restored Rom’s humanity in exchange for the armour. But with Quasimodo’s paranoia :

Thus, when Dredd and Brandy-in-Starshine’s-armour arrived, there was no Dire Wraith backup, and “Rom” immediately attacked. The two newcomers counter attacked, and the new Starshine seemingly destroyed “Rom”. In actuality, she had expelled Quasimodo’s consciousness from the armour. But misunderstanding what had happened broke Dredd’s hypnotic conditioning on Clark.

Meanwhile Rom, his human form already terminal, strangled Doctor Dredd. Dredd crumbled into dust as Wraiths do, though it may have been a trick.

With the help of the new Starshine and the Gremlin, Rom’s consciousness was returned to his armoured body in time to save him.

In his chosen human form, Dredd has a definite flair for the somewhat campy and the definitely dramatic.

Doctor Dredd is a manipulator and a sadist. He relishes in using other’s repressed emotions and secret wishes against themselves. Dredd loves to mock nobility and chivalry – both directly, and by ironically pretending that his actions are gallant and for the good of others.

He’s pretty smart – his plan may well have worked if not for Quasimodo. Howbeit, his hunger for the kill and his sadism are a problem.

“You wish to become a spaceknight, Brandy Clark. As such, you wish to offer your love to Rom. For that you will need the aid and assistance of… Doctor Dredd !”

(To Steve Jackson) “Why, I am Doctor Dredd… and I am merely granting your girlfriend’s fondest wish !”

“Now, there are more important tasks to be accomplished ! The death and destruction of Rom, spaceknight — at the hands of the woman he loves ! Fare ill, human cattle !”

“Rise, my golden gladiatrix ! Rise and strike at he who has hurt you !”

“You forget, I am a Wraith — able to assume any shape, however vile !”

Y’know, it would make complete sense if the Limbo the Wraiths get banished in was the same Limbo as the DCU’s… and if Prometheus happened to contact them from his Crooked House. Yeah, I know Dredd was killed and not banished, but he’s a warlock and may have cheated death. His corpse looked much like a banished Wraith’s.

I have not yet worked on a Dire Wraith writeup, so Dredd’s Wraith abilities are only based on what he’s actually displayed.

Source of Character: Rom comics. For those of you who are going all “oh, I remember him !” let me be depressing and note this story was published in 1983. 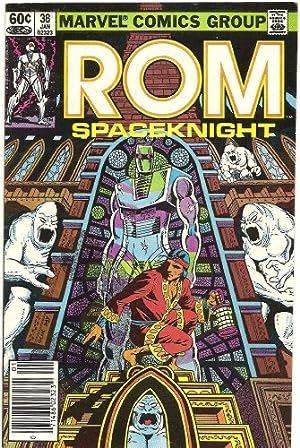 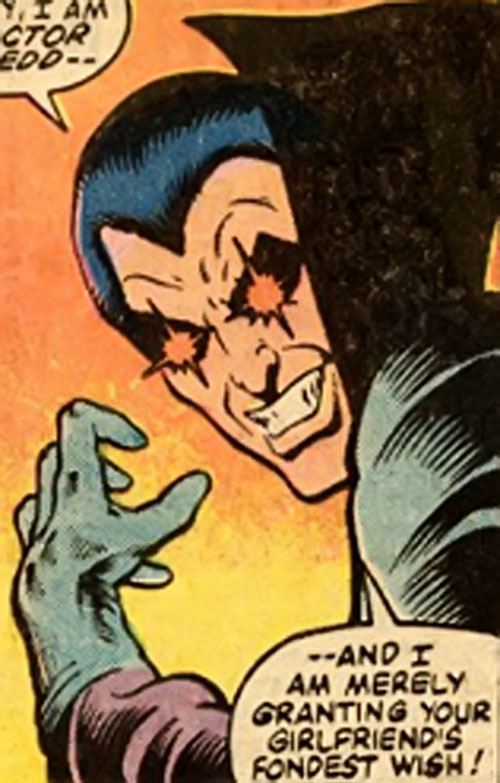