The Princess and the Frog was a 2009 Disney movie. It was credited as the first film in this “Disney’s Revival” era.

The character is voiced by fan-favourite actor Keith David  . Among many other roles, Mr. David was Frank (John Nada’s best friend) in They Live, Goliath in Gargoyles, Spawn, Admiral Anderson in Mass Effect, Solovar in the 2000s The Flash TV series, etc..

Dr. Facilier is a practitioner of Louisiana voodoo and hoodoo. He creates and uses spells, artifacts, potions, among other magical paraphernalia.

He also has “friends on the other side”. African masks represent these spirits. They work powerful spells for a price. 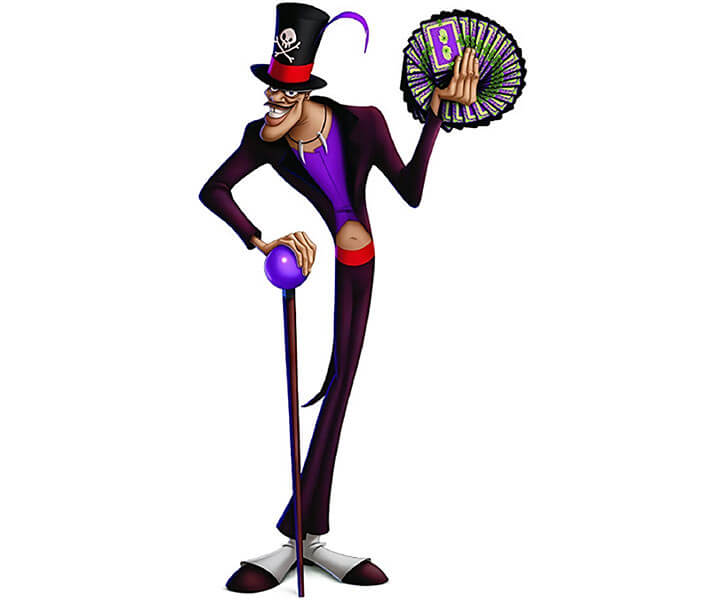 He can’t perform magic on his own person. Instead, he relies on gifts from the other side. Like the talisman and transformation spells.

He must beguile and manipulate people into doing what he wants. He distracts with his sleight of hand and is a master of lies – persuasive and cunning.

Tarot cards are not traditionally a part of voodoo, yet he uses them.

Likewise, the Voodoo dolls he uses only became a part of voodoo rituals in 20th century fictional stories.

Dr Facilier contacts his friends on the other side

Dr Facilier made his living as a fortune teller and miracle salesman. But his answering people’s desires came at a heavy price. For example, a bald man wanted hair. He got it, and it soon covered his entire body.

Facilier made it his practice to know the people of Nawlins“New Orleans” pronounced with a local accent. and important goings-on. Thus, he saw an opportunity when sugar baron’s daughter, Charlotte Le Bouff, took an interest in the visiting Prince Naveen.

Prince Naveen and his servant Lawrence met Facilier. Showing off his fortune-telling prowess.

Dr Facilier worked his will on the two. He offered each what they desired. They struck a bargain.

Prince Naveen wanted to be free and have money again, as he had recently been cut off by his parents. Facilier said he saw “green” for him, and turned Naveen into a frog.

Lawrence wanted a Prince’s life instead of his own. And so, he became Prince Naveen.

The deal with Facilier’s friends from the other side was sealed with the talisman used in the transformation ritual.

As Doctor Facilier explained, he couldn’t use voodoo on himself. He had to scheme and swindle to get what he wants. His plan therefore was to transform Lawrence into Prince Naveen, then marry him to the sugar-baron’s daughter.

The next steps were to kill Charlotte’s father, then use the La Bouff fortune to control New Orleans. 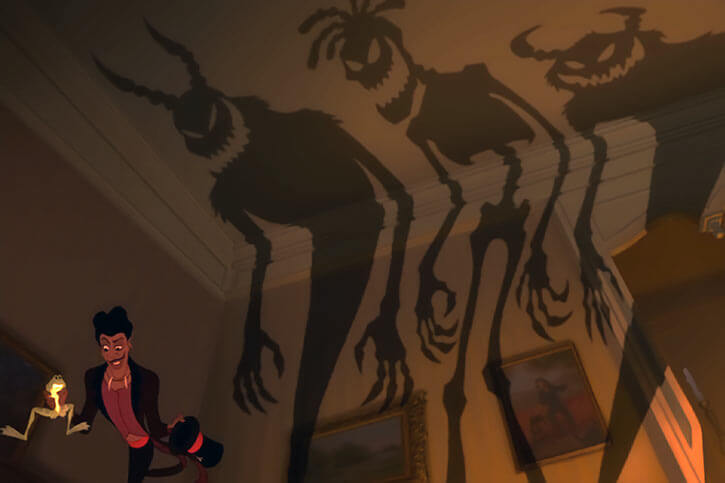 The Prince and a transformed Tiana, now also in frog form, escaped to the swamplands.

Tiana and Prince Naveen made some colorful animal friends in the swamp. They also sought help from the voodoo queen, Mama Odie.

The transformation spell that changed Lawrence into the Prince had nearly ran its course. Without the real Prince Naveen to draw blood from, their plan would fail.

Dr Facilier had to seek help from his friends again, promising them souls. They gave him several living shadows to hunt down the prince.

You got to dig a little deeper!

Mama Odie repelled the shadows with her magic. She also tried to give the two some advice, but it fell on deaf ears. They were intent on becoming human again.

So, Mama Odie told them how to do it. Because Mr. La Bouff was “king” of Mardi GrasAn annual carnival in several European cultures., that symbolically made Charlotte a princess. At least till midnight. And a kiss from a princess would return the frogs to human-form.

However, the shadows snatched up Prince Naveen upon his arrival in New Orleans. They delivered him to Facilier.

Tiana got the talisman and fled with it. Facilier caught up to her. He used illusions to tempt her. He promised to make her human again and give her the restaurant she’d dreamed of. Of course, she refused.

With the talisman broken and his plot undone, Facilier’s “friends” came to claim their debt. They dragged him screaming to the other side.

Tall and extremely thin. He’s got a prominent gap in his front teeth and unnatural purple eyes.

Dr Facilier speaks with a deep and engaging voice.

Facilier dresses like a stage magician with a bent towards voodoo trappings. He carries a cane with a red globe at the top. He looks like the Voodoo spirit of magic, ancestor-worship, and death, Baron Samedi. 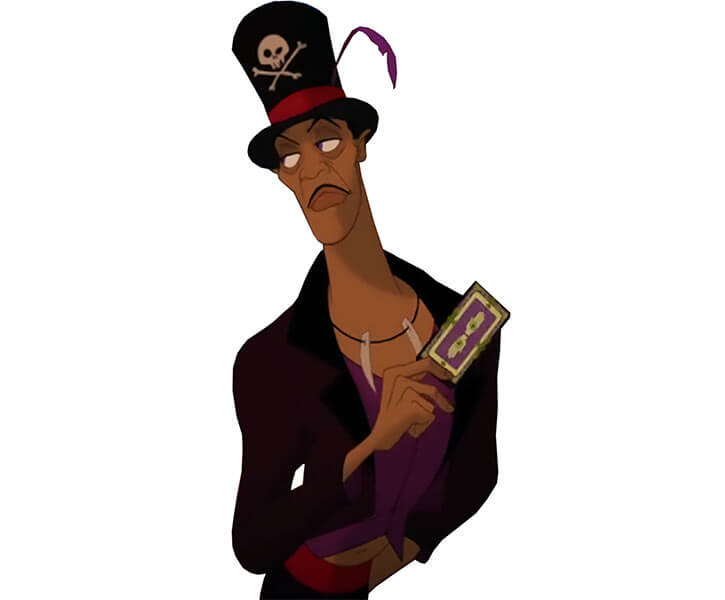 Dr Facilier wants power over the people of New Orleans.

Indebted to the supernatural beings of the other side, Facilier has been trying to pay them back for some time. This debt is always on his mind.

Facilier is always looking for opportunities. He makes deals with others granting their wishes. They’re kind of a monkey’s paw wish though. The wish granted comes at a price.

He’s manipulative and without remorse.

He investigates an individual’s past by reading their minds. He uses illusions to show what was and what could be. Tempting them to do what he wants in exchange for their desires.

Facilier is quick to anger and won’t stand disrespect. 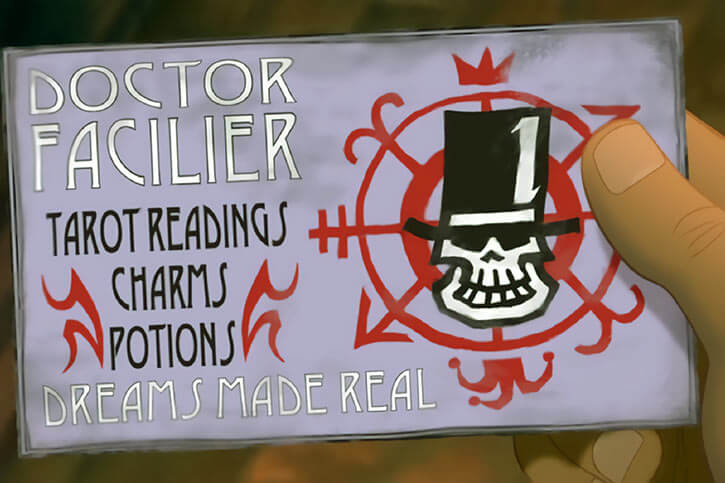 “I’ve got friends on the other side…”

(Appearing to read Prince Naveen’s palm).
“Were I a betting man – and I’m not. I stay away from games of chance. I’d wager I’m in the company of visiting royalty.”

“Come on boys, won’t you shake a poor sinner’s hand ?”

“Fun fact about voodoo, Larry, can’t conjure a thing for myself.”

“Friends, I know I’m in hock to y’all pretty deep already, but it seems our little froggy prince lost his way. And I need your generous assistance getting him back.”

Though a magic practitioner himself, I doubt Dr Facilier would want to challenge anyone on equal terms. He’d go after heroes and villains alike that are already in New Orleans and who know little about magic.

He would offer his “helpful magic” to likes of Rosie and the Demolition Team.

Madame Waxahachie works as a counter to Facilier. He would see her as a challenge and avoid her.

An interesting clash would be Dr. Facilier and Amanda Waller – perhaps during her clash with the Loa mob. 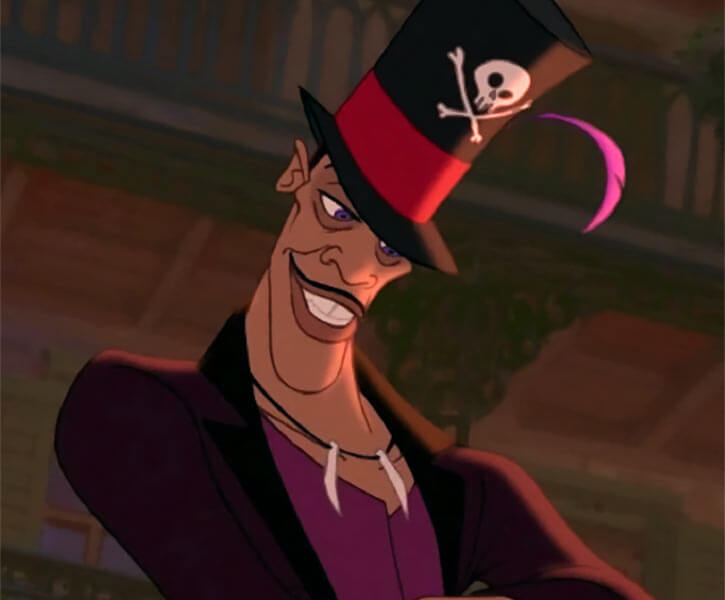 The other side (Low).

Miscellaneous: (Dr Facilier owes a debt, in souls I assume, to the other side.)

I’ve given these Rituals to Dr. Facilier, but they might be cast by his friends from the other side. For good or bad, Facilier’s spells have no effect on him.

Prince to frog
Effect: Transform: 06
Bonuses and Limitations: Transform may be made Permanent (+5) A kiss from a Princess cancels the transformation. (-1 FC)
Casting Time: 01
Components: None.
Special Restrictions: None.
Comments: Dr Facilier can undo or redo this curse at will. Unless of course it’s broken by the kiss of a real Princess.
Cost: 35

Servant to Prince
Effect: Transform: 06
Bonuses and Limitations: Humanoids allowed (+1 FC), Duration is 24 hours instead of RAPs earned (+1 FC)
Casting Time: 01
Components: None.
Special Restrictions: A drop of blood from the copied individual of the spell. In this case Prince Naveen. The drop of blood must be stored inside the talisman and worn. As time winds down, the blood is used up. When the blood runs out the transformation ends.
Comments: Removing the voodoo talisman will remove the transformation. But putting the talisman back on restores it.
Cost: 32 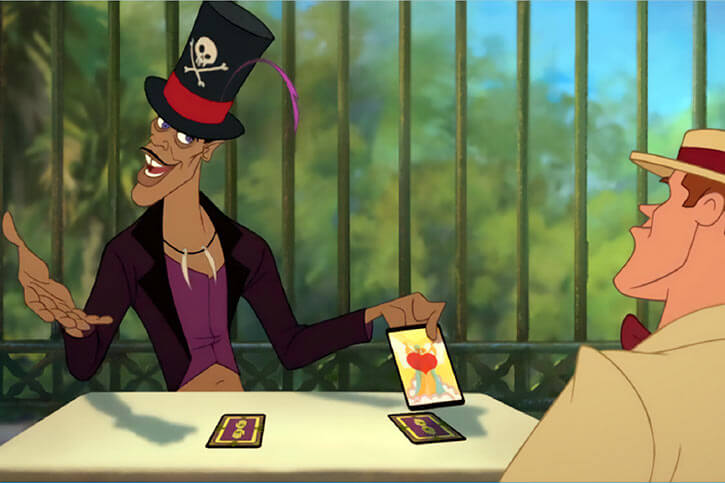 I don’t mind your shadows

All shadows from the other side have the same stats as Facilier’s shadow, below. 20 were summoned to help re-capture the frog-prince.

Running is the shadow racing along surfaces.

Attack Vulnerability -2 C.S. to RV vs Light based attacks.

In this film, the Disney-verse hell is filled with shadows. It appears the shadows are people’s souls. Good souls are white shadows while evil souls are black. Facilier used voodoo to detach his own shadow. It can act on its own.

The shadows had a demonic appearance. Some had wings or tails, some took the shapes of animals. These demonic shadow creatures could interact with other shadows. For instance, grabbing the Prince by his shadow’s leg.

Destroying a shadow banishes it.

Facilier’s friends would be considered the Loa. While, he would be a left-handed Bokor (meaning he uses magic for evil).

All his powers are used for the “show” he puts on when trying to entice a new victim. He never uses them for other purposes.

Dr Facilier spoke one word of French. I gave him the Louisiana (aka Cajun) French since it is traditionally spoken in lower Louisiana.

In an early script, Dr Facilier would’ve been Mama Odie’s son. The idea was scrapped.

Audiences criticized the film calling it old fashioned. The word “Princess” in the title was also a problem. Later films like Tangled and Frozen would avoid this.

Source of Character: The 2009 Disney animated film The Princess and the Frog, character voiced by Keith David.

Writeup completed on the 6th of September 2019.