Faustus’ abilities and technology continue to evolve, but his modus operandi stays generally similar. A wholly new factor appears, however… or maybe it doesn’t.

A general introduction to physioanalysis, part 1

During this era, Faustus starts displaying what certainly resembles a healing factor . However :

A general introduction to physioanalysis, part 2

In game terms this is fairly straightforward. Writeups.org uses evidence-based statting. So Faustus gets enough of a healing factor in his stats to explain his observed durability, irrespective of what Marvel Comics says.

In less game-specific terms, we suggest using our proposed Leòn Genetic Sequence framework. It’s a low-flash, unintrusive explanation of why so many people in the Marvel Universe do not seem to age much, and keep recovering from terrible wounds.

Officially (going by his most recent profile, in the 2008 hardback edition of the OHOTMU) his durability is normal. But the entry does note that he presumably developed means to retard his ageing.

The latter is interesting. Faustus seems to have extensive knowledge of Captain America’s physiology. For instance by his first appearance he had developed a pill that could somehow cancel all anagathic  effects of the Super-Soldier Serum.

It is possible that Faustus gained some sort of exclusive knowledge about the Serum and used it to reinforce his own body against age and wounds. The simplest explanation is that it happened when Steve Rogers was his therapy patient.

Three contributions to the theory of mechs 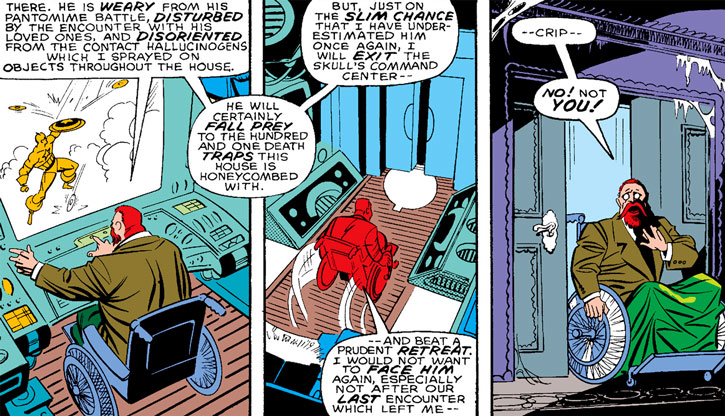 Civilisation and its discontents

Faustus also hires good, professional mercenaries, armed with assault rifles (mostly) and submachineguns (sometimes). Use shock trooper stats from our Stock Soldiers article, and note that these men are conditioned to follow any order directly given to them by Faustus unless it’s suicidal.

Faustus also worked with a half-dozen mercenary, unethical doctors (though they were clearly less competent than he, and thus simple hirelings) plus enough personnel to run a clinic.

After he was narrowly defeated by Reed Richards, Dr. Faustus had a nervous breakdown caused by his hallucinations of his mother.

While he recovered and escaped from prison, he also found himself stuck in a wheelchair due to the wounds suffered during the National Force plot.

As previously discussed, there’s a continuity glitch about the damage to Faustus’ back. Our proposed No-Prize Hypothesis  is that he healed quickly from the major damage – see the Powers & Abilities section for more. Thus, when confronting Reed Richards he was no longer in a wheelchair.

However, our No-Prize Hypothesis goes, he had started walking again too early, probably out of ego. Between not giving his body enough time to heal, and his immense body mass weighing on his back, Faustus undid his recovery. He was thus forced back into a wheelchair for his next appearance.

Wanting to gain revenge on Captain America for his crippled legs, Faustus discretely moved in into the base of Cap’s greatest enemy – the Red Skull (Johann Shmidt)’s Skull House. Once he was ready, he produced enough suspicious activity there to reel Captain America in.

The following preparations in the Skull House were textbook Faustus and can be used as a template :

Infuriated, Faustus then activated all the traps in the Skull House, hoping that the weakened and battered Cap would fall prey to them. But as he rolled his wheelchair out of the command centre, he was suddenly confronted by what seemed to be the actual ghost of the Red Skull.

The spectre was incensed that Faustus was using his house and his library, and fighting his nemesis. It attacked Faustus and choked him. Though it did not manage to kill the huge man, it left him in a state of shock bordering on coma.

Faustus fully recovered over the following years, and his legs and back healed too. He escaped from prison during the early 1990s. By late 1993 he was still often using a wheelchair, but could amble with crutches and braces the rest of the time.

He attempted to establish himself as the equivalent of the Kingpin for Florida. This likely was because by then he had no large criminal organisation to fund his activities, as the Secret Empire and the Corporation had once done. 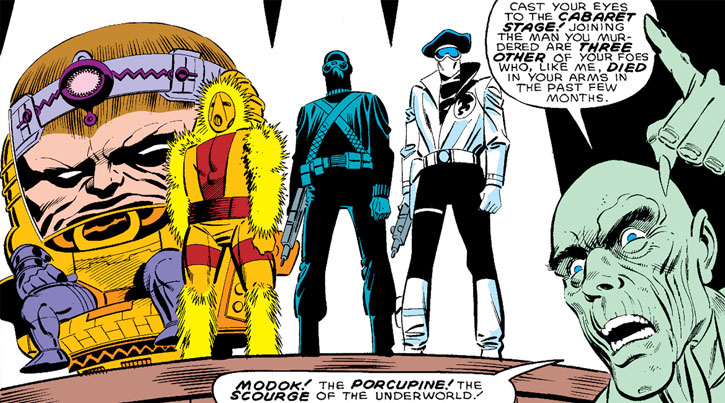 The LMDs deployed at the Skull House, plus the hologram of Johann Shmidt.

This meant displacing the current crime boss, the Slug (Ulysses Lugman). To do so Faustus hired very minor mercenaries the Wanderers, who captured Nomad (Jack Monroe) while he was stinking drunk.

Nomad was at that point in Florida, and Faustus had experience with him back when Monroe was a “patient” at his Institute, before the National Force plot. Nomad had also almost killed the Slug in a previous clash.

Using massive amounts of drugs, Faustus again brainwashed Jack Monroe. Since this time Monroe was the main subject, Faustus dug into his traumatic, repressed childhood memories. This was successful and turned Nomad into an obedient if savage hitman, convinced that he was a born Nazi and bloody-handed betrayer.

However, Monroe’s ally the shady Giscard Epurer warned Captain America in time for Cap to save the Slug and face Monroe. Shaken from Faustus’ control, Jack beelined back to kill the giant psychiatrist. However, Faustus stopped him by offering to erase Monroe’s childhood memory in exchange for dropping his vendetta.

Faustus started by unearthing the bulk of Monroe’s traumatic childhood memory, which was allegedly a necessary step of the procedure. As this segment ended, Monroe flipped out and attempted to kill Faustus. Captain America again stopped him, and Jack agreed to drop the gun and let Faustus go.

However, five weeks later, Nomad sneaked into the minimum security prison where Faustus was being held. He murdered Fennhoff by shooting him right between the eyes with a .45 handgun.

Return of the repressed

For more than a decade, Doctor Faustus was assumed dead. As it turns out, Johann Fennhoff was not only still alive, but his legs and back finished fully healing and he developed his brainwashing and hypnotic techniques to new heights.

Doctor Faustus would thus resurface in 2006, as part of the Red Skull’s incredible machination that killed Captain America.

Cap once notices that Dr. Faustus is a nailbiter. That his nails are chewed to the nub might give Faustus away in some circumstances, I suppose.

No special changes in characterisation, though Faustus does seem a bit more on the sadistic side now. Perhaps his failures and his handicap have embittered him.

“Bring the chlorothiazide up six ccs… Another six… Another ten on the methaqualone, stat…”

(Sarcastically) “This session is over. I will send you my bill.”

“I can be persuasive when I want to, Captain. You know that.”

At this stage Faustus is more of a bit player, though his assault on Cap at the Skull House was genuinely dangerous.

The equivalent would have been clashing with the Batman using the “ghost” of either Ra’s al Ghul or the Joker, then tangling with one of the forgotten 1990s DC Comics heroes, such as, say… Gunfire or Joe Public.

Advantages:
Genius (Limited to applications having to do with the mind), Language (German), Scholar (Psychiatry and psychology).

Faustus doesn’t seem to have trained to fight in a wheelchair or with crutches – he’s neither Barbara Gordon nor Silhouette Chord.

That effectively reduces him to DEX 02 STR 02 BODY 03, as his handicap greatly reduces his range of movement. In some corner cases where crippled legs aren’t a factor (for instance he’s lying on his back and lifting away something pinning him down) he can use his nominal Attributes.

Faustus’ intellectual skills are slightly sharper than before. However note how his Connections, Hero Points and Resources took a hit.

This is where villain decay  set in for Faustus during this era. He’s still a genuine threat, but he’ll have to fold earlier than he would previously have.

Skull House it has a crowd, there’s always something happening

It’s interesting to ponder how Dr. Faustus rounded up such an arsenal without apparent resources. Perhaps everything was procured on-site at the Skull House, but if so why did not S.H.I.E.L.D. confiscate everything ?

Perhaps everything was booby-trapped to the nines, but Faustus had a way to neutralize this security (guessing passwords based on the Skull’s history and mindset, and the fact they’re both Germanophones raised in early XXth century Mitteleuropa ?).

The main “weapon” at Skull House was an HALLUCINOGEN greatly increasing suggestibility. It works very much like the HIGH FREQUENCY SCRAMBLER once used against Reed Richards, but without the telltale headache. Like with the SCRAMBLER, it suspends suspension of disbelief and will let the subject’s mind fill in all the little blanks and help make illusions convincing. The subject will remain convinced that they are sceptical and not influenced, but their brain chemistry is betraying them at every turn.

One gathers that the hallucinogen was present both as an aerosol and as a coating on surfaces that would likely come into contact with the subject. The coating could penetrate even such robust fabric as Captain America’s gloves.

Quite similar to the one once used against Cap in Manhattan, but even more subtle. Detecting the effect of this new formula would still require Analytical Smell/Tracking Scent, but the OV/RV is now 12/12.

It is a Power Drain. To simplify it attacks BODY/BODY with 12/10 (Sealed Systems and Systemic Antidote apply), and the RAPs are subtracted from all EVs from muscle-powered attacks such as punches, kicks, grapples, most melee weapons, thrown weapons, archery… The EV cannot be lowered under 02. It is possible to Recover from those RAPs normally, once removed from the gas.

This effect only affects EV, and only applies on attacks against moving targets. For all other applications such as acrobatics or attacking immobile objects, the target’s strength is intact. It makes it practically impossible to detect that something is wrong.

Apparently, Faustus’ LMDs were programmed to “sell” the impacts (like a stunt person, or a wrestler in a staged fight, would), reacting as if hit with full strength. They do not actually take the RAPs, but they act as if they did, throw themselves back, etc.. This likely could be detected, but with the HALLUCINOGEN nobody’s going to be able to make that roll.

These LMDs  are the good ones, closer to being synthezoids . Cap was straining to detect whether they were robots, but hitting them was exactly like hitting a living person made of flesh and bones.

They come with DEX 04 STR 03 BODY 06, Regeneration: 06, and are programmed with Artist (Actor): 04 and Weaponry: 04. Both Skills have a limited span – Weaponry only applies to one weapon the LMD is armed with, and Artist only applies to the programmed role and to stage combat (such as “selling” blows as mentioned above). 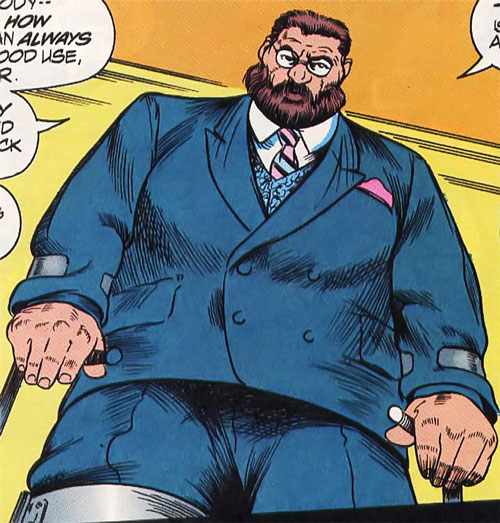 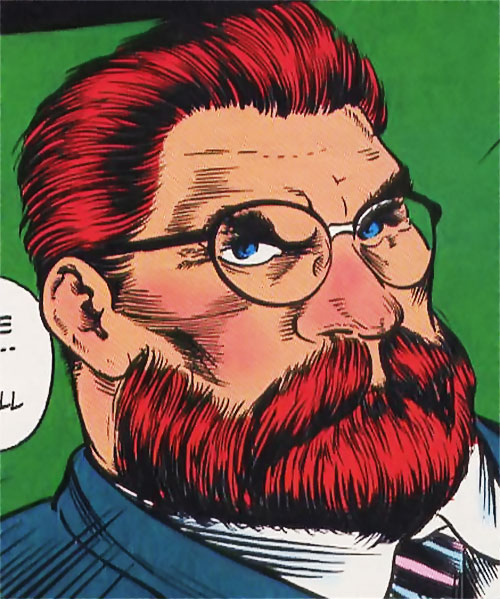