Lansing is a skilled doctor and medical researcher. He also seems to have significant technological skills. But his tech always has a medical aspect, centring on affecting the body and/or mind.

The men working security for Lansing are unusually competent and well-equipped. They have access to stunning energy weapons of incredible potency. Their uniforms look like this : 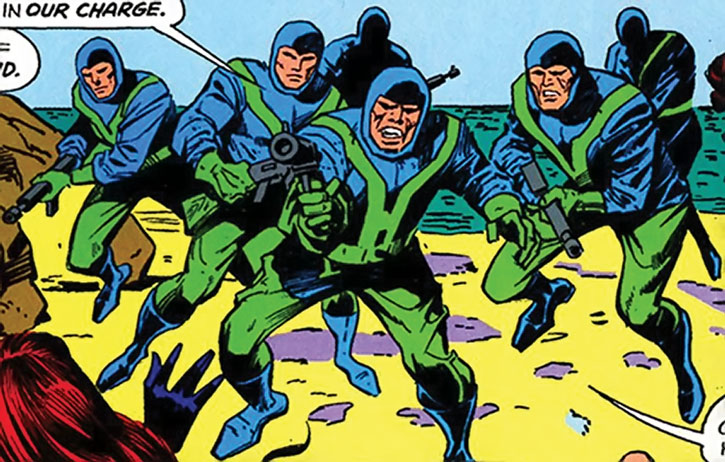 About a dozen experimental subjects of Lansing’s were spotted. They are strong, but not superhumanly so, and their ageing process is slowed down. However, they are also intellectually disabled.

The most successful subject is called “Old Billy”. ;Although his face and hair are clearly that of a septuagenarian (and one who has been through severe hardship, at that), he has the physique of a top athlete in his mid-20s. Billy has not received any training and fights in a very simple manner, but his speed and strength are nearly superhuman. Old Billy is illustrated below. 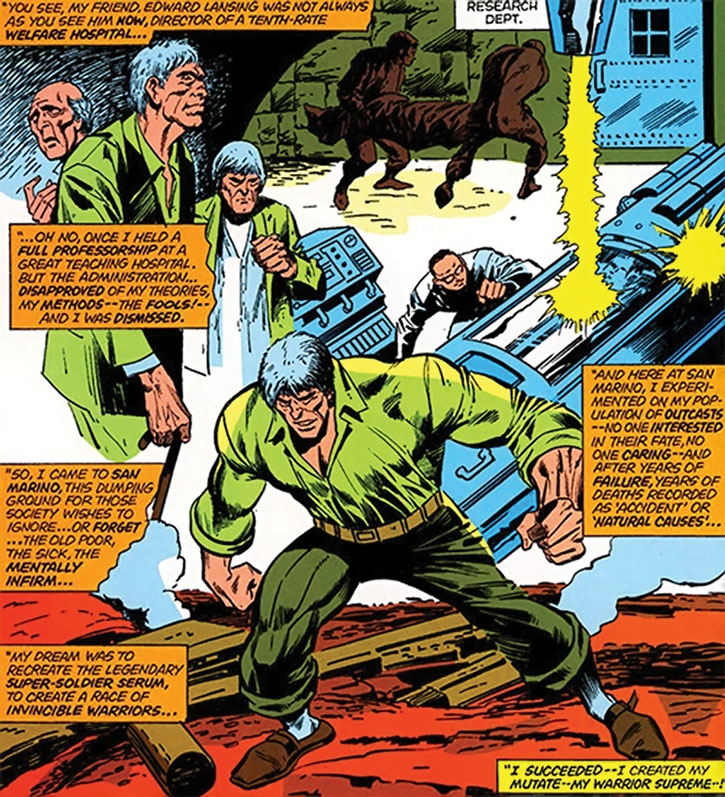 Lansing used to be a tenured researcher in a major teaching hospital. He was, however, somewhat insane. Dr. Lansing was obsessed with his life’s work — recreating the Super-Soldier formula — and had no major issue with killing subjects in the name of scientific advancement.

His theories dismissed (the fools !), he had his professorship revoked. Edward Lansing became a lowly practitioner in a lowly welfare hospital somewhere near Malibu, CA.

Dr. Lansing continued his research. He now lacked sophisticated equipment but had an endless supply of ailing homeless people. Few would enquire about these subjects after they went missing. Against all odds, Lansing’s research program succeeded, turning the aged bum Old Billy into the first of his “warrior race”.

Although he turned more homeless men into peak human specimens, Lansing struggled with a side-effect of his formula. His subjects were enhanced, but also became child-like simpletons prone to homicidal rages.

One winter day, Old Billy escaped to the beach. There he ambushed the strolling Hercules and Black Widow. Although he did not accomplish much and soon surrendered, Lansing’s mercenaries caught up with him. They stunned everyone with a special pistol.

Dr. Lansing anticipated that the other Champions might become a threat to his plans. To prevent this he he brainwashed Hercules and the Widow using his proprietary technology. He then sent them after the rest.

Hercules proved unstoppable. But the Widow regained her free will just before she would have killed Ivan, and went after Dr. Lansing. She crushed his mind-control box, freeing everybody from Lansing’s yoke.

A fitting end for his kind !

Lansing panicked and fled down the beach. But the vengeful experimental subjects caught up with him and likely ripped him into pieces. His apparent corpse was still on the beach by the morning, with his subjects shuffling around without any idea of what to do next.

What happened next to the superhuman homeless men was never revealed. Having them as Player Characters  would certainly make for an unusual campaign.

“Hardly insane, my dear — I am a visionary, a man who will expand the frontier of human knowledge.”

“This is no toy, woman — this neural disruptor will fry your nervous system in an instant !”

Lest the gods shall fall !

Lansing’s technology seemed to be more efficient on Hercules than on the Black Widow. Yet Hercules has a massively superhuman constitution.

My theory is that Lansing has unwittingly stumbled upon some x-factor that makes his technology far more efficient than it should be on Olympians — and most likely on Asgardians , Heliopolitans and other godly peoples. He probably never realised it, though. The second Stroke of Genius in the stats is based upon this hypothesis.

This speculative effect is treated as an incredibly obscure Attack Vulnerability for gods, earning them no points given its rarity. The OV and RV of gods against Lansing’s unique technology are both diminished by 3 CSes.

The other vagrants are not as strong as Billy – but they are clearly enhanced. There seemed to be about a dozen of them. 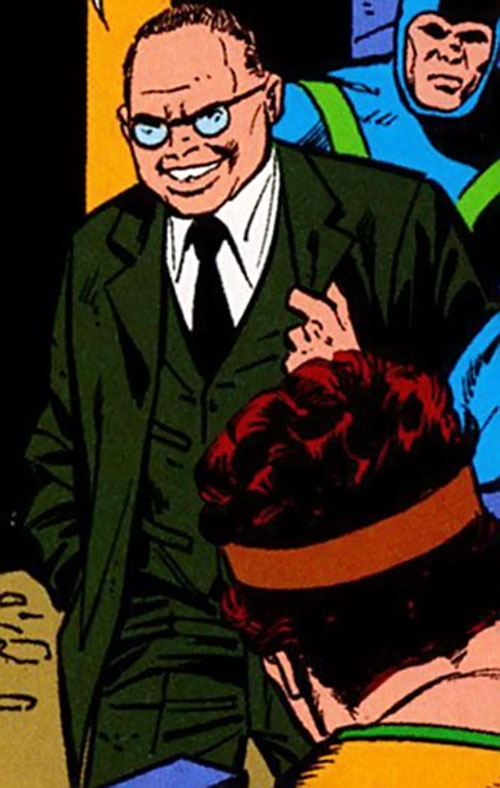 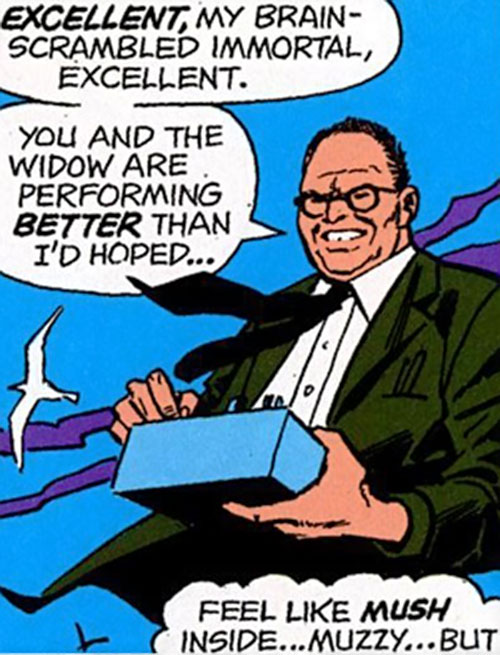