Dr. Mid-Nite is a brilliant physician, an accomplished gadgeteer  and all-around scientist. He is also a formidable fighter, though not in the league of some more experienced heroes.

He has the ability to see clearly in total darkness. This is a side-effect of the accident that robbed him of his normal sight.

A prodigy who obtained his medical degree while still in his teens, Pieter Cross was a gifted surgeon. However, his inability to work within the system led him outside of established medical circles.

Pieter used his great wealth, talent, and formidable network of contacts to provide health care for the city’s homeless. He also had a wide range of other patients whom orthodox medicine had failed. This earned him the street nickname “Midnight Doctor” and a loyal following of helpers.

Land of the blind

While investigating the influx of a new and dangerous mutagenic steroid, Dr. Cross was surreptitiously given the drug by agents of Praeda Industries. Praeda was a monolithic corporation run by Batman’s old enemies, the so-called Terrible Trio, who stood to profit from the drug.

The chemical interacted with others in the doctor’s bloodstream. When an explosion robbed him of his eyesight these chemicals allowed Cross’s eyes to see in the infrared spectrum. Special goggles of his own creation augmented his remaining sight to the visible spectrum.

Cross then borrowed the identity of the original costumed adventurer and Justice Society stalwart of the 1940’s. The new “Doctor Mid-Nite” set about saving the city from a destructive scheme by the Trio, and toppling their corrupt financial empire.

He has since dedicated himself to protecting the downtrodden of his city from any new threats, while continuing his underground “practice” and philanthropy.

Pieter Cross is a handsome, if somewhat severe-looking thirtyish man. He has short, slicked-back black hair and an intense demeanor.

As Dr. Mid-Nite, he wears a black bodysuit with a dark-red vest and leggings. He wears heavy brown leather boots and gloves studded with small pockets for his various gadgets. A brown belt circles his waist, and his head is covered with a dark blue full-faced mask, adorned only by his goggles and a white crescent-moon symbol on his forehead.

Lastly, a long black cape with a curved hem flows behind him.

Dr. Mid-Nite comes across as a sort of kinder, gentler Batman. He’s very intense about his self-appointed crusade for justice (both criminal and social), but even more so about his compassion for the people he protects and administers to.

He’s a very resourceful man, with a quick (if not always entirely successful) solution to any problem. He’s also extremely charismatic, easily commanding people’s loyalty by providing them with a sense of hope and the feeling that he truly cares about them.

“Gentlemen, I have a Hippocratic Oath to uphold, but… Believe me… At this point I highly advise you to stay the hell down !” 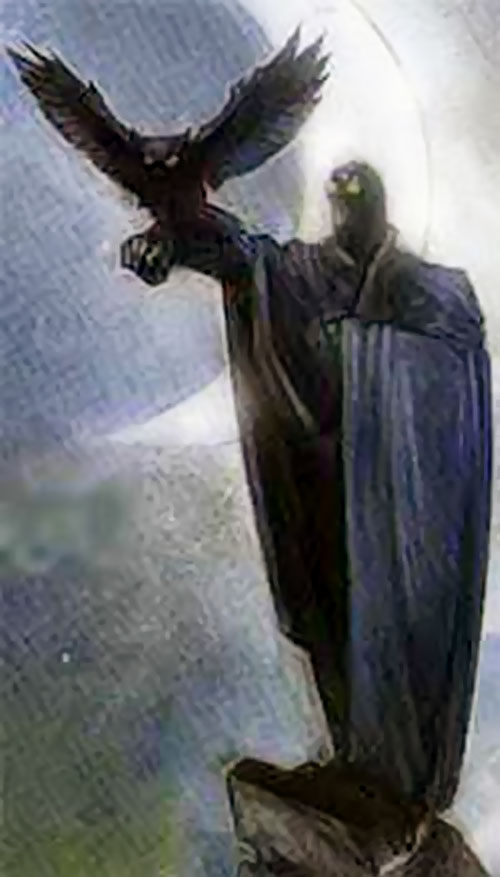