Doctor Mid-Nite’s power was the ability to see in total darkness.

In addition, Mid-Nite used a combination of athletic training and equipment designed to compensate for his principal liability, a lack of day vision. This equipment included :

In 1941, the police called Dr. Charles McNider to treat a wounded informant. The highly skilled physician and medical scientist did save his patient. However, a mobster sent by “Boss” Maroni hurled a grenade in the hospital room to finish the snitch. Only McNider survived, but he was blinded for life.

Dr. McNider’s faithful nurse Myra Mason followed him in his new career. Though he could no longer be a doctor, she acted as a stenographer as he became a crusading writer. McNider denounced crime and criminals in exposés and novels. Yet, he felt that it wasn’t enough.

A familiar scene occurred as a owl crashed through McNider’s study’s window as he was pondering his situation. Reflexively taking away his eye bandages, the ex-doctor discovered that he could actually see — but only in darkness. He soon designed special infra-red lenses that allowed him to use his night vision even in broad daylight. He also tamed the owl, and named him Hooty.

(The period text explains that McNider’s eyes are like an owl — “the iris of the eye cannot close off light to the proper degree and so the owl is blinded by daylight”.) 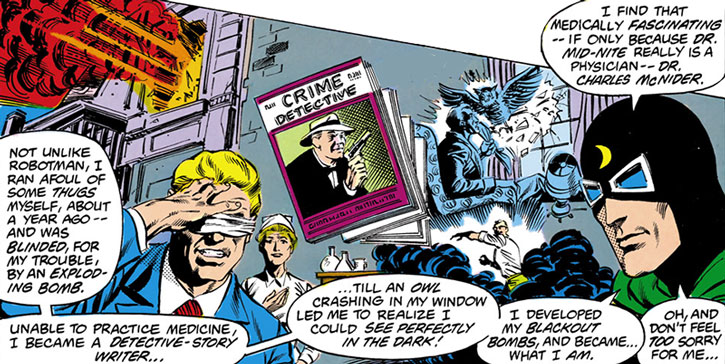 As his “Doctor Mid-Nite” identity emerged, McNider also built “blackout bombs”. These were smoke grenades creating darkness in which he could easily see but his enemies couldn’t. He also decided to deceive everyone — including Myra — and pretend that he was still blind, to protect his new secret identity.

Dr. Mid-Nite then saved a witness whom Maroni had nearly killed. He came to the hospital and operated anonymously and in the dark, as only a surgeon of his skill could hope to save the witness. Dr. Mid-Nite then arrested Maroni.

Trust him, he’s a doctor

As McNider, he continued to write (including about Dr. Mid-Nite’s adventures) and do scientific research for medical applications. He also occasionally consulted for the military during the war.

As Dr. Mid-Nite, he chiefly battled the mob and other ordinary criminals. He was a founding member of the All-Star Squadron and the Justice Society of America, but did not operate on the level of the better-known members of these organisations. 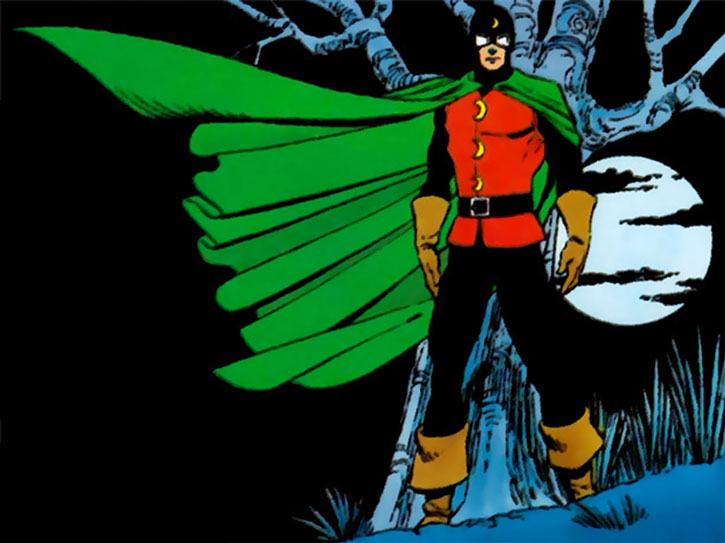 After the war, Dr. Mid-Nite graduated to minor super-villains such as sort-of-nemesis Doctor Light, or forgotten criminals such as Sky-Raider or the Baleful Banshee. He also focused on his research at his expense of his writing – specifically optics and means of curing blindness. In 1951, along with the rest of the JSA, he refused to unmask and disappeared.

When the JSA reassembled in 1963, Dr. Mid-Nite was among them. However, his priority by that point was medical research and ophthalmology. With age his eyesight failed and he became fully blind. However, fellow researcher Gordon Ogilvy built a device allowing a very low level of vision, upon which McNider could then considerably improve.

In the 1980s, McNider was working as a physician in Los Angeles. He also occasionally consulted for the young heroes of Infinity, Inc.. His most gifted resident, Dr. Beth Chapel, was blinded by an explosion during the Crisis on Infinite Earths. However, she discovered she could see in darkness and became Dr. Midnight. 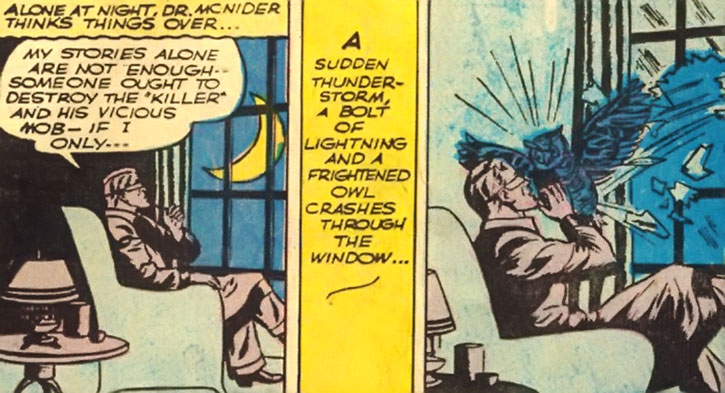 As to McNider, he joined the JSA in Limbo and was thought gone forever in order to forestall Ragnarok.

During the Zero Hour  crisis, Dr. Mid-Nite and his JSA colleagues engaged Extant but were hit by a brutal ageing attack. He, Hourman and the Atom died of old age as a result. As to Dr. Chapel, she was slain by Eclipso.

Charles McNider was a dedicated physician. He worked diligently to expand medical knowledge through research and to aid the community through his clinic. 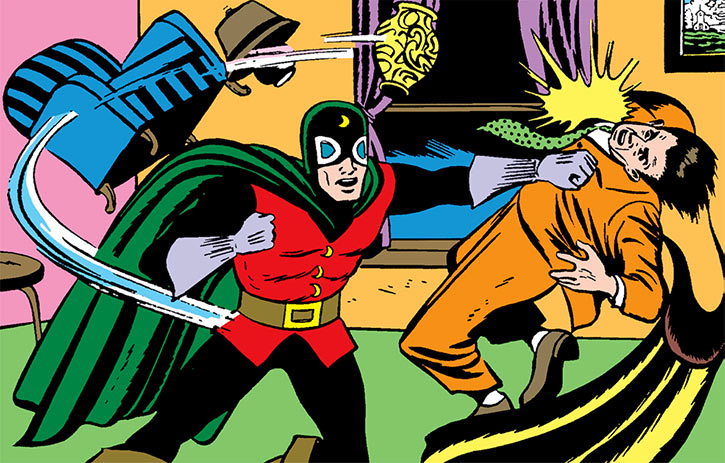 For McNider, his superheroic persona was a means of stopping others from getting hurt. It was thus secondary to his role as a doctor under normal circumstances.

Like most of the Golden Age JSAers, McNider takes the role of mentor seriously, though his focus was more on training new medical workers at his clinic. He still provided support to his colleagues whenever they needed him.

Hooty is Mid-Nite’s pet owl. His stats are as follows :

Compiled by Sébastien Andrivet — stats from the World at War sourcebook. 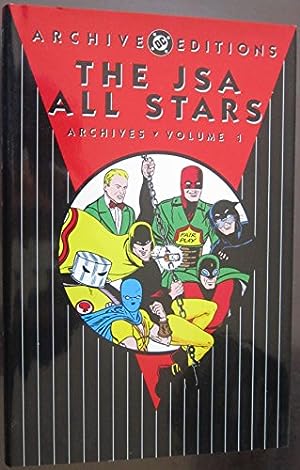 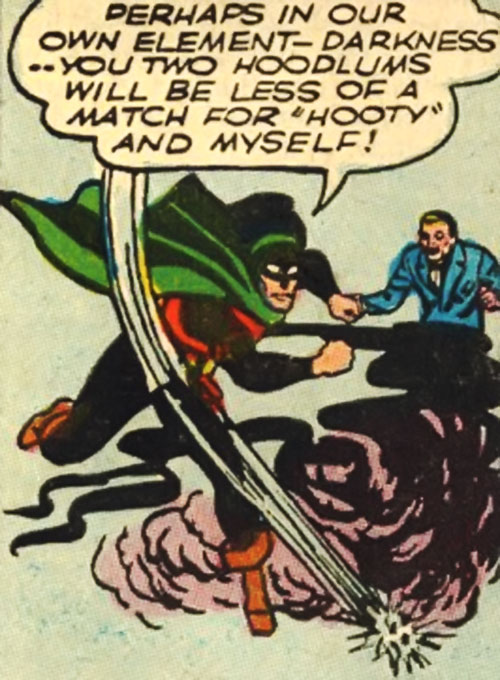 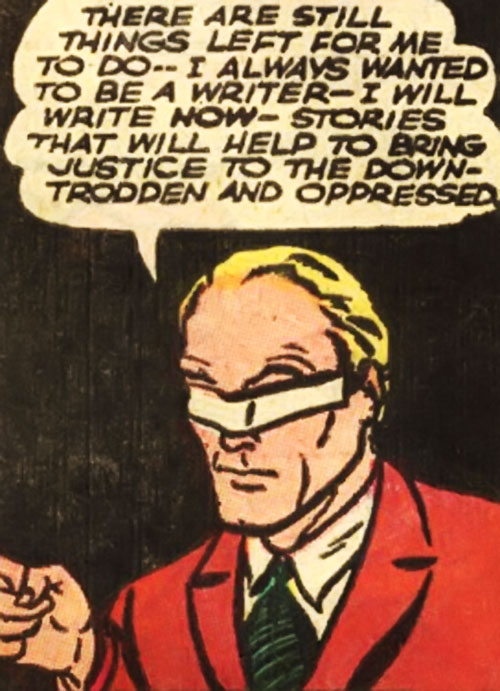 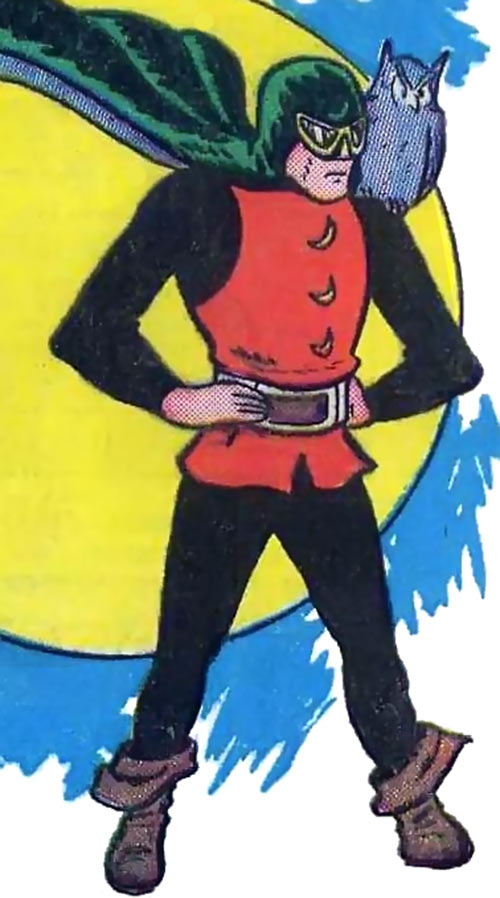