Doctor Midnight (Beth Chapel) is one of the legacy DC Comics characters who appeared during the Bronze AgeSuper-hero comics from (roughly) the mid-1970s to the early 1990s.

She was the first successor of Doctor Mid-Nite (Charles McNider). Note the difference in spelling, which can be a bit confusing for searches.

Appearing in 1985 in Infinity, Inc., she was among those legacy characters whose wings were clipped by the Crisis on Infinite Earths.

She was eventually killed off. The Mid-Nite legacy was then left fallow until 1999 and Doctor Mid-Nite (Pieter Cross).

A new version emerged during the 2010s. But that’d be another, different character profile.

Doctor Midnight is blind in normal light. However, she has the superhuman ability to see clearly in darkness, no matter how complete it is. She also appears to be able to see through smoke, opaque gasses and other suspended particles.

Doctor Midnight has unusual physical strength. In fact, it is quite possibly superhuman for a person of her size and weight.

Her physical speed and reflexes are also oddly high. They’re clearly not superhuman, but these levels are normally found in persons with a far more intensive, lengthier training and conditioning regimen.

She is an excellent hand-to-hand combatant and athlete, as well as a gifted physician.

Doctor Midnight has in the past used some of Doctor Mid-Nite’s “blackout bombs”. These release clouds of pitch black gas in which she can see clearly – but in which adversaries with normal vision cannot.

She has also been known to cooperate with Obsidian (Todd Rice), who can extend his form to become a darkness field. 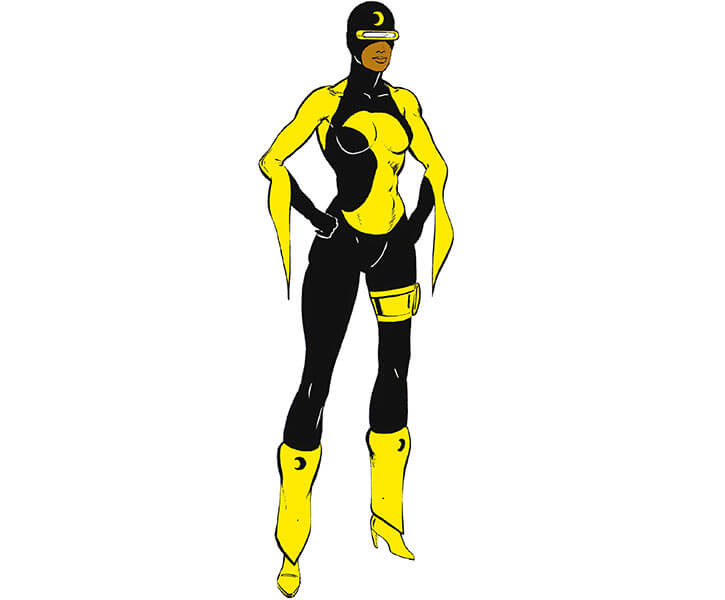 Beth Chapel is the daughter of a minister. She grew up with her four rowdy brothers in Orangeburg, South Carolina.

She studied medicine and became the protegée of the noted physician Dr. Charles McNider. McNider believed that Chapel had the potential to become the most brilliant surgeon he had ever known.

McNider was blind in normal light, but he had the superhuman ability to see clearly in darkness. In his secret identity as JSA member Doctor Mid-Nite, he wore goggles with infrared lenses. These enabled him to see in normal light as well.

Years before he admitted his secret to her, Chapel realized that her mentor was really the renowned costumed super-hero.

Chapel became an intern at Sunset Medical Center in Los Angeles. It was at this hospital, very early in her internship, that she first met members of the super-hero team Infinity, Inc..

During the Crisis on Infinite Earths, an earthquake struck L.A.. This caused a fire at Sunset Medical Center. While saving a patient, Chapel was blinded by the explosion of an oxygen tank. 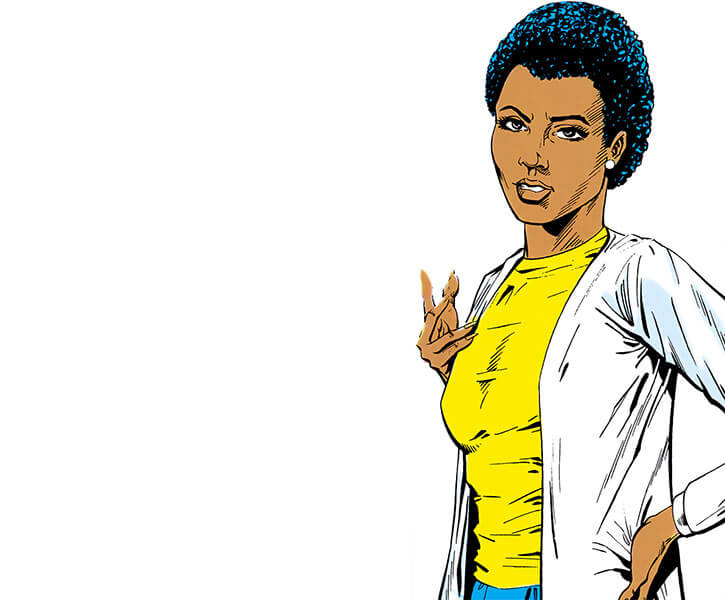 Land of the blind

McNider directed a surgical team in operating on the injured Chapel for five hours. He used an ocular implant from her pineal gland  . As a result of this unusual procedure, Chapel’s vision was partially restored.

Chapel discovered her ability to see in darkness when she aided Hourman (Rick Tyler) in battling some of the Anti-Monitor’s Shadow Demons.

Chapel adopted a costume (designed by Hourman) and, in honor of her mentor, took the name Doctor Midnight. She and Mid-Nite later told each other that they both knew the other’s secret identity.

However, after an initial period of activity, Chapel came to realise she could not cram both her heroic career and her medical career into her schedule.

Doctor Midnight joined Infinity, Inc.. Her main condition was that she would only be called upon to act in her costumed identity when absolutely necessary, so she could devote her time to patients.

The other condition was that she become the team’s official physician.

Seconds after she was accepted, she grounded her friend Hourman. Chapel argued that the Miraclo pills were far too much of a health risk for Rick. Signs of addiction were already apparent. This seemingly was her plan with Skyman (Sylvester Pemberton) all along.

During her part-time career with Infinity Inc., the JSA (including Doctor Mid-Nite) was summoned to serve in a seemingly eternal battle against the forces of annihilation at Ragnarok. Most JSA members thus disappeared.

After a period of mourning her mentor, Beth continued her medical career and her occasional costumed exploits.

Chapel eventually managed to produce a new Miraclo formula. It was based on Rex Tyler and Charles McNider’s research on a way to make Miraclo safe for Rick Tyler.

Her Miraclo allowed Rick to become Hourman again (though it only worked for him and, potentially, his father). She also changed the packaging so it would now be delivered as hourglass-shaped skin patches.

After the Calgary incident, she further counselled and helped Hourman II cope with his apparent murder of the villain the Wizard (W.A. Zard). 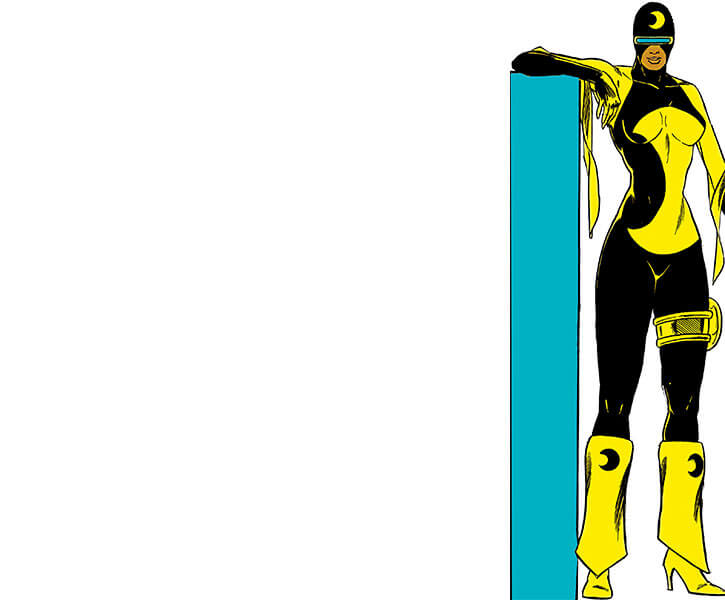 After Infinity is gone

After Infinity, Inc. disbanded in the wake of Skyman’s death, Dr. Chapel seemingly concentrated on her medical career. She became a surgeon at the LAGH  .

In 1993, she was one of the minor heroes contacted by Amanda Waller for a super-powered strike on the small island nation of Parador. Parador had been taken over by Eclipso, with atrocious consequences.

It is possible that it was Yolanda Montez (Wildcat II), also a part of the operation, who referred her in.

Dr. Midnight was seeming killed by Eclipso whilst attempting to save Wildcat II, who had been fatally wounded by the monster.

However, several superhumans killed during that operation have since come back. Usually without much of an explanation, since this story arc was poorly regarded and oft ignored. 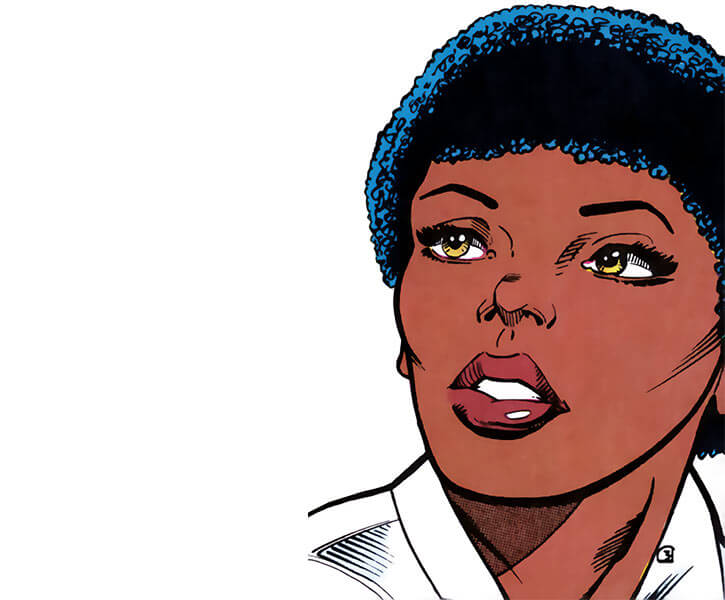 Dr. Chapel is a sharp one. Given her youth this tends to make her brash and cocky. She often wants to be in charge if she does not have reasons to believe in the competence of the current leaders.

She has a tendency toward sarcasm, but not in a particularly aggressive way. Though she will occasionally give people a good-natured ribbing. This may stem from the social pressure she gets for being a young, Black, female doctor in the 1980s.

She’s particularly frank, but generally not in an insulting way, and has a good sense of humour.

After the explosion, Chapel had a crisis of faith. But she returned to the fold after recovering a form of vision.

Adult in the room

Chapel’s job as a doctor is more important to her than her career as Dr. Midnight. Thus, she prefers to spend time at the hospital rather than in costume.

Likewise she is very serious, even authoritarian, about health risks for people around her.

She’s by far the most responsible, collected and serious member of Infinity, Inc.. Even compared to the significantly older Skyman.

“Sure, why not ? Even we lowly interns have to eat sometimes, rumors to the contrary.”

“What’re the rest of you whitecoats waiting around for — last rites ? Start emergency evacuation procedures — now !”

“Accept the fear, and you’ll begin to resolve your guilt feeling toward your father. That’s what’s keeping you from becoming Hourman again — not the fact that you killed a murderous madman like the Wizard in self-defense.”

“Dr. Tang, reinsert the breathing tube ! We’re going to save this man !”

Scientist can only be used for medical and pharmacological matters, and is Contingent Upon her Medicine Skill.

Vehicles wasn’t demonstrated, but she lives in L.A..

Her Mentals and Mysticals retain the high Mayfair values. These never were demonstrated as being that high, but there’s too little material to tell either way.