Doctor Poison is a Golden Age  enemy of Wonder Woman. She was an evil scientist from Imperial Japan. Unlike the vast majority of WW’s foes, she appeared several times – which makes her notable by itself.

This profile is a description of her appearances published from 1942 to 1948. We know that Doctor Poison also existed in the 1940s of the post-Crisis on Infinite Earths universe, but there’s precious little data about that.

Dr. Poison is an adept spy and spy-mistress. She’s also a genius when it comes to chemistry and biochemistry.

Doctor Poison (Princess Maru) appears to have been the director of Axis research into drugs and poison. She was seemingly both the chief of the poison division of the Nazis, and the head scientific researcher of Imperial Japan.

Thus, it is possible that she was involved in some Imperial weird science projects such as Captain Nippon.

In 1942, Gestapo agents passing for Army Intelligence men kidnapped Steve Trevor and Diana Prince, and took them to Dr. Poison’s secret base. Thankfully, Nurse Prince switched the truth serum for a saline solution, then escaped. Dr. Poison nevertheless had her agents spike the water main to an Army camp with her Reverso drug as planned.

The Army recruits started interpreting every order backward (walking backward when ordered to march forward, stripping to their underwear when ordered to dress the ranks, charging when ordered to halt, etc.). Thousands of soldiers had to be imprisoned, with the Army having no idea why they were all apparently insane.

Meanwhile, the Amazing Amazon discovered that the Nazi spies implementing Poison’s plan were disguised as American soldiers, operating a small fake military base on US soil. Assembling a hundred girls from the Holiday College as a marching band and equipping them with manacles, Wonder Woman marched them on the spies’ base.

That was the first time Etta Candy and the Holiday Girls, who would become Wonder Woman’s frequent helpers, were assembled.

The disconcerted Nazi spies couldn’t open fire on a bunch of girl musicians who barged in and insisted on organised a dance for the “Army boys” in the base. Wonder Woman freed Trevor, then gave the signal for each Holiday girl to manacle her dancing partner. The heroine revealed Doctor Poison to be a Japanese princess, who was captured by Etta Candy.

Doctor Poison somehow escaped. In late 1943 she was running a spy operation in China, aiming to ground all American aircrafts there. Passing herself for a Chinese dancer, Dr. Poison again kidnapped Trevor – who recognised her a tad too late.

Her cover among the dancing girls troupe then allowed Maru to mess up all engines at the US air base with her special gas. The US military didn’t even realise that their air power had been crippled. 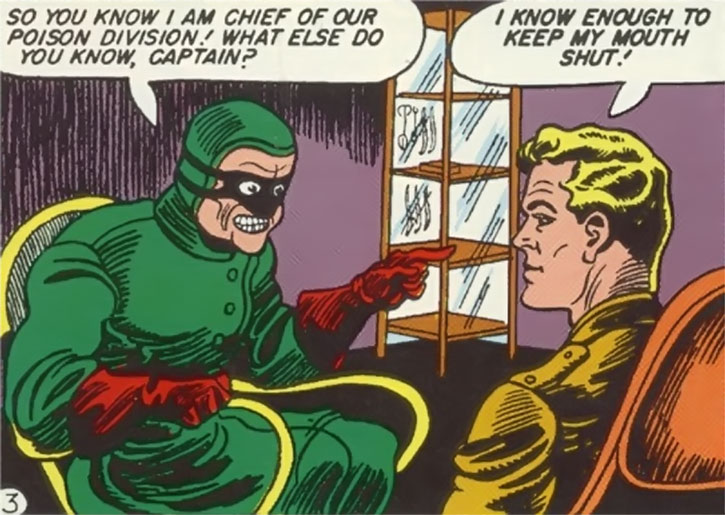 Wonder Woman rescued Trevor, and foiled the Japanese bombing raid before they could exploit their surprise air superiority. She then captured Doctor Poison so that the Lasso of Truth would make her explain how to combat her special gas and reactivate the planes. Ammonium solution in the carburetor, if you must know.

Dr. Poison was then imprisoned, presumably on Transformation Island this time – since escaping from an American military prison had been easy for her. Whether she ever escaped is unrevealed, but in 1948 she was detained there.

Eviless triggered a mass breakout at Transformation Island, freeing Doctor Poison and other hardened criminals. Eviless organised them as the first Villainy, Inc..

However, Dr. Poison was recaptured on Paradise Island. And that was, as far as I can tell, her last chronicled pre-Crisis adventure.

Only one post-Crisis appearance is known of. It took place in March, 1948. Dr. Poison was a member of the post-Crisis version of Villainy Incorporated I, led by Queen Clea and also including Hypnotic Woman, Zara and Cheetah (Priscilla Rich). They attempted to steal submarines from the Fort Church naval base to conquer Atlantis, but were stopped by Wonder Woman (Queen Hippolyta).

Princess Maru had at least one child later in her life. According to her grand-daughter, the second Doctor Poison, Maru died whilst experimenting on a new Reverso formula, which made people age backward at an accelerated rate.

Some of the compound accidentally touched Dr. Poison’s skin. Within seconds, Princess Maru was too young to remember about the antidote, and she soon became a baby and then nothing.

Dr. Poison was entirely covered with a heavy smock-like robe, a hood, a lifelike mask all over her face (which presumably also muffled her voice), and a large domino mask over the mask. An observant person such as Wonder Woman could note delicate, feminine hands, but most everybody assumed that Dr. Poison was a man.

In her second appearance she just appeared as Princess Maru, wearing a light summer dress. She also wore a light dress under the Dr. Poison smock.

Maru is young, fit and pretty – not at all the type of person American spies expected.

Unlike most Japanese villains in 1940s US comics, she wasn’t a all-out racist caricature (like, say, Captain Nippon). She’s still a Canny And Mysterious Oriental, but by 1940s standard it’s tame.

Dr. Poison: “This syringe contains scopolamine and morphine in suitable proportions. You know what that is ?”
Steve Trevor: “Truth serum ! You devil !”

“There is the point where you will tap the water main which supplies the Army camp. You will empty 12 cylinders of Reverso into this pipe slowly – one gallon per hour. In 24 hours the whole camp will be in confusion !”

(Upon being unmasked) “I am the Princess Maru ! My genius shall destroy America !”

(Post-Crisis) “Inhale the toxin, Wonder Woman ! Feel your perceptions shift as your brain turns to ash — and you die !”

Clea, to Wonder Woman: “Foolish woman. We are more than just petty criminals !”
Dr. Poison: “We are queens and princesses ! Scientists and thieves ! Magicians and rogues !”

Connections:
As derived from Credentials.

In her 1948 post-Crisis appearance, she wears roughly the same costume she had in 1948 pre-Crisis. The smock and domino mask are there, but she no longer has a face mask and she now wears heavy gloves. She also has a number of cartridges around her wrist that can discharge a number of gasses. It looks a bit like the classic Widow’s Bite of the Black Widow.

I would assume that she can produce a number of effects at around 10 APs (Knockout Gas, Acid, Poison Touch, Mind Blast… and an Omni-Chemical) but with a Range of 0 APs and relying on a specialised Accuracy Skill at about 06. 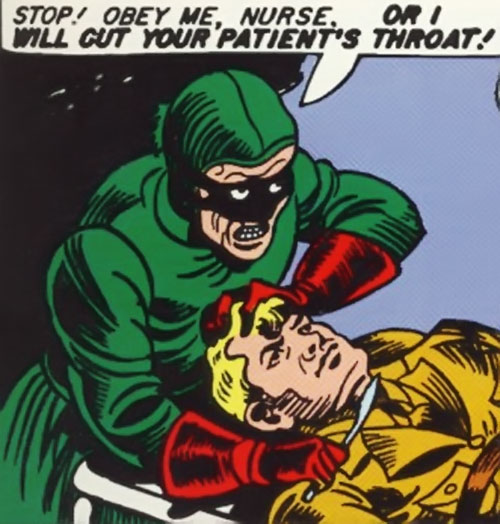 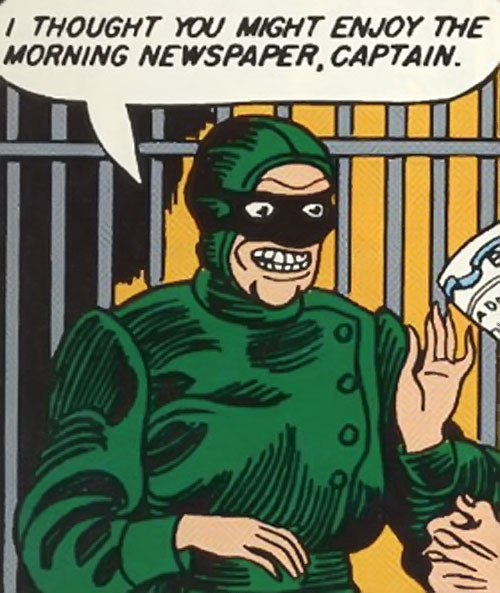 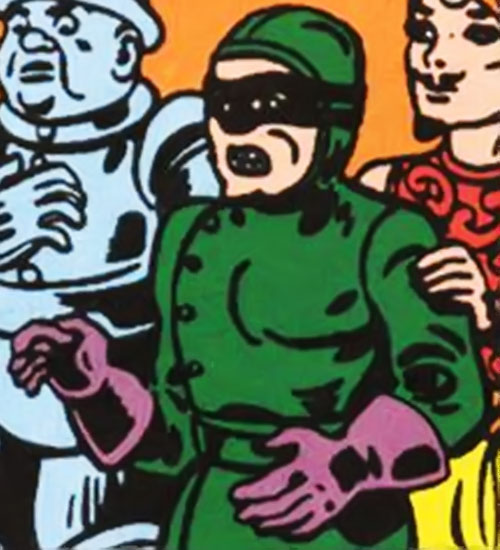 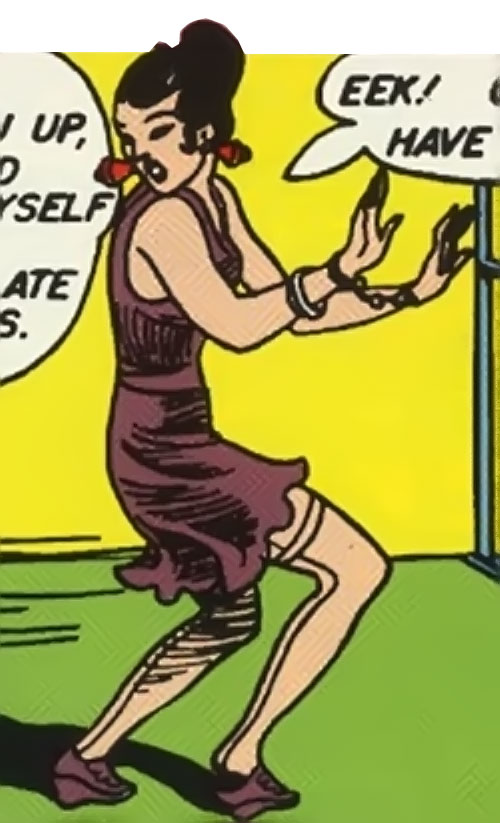 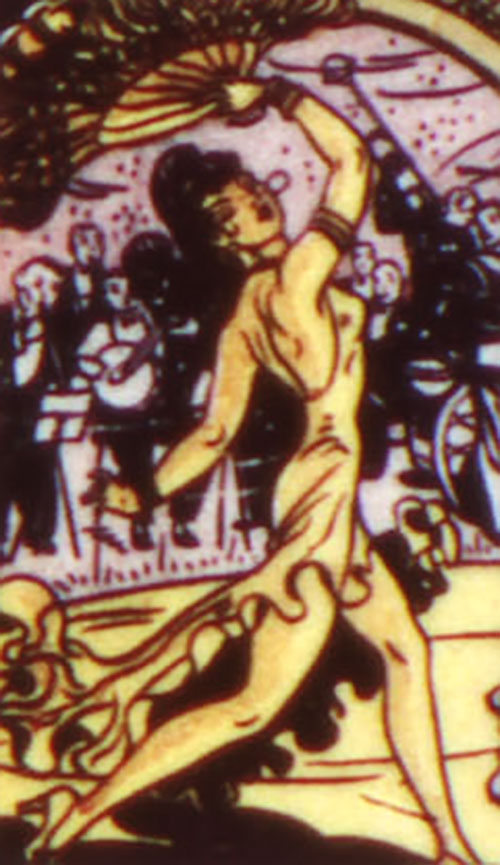 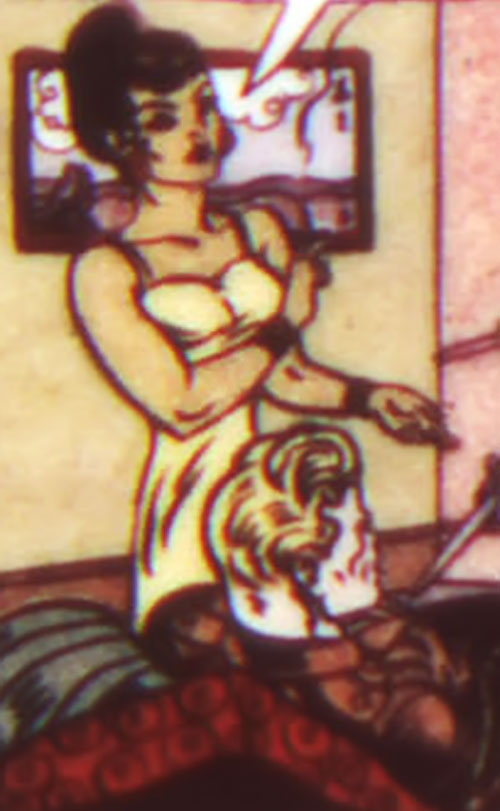