“That little toy of yours won’t work on me, Sandman ! Even your Whistle can’t reach my cerebro-sonic wavelength ! Besides… now it’s my turn to do something tricky ! You were a fool to leave little Jed in the Dream Room, Sandman !”

Doctor Spider is a DC Comics bad guy who fought Jack Kirby’s Sandman. He appeared but twice, in 1975/76.

Doctor Spider is a technological genius and the leader of his own small criminal organisation.

His men move around in advanced submarines and work in high-tech secret bases. Furthermore, Spider invented an incredible technology that could not just read dreams (like Dr. Sanford’s invention) but depict them in vivid real-time video (the “somnambo-screen”). More importantly, it could import creatures from dreams and nightmares right into the real world.

Doctor Spider was disfigured and severely handicapped. He lacked arms, legs and possibly eyes. He built himself prosthetics to meliorate this, including a wheeled base to move around and the eight robot arms that presumably inspired his villain name.

These prosthetics were somewhat crude given his overall technological level. For instance his arms ended in mere pincers rather than hands. This may be a hint that his condition was from birth and deprived him of the means to command more sophisticated appendages.

Perhaps he missed the nerve endings, cerebral areas or somesuch due to a genetic disorder.

During a field mission, Doctor Spider’s men detected that the nightmares-prone orphan Jed Paulsen registered on the twelfth level of their “angst-meter”. They kidnapped him to bring him to their boss.

Spider was looking for a nightmares-prone person to test two inventions of his. One could transmit images of a dream as it occurred. After Paulsen was given some drugs and put asleep, the technologist could thus confirm on his “somnambo-screen” that his nightmares were full of incredible monsters.

This is where the second invention came in. It was a technology that could bring nightmare monsters to rampage in the real world. After feeding an underling to one such monster, Doctor Spider unleashed gigantic, surreal nightmare monsters on the US.

These surreal kaiju  ignored the military and the police’s efforts. They killed two entire infantry units. Thankfully the Sandman (Dr. Garrett Sanford) came in from the ’dream dimension’. Though the police wanted to expel him, he blew his Hypnosonic Whistle and the monsters vanished.

However, Spider had prepared for this eventuality. An agent of this, disguised as a fireman, shot Sandman unconscious. He then abducted the super-hero before anybody could react. The guardian of dreams was strapped to a table and hooked up to one of Doctor Spider’s machine. This device apparently would provide the genius with limitless power as he drew from the Sandman’s dreams.

And it would have worked too, if not for these meddling nightmares. Unknown to even Sandman, his two chaotic allies Glob and Brute could reach Earth on their own. They sneaked in and loosened their friend’s bonds, allowing him to free himself as soon as he woke up.

The Sandman defeated Dr. Spider’s henchmen, then the nightmare monsters summoned from Jed Paulsen’s dream. This gave time for Doctor Spider to flee in a submarine… which inexplicably exploded, presumably as a diversion.

The plot to destroy Washington, D.C.

Doctor Spider returned some months later, with an even greater understanding of the Sandman. Based on this knowledge he built a Jed Paulsen android, took it to the Dream Strean and had it pretend to drown. He then artificially projected a nightmare about drowning in Paulsen’s mind.

Detecting the scene but no nightmare per se, Sanford assumed that Paulsen was being subjected to a dream by some outside force. Thus, he came to the rescue – only to have the android explode and knock him unconscious.

Sandman was taken aboard Doctor Spider’s nearby submarine. Spider took his Hypnosonic Whistle. He then sent an android double of the Sandman to lure in and capture Brute and Glob. However, Brute realised something wasn’t right and escaped capture. The submarine then returned to Earth.

Doctor Spider escaped. Dr. Sanford refused to kill him as he fled – despite Brute and Glob’s urgings.

Years later, the Sandman (Garrett Sanford) would meet Wonder Woman and then the JLA. This indicated that his previous adventures — and thus Doctor Spider — took place on Earth-1 of the pre-Crisis on Infinite Earths DC Universe.

However in 1989 the Jed Paulsen adventures were retconned  into having been dreams of a little boy named Jed Walker. It is thus likely that Doctor Spider was but a child’s nightmare. He certainly feels like one.

*However*, at least one character (General Electric) appeared both in the Jed Paulsen dreams and on Earth-1. So it is possible that Doctor Spider existed on Earth-1.

Cruel, evil villain. He exploits the nightmare of children and kills his henchmen because they were vaguely annoying.

He’s very confident in his great intelligence and quick to dismiss anyone with a more ordinary intellect.

“That is indeed a triumph ! What matter if tonight’s little effort ended in failure ? With the dream power of the Sandman at my disposal, I will be invincible ! The entire world will be my plaything !”

“Take him alive if you can ! I want him back in the Dream Room !”

“Good, good ! When Brute tries to follow we’ll get him, too ! Now dive at 700 feet at once and set a course for secret island fortress number 114 !”

Bonuses and Limitations:
All Powers are Self Only and only protects against mental effects (Control, Hypnosis, Sleep, Mind blast, Telepathy attacks, Magic blast, etc.).

Drawbacks:
Strange Appearance, Minor Rage, CPR (the Doctor is quadriplegic, though his Equipment partially compensates for his condition) and possibly a CPR (he may have a severe visual impairment).

Doctor Spider is served by a retinue of men wearing hooded robes, with a large digit (from 2 to 9 – presumably Spider is 1) on the chest.

They use the Professional Henchperson stats from the Stock Criminals and Thugs article on writeups.org, travel via submarine, are armed with bolt pistols as above, and usually serve as lab/tech assistants – field missions seem rare. When in the field they have 1970s walkie-talkies and perhaps a small sensor useful for their mission.

By the Doctor’s second appearance, they wear sinister blue masks under their hood.

Dr. Spider demands utter, immediate, unconditional obedience from his men. He’ll probably replace them by robots if those get cheap enough to make or buy.

Dr. Spider also had a large security robot, but it was immediately slagged by the Sandman’s Whistle. 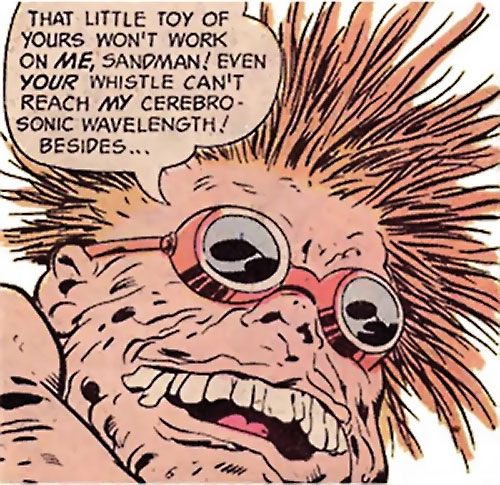 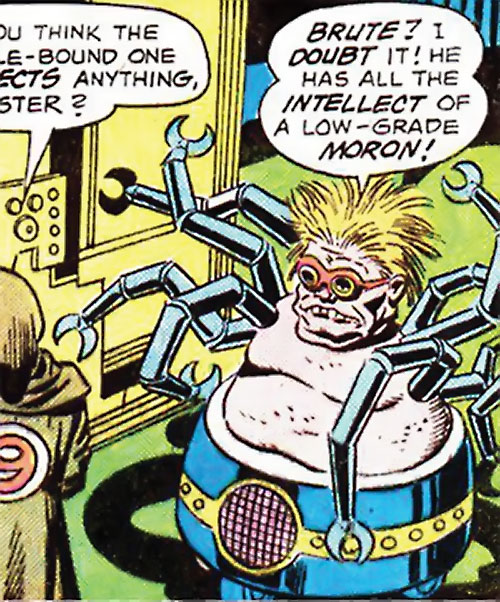 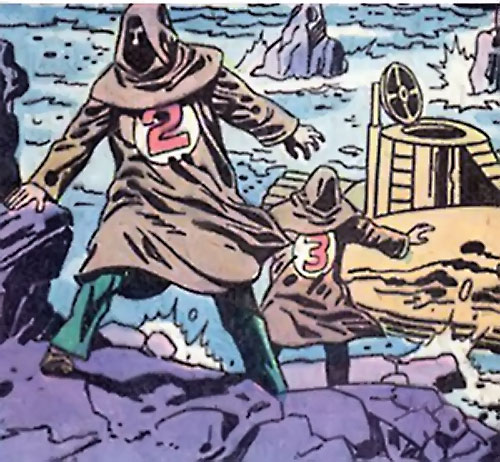 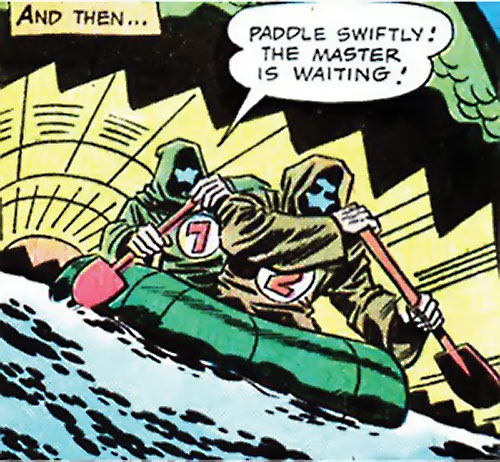 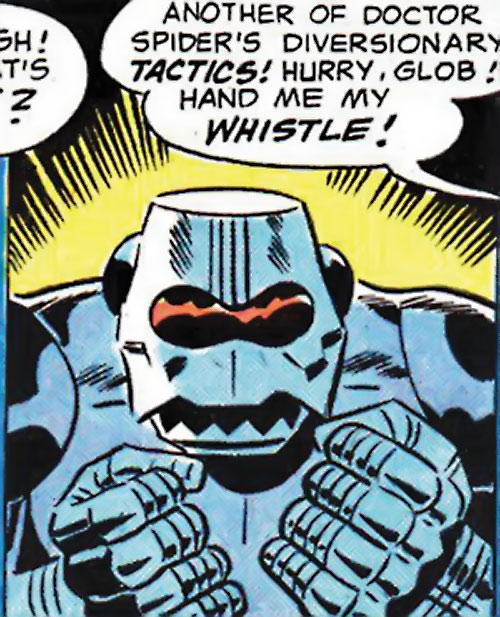