Doctor Strange is an early Marvel Comics character, appearing in 1963.

He’s one of Stan Lee  and Steve Dikto ‘s most memorable creations. Of special notes are Ditko’s surreal visuals for magic dimensions , and Lee’s invocations for the spells that Strange casts.

Dr. Strange is the premier magician in the Marvel Universe. As the Sorcerer Supreme, he secretly protects everyone from innumerable mystical threats.

Strange has been in almost continuous publication since his beginnings, and has been a major presence in many major crises and cosmic events.

The following is a gisted profile, presenting an overview of the character without focusing on a particular era or aspect.

Put simply, Dr. Strange is the Sorcerer Supreme, *the* best and most powerful mortal sorcerer in the Earth Dimension. Using a combination of mystical artifacts, sorcerous energy borrowed from benevolent mystical beings, and his own inborn power and discipline, he is able to manipulate Reality itself to suit his purposes.

While capable of casting spells of vast power, he prefers to use less-stressful ritual magic for high-level spell casting when possible. This is particularly important given how quickly his foes would take advantage of any weaknesses on Strange’s part. 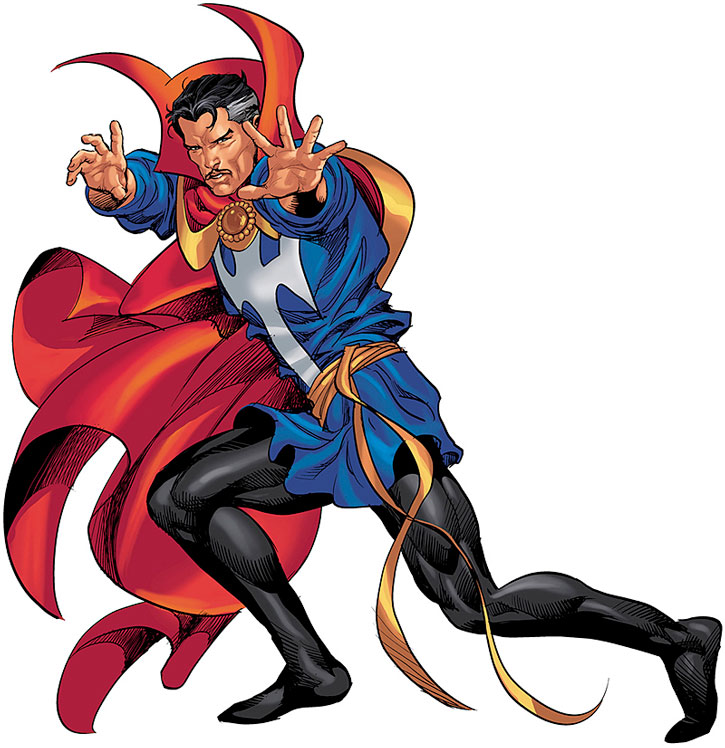 Strange has also become adept at various mental abilities, including hypnosis and telepathy. He can communicate with any mind on Earth and can maintain contact with up to a dozen minds at once.

Doctor Strange is an expert in all matters occult, a mentor to lesser mystics, and though he is no longer a practicing physician, he still has a vast knowledge of medicine. He is also a fair martial artist, trained regularly by his aide Wong.

Stephen Strange was a brilliant but heartless surgeon, a money-hungry SOB. However, his career was ruined by nerve damage incurred in an auto accident. He squandered his personal fortune and degenerated into a hopeless derelict, searching the world for a cure to his condition.

He eventually found himself in Tibet at the home of The Ancient One, Earth’s greatest sorcerer, from whom he sought a magical cure. A threat to the Ancient One’s life from his traitorous pupil, the evil sorcerer Baron Mordo, rekindled the long-lost light in Strange’s soul. He accepted an offer to become the wizard’s new student.

He eventually took his Master’s place as the primary mystic guardian of our dimension. He became the Earth dimension’s Sorcerer Supreme, despite many trials and tribulations. 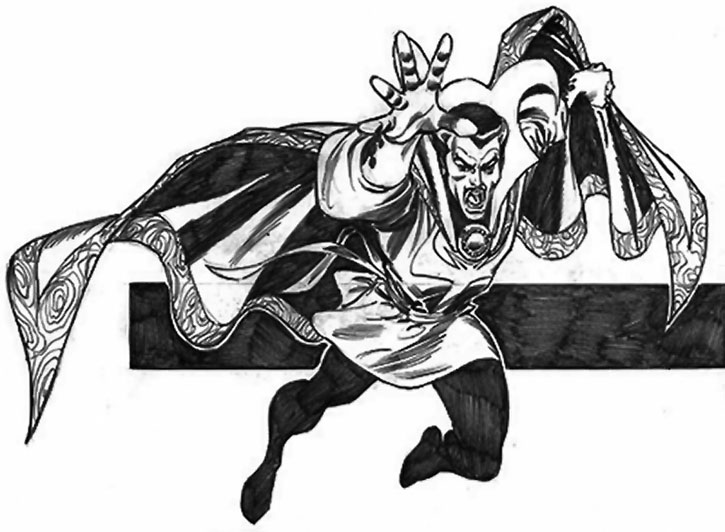 Dr. Strange lost most of his mystic power when he refused to fight on the behalf of the Vishanti in the “War of the Seven Spheres”, which was anticipated to last several thousand years. Strange thus renounced all of the abilities derived from invoking those entities.

He was left only with those abilities related to mystic energies he could manipulate directly. The changes Dr. Strange underwent during this time are too extensive to summarize here. However, he recently decided to enlist in the War of the Seven Spheres and returned afterward restored to full power.

Dr. Strange is a tall, handsome and somewhat thin man who appears to be in his early 40s. He has short black hair, combed into a widow’s peak, with white streaks just above the temples. He has an angular face with deep-set eyes, and what is possibly *the* coolest mustache in the entire Marvel Universe => 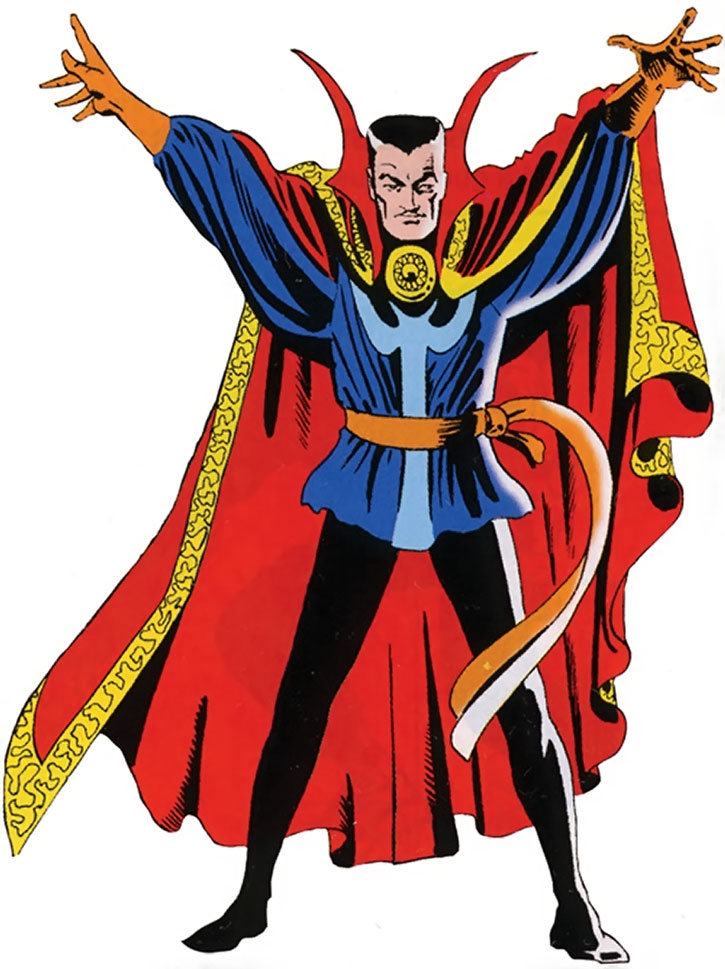 His mystic “uniform” consists of black tights, a bright blue tunic with a gold sash and a lighter blue trident symbol (or a black demonic bat, depending on the artist) on his chest, and gold gloves with a pattern of black leopard spots.

He generally wears his Cloak of Levitation, a red cape with a high-backed collar and yellow trim on the edges. He also carries the Eye of Agamotto, a circular amulet with a gold-filigree fringe and a large golden eye in the middle.

Dr. Strange’s character is defined by 2 outstanding factors: his extreme dedication to his task as Earth’s foremost mystic guardian, and his need to keep his secrets safe.

He more or less invented the unwritten “Comic-Book Magician’s Code” of not telling your allies any more than they need to know. An encounter with Doc should leave his allies with a lot of questions that they’re a little afraid to ask. 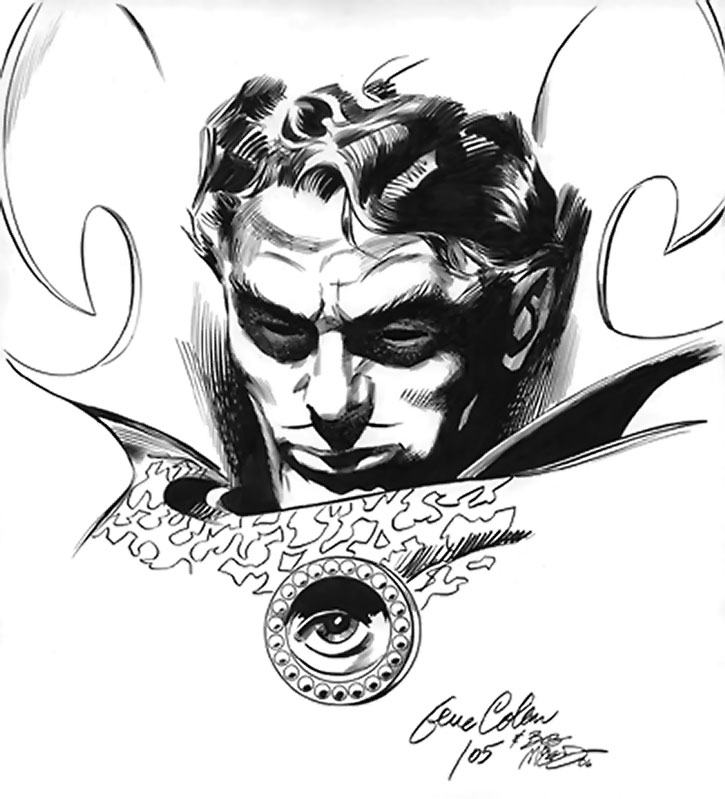 That said, Doc is also a very pleasant, polite and compassionate man. He makes friends and allies easily, and is always there when they need him.

Dr. Strange’s adaptability and ingenuity are also noteworthy. He has defeated vastly superior foes by means of his resolve and resourcefulness on many occasions.

Dr. Strange still troubled by the selfish, petty behavior he exhibited as a surgeon. He tries to avoid reminders of that time in his life.

By the Hoary Hosts of Hoggoth ! I’m struck with my own power ! It can’t be Umar’s doing — she was pressed to her limit, and beyond ! That means — a confederate, some accursed anti-psychic toady lying in wait for my more potent thrust !”

In a DC/Marvel-combined campaign I was part of a few years back Doc, the Ancient One and some of their allies were part of an ancient order dedicated to protecting the Earth Dimension. They did this by maintaining a perfect balance between the Lords of Order and Chaos, foiling both their plans to gain the upper hand.

Note:
Authority Figure and Arch-Enemy have been modified; see New Rules for details. 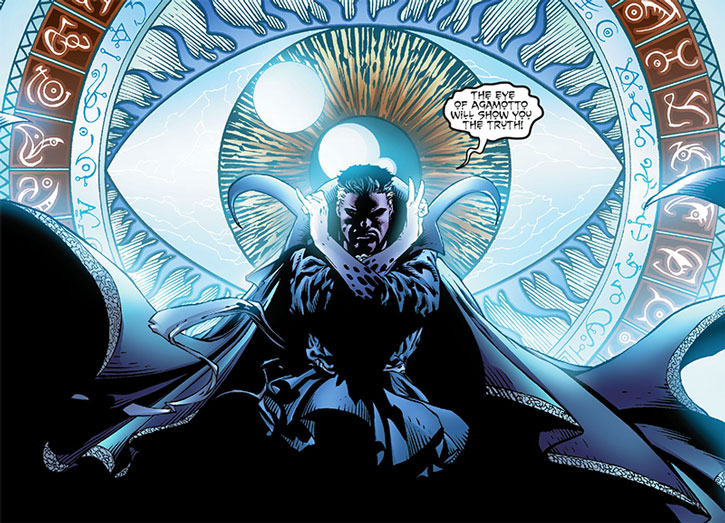 At the start of his adventuring career, Dr Strange suffered Guilt over his insensitive behavior during his years as a surgeon, and only had Magic Rank (Master), meaning he did not have the benefits of being Sorcerer Supreme (see New Rules). He also had a High-level Connection to the Ancient One, his mentor and the Sorcerer Supreme of the Earth Dimension at that time.

This lasted until the Ancient One ascended to the status of a mystic entity, at which point he lost his Guilt, was raised to the Magic Rank of Sorcerer Supreme, and his Connection to the Ancient One turned into a High-level Mystic Entity Connection.

The following two Drawbacks are not new, but have been re-written for better playability.

The Arch-Enemy is the hero’s primary nemesis. They frequently oppose one another, and the Arch-Enemy is often linked to the Hero’s origin in some significant way. When the Arch-Enemy appears in the campaign and what his goal is at any given time is up to the GM.

The hero doesn’t get HPs for fighting the Arch-Enemy directly, as it is assumed that he received them “in advance” for taking the Drawback, but still receives the standard HP awards for the adventure as a whole.

For example, if Dr. Strange and several other mages went through a scenario where the group battled Baron Mordo, Dr. Strange would not receive the HPs for defeating a powerful foe, but he would still receive the HPs for foiling his plans and successfully completing the adventure. The Arch-Enemy Drawback should also be considered when awarding HPs for role-playing during the session.

For example, an adventure with an Area of Consequence: Worldwide (A super-villain threatens to destroy the Earth) would relate to a King’s responsibility to care for his people (unless he has a plan to relocate his nation to another planet/dimension!)

An adventure with an Area of Consequence: City/Local (A super-villain threatens to poison the water supply of Empire City) would not relate to the responsibilities of another city’s self-appointed guardian. (Vinnie, JD) 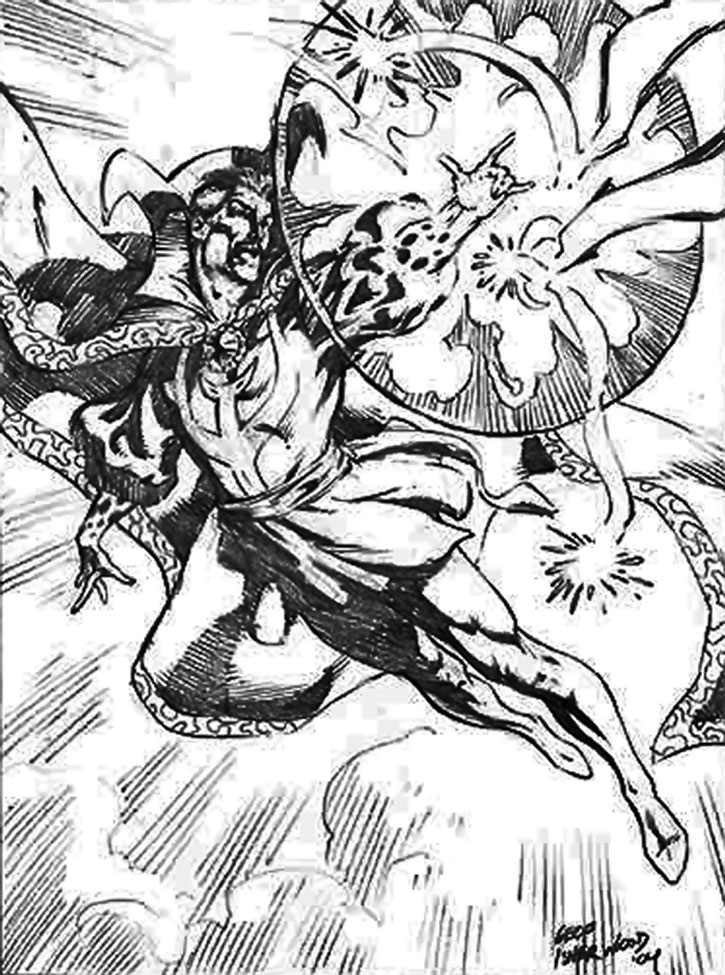 For more information on the following new rules, see Chapters 3 and 4 of the Marvel Universe Magic Sourcebook.

Additionally, characters with this Scholar can easily come up with new rituals “on the fly” during adventures. This enables such characters to buy rituals for various attacking powers (with low casting time and no components needed, but still paying the HPs for it) in the middle of combat.

When creating a new ritual, the character has a +2CS higher Ritual Casting skill. The Spellcraft bonus only applies to ritual creation — casting rolls does not benefit from Spellcraft.

Dr. Strange has Connections to the following mystic entities: 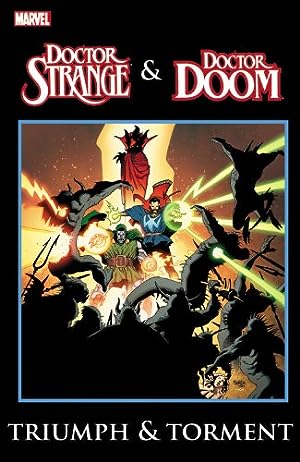 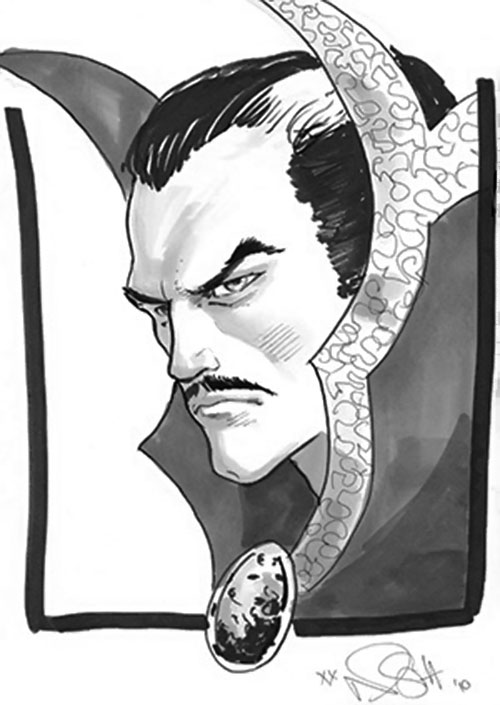 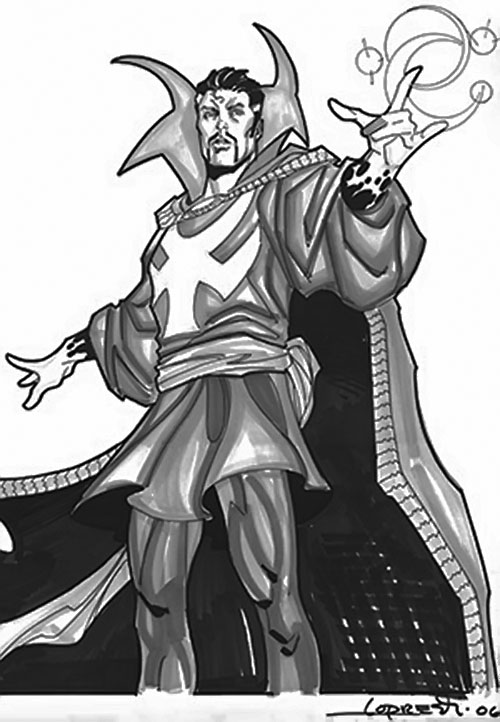 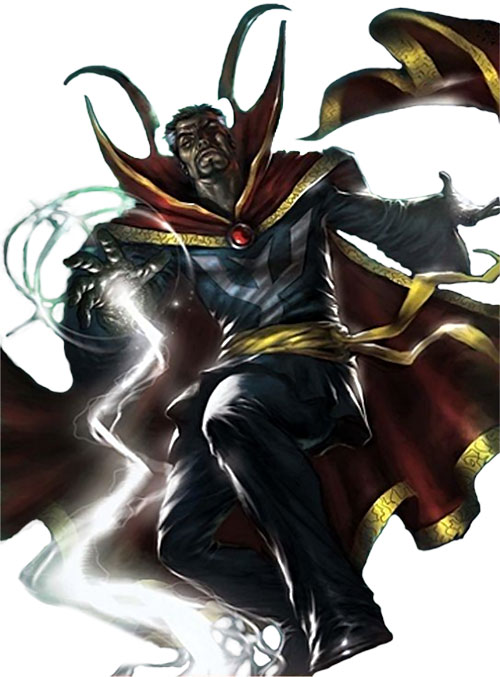 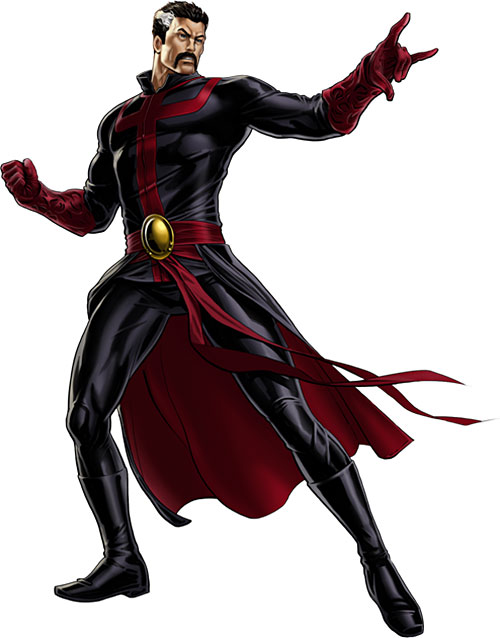 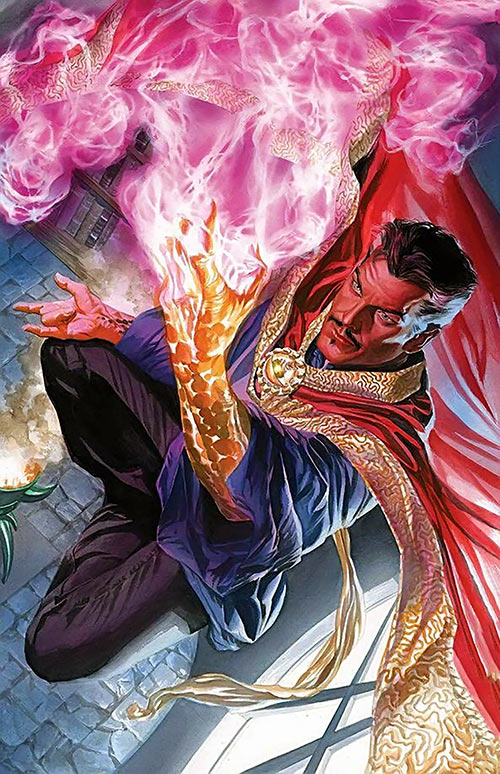