Witch Hunt is not covered yet.

In-game the dog can be named anything the player wants. But he’s usually called “Dog” — his placeholder name — when discussing among players.

Dog is a large, strong mabari warhound. As such he’s an enormous mastiff-like canine, trained to charge in and kill when ordered.

With their sheer mass, ferocity and killing instincts, mabaris are a deadly weapon. They are often deployed as the first wave of attack by Human troops in the kingdom of Ferelden, charging in front of their masters to break the enemy line right after the archery volley(s) have been fired. 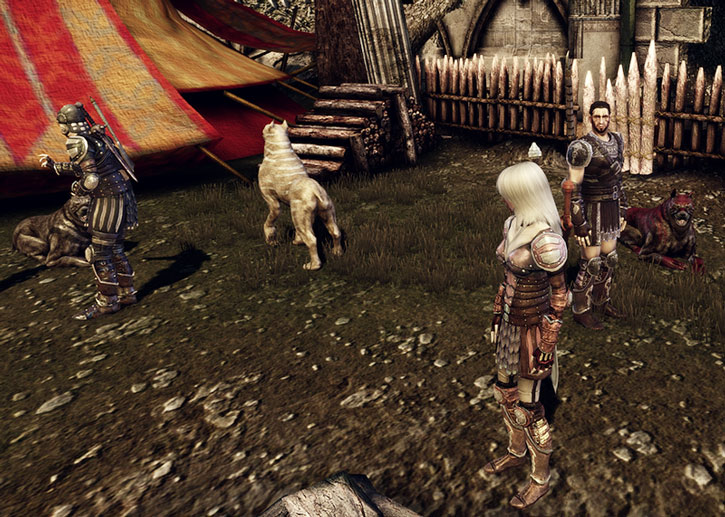 Ash Warriors and their mabaris at a military camp.

Mabaris’ level of intelligence is unclear. They can obey a wide range of complex orders. They can usually understand words they have not been taught based on tone of voice and body language. They are capable partners for their Human, unerringly loyal and surprisingly smart and helpful.

Mabari were reportedly bred by a mage to be more intelligent than other breeds.

Dog is very well-trained and recognises the Grey Warden as his pack leader. He’s a terrifying killer when ordered to or when defending his partner, but is otherwise completely harmless. He has a powerful olfactory sense and likes smelling up, digging up and bringing back interesting things to his partner – especially if he’s given treats.

If a large, dominant mabari male likes a place well enough (which usually involves a large tree with some clear space around it), he might mark it to declare it as his turf. A mabari is even more ferocious when fighting intruders on his turf.

A male who travels might have multiple turfs for a while, until the pheromone markings in older turfs fade. However they will spontaneously renew them if given the opportunity.

Having survived darkspawn blood poisoning, Dog may now be resilient to the Taint, though probably not to the degree Grey Wardens are. This is not clearly demonstrated, but would make sense since the Wardens continue having Dog attack darkspawns.

Dogs are an important part of Fereldan cultures. Many proto-Fereldan barbarians enjoyed a close relationship with dogs that went back to the domestication of wolves. Having a reliable canine companion has always been considered an important asset in the field.

Having a mabari partner, in particular, is prestigious. It’s like having a powerful car nowadays. 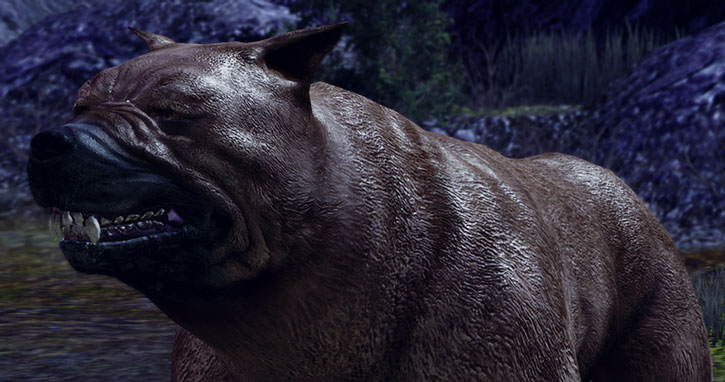 Dog was serving in the armies of Ferelden when they assembled at Ostagar to meet the emerging Fifth Blight. Dog was apparently serving with the Ash Warriors mercenaries. Ash warriors are a distinctive elite force made up of Humans who were taught to fight like Dwarven berserkers. Unlike Dwarves, the Ash Warriors of Ferelden routinely fight along with their faithful mabari.

Prior to the Battle of Ostagar, Fereldan fighters fought off three waves of darkspawns. They also clashed with various stragglers and marauders. During one of these fights, Dog was infected by the Taint as he swallowed darkspawn blood. He also lost his Human to the enemy.

Battles in the Korcari Wilds

The kennels master was despairing to see such a fine specimen go insane from the Taint. Yet, there was too little time to fully care for the dog. However, a young elf named Alamen Tabris came in. She had just come to Ostagar to undergo the Joining ritual and become a Grey Warden.

She helped muzzle the hound so he wouldn’t kill anyone due to Taint madness. She also brought back herbs for the kennels master to brew a purgative with. 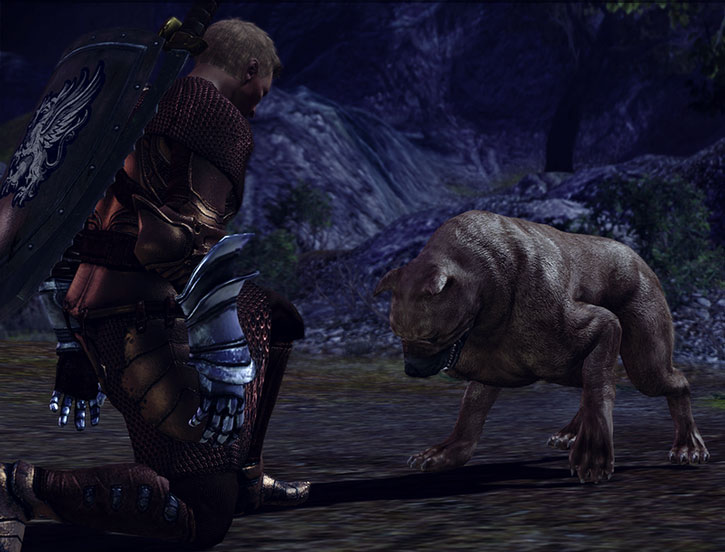 According to the kennels master, the dog understood that she had saved his life. He seemed to imprint – adopting Tabris as his pack leader. Through imprinting, mabari chose their partner – a bond that usually last until death. If either the hound or the person dies, it is reportedly seldom replaced since imprinting goes both ways.

Thus, the kennels master suggested that Tabris visit the kennels again after the battle. That would confirm whether the dog had imprinted on her.

The battle was lost, and Tabris never got to visit. Yet, the dog had indeed imprinted. Thus, in the wake of the Battle of Ostagar, Dog spontaneously tracked down Tabris in the wilderness. He became a de facto member of her unlikely team.

During the early stages of the war against the Fifth Blight, he was an important asset in combat, mauling the foes of the Grey Wardens with bloodcurdling ferocity.

In the playthrough chronicled in the writeups.org profiles, nobody bothers naming the dog until Leliana christens it Pompon. Tabris eventually stops fielding her dog, fearing that he will again get contaminated with the Taint.

Later on she convinces Morrigan to experiment with Wilds herbs and recreate the brew that saved Pompon back at Ostagar. The mabari then resumes helping save the world.

(In-game this corresponds to Dog being phased out as he becomes too weak compared to other characters. Then Leliana gets her Ranger specialisation and starts summoning a dire wolf, which for story purposes we’ll pretend is Dog.)

Dog is very, very slobbery and quite expressive.

In battle, the Ash Warriors and their mabari are painted with special motifs called kaddis. These temporary tattoos give off a strong scent. This allows the hounds to recognise their masters and their colleagues by scent even when everybody is covered with blood.

Some kaddis have minor magical properties, and there is a répertoire of named kaddis patterns. The enchantment of a magical kaddi will usually thematically match the pattern.

Dog easily comes to the chest of Ms. Tabris, and to the belly of most adult Humans. Though they resemble mastiff hounds, mabaris are larger than even a huge real world mastiff (and these can clock in at 100 kilos).

The body proportions of mabari are different from most Earth breed, with a shorter and broader body. In this respect, their build is almost more ursine than canine.

Left to his own device, he’ll quickly smell… beastly. Thus, Wynne started bathing him after everybody got fed up with the hound’s aroma.

A good, affectionate dog who likes being helpful. He also likes dog stuff such as gnawing on big bones, digging holes and playing fetch.

He eats a lot, but then given his sheer mass this is inevitable. Dog is very concerned about eating, and will sometimes bring food offerings (such as a half-devoured hare) to his friends.

Everybody likes Dog. He’s not just a formidable killing machine, he’s also a great pet, if a messy one.

He’s a smart one

Either Dog is extraordinarily good at non-verbal communication – or he can understand language. The way he barks, growls, whines, etc. only makes sense if he understands most of what he’s being told. 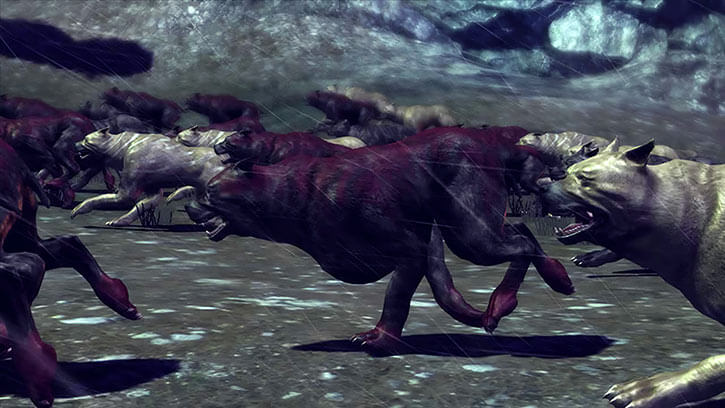 A massed mabari charge on the battlefield.

When Alistair told him a made-up story about certain tribesmen giving their slain enemies as food to their mabaris, the hound reacted with disgust at the thought of eating Human flesh. That was even though Alistair’s tone and gestures were upbeat.

Dog also protested when Leliana described him as “gluttonous”, but liked it when she corrected that to “lover of fine foods”.

Dog also likes trolling Morrigan. Their exchanges form comprehensible, complex conversations. As a shapechanger capable of turning into a wolf Morrigan might have greater understanding of mabari. In any case, Dog’s interactions with her are even more sophisticated than with other people.

Leliana: “But you can’t keep calling him ‘dog’, it is silly ! He needs a true name. And he looks like a Pompon to me.” (to the dog) “Would you like to be Pompon ?”
Dog: (ponders, then barks affirmatively).
Wynne (amused): “Civilisation is all about naming things.”
Alamen (grabs one of her weapons, gets up, taps the mabari on each shoulder with her sheathed blade): “You are now Ser Paw-paw, of Ostagar, by, uh, the authority of the Grey Wardens.”
Alistair: (salutes)
Morrigan: (scoffs in the distance)
Leliana: “No, ‘Pompon’.”
Alamen: “Pow-pow ?”
Leliana (sighs, scritches the dog): “Don’t worry Pompon, I’ll teach her.”

Drawbacks:
CIA toward Loyalty to Alamen Tabris, Misc.: Dog is a dog, of course. 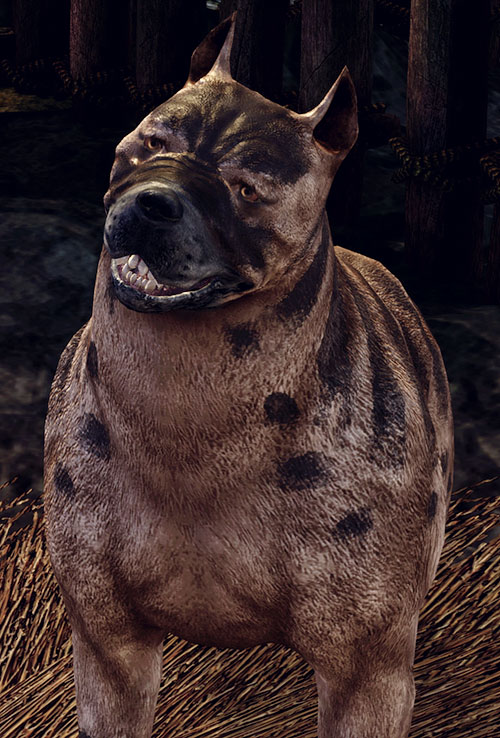 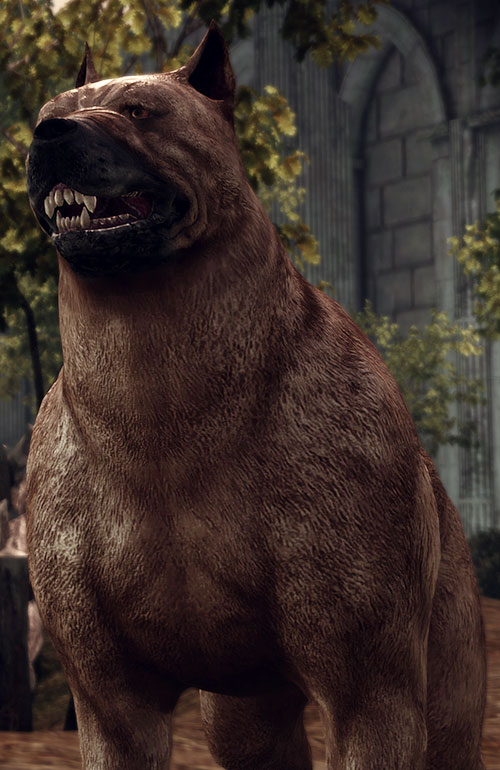 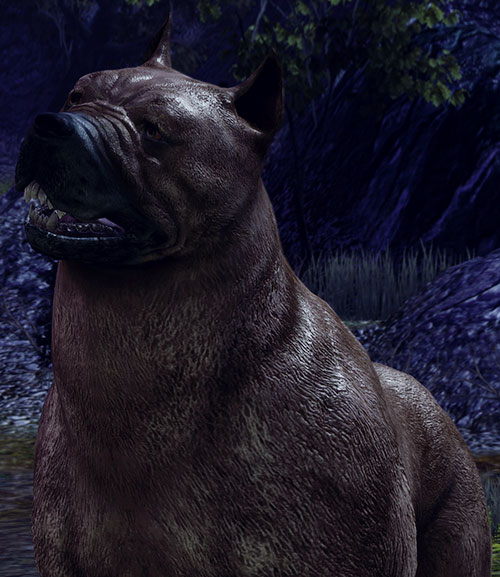