Dogg was changed into a dog during the Big Bang. But he retained his human intelligence and ability to speak.

Dogg is a Bang Baby. That is, a gang member who received superhuman powers in the wake of the Big Bang. The Big Bang was supposed to be a rumble between all of the major gangs of Paris Island to settle their turf wars, once and for all. The Dakota City Police Department learned of the impending showdown and developed a special tear gas that also contained a radioactive marker.

Their plan was to use the gas to break up the Big Bang and then trace the gang members down the next day by tracing the radioactive “tags.” Instead, most of those exposed to the tear gas died. The handful of surviving gang members that lived had all developed superhuman abilities.

One of the Bang Babies, Rolando Texador, took the name Tech-9 after his favorite type of pistol. He gathered his fellow survivors together with a proposal. Tech-9 wanted to form a new gang, the Blood Syndicate, to achieve substantive positive social change. One of his first recruits was his brother, Dogg.

Dogg looks like a typical golden retriever, except that his fur was dark brown.

Much like his namesake, Dogg is loyal to his friends and playful. He is also a little sarcastic.

Though not as charismatic as his brother, Dogg is well-liked and respected by his teammates.

“Damn. You always gotta remind folks who they’re talking to.”

Holocaust: “How about you, Scooby Doo ? We could use a mascot.”
Dogg: “Ruck roo.”

Dogg can be used individually, particularly in any animal-based campaign or adventure. His origin should altered to suit the circumstances and he could either be an altered human or an enhanced canine.

Advantages:
Area Knowledge (Paris Island), Expansive headquarters (The Factory, though the Blood Syndicate may have a new base of operations after its disbanding and subsequent reformation), Language (Spanish), Sharp Eye. 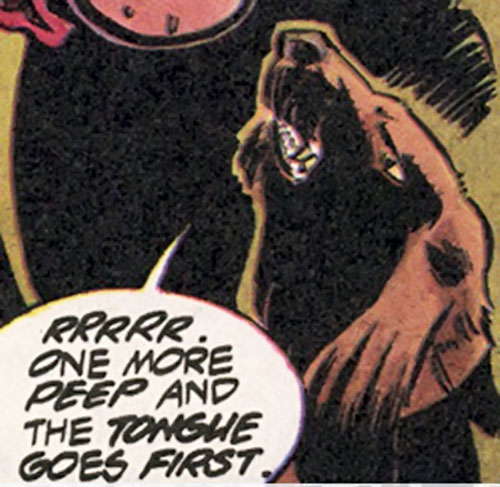