Domino’s mutant power is the uncanny ability for things to “just fall into place” for her. This can be anything from an enemy’s equipment failure to hitting just the right switch with a stray shot to shut down the overloading nuclear reactor.

Her power are less spectacular than Longshot’s, and will usually seem to be simple serendipity.

Many of her game stats’ high scores reflect her luck, as she’s more likely to succeed than she should at numerous tasks.

Domino is the daughter of one Beatrice, who had a number of offsprings as a part of a top secret US military project. Through artificial insemination of special genetic material, she was expected to give birth to mutant agents.

For 3 decades or more, however, the project didn’t achieve much success.

Only 2 children survived. The others died of natural causes or due to the rigour of testing. However the first, Domino, was catatonic and the second, Lazarus, had been frozen while an embryo as part of the protocol. Both were born with chalk-white skin, and both received a black patch around the eye at birth to identity them as mutant test subjects.

Beatrice, the womb for hire, started experiencing mental unrest. She was eventually diagnosed with dementia. She fled the facility to join a cult called the Armajesuits. Taking Domino with her, she left the catatonic child at the Church of the Sacred Hearth, in Chicago.

Beatrice would eventually become one of the leaders of the Armajesuits. Meanwhile, Domino got out of her catatonic state when her mutant powers awakened, but some time later fled from the church in terror over her own powers.

Domino’s life after she became a runaway is still largely undocumented. She has acted both as an agent of various organizations and governments, and as a freelance mercenary. She also worked as an agent for a fixer named Jonathan Shepherd.

In one of her earliest recorded exploits, Domino was assigned to guard the prodigy Milo Thurman. Terrorists were seeking to exploit his unique ability to predict world events – and shift the balance of power between governments – based on historical analysis. Thurman was confined to a secret, isolated, highly defended base, and essentially kept as a prisoner for security reasons. 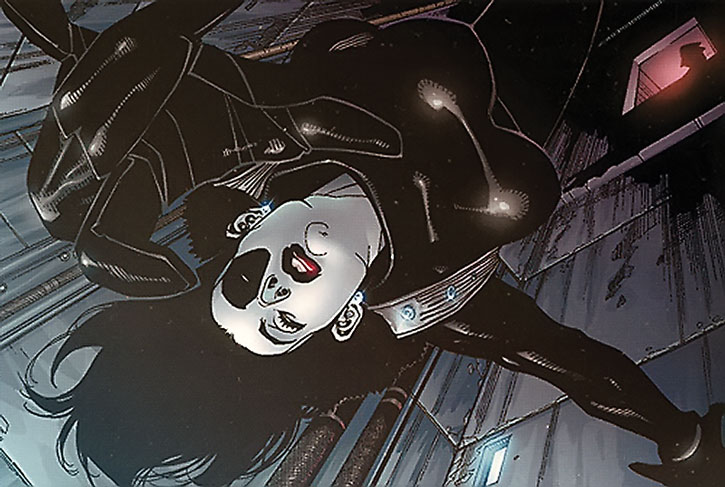 During the course of this assignment, Domino and Thurman fell in love. It was Thurman who started calling her ’Domino’ in reference to her white skin and the black dot surrounding her left eye.

Thurman also coincidentally nicknamed her Beatrice – after a character in his favourite book, Dante’s Inferno . She continues to employ that alias today in her plainclothes identity. Milo and Domino eventually got married on the base.

The couple’s relationship ended abruptly when the subversive organisation A.I.M. (Advanced Idea Mechanics) raided the government facility where Thurman was sequestered. This activated a fail-safe plan where Mr. Thurman was hidden under deep cover. Both Thurman’s spouses were told that the other had been killed, for security reasons.

Domino resurfaced years later and joined the Six Pack, a mercenary outfit led by the time-tossed mutant freedom fighter called Cable. Amid energy bursts and bullets, the two adventurers began a long and intimate friendship. During that time, Domino also tried to locate her mother, to no avail.

She resumed working as a freelance operative after most of the Six Pack was killed or maimed during an attack on one of the hidden bases maintained by the mutant madman called Stryfe, Cable’s clone.

From the ashes of the Six Pack rose the strike team called X-Force. Cable recruited several young, disenfranchised mutant heroes to staff it. He also enlisted Domino’s aid, and she took part in several missions. But all was not as it appeared : the real Domino had been kidnapped months earlier.

The man responsible — Cable’s son from the future, Tyler. Known in the present as Tolliver, a revenge-seeking terrorist, he had hired the mutant shapeshifter named Vanessa Carlyle, a.k.a. Copycat. She had successfully infiltrated X-Force while pretending to be Domino.

The team soon discovered Copycat’s treachery, but not before she managed to cause the destruction of its base. Cable freed Domino and asked her to round up the members of X-Force while he returned to deal with Tolliver.

In her bid to locate the missing mutants, Domino teamed with her former partners from the Six Pack. Subsequently, she joined X-Force as co-leader.

Domino’s career came full circle when Thurman was taken hostage by cyborgs Donald Pierce, Skullbuster and Lady Deathstrike, who intended to siphon his uncanny instincts and knowledge of world trends. Learning of the abduction, Domino tracked Thurman to Pierce’s base in Canada.

She defeated Pierce and Deathstrike, but was unable to save her husband from the fatal effects of Pierce’s information-transfer process. Pierce downloaded a portion of Thurman’s strategic brilliance into his memory banks, but to what extent is unknown.

Domino parted ways with X-Force. However she later sought the team’s help to take down the mutant assassin Marcus Tsung — capable of killing on sight, through act of will alone. Tsung had attempted to murder Domino, but she recovered thanks to the bio-organic alien organism attached to her body at the time. X-Force managed to defeat Tsung, albeit barely. 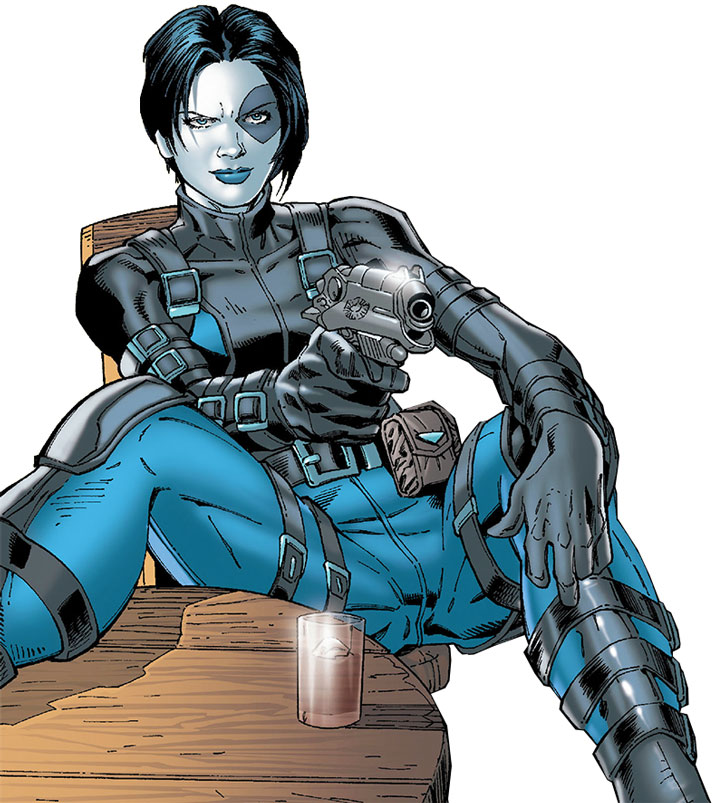 During Operation Zero Tolerance, Domino was captured by an old enemy, Ekatarina Gryaznova (aka Griffin). She had a device implanted which disrupted her mutant power and lowered her impressive physical prowess. Separated from X-Force, Domino discovered that if the device were to be removed it would leave her paralyzed from the neck down.

She sought help, finding it in the form of Jesse Aaronson (aka Bedlam), then was captured by Gryaznova’s agents. Aaronson found X-Force and brought them to Domino’s rescue, and it was his power that eventually shut down the damper device, freeing Domino’s power and restoring her agility.

Domino disappeared before the Revolutions storyline and the 6-month jump-forward in all the X-titles. She returned to lend her support to the new, militant X-Force led by Pete Wisdom until Wisdom seemingly perished in an explosion and the team disbanded.

Domino has since done more freelancing and additional jobs for Stephen Shepherd. Shepherd eventually found clues to the whereabouts of Domino’s mother. Despite strong opposition, Domino found the top secret facility where she had been born, but things didn’t go very well overall.

She discovered Shepherd had been regularly but quietly double-crossing her over the years, and that her mother was mad. Domino had to shoot her mom, apparently killing her.

She then fled with her brother Lazarus. He had been unfrozen and born 5 years prior, and left to the care of the Church of the Sacred Heart in Chicago. Her mother Beatrice, however, later proved to be alive and kidnapped Lazarus.

Domino is all woman, and lugging some heavy-duty hardware. She is usually wearing black leather outfits and is always armed to the teeth, sometimes with regular hardware, sometimes with esoteric “Cable guns”.

She is albino pale except for her hair, which is black, and sports a “Petey the Dog” tattoo around her left eye.

On first contact Domino appears to be brash, headstrong and very tough. She is a no-nonsense merc and fighter, and an experienced thief and killer. She hates it when somebody wastes her time, and doesn’t admit to weakness.

As an X-Force leader or co-leader, she was definitely the “tough love” sort of mother figure, more Nancy Reagan than June Cleaver, but still she meant well and the team always had her support and advice (whether they wanted it or not).

Although she usually suppresses this when she works along with a team, Domino is a Thrill of Adventure junkie. She receives a huge rush out of taking risk, and will routinely launch herself into daring manoeuvres.

She can and will take irrational risks, doing needlessly risky stunts, but of course she cheats. Her mutant probability powers means apparently brain-dead stunts have an excellent chance of working. 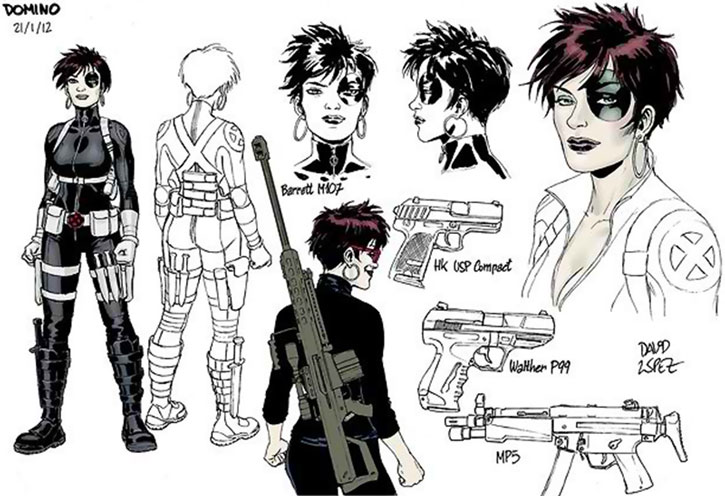 She almost never checks her climbing or parachuting equipment before jumping in, for instance – she likes the sensation of risk. When her agility started deteriorating due to the implant, she immediately went in search of a tough merc job to prove to herself she could still do it despite the increased risks.

If she has charges, however (such as X-Force), she becomes much less reckless. In fact she will often prove to be a gentling influence over her headstrong associates. Knowing very well what it means to live on the edge, she is able to keep her distance from it. Most of the time.

Domino is a sort of a fluffy kitten driving an M1 tank. She keeps most people at arm’s length with a closed, hard to approach attitude since Milo Thurman’s apparent death. This hasn’t improved since his actual death and the discovery of Shepherd’s treason.

However, toward her rare lovers and few close friends (such as Nathan Summer or Eugene Judd), she is a big softie, and can even be teenage-girl-sensitive on occasion. But never in front of anybody else, of course.

Cable: “All right – here goes nothing”
Domino : “Don’t sound so positive. That isn’t like you.”

“Hey, if you can crawl out from under the weight of your ego for a minute, maybe you can give me some info that’s actually useful ?”

Domino could easily replace Catwoman in DC history, but that would be a misuse of two great characters.

As an alternative, Domino could have been one of the many fighters who trained the young Bruce Wayne before he became Batman. She would have tutored him in acrobatics and acrobatic hand-to-hand combat, for instance. She occasionally still runs into him because of her many contacts in the military, mercenary, intelligence, and espionage communities.

Because she has fought both Bruce and Batman, she is one of the few people in the world who knows who Batman really is. She’s keeping it a secret, however; he’s kept a number of hers already.

Bonuses and Limitations:
Each use of Probability Control requires a 1 HP fee.

This is for Domino after the fall of X-Force and her second Limited Series.

Note that Domino has gotten steadily more skilled and lucky since her first appearance – many values are one or two APs higher than they were at first. For instance her initial Probability Control was about 04, and her HPs were around 030. 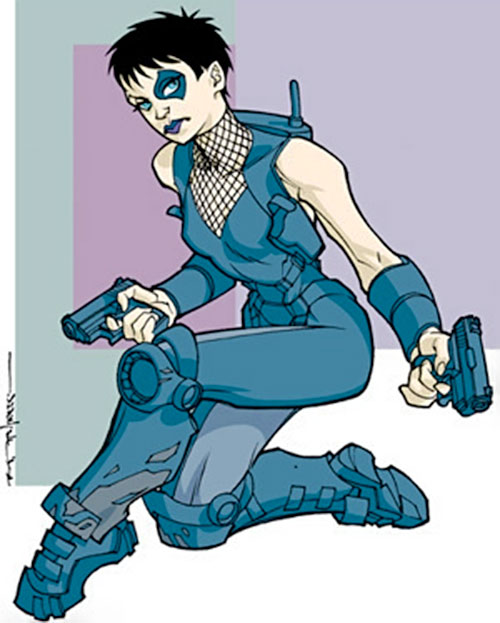 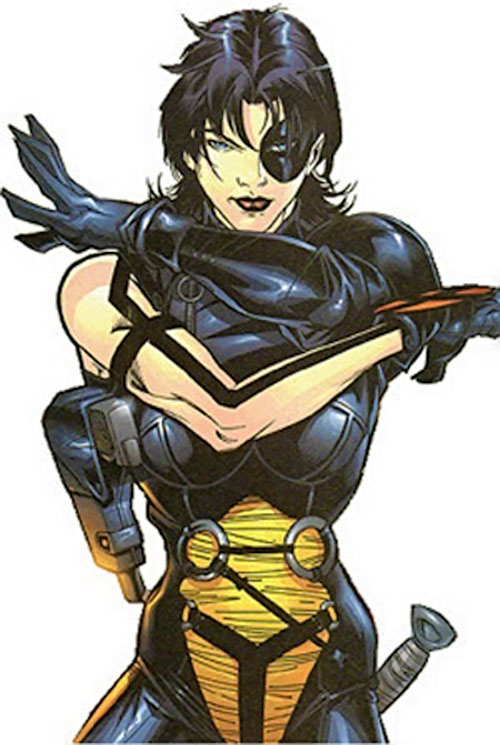 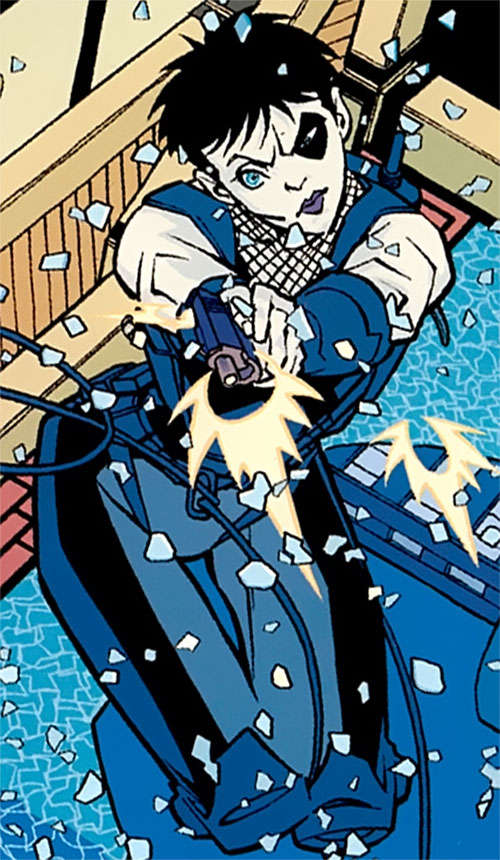 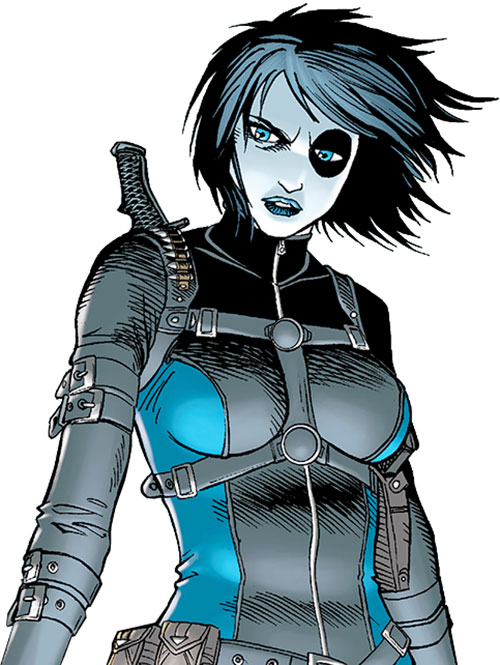 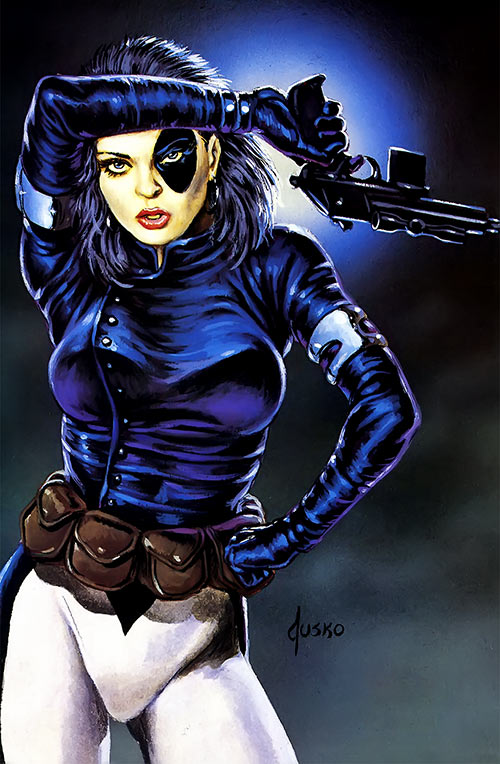 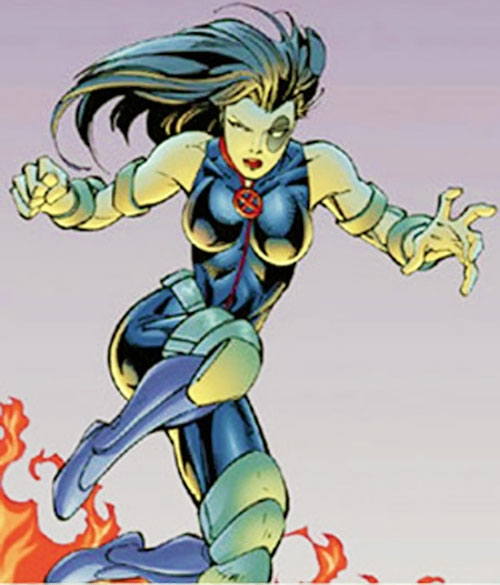 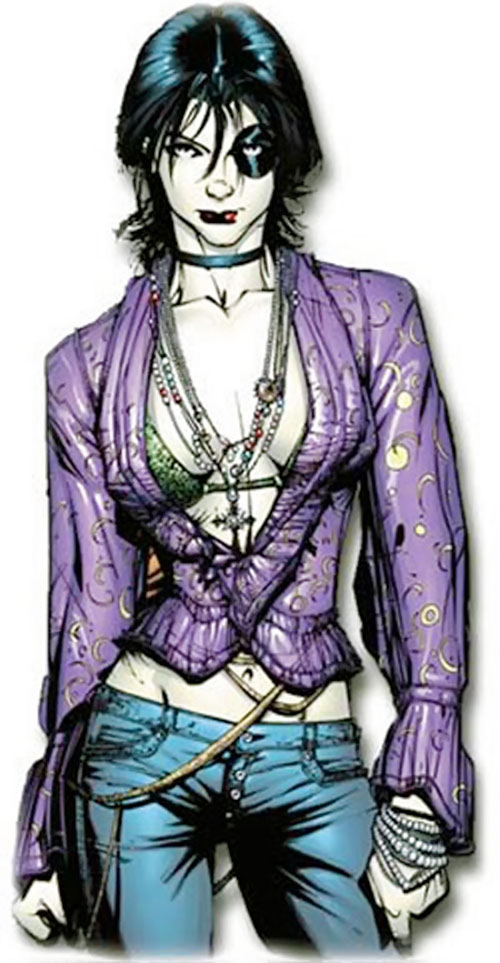 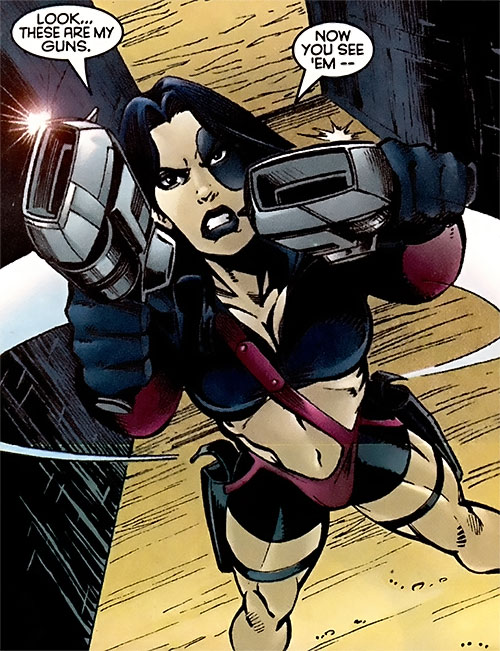 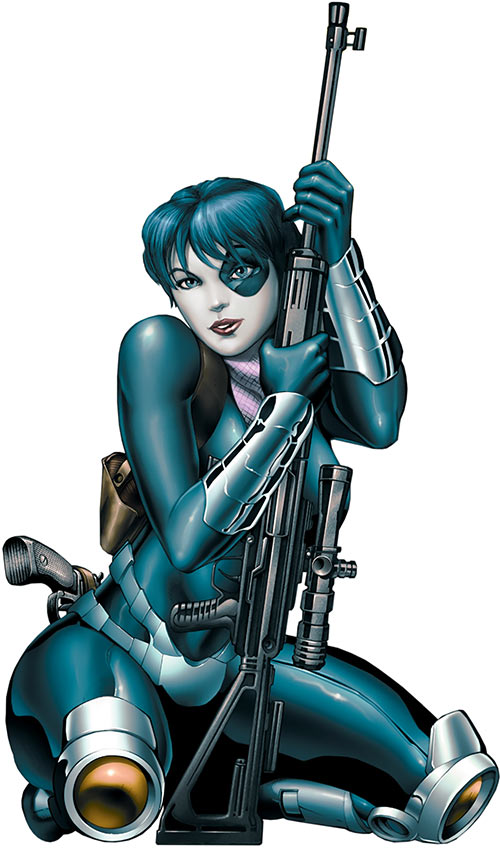 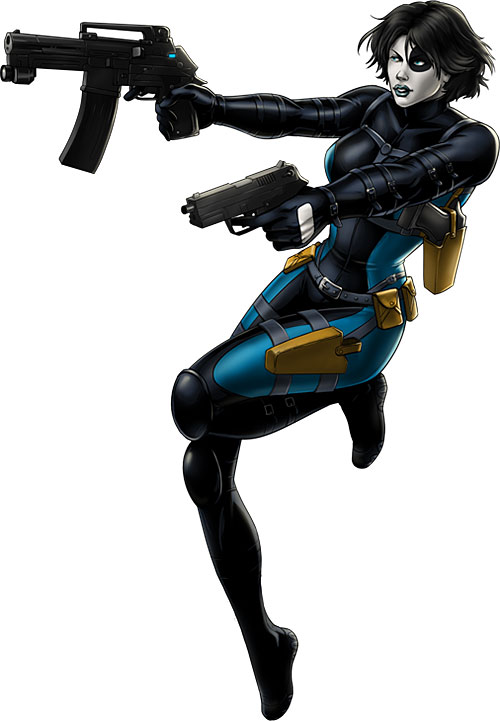