It was also connected to other 1970s creation by then-young writer David Michelinie. For more about this (obscure) angle, see our Fifteen Worlds Cosmology article.

The Starhunters are the crew of the amazing starship Sunrider. They are on a mission to retrieve alien relics somewhere in space… and to find the secret of the origin of man in the universe.

The crew has been coerced into action by having been genetically altered by the Corporation ruling the Earth. Their condition would mutate them into monsters, kill them or worse were they to stay on Earth.

The only cure for their condition is to stay in space, which counters the symptoms, or to be cured by the Corporation’s master geneticists, which they will do after the Starhunters have succeeding in their mission. 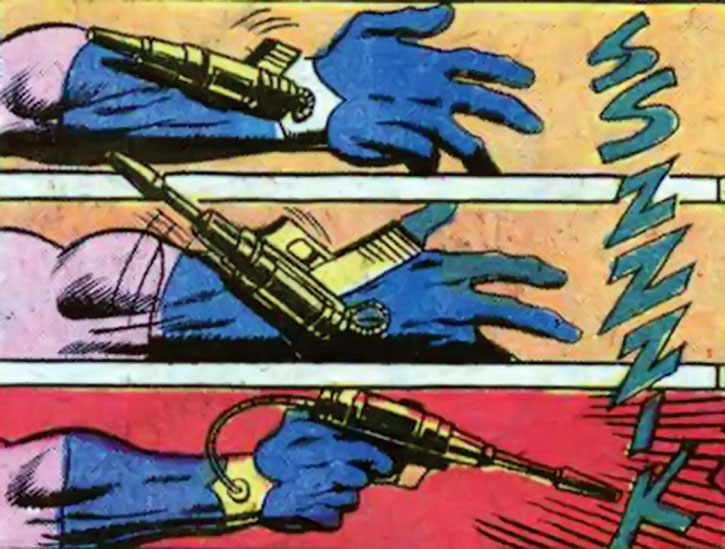 Commander Darcy Vale, of the Earth Corporation, was the original, authoritarian, captain of the Sunrider. After a while, the crew mutinied and became rebel outcasts of the galaxy. Veteran adventurer Donovan Flint take over the role as fearless leader.

Flint acts with an irrepressible talent for survival at any cost. He’s a quick thinker and acts with great agility and speed.

A man of adventure, Flint is a superb combatant. He’s highly adept in unarmed combat, melee fighting and various blaster  weapons. He’s a crack shot, his accuracy unrivalled by common men. He regularly surprises everyone by his skill with firearms and blasters.

He seems knowledgeable about Earth’s many colonies. Flint is also well-read on old and new technologies, which he will be able to use in the nick-of-time.

This classic space action hero is naturally also a great pilot and technologist.

His main problem is being a tad overconfident. As well as the fact that, after the genetic manipulation that the Corporation did, he will mutate and die if he stays on Earth for longer than 24 hours.

In 2128, the Corporation ruling Earth discovered that Somaii aliens from a mysterious Homeworld had sparked life on Earth. They feared that these aliens were a threat to their rule. Together with their ally, the evil Blood Legion, the Corporation formed the Star Hunters to seek out Homeworld and destroy it.

The Corporation selected six top candidates with varying specialities from all over the world for the job. One was a rogueish Irishman named Donovan Flint, an experienced soldier-of-fortune.

To “persuade” them to carry out the Corporation’s mission, of “finding the secret of the origin of man in the universe”, the Star Hunters had their genetic structures altered.

The team of six set upon their quest in a powerful spaceship, the Sunrider (later destroyed and replaced by Sunrider II). They had tough adventures under the leadership of Cdr. Darcy Vale, who worked for the Corporation. 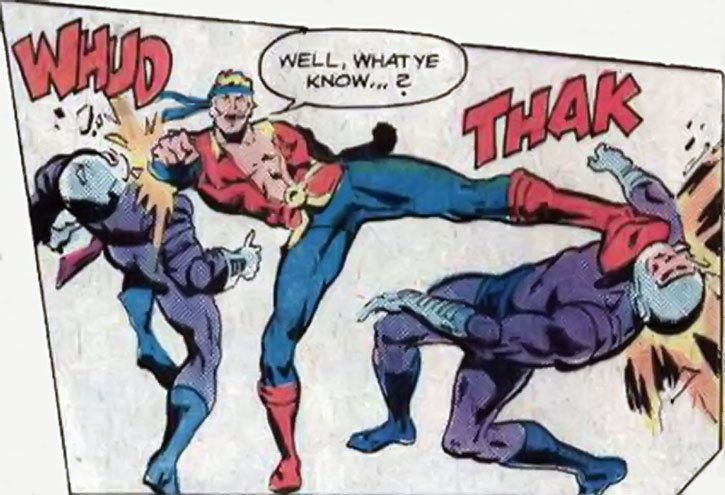 Donovan Flint was eventually killed. He was resurrected by the Somaii, who chose the Star Hunters to be their champions against the Corporation. The crew mutinied and Flint took over. Vale reluctantly joined them when she found out that she had been used by the Corporation all along.

The Hunters waged war against the Corporation, to both control over their lives and liberate Earth. During one battle their exobiologist, McGavin, was killed.

The Starhunters organized a huge resistance effort, with, among others, liberated prisoners of Avernus, the ultimate space prison. They continued their fight against the Corporation, attempting to invade the planet.

Flint is an athletic man of action with blond hair and a manly, blond mustache. He looks like Errol Flynn in his best roles. A dashing look of odd, yet fitting clothes, a headband and a couple of outstanding weapons ready for use!

He’s often seen on the move with a battlecry worthy of an adventurer, a blaster in his hand and a sparkling smile.

Flint is an impatient, impulsive, adventurous and dashing ladies’ man. Adding to his coolness factor is the fact that he speaks with an unmistakable Irish brogue, while properly performing the fine art of one-liners in space lingo. 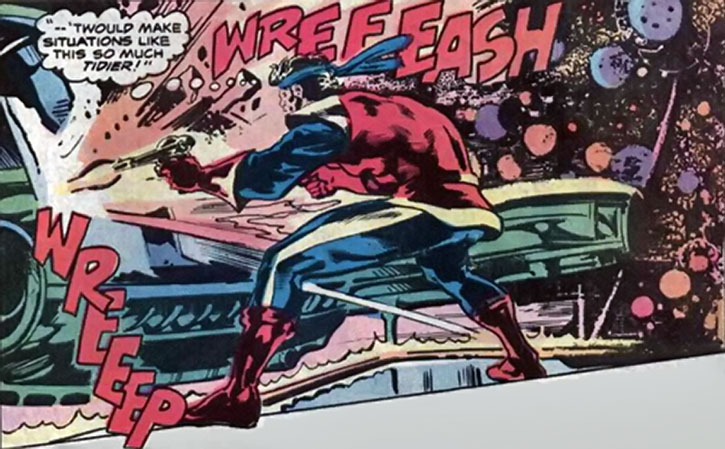 Although his skills allow him to perform amazing stunts, which he regularly and gladly does, he is somewhat prone to overconfidence. However, he is far more intelligent and cunning than what his appearance would lead one to believe.

He will usually be found in sleazy space bars drinking, womanizing and getting into fights, but can also be found playing games of hazard, as well as chess.

Naturally, such a free soul has problems with the authorities. On the other hand, he is famous enough to be acknowledged by various criminal elements, and other possible clients.

Of course, he will behave in a rather macho way with women in manners and speech. His dashing style, quick thinking and analytical style makes him into a natural leader.

In combat he is confident, effective and fast. If clearly outmatched, he will simmer down to await a better opportunity of victory. In unexpected and panic situations, he is usually the one to act first with a reasonably good plan.

Being an adventurous space hero, he will gun down opponents without remorse, but will find compassion for the underdog and the oppressed.

(As the enemy ship armada shows up) “Get under cover, the both o’ ye ! The blackguards’ve set the dogs on us ! So I guess I’d better show the mangy curs who’s master…!”

“Ye would make me a slave, Farrell, but know ye well that Donovan Flint belongs to no man ! And if I’m to die by any other than me own hand, then by the Galactic Zed, I’ll not die alone !”

“Nonsense, girly, ye saved me life ! And for that, I intend to thank ye with a reward suitable to yer actions. Therefore, I’ll allow ye to visit me quarters this evenin’ !” 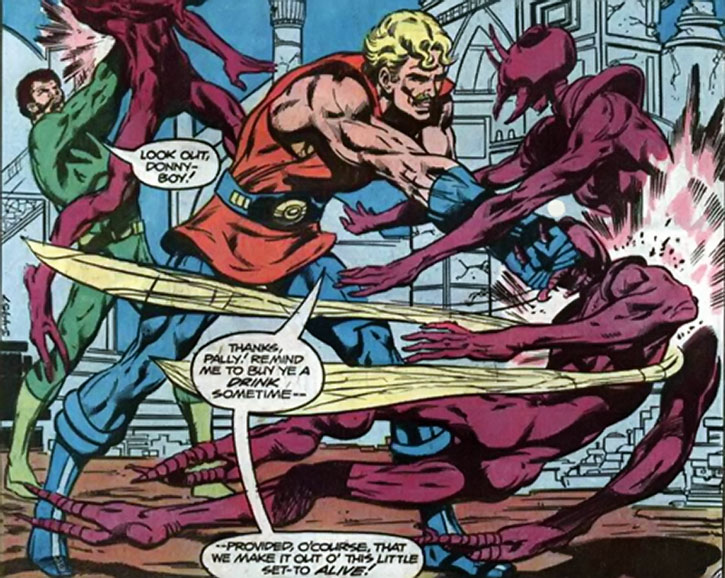 Guard ship pilot: “Attention, unidentified escape craft ! You are in restricted space ! Be warned that unless you cease operation immediately, the next blast from our shatterguns will destroy you — utterly !”
Flint: “Be warned yerself, bucko ! Ye’re talkin’ to Donovan Flint ! So ye’d better watch yer language before I stuff them fancy cannons where they’ll be mighty painful to fire !”
(Flint is actually letting them know their identities since the Corporation wants them taken alive)

Warden: “I must say, you don’t seem nearly as formidable as your reputation.”
Flint: “Sure an’ I’m sorry about that, Warden, but y’see, I don’t write me legend — I just live it !”

The story is set in the year of 2128. Very little is known about the pre-Crisis DC Universe in this time, which might place it after the great apocalypse of the 21st century, and the rebuilding of Earth. 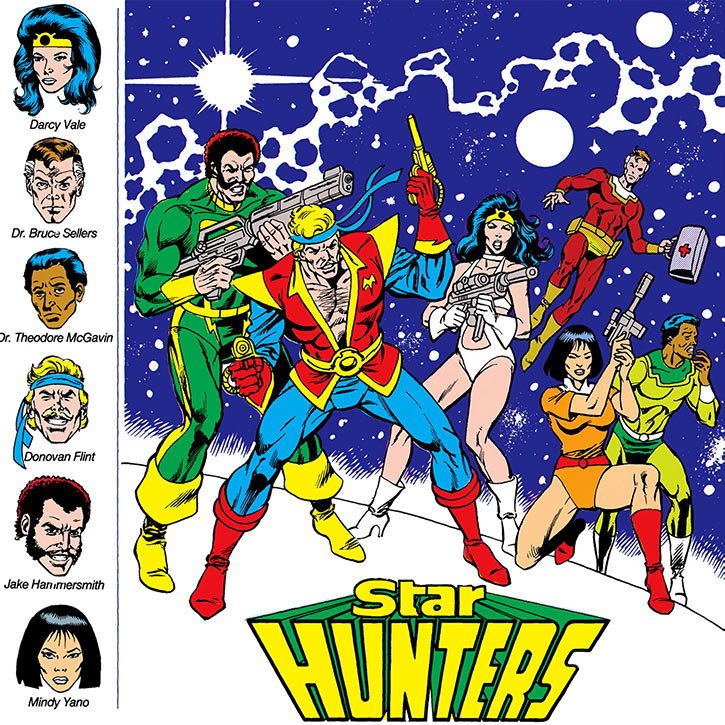 A corrupt Earth, as in the series, makes for a great starting point before the upcoming world wars previously hinted at in the Legion of Super-heroes books. Around this time there are some decades-old Earth colonies out in space as well (built since 2085 or so).

The Corporation is perfectly set up to be controlled by Vandal Savage behind the scenes. Also, their ally, the Blood Legion, being behind a lot of the conspiracies on Earth, might have descended from the Church of Blood. One of its more prominent members, Vilislith, prince of Bones, is seemingly even patterned after Brother Blood himself.

That being said, the Star Hunters could easily fit in after the rebuilding of Earth from the apocalypse, before much contact with alien races and long before the United Planets has been formed. This would nicely fill some gaps in the DC Universe history. The actions of the Star Hunters would set the Earth back on track again. 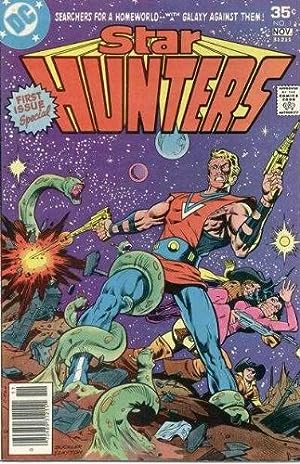 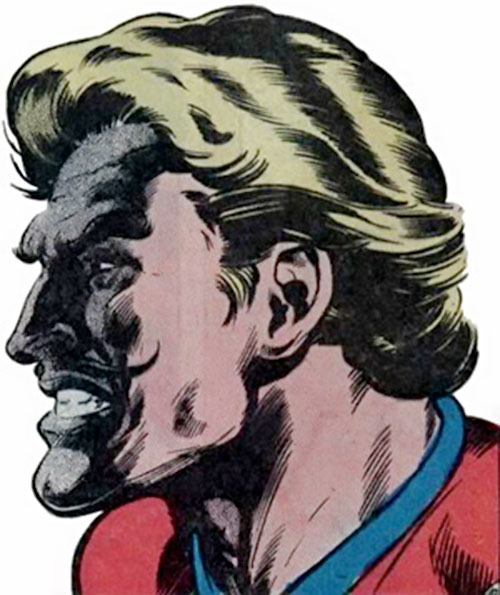 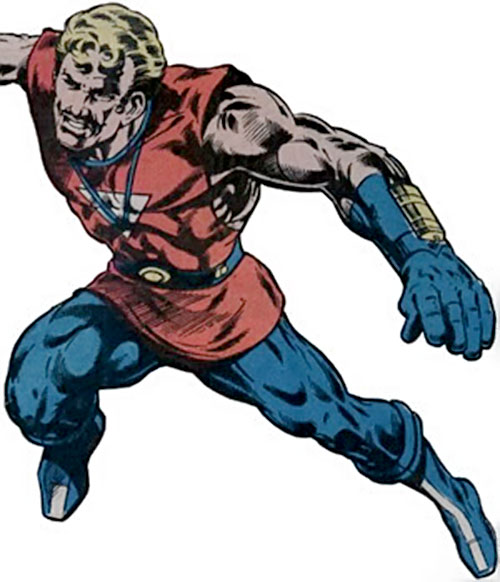 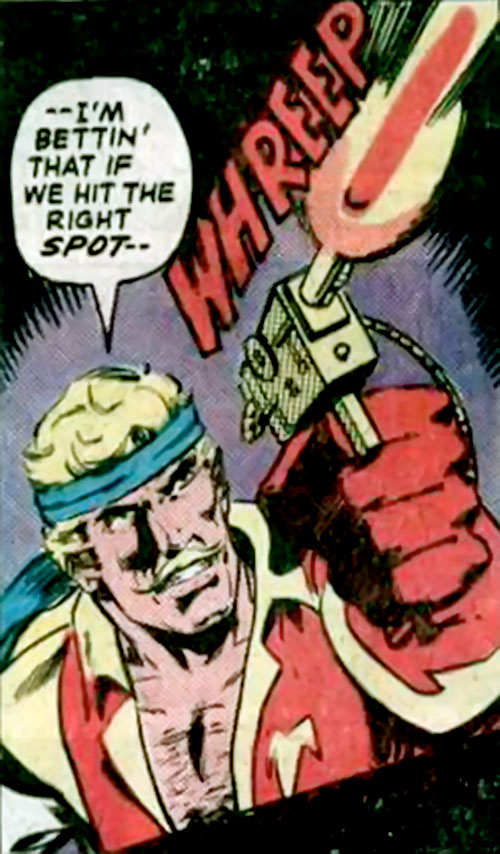 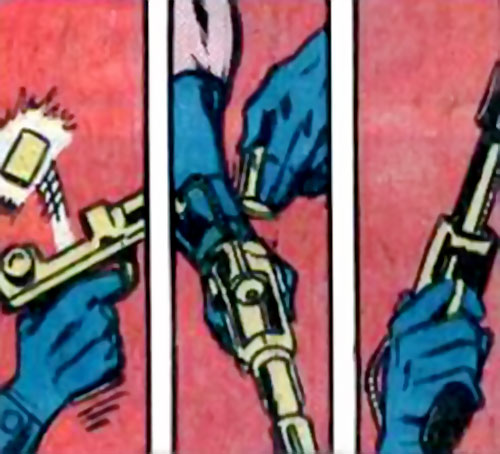 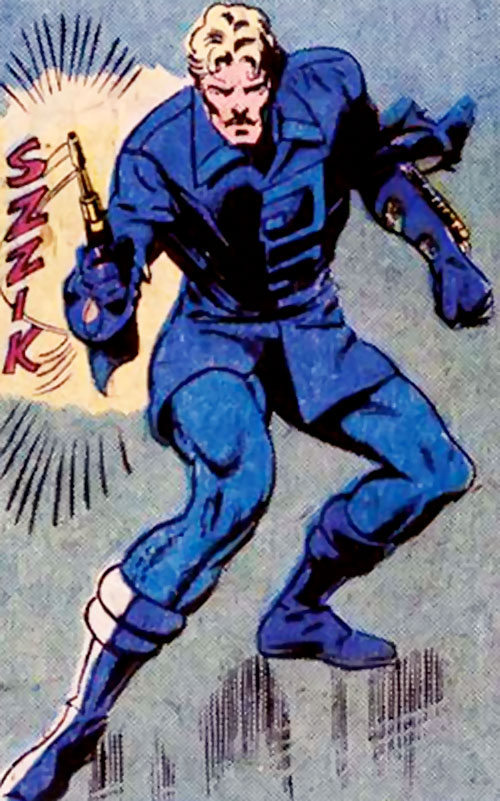 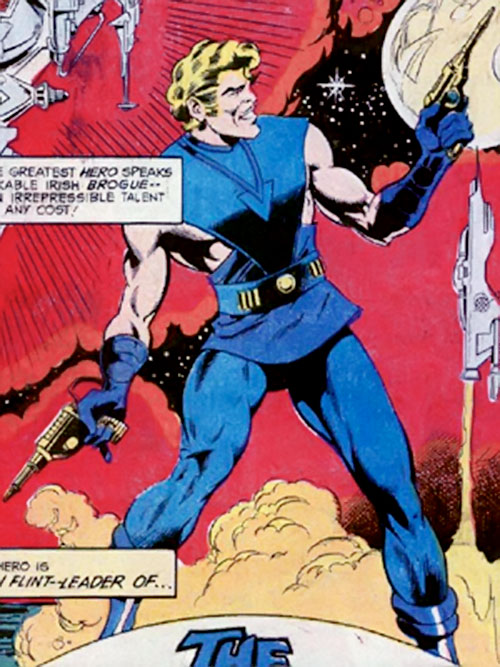 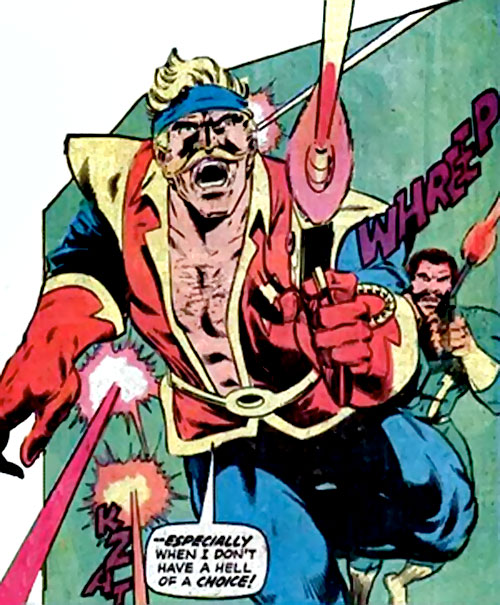