This is the second part of our Doomsday Man character profile… except in those respects where it’s the third.

It’s meant to be read after :

The Doomsday Man has been rebuilt, and doesn’t seem as powerful as it once was. He isn’t quite as indestructible, and no longer has arms lasers.

He could ignore their attacks, whereas they found it difficult to dodge or withstand the robot’s blows.

His main armament is no longer a photonic nullifier, but a tachyon blast. It is presumably based on Kerwin Korman’s designs. This blast could one-shot a Quinjet, and one hit badly damaged Iron Man’s armour.

However, this gun has a long cycle time. As the tachyon blast recharges, the Doomsday Man fights hand-to-hand. 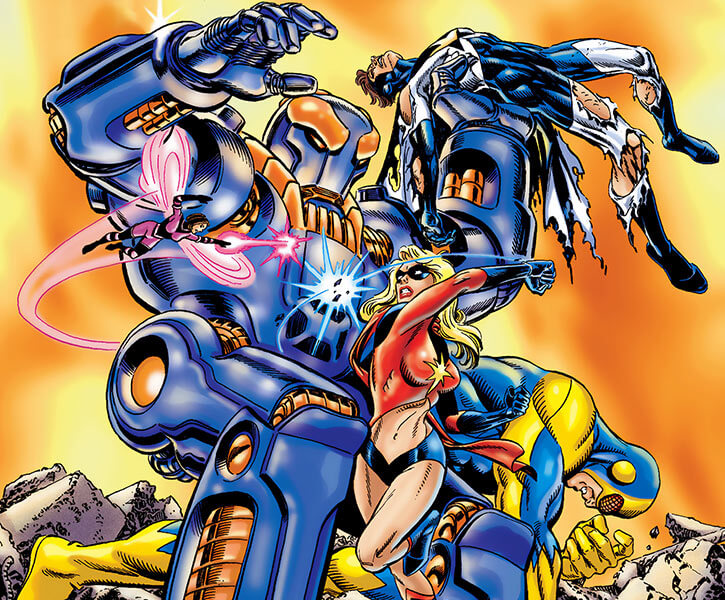 The Doomsday Man seemed to have internal systems to defend against invasion by tiny organisms. These do compartmentalisation, shutting down sections using internal bulkheads.

However, one suspects that doing that for too long would lead to heat management problems. Lack of airflow, you see.

The DM proved more vulnerable against attacks aimed at his inner structure. But the *components* within (the equivalent of organs) seemed indestructible.

One suspects the difference is between the Kronton-era components (near-indestructible) and the new A.I.M. components and infrastructure (normal durability). Thus, the original armour plates were impregnable, but they had been reinstalled over a normal combat robot torso frame.

The Doomsday Man is now a sapientCapable of intelligent reasoning. being. Beyond his CPU, he can use the brain of Kerwin Korman, who is locked within a sort of cockpit within the Doomsday Man’s torso. This provides enough computational power for a full AI. 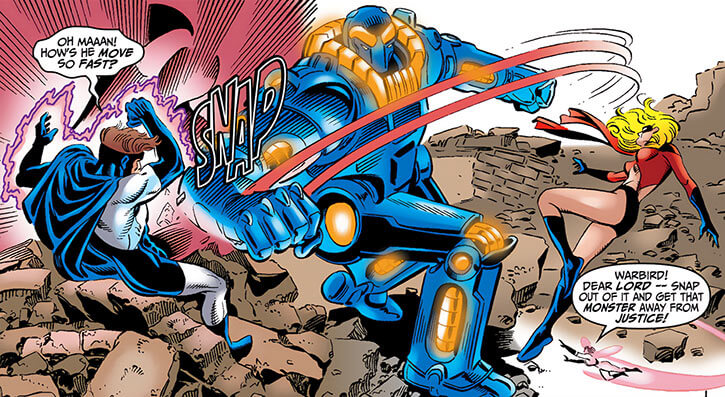 Agents of A.I.M. were the first to investigate the cavern where Ms. Marvel and the Doomsday Man had fought.

They recovered the deactivated robot, the ravaged Kerwin Korman, and perhaps a few parts of Kree technology.

To avoid heat, a decoy was left among the debris. Official searches thus listed the Doomsday Man as having been deactivated.

We can rebuild him

The Psyche-Magnitron energy explosion had intertwined Korman’s body with the Doomsday Man robot.

This intrigued A.I.M. leader MODOK. He designed a process to rebuild the Doomsday Man using Korman’s body and brain as additional systems.

However, A.I.M. eventually dropped the project. This may have been a result of the many internal conflicts and external setbacks A.I.M. experienced over the decades. The Doomsday Man was warehoused in the Bronx for years.

In 1999, said warehouse was damaged during a fight between Lord Templar and the Avengers. This reactivated the Doomsday Man, by then a sapient being.

However, Kerwin Korman’s body within the robot was failing. The Doomsday Man wanted to replace it with a fresh one, and there were few possibilities on Earth. Warbird (Carol Danvers) was the main one.

Thus, the DM recruited the Wrecking Crew to kidnap Ms. Marvel for him.

However, the Doomsday Man’s memories were decades out of date. And the Crew never were the bushiest brushes in the toilet. Thus, the thugs went after Monica Rambeau, who had operated as Captain Marvel after the Doomsday Man’s near-destruction.

Since that was going nowhere, the Doomsday Man stole from the New York City power grid to boost his sensors and scan for Danvers. He then used A.I.M. teleporters to kidnap her right off the street.

Are we not Kree ?

The Avengers could therefore respond quickly. Meanwhile, Warbird had freed herself and engaged the Doomsday Man.

But she and the Avengers found themselves outgunned. The Wasp and Giant-Man attempted to destroy the robot from within — presumably based on anti-Ultron strategies — but that failed.

The Doomsday Man fell when Justice (Vance Astro) nearly crippled himself overpushing his telekinetic powers, as he wanted to prove his worth. Creating a TK bubble within the robot and expanding it blew the DM apart.

Warbird and the Avengers then tore the cockpit open to expose Korman.

Korman explained what had been going on, and the Avengers moved him to a hospital. The issue was how to safely disconnect him from the Doomsday Man. 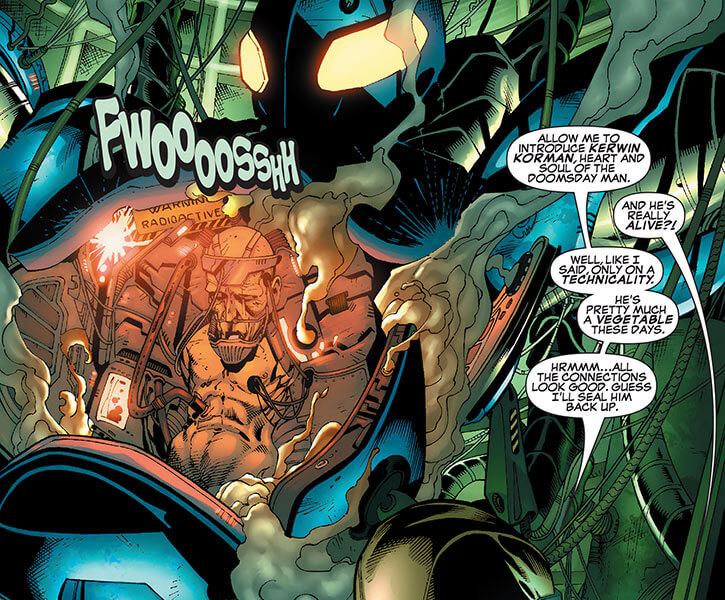 Flesh is better than metal

This incident reignited the A.I.M. interest in the Doomsday Man. They raided the hospital to recapture Korman and the DM’s torso. Then they apparently repossessed the limbs and other components.

This drew no Avengers response – presumably they were busy elsewhere. Say, the war in Slorenia against Ultron.

But A.I.M. once again had to admit they were stumped by the Kree-altered, biologically-merged, Kronton tech. The Doomsday Man was reassembled and could be reactivated, but he would be uncontrollable.

Sabotage did lead to the Doomsday Man being turned back on. However, it also ensured that the Kerwin Korman mentality was now dominant. The sapient Doomsday Man persona still was there, but he was suppressed.

However, the actual plan was apparently for Korman to get himself killed by Ms. Marvel. Thus, the torso cockpit had not been closed properly.

The Doomsday Man hasn’t been seen since. Without a Kree-altered “rider” within, it is possible it would have to be entirely reconstructed to return in a new version, with a new computational and power architecture. 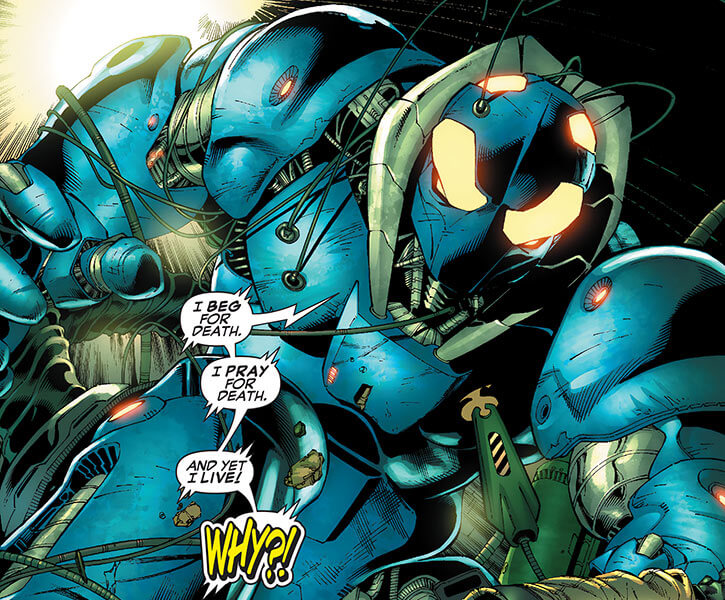 The Doomsday Man was chiefly interested in keeping himself functional, which meant procuring a new “rider”.

He planned fairly intelligently. He was terribly out of date, but he knew that. Hiring the Wrecking Crew was chiefly done to have associates familiar with current affairs.

The DM is a different individual from Kerwin Korman. However, there is “leakage”. Interestingly, the concepts and motivations that have most infected the new consciousness of the Doomsday Man are Kree.

(Which suggests plenty of interesting things about how the Psyche-Magnitron works. But we’ve discussed that in the Carol Danvers character profiles.)

The transfer was accidental and spotty. Thus, the Doomsday Man thought that he and Danvers were fellow Kree warriors and needed to be united, but that didn’t make much sense.

He also went out of his way to outfit her with her 1970s Ms. Marvel costume, but was unable to explain why.

(Interestingly, the only context in which the Ms. Marvel outfit is a suitable Kree uniform is the Psyche-Magnitron memories synthesised to transform Danvers. Had the DM been operating on actual Kree data, he would have clad her in something akin to the white and green uniform Mar-Vell wore during the 1960s.)

The Doomsday Man ruthlessly disposed of the Wrecking Crew once they turned out to be useless (the Scarlet Witch narrowly saved them). This too may have been the result of Kree warrior, Darwinist ideology.

“I need you — to complete me ! We are both born of the Psyche-Magnitron ! We share the Kree warrior’s bond !”

Distinct Appearance, Attack Vulnerability (-2 CS RV on attacks against its non-Kronton infrastructure), Fatal Vulnerability (Not having a Kree-altered person hooked up in his cockpit).

While based in A.I.M. warehouses, the Doomsday Man could operate machinery within and had the listed Wealth score.

Many stats are arbitrary due to lack of material.

Acuity is the worst offender in this regard – what the Doomsday Man’s sensors could pick up is a mystery.

Writeup completed on the 6th of December, 2018.