This strange little getaway pilot was seen in Alan Moore’s early Captain Britain story, in 1981. He’s based on Alice in Wonderland, as with the rest of Captain Britain foes the Crazy Gang.

The Dormouse possesses no super human powers, except for being created by Jaspers in the form of a humanoid Dormouse.

He is the pilot of the team, and can usually be found flying the Tea Pot the Crazy Gang use as their getaway vehicle.

The original Crazy Gang appeared as creations of Mad Jim Jaspers in the Earth-238 alternate reality. There, James Jaspers was a superhuman with vast psionic  powers. He succeeded in killing off all of that world’s superheroes.

The Crazy Gang, along with Mad Jim, went on a crime spree terrorizing the hero-less England. They were stopped by the sudden arrival of the Captain Britain of the Marvel Universe (Earth-616 ), who had been sent to Earth 238 in preparation to confront the Jaspers of Earth616. Jaspers had unleashed his Reality Warp, which basically turned the Earth, and eventually it’s entire universe, insane.

Although both Captain Britain and Saturnyne tried, they could not defeat Mad Jim. Thus, the Omniversal Council was forced to destroy the reality of Earth-238. The Dormouse only appeared in this reality, and was not recreated on Earth-616.

A dormouse in the form of a man… with a gaudy pink jump suit and crash helmet.

Didn’t have time to show a personality, but would no doubt be similar to the Dormouse from Alice in Wonderland. As he’s the team’s getaway driver, I have assumed he does not constantly fall asleep. 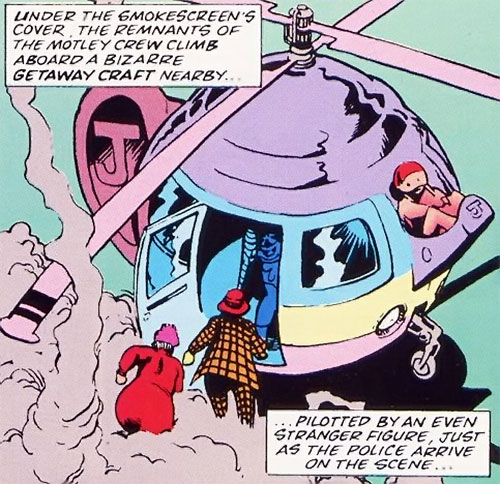