Double Edge is a competent fighter. He wields a two-handed sword to devastating effect.

Double Edge just appeared one day in Los Angeles, and ended up crossing Solitaire’s path. After alternatively clashing and cooperating with Solitaire several times in one night, he managed to gut and apparently kill the hero.

Declaring that his night was now balanced, Double Edge left. He was unaware the Solitaire’s regenerative power allowed him to survive.

Double Edge is obsessed with “the balance”. Whenever he does a good deed, he has to commit a evil deed of equivalent magnitude.

This madman can create quite complicated situations as he keeps a semi-incomprehensible tally of the moral valence of his actions. Thus, his behaviour keeps flip-flopping.

“Stay away ! The balance must be restored !”

“And what more beautiful symmetry ? The life I gave, I’ve taken back. There is stillness in my heart. Nature smiles.”

Double Edge could easily be a one-time Batman villain. Perhaps he also encountered the Huntress and her life was narrowly saved by Kevlar lining in her costume after he unexpectedly turned against her.

Bonuses and Limitations:
Martial Artist (EV) only to boost the EV of melee weapons (-1).

Drawbacks:
CIA toward Maintaining “the balance”. 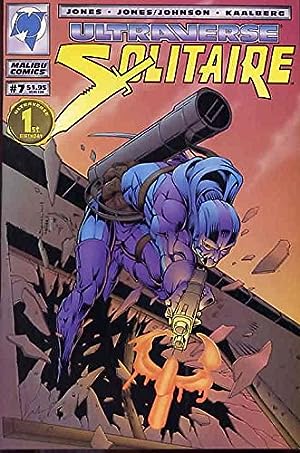