Dozer is a soldier whose natural strength and bulk makes him particularly fit to use heavy weaponry. He’s so strong that he can hip-fire ordnance that normally requires a vehicle. He even modified regular equipment to fit his rather unique ability.

As usual, his symbiote  enhanced his natural abilities. It made him gigantic (big enough for a man to be smaller than his knees) and superhumanly strong and durable.

He grew so big that, at first, he was unable to move by himself. However, Grail taught him meditation techniques to control his symbiote’s size enhancement problem.

And as usual, the prolonged contact with the symbiote has affected its wearer permanently, making him naturally bigger and heavier than he was before.

Dozer was a US army soldier, drafted by Dane into his version of Team 7.

Grail had taught Dozer how to control his size through oriental meditation techniques. However, when he experiences emotional stress (like when he saw Pilgrim come back), he loses his control and grows too big to stay up again.

Throughout Wetworks’ saga, Dozer has but a minor role, acting as the group’s dumb brick  and heavy firepower support.

Drakken, the Vampire Nation’s throne usurper, then made his big gambit. He managed to capture the entire team and made Dozer grow into a 100 m tall pyramid. 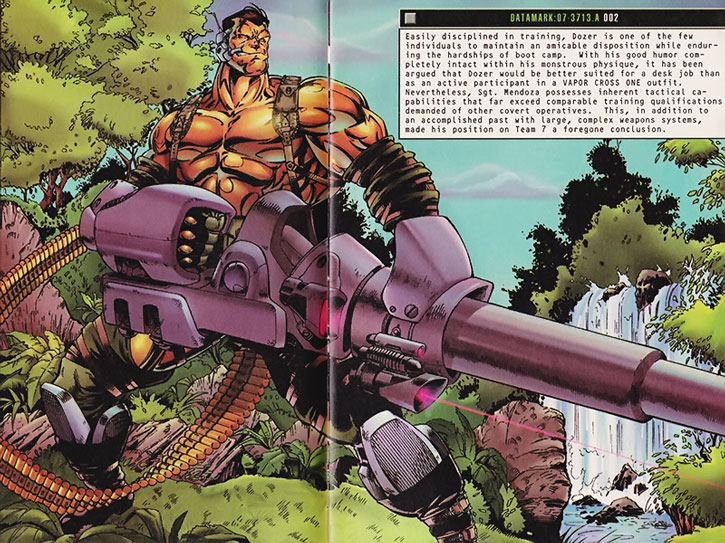 This pyramid was an antennae that relayed the combined power of the captured members to ensure Drakken’s power in an area 800 miles around Phoenix. In this area, nothing could move unless Drakken allowed it.

The day was saved by Pilgrim, as Drakken was oblivious of her werewolf heritage. Though freed, Claymore took upon himself to free Dozer of his tremendous pain, and the zone of Drakken’s influence. He killed Dozer and himself in the process.

No longer bound to his 4-stories tall armor, Dozer looks like a very big, broad and strong man.

His head is very small compared to the rest of his body.

Dozer is of the fine humour type. Taunting his adversaries, his teammates, even mocking himself.

Bonuses and Limitations:
Density Increase and Growth are Always On (-1) and Already Factored In. 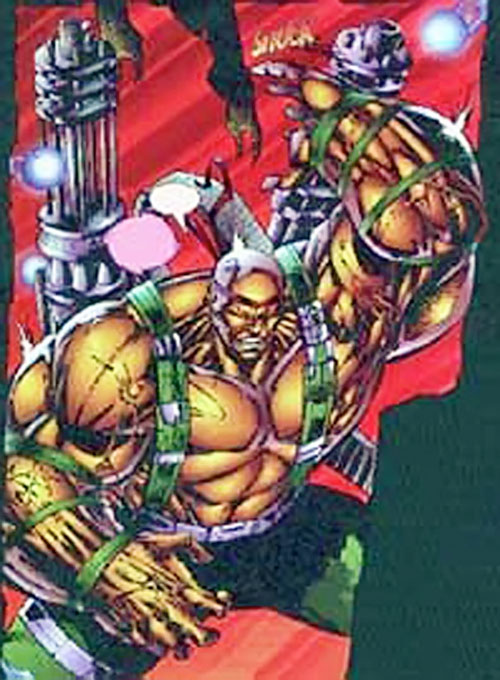