Dozer is a soldier whose natural strength and bulk makes him particularly fit to use heavy weaponry. He’s so strong that he can hip-fire ordnance that normally requires a vehicle. He even modified regular equipment to fit his rather unique ability.

As usual, his symbiote  augmented his natural assets. It thus made him gigantic (big enough for a man to be smaller than his knees) and so very strong and resistant. He grew so big that he was unable to move by himself.

Dozer was a US army soldier, recruited by Dane into his version of Team 7.

But his symbiote made him so big and so heavy that he became unable to move by itself.

There were giants striding

So Wearing designed him a special suit for him to fit in, and to help him moving. The suit is so big that it contains a complete medical crew in one of its leg.

The armor is also more armed and armored than a battle tank, which suits Dozer fine as he loves big guns. To help him see his surroundings, Grail helped him by creating small flying orbs that Dozer can remotely control. The orbs then transmit him their 360° surroundings.

It is not clear if they’re parts of Grail’s or Dozer’s symbiote. As they’re light blue, the former seems the more likely.

Due to the bulk and size of his armor, Dozer often stays out from the action, as back up and fire support. Knowing that he can easily bring the house down to clear the way, his teammates can relief themselves of the question of the retreat.

He’s kept updated of the Sit Rep through the “eyes” of the orbs, and the telepathic links between the Symbiotes.

The rest of Dozer’s history is in part #2.

During the time when Dozer couldn’t control his size, he’s always seem in his battle armor. It looks like a big pink egg, with small Dozer’s head protuding as well as 4 big stomp-like limbs.

The “arms” are rocket launchers, the “legs” are cargo holds. On the “shoulders” there are huge SOTA heavy assault cannons.

Before he got the symbiote and once he learned to accept his size problem, Dozer is of the fine humour type. Taunting his adversaries, his teammates, even mocking himself. Nevertheless, his big size makes him suffer, but he tries to keep the pain for himself.

I give him STR 06 BODY 06, as I consider it the ultimate human limit. Adjust this to your own genre rules related to human limits. 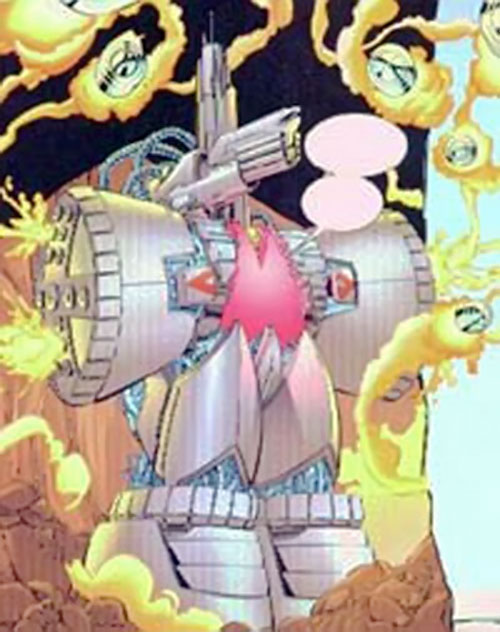