Drabny is an obscure foe of the Challengers of the Unknown. He was first seen in 1959, back when Jack Kirby was still on the book.

Here are our very old notes about him. Back when Sean wrote this, our approach to character writeups was way more casual.

The helmet was one of three items created by ancient alchemists that Drabny (also spelled Drabney) found and stole. The other two were:

For instance, with the help of the goggles, he built several vehicles he called “Star Cars”. These had magnetism control powers. And supposedly other weapons as well, but Drabny was defeated before he got to use any of them.

Since they were created by alchemists, it’s possible that the helmet and goggles are actually occult artifacts. But they look like high-tech gadget.

In COTU #42, he is seen in a flashback to COTU#8 in which he used his helmet to control the elements. Notably, he opened up the ground beneath the Challs. He is also able to use it to burrow through the floor of his cell and to disintegrate “tons of lava rock”.

Before Kra breaks Drabny out of jail, Kra also liberates Drabny’s helmet. The goggles and serum are nowhere to be seen.

In addition, he is seen using his helmet to telekinetically lift an ocean liner.

He joined the LoCH in COTU#42, and was seen again in COTU#45. He is the only normal-sized member of the League. Seemed like a real loser.

He also wears a blue jumpsuit and ordinary shoes.

He’s a pathetic loser with lots of power. If only he could figure out how to use it well.

“Show them the awesome power of Drabny ! Show the world my power !” 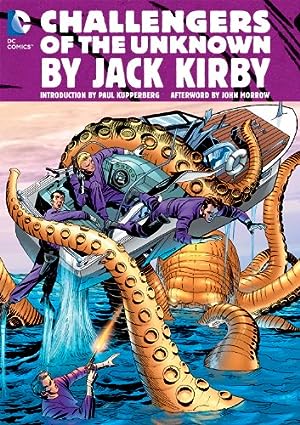 Challengers of the Unknown by Jack Kirby