This version of Dracula is the one who appeared in the first episode of the fifth season of Buffy the Vampire Slayer, in 2000. For more context, y’all can peruse our Buffy character profile.

Count Dracula is a vampire. He is an excellent hand-to-hand combatant and is skilled with many medieval melee and ranged weapons. Dracula has gained, through unknown methods, a variety of magical powers. These apparently follow Romani magical traditions.

He can read minds and appear in dreams. Often, he will enslave a local idiot (such as the kind who eats insects and gets the funny kind of syphillis) as his emmissary, his eyes and ears in the daylight. He can alter his form to that of a bat, a wolf or a rat. He can even disperse his body into a kind of a mist.

His most impressive ability, however, is his power of persuasion. An extremely charismatic and sexy man, he uses that charisma to manipulate and control people.

A bloody warrior and general, Voevod Vlad III of Wallachia (1431-1476) lost and regained his father’s throne (at least twice) to invading Turks, Hungarians, and his brother Radu. He was said to be big on law and order and family loyalty. But really, what is known of his actual past is muddled with myth in Bram Stoker’s book Dracula  and many subsequent retellings of his legend.

Dracula is not well liked among older vampires. The consensus is that his legend and stories finding their way into the public eye gave everyone in the world the knowledge of the ways to kill vampires.

Spike claimed he and Dracula were “old rivals”, but once he got famous he forgot about his old foes (and the “poncy bugger” owes him 14 pounds). It is not known if there is any truth to Spike’s claims.

Anya also claimed to have “hung out” with Dracula a few times when she was still a young vengeance demon circa the 16th century. Dracula commented on how a man she cursed was “doomed forever.”

In September of 2000, Dracula came to Sunnydale. He had previously established an estate there, which no one ever seemed to notice.

He came to attempt to seduce and sire the slayer, Buffy Summers. By gaining her confidence as well as enslaving Xander as his emissary, he almost succeeded. He got so far as having Buffy taste his blood. But once she did, she managed to break his hold over her.

She staked him and waited until he began to reintegrate, then staked him again, saying “You think I don’t watch your movies? You always come back!” Dracula decided to wait a while before he reintegrated himself again.

A very handsome (though pale) man of eastern European complexion. Dracula has long black hair to just below his jawline and piercing blue eyes. He was played by Rudolf Martin .

He appears to be in his late 20s and dresses in a very expensive manner. He has a slight Transylvanian accent and a rich voice. He stands about 6’2”.

Dracula is very reserved and cool under pressure. He maintains a level of personal confidence that borders on arrogance. He is a ladies’ man to be sure, and is obsessed with seduction.

He is constantly trying to romanticise vampires. Thus, Dracula loves nothing more than seducing a woman to the point of her begging him to sire her. Dracula surrounds himself with an “old money” image, his private castles even having lit torches instead of electric lights. That’s even though fire is one of the effective means of vampire death.

“You think you know… what you are… what’s to come. You haven’t even begun.”

“All those years fighting us. Your power so near to our own and you’ve never once wanted to know what it is that we fight for ? Never even a taste ?”

(Referring to Buffy) “Why else would I come [to Sunnydale] ? For the sun?”

“Serve me well. You will be rewarded. I will make you an immortal. A child of darkness that feeds on life itself… on blood”

(Referring to Xander) “You are strange and off-putting.”

“I have searched the world over for you. I have yearned for you. For a creature whose darkness rivals my own.“

“Do you know why you cannot resist ? … Because you do not want to.”

Drawbacks:
Blood Craving, Creature of the Night, SIA (forming a personal bond with those he wishes to sire), MIF (Crosses), Living Dead, Miscellaneous (a vampire casts no reflection in a mirror, gains sustenance from blood instead of food and water, and do not need to breathe nor give off body heat), Public Identity, SPR (A vampire cannot enter private dwellings of living humans without an invitation from one of the residents), Unholy.

(These Drawbacks are only suitable for Buffyverse vampires) :

Vampires rely on blood for sustenance, and drawback acts like Rage with a target number equal to APs of time without blood -15. Should a vampire consume human blood regularly (at least once or twice a day), they gain Rage at a severity depending on the length of time they’ve been consuming the blood:

Should a vampire consume human blood than go without blood as above, use the higher target number.

Creature of the Night

When exposed to direct sunlight, vampires burst into flame. After 1 phase of exposure, direct sunlight acts as a 2/2 AV/EV fire attack. Each phase of continued exposure accumulates a -1 CS penalty to the OV and RV each. A blanket, thick tweed suit or other covering can increase the vamp’s RV (as long as the covering is opaque) according to the Partial Armor rules.

Vampires are abominations that are outside the realm of religion. Contact with holy water, consecrated land, bibles or crosses is considered akin to a Mystical Flash attack using 2/2 as AV/EV and the vampire’s Body/Body as OV and RV.

The normal Shade power does not protect against this attack (a +1 FC Bonus may be bought to allow for things such as “necro-tempered” glass). Ingesting Holy Water also triggers an attack like described under Creature of the Night, except covering does not protect the ingester.

The matter of breathing

Due to the vagaries of television production and differing writers’ works, the concept of whether or not a vampire needs to breathe proves problematic. By the writer’s intent, vampires do not need to breathe and cannot die from asphyxiation.

However, evidence from the shows suggest that vampires breathe on a regular basis. To combat this, the GM may decide to use this optional rule. Instead of Life Support (breathing), all vampires get Sealed Systems: 15 instead.

Source of Character: Buffy the Vampire Slayer 5.1 “Buffy Versus Dracula”. 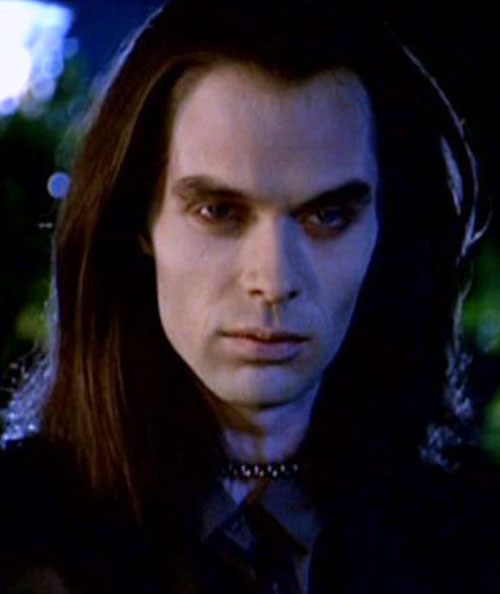