This profile is among our older technical notes, and thus not a full profile. However Marvunapp has a gigantic history of Dracula  that should be amply sufficient in completing our numbers and notes.

Vlad Dracula was born in 1430 as the second son of Transylvanian nobleman Vlad Dracul in Schassburg, Transylvania. In 1431 he received the title of Prince of Wallachia.

By 1437 he had seized the throne and later allied with the powerful Ottoman Turks threatening all of Europe. In 1444 he and his younger brother were betrayed and taken as slaves by the Turk leader Murad II.

In the court where Dracula served, he learned cruelty and to hate humanity.

During his captivity his father was killed along with his older brother. In 1448 Dracula escaped the Turks and regained the throne of Wallachia with Turkish help. He ruled for some months and fled to Moldavia. His regime here was overthrown in 1451. Dracula then went to Transylvania to seek out the great Transylvanian warrior John Hunyadi.

Hunyadi taught Dracula to become a great warrior. Between 1451 and 1456 Vlad was forced to marry his first wife Zofia, whom he hated and later exiled together with their daughter Lilith. This daughter later became his great nemesis Lilith.

The Impaler is dead

In 1456 Dracula became leader of Wallachia again and fought a war against the Turks. In this war he earned the nick-name of the Impaler. With his second wife Maria he had a son, Vlad Tepelus. In 1459 Dracula was defeated by the great Turkish warlord Turac. Dracula was brought to a Romani healer to be healed, but she killed him as she was a vampire.

Dracula returned as a vampire and killed Turac, who had killed Maria. Dracula then defeated Nimrod, the current leader of Earth’s vampires, and succeeded him. He enhanced his own blood with that of Varnae, the sole survivor of the first breed of vampires. These enhancements gave Dracula powers far beyond those of any other living vampire.

Here Dracula’s unlife as a vampire truly started. Between 1553 and 1566 he had several encounters with the puritan adventurer Solomon Kane who finally killed him. Dracula was however brought back to life again by unknown means. In 1606 he moved to the current Castle Dracula near Transylvania’s Borgo pass.

In 1762 he moved to France where he fought a great enemy of his, the sorcerer Cagliostro. In 1789 he returned to the Borgo pass. Here he was slain by a nobleman, Russoff, but returned later to unlife again.

In the 19th century his main foe was Abraham Van Helsing. In 1862 he killed a rival of Otto von Bismarck as persuaded by the rival’s wife so that Bismarck would become Minister-President of Germany. In 1875 and 1890 Dracula was killed by an American. Later on he was again resurrected.

In 1890 he moved to England with one Jonathan Harker’s help. Dracula menaced Harker’s wife and was hunted down to Transylvania where he was killed. Harker’s notes were collected by the author Bram Stoker who wrote the book Dracula.

Dracula was later revived by a henchman but again killed by Frankenstein’s monster. Later he was resurrected again and he killed both Jonathan Harker and Abraham van Helsing. In 1914 Dracula murdered intruder Lord John Falsworth of England, who would then become Baron Blood.

Quincy Harker, son of Jonathan Harker, continued the war against Dracula. He was joined by Taj Nital, whose son had been killed by Dracula. A Scotsman trained by Harker succeeded in killing Dracula in his own castle.

Quincy Harker finally killed Dracula and died himself in the attempt. However Dracula returned and turned Rachel van Helsing into a vampire. Rachel requested to be killed by the x-man Wolverine, who did it.

Later when Dracula had turned to magic the Darkholders succeeding in removing all of his vampiric limitations. They made him more powerful than ever. Finally all vampires on Earth were permanently destroyed and banished by the use of the Montesi Formula by Dr. Strange, Blade, Drake and King. King, who was a vampire, was saved by Strange himself.

Some years later the effects of the Montesi Formula were disrupted and vampires returned to Earth.

In a recent adventure Dracula saved humanity from a faulty vampire-killing virus. He destroyed the entire village that contained the victims of the virus. His only reason was apparently that had mankind not survived he would have no more victims to get nourishment from…

Dracula is a tall, dark man. He has a back-combed, slicked dark black hair and shining red eyes. He always has a black mustache and sometimes also a thick dark black beard. The Count always wears the gentlemanlike clothes of a true count.

He is clad with an elegant suit of dark blue and a white shirt along with a red or blue cape. He is also surrounded by a very powerful aura of evil.

All in all he can if he wishes look extremely presentable and charming, but might also deeply scare his foes if that suits his plans. Ladies might easily fall for his charming charade. Upon appearance his foes often underestimate him which leads to their final demise.

Dracula is both a monster and a cunning man. He can at some times pretend to be a very charming man, other times he plans the defeats of his enemies carefully. At other times he can become a true completely ruthless beast with no remorse for anything except for his own well-being. Dracula has a very good balance over these sides of him and may use any which suits his purposes.

To him humans are mere sheep to be lead or taken for slaughter. He enjoys the fear, and delights in the pleasure of drinking the blood of innocent human beings. He thinks of himself as a great warrior. In his opinion, only he is worthy of leading the vampires of the Earth and perhaps humanity.

All men and vampires should be considered his inferiors, sheep that can used to achieve whatever goal is at hand. His goals are usually such that can lead to a more powerful position, destruction of his enemies or the acquisition of a desired tool or pure blood.

To Dracula his name only means power and honor. It is something which should be feared, respected and worshiped upon hearing it. He is extremely secure in himself and truly believes in his superiority over anything that lives. He acknowledges no one as his equal and shall not be ruled by neither Heaven nor Hell.

He hates “Satan” and his daughter Lilith nearly more than anything else. His constant vampire hunting enemies throughout the ages come second.

He knows that he is an extremely powerful being. He would in no instance ever give up against an enemy – he would rather die. Important is that even though he is a very ruthless man there is also honor. Once he has given his word he will always hold it – though he sometimes carefully twists the words.

Throughout most of his existence he has feared and hated the occult and men of magic. Only in recent years Dracula has turned to the use of the occult as he realized he might gain a lot by doing so.

Dracula is the lord of the Vampires. The DC Universe holds a rather low profile on vampires. A possibility is to increase vampire activity in DC and then use Dracula as the head vampire. Otherwise he is a character for a powerful mystic campaign with player characters made for at least 450 HPs.

Remember that the general public only believes that Count Dracula is a mythic character of the 15th century and the his modern exploits are fictional only. 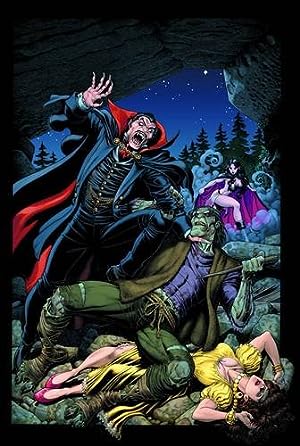 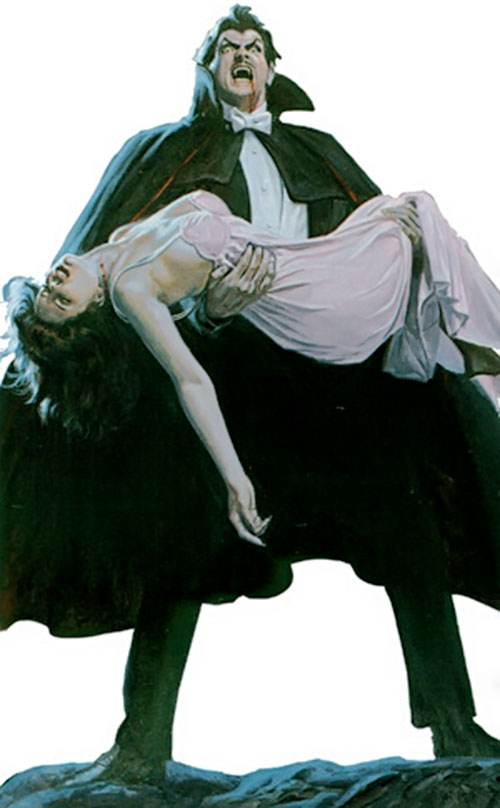 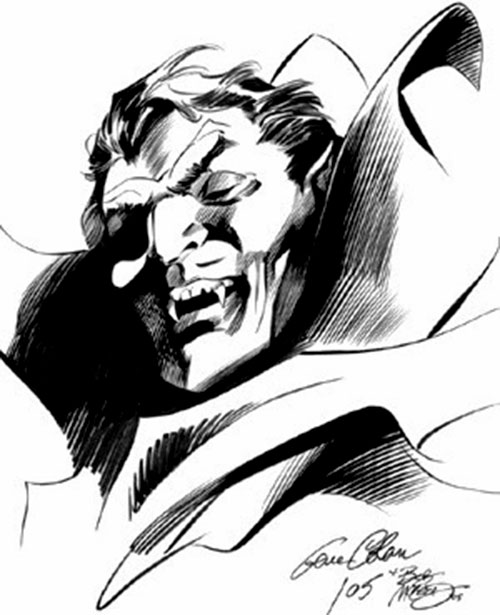 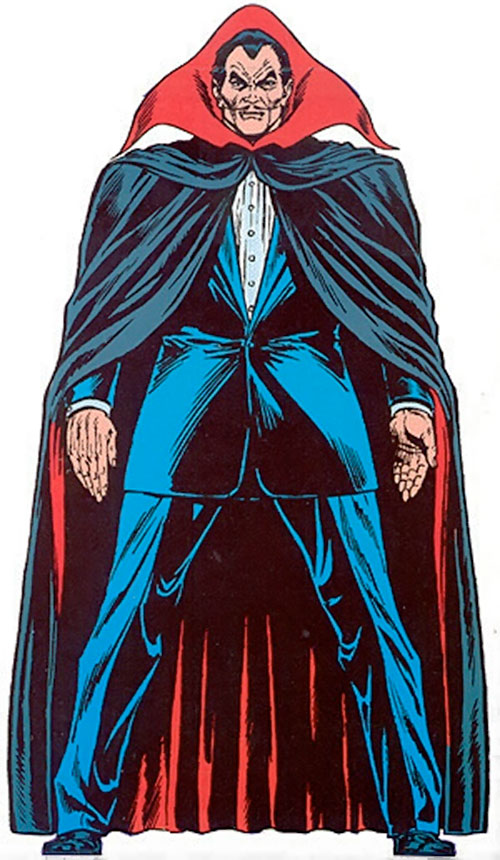 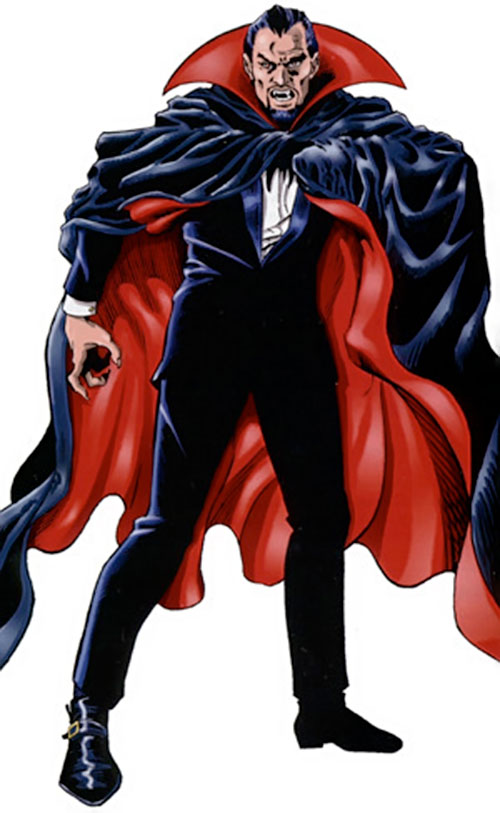 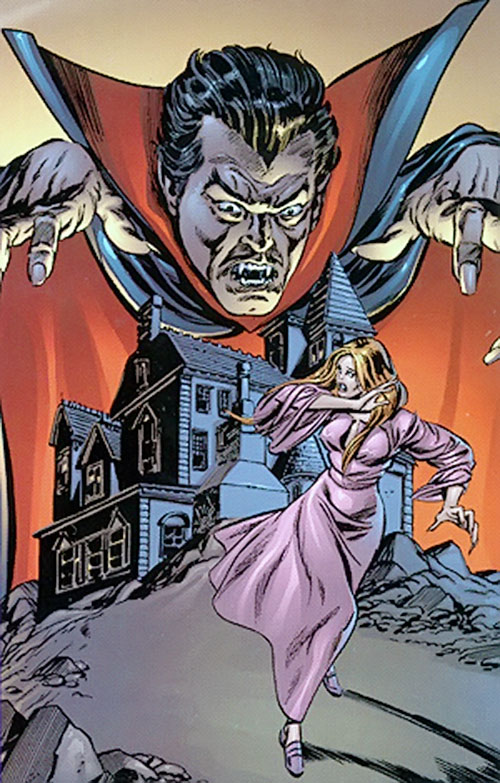