Dragon’s Claws was a post-apocalyptic action series from Marvel UK, published in 1988.

Though it was obscure and short-lived, it was sort of cool. By the standards of these days.

The titular Dragon’s Claws are a group of champion gladiators who become sort-of-good-guys mercenaries on a dying future Earth, in the year 8,162.

I’m appending “8162” to the name of the characters for clarity. This wasn’t actually the case in the comics. This approach is based on the naming convention for Marvel’s 2099 characters.

Something suitable that clearly evokes the UK in 1988, lessee…

Okay, that was when DJ Tim “Bomb the Bass” Simenon had a first, succesful album. These were the heydays of acid house music, and thus fairly important in the creation of later styles of electronica.

One tune in particular is also a notable, early example of a chiptune. It was composed for the Xenon II arcade game on Amiga personal computers.

Amigas were one of the few PC platforms that could play music with a non-horrible sound, and Bomb the Bass created a memorable little chiptune action music loop to leverage that. Yes, it overused samples but, look, early days.

https://www.youtube.com/watch?v=yNhmlG-3RO8
Not available for download on Amazon, but they have the I-guess-it’s-by-now-vintage CD.

In 8162, Earth is broken. It is slowly drifting toward the Sun, and the moon seems badly damaged – if not destroyed.

Most of the large bodies of water have evaporated. This left miles and miles of beaches with a few pools of stagnant saltwater.

Animals are few and far between.

Humanity seems to have thrown up its hands in the air and given up. There are no apparent large-scale, shared goals. People just pass the time until they die.

Some countries have broken up into small kingdoms. These range from the high-tech one-building self-contained town to Mad Max-esque thugs roaming aimlessly about.

Social unrest and riots are a constant problem in major cities. The police forces seem outmatched, outstretched and out of sleep.

It was also noted that disease was a major problem, presumably due to a lack of collective health care infrastructure. Medical supplies to treat illness, wounds, infection, etc. are even more highly valued than food and weapons.

Most of the technology we see is readily comparable to the 2010s. Say, when it comes to firearms.

This might be because most everything was scaled back from lack of resources. With some specific techs remaining viable because they happened not to rely on critical supplies.

The World Development Council is a sort of global ruling body. But its influence is uneven. In some places it’s the actual government, in some places people have barely heard of it.

It doesn’t seem particularly competent, either.

Thus was born the Game. Originally it was a sort of team paintball competition. It gradually became a hugely popular bloodsport. Then continued to degenerate until it was a lethal free-for-all.

The best team in the tournament was the widely popular Dragon’s Claws. Another favourite and close competitor were the Evil Dead. Unlike Dragon’s Claws, the ED racked a body count in the hundreds.

As the Game began to cause more unrest than it pacified, the WDC cancelled it. They then created the National Union of Retired Sport Experts (NURSE) to support and appease ex-players. The WDC certainly didn’t want these dogs of war to be let loose. 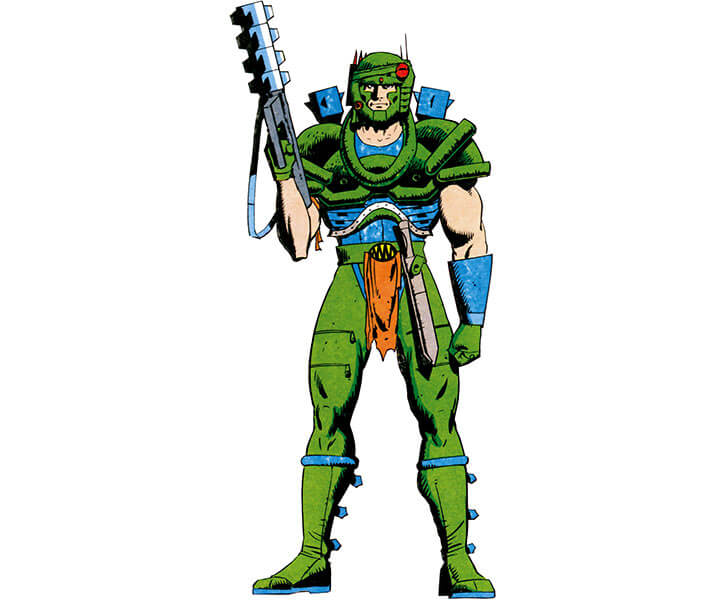 Another key asset is that he’s an exceptional leader. Without Dragon, the Claws are a pathetic rabble of psychotic and/or irresponsible misfits. With him they are the most efficient combat unit on the planet.

Dragon’s ability to predict his opponent’s moves borders on the infernal. Every apparent weak point in his strategy is likely to be both a feint and a trap. This works as long as he has enough information to reason with – and a few seconds to bark orders.

One typical Dragon move was luring Slaughterhouse to Dragon’s sniper perch, atop a high girder in a building under construction.

Slaughterhouse being much more acrobatic and faster than even Dragon, he happily engaged Dragon in close combat on the girder. He did not pause to think that it was a stupid position for Dragon to put himself in.

He thus was flatfooted when Dragon tackled him, throwing the both of them off the 30-stories building. Dragon’s fall was stopped by the one-metre tether discreetly attached to his ankle. Slaughterhouse’s wasn’t. 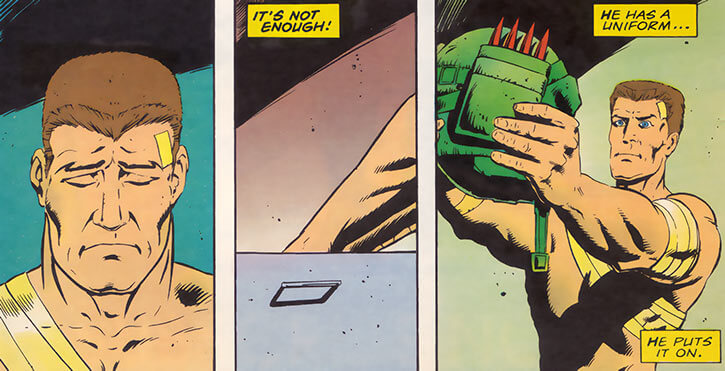 Dragon was found as a nameless boy, running wild in the slums. He couldn’t tell who his parents were, or if he had a home.

He was raised in the World Development Council’s Trent Orphanage. They named him “Dragon” after his fiery temper and uncontrollable nature.

As a young man, he found an outlet for his energy in sports. The lad excelled at a wide variety of athletic and combat disciplines.

Cunning rather than academically brilliant, Dragon had little use for schooling. He only seemed interested in pursuing a life based around the newly created Game – the WDC‘ s “hunter and hunted” combat sport.

His first game as field runner for the Courtland Rangers ended in tragedy.

Dragon quit, dropping off the radar.

He re-emerged in the African Colonies in 8148. There, he led a hardline team of ex-mercenaries on combat drops among the war-torn remains of Sudan.

Injured in 8149, Dragon was ferried back to Greater Britain by his childhood friend, Titus Carling. Carling — now head of the vast Texcorp Conglomerate — saw to Dragon’s convalescence and re-integration into society.

Master of the Game

Once more, it was the Game that fired Dragon’s enthusiasm. He set about forming his own team over the following few years.

By 8155, Dragon’s Claws were competing for the championship.

The Claws reached Division Three (Rogue League) before their blocker, Megaton, quit over disagreements with Dragon.

The recruitment of Steel, in 8157, took them to the top of the League Of Nations. His roster was :

Dragon took the Claws out of competitive events in 8158, after the Miami bloodbath.

Through N.U.R.S.E., Dragon was relocated to a small farm on the outskirts of London.

In 8159, Dragon met and married Tanya Ritinski. He adopted her son, Michael, as his own. At this point, the Game was stopped by the WDC, since it had gotten out of hand.

Life on the farm was good. But Dragon still craved combat – which his wife sensed, and loathed. 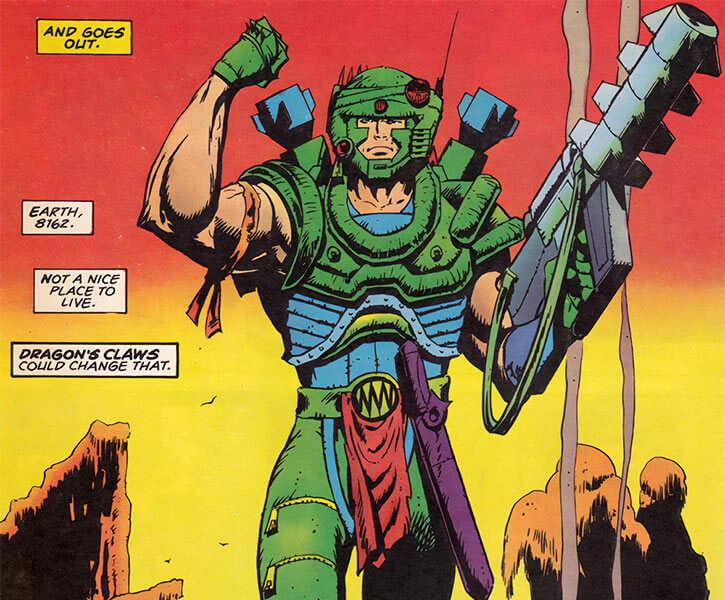 Note how the family farm was built on a dry sea floor.

The vermin have inherited the earth

After the Game was stopped, marauding teams of players with the same lust for combat as Dragon’s became a major problem for law enforcement.

The worst were outright outlaws, criminals and terrorists.

The primary example was the former #2 team, the Evil Dead. The Evil Dead could easily defeat ten times their number in militarised police.

N.U.R.S.E. then organised a sort of SWAT team to handle ex-Game teams. They offered Dragon the chance to lead it. But Dragon turned down the offer, for his wife’s sake.

No rest for the wicked

However, he was soon caught in an altercation with ex-Game C-listers, the Wildcats. The Wildcats followed him home and attacked the farm.

Although he managed to kill them all, the damage was done. Dragon’s addiction to action was now even stronger than he was. He agreed to N.U.R.S.E.’s offer, and was rejected by his family.

N.U.R.S.E. reunited Dragon with the Claws. The champs were back in action. 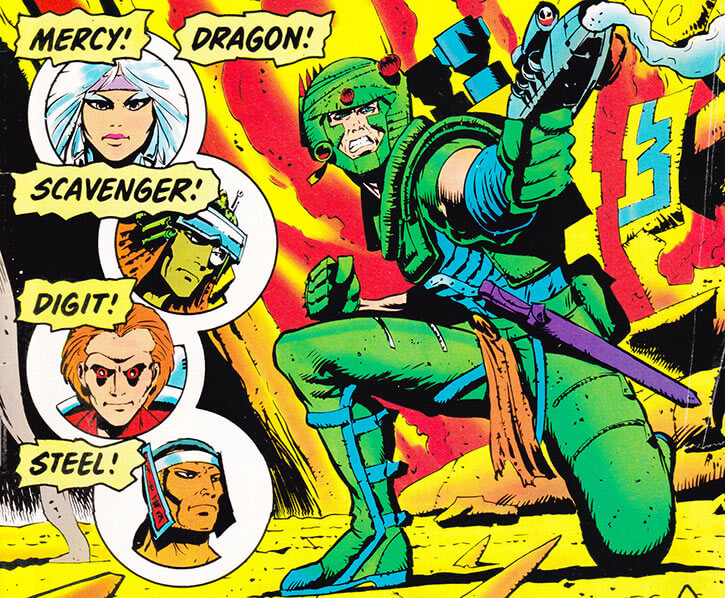 His odd headgear *might* be a reference to Star Wars character Dengar  .

I guess. Possibly. Probably not.

A smart, reserved fire team leader and veteran. He likes to see his orders followed and his team focused.

He sees neither his team nor himself as murderers. Dragon is usually reluctant to use lethal force unless the alternative wouldn’t make sense.

Dragon is an ethical man. He prefers to make sure that he works for the morally superior side. He won’t agree to have the Claws take down people who aren’t criminals of some sort.

This sort of good will is rare in the apathetic ninth millennium. Almost eccentric.

Dragon did try to live a peaceful life as a farmer. But his need for action, fighting and adrenaline is pathological, physical, addictive. He craves it, even when it goes against his best judgement, harnessed willpower and love for his wife and son. 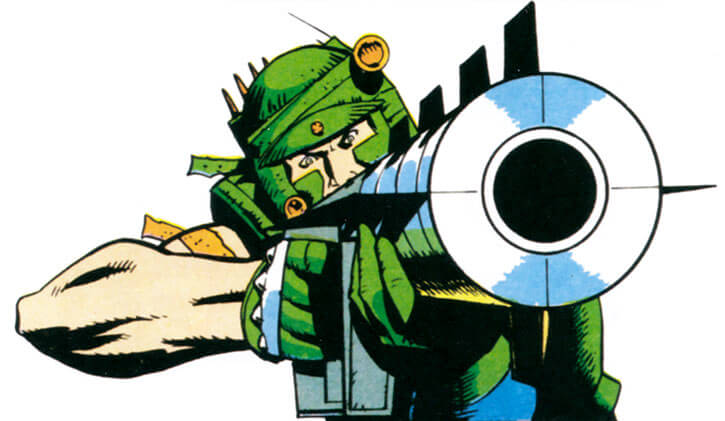 “Trouble ? Son, you don’t know what trouble is.”

“We are here as authorised agents of the World Development Council and N.U.R.S.E.. We have unlimited sanction in this matter.” 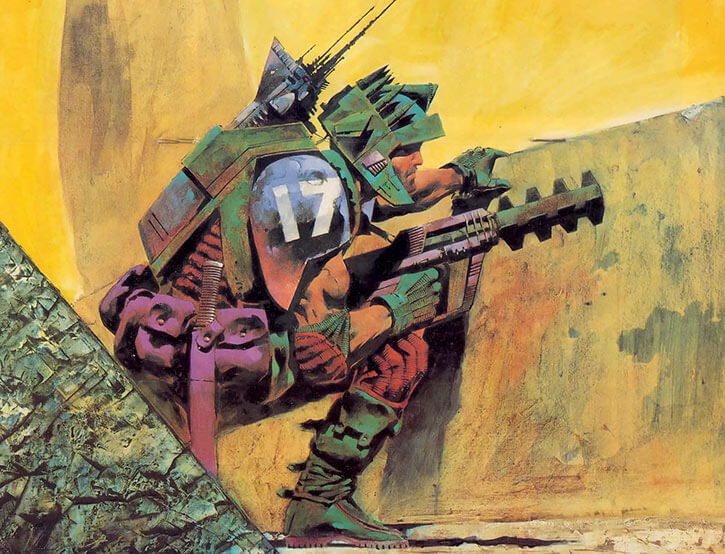 The “master of tactics and dirty tricks” angle of the character is well-supported by the Advantages in M&M.