“Dragoncat” is a decent martial arts instructor. But he focuses on spectacular bone-breaking and brick-smashing techniques at the expense of overall combat efficiency. He is actually able to kill thugs with his bare hands, but when faced with a determined opponent, his dismal Hero Points  usually mean he’s out of luck. He operates on a low-cinematic  level.

Dragoncat tries to project a general “ninja” image with Feudal Japanese weaponry and black ninja (or vaguely ninja-ish) garb. But if hard-pressed will not hesitate to pull out a .45.

Philip “Dragoncat” Parsons is a very minor Gotham area criminal. He is always looking for an angle to leverage his martial arts abilities and brashness into profit. He worked for years as a karate instructor. Parsons briefly taught Barbara Gordon when she was in her teens.

One of his most promising accomplishments was to create “ninjutsu” summer camps. These were to teach kids the “way of the warrior”. Asides from the mundane operation of such a business venture, the goal of those camps was to spot promising youngsters. Recruits were both physically adept and amenable to joining Parsons’ gang to commit thefts.

Using movie ninja-like weaponry and outfits, Parsons’ gang was successful in their thefts. However, one of the “ninja” slipped and fell to his death during a rooftop run.

The “ninja” was identified as a known problem kid from the area. This led Robin (Tim Drake) to investigate the “ninja thieves”. The young sleuth soon made the connection with the training camp, which he infiltrated before bringing the whole operation down.

Parsons later associated with Cluemaster for a roughly similar project. It was a “crime school” which the Cluemaster ran to turn young thugs into viable henchmen for other criminals. However, the teachers were no Taskmaster. Several of the “pupils” were captured during a “field trip”. 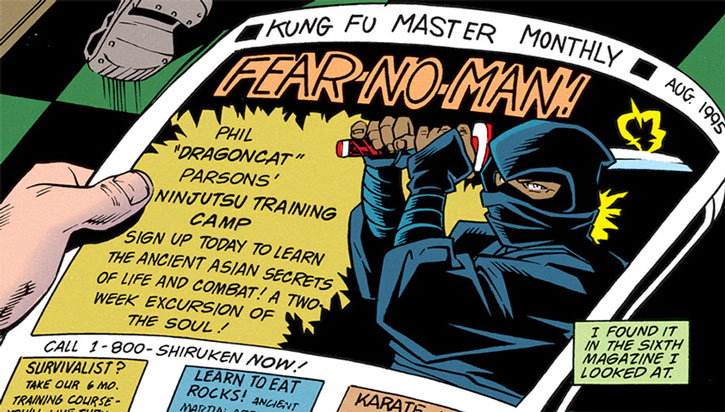 Cluemaster sent Dragoncat to the police station. Parsons passed himself as a lawyer, to assess whether the thugs would stay quiet. Dragoncat decided that those guys were too stupid to be intimidated into keeping their mouth shut, and killed them all with his bare hands. But one youth survived, and was interrogated by Sheriff “Shotgun” Smith at the local ICU.

Shotgun and his deputies raided the Cluemaster’s warehouse and cornered Dragoncat. The other criminals were away. Parsons tried to take on the cops, but though he gave a good account he had underestimated the raw tenacity and endurance of “Shotgun” Smith. Smith eventually knocked Parsons out by ramming him head-first into a wall.

“Dragoncat” was arrested. He has barely been seen since.

Parsons is pretty big on the “martial arts master” and “ninja warrior” side of things. But it’s much more a “I’m a total American badass, fear my manly leet skillz” angle than a “I know the ancient mysteries of the Orient” angle. He’ll often boast about how tough and highly trained he is.

He’ll do things such as violently resisting arrest – punching a hapless cop hard enough to send him to the hospital. Or taking stupid kids along with him on very dangerous capers.

Guides to the DC characters 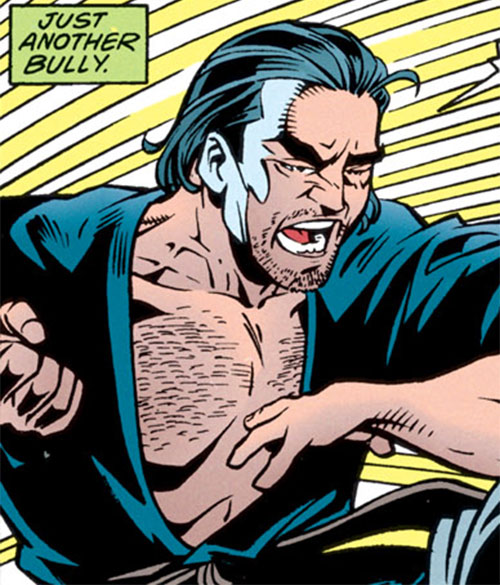 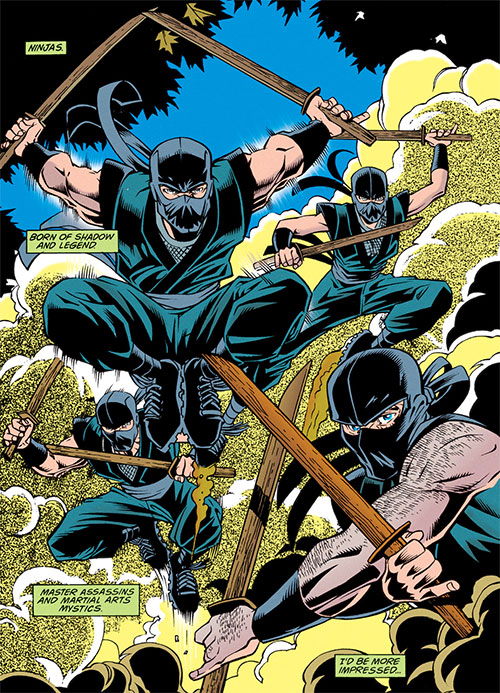