Dragonfly is an obscure, inconsequential Marvel character. She appeared in the earliest adventures of the all-new, all-different X-Men back in 1975.

Reading the team profile for the Ani-Men before this one isn’t a bad idea. But it’s not critical.

Dragonfly is an odd character that never fits anywhere, gets involved in random storylines, barely does anything, and about whom little is ever explained. I thus suspect she’s my long-lost sister.

There’s very little information, so you could make up any number of hypotheses about her nature, her powers, her biography, etc.. Inhuman ? Unusual mutant ? New Men ? mutateA person mutated after birth, as opposed to a born-this-way mutant with alien DNA ? Rogue scientist ?

She seems to have technical skills, for example to read radar screens. She also may have training and/or experience in unarmed combat and aerobatics.

Dragonfly seldom does anything in a fight. Usually she’ll just hover above the melee and… uh… that’s it. She doesn’t even seem to take photos for her Pinterest board  .

When exposed to cosmic radiation, she would periodically turn into a sort of giant alien insect. Being immersed in water would drain the radiation, allowing for shorter episodes.

This form wasn’t as durable as it seemed, and couldn’t speak. But it could fully control all insects within 200 feet (70 metres), easily overriding Ant-Man’s equipment. 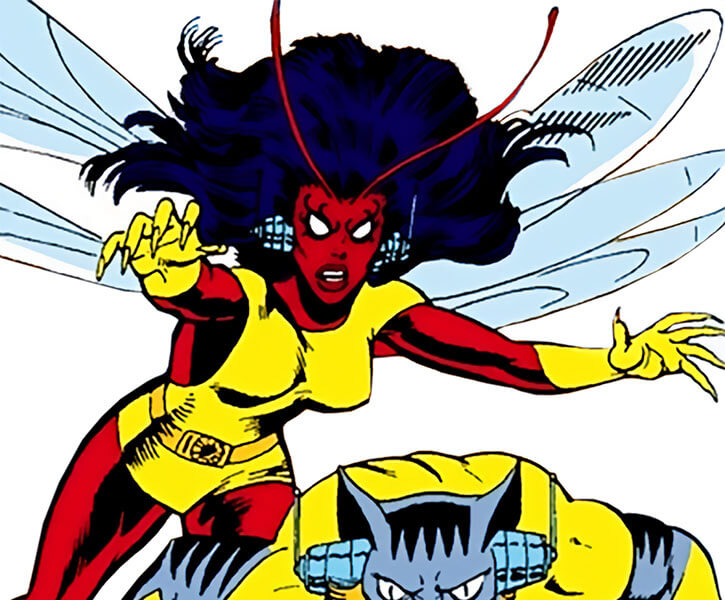 Dragonfly was part of the Ani-Men when Count Nefaria invaded a NORAD facility in 1975.

She didn’t resemble the rest of the team. But all we know is that in one flashback she’s in a giant test tube along with the other Ani-Men. Where she comes from, why she’s there, her nature, etc. are all unknowns.

Dragonfly was the first to spot the arriving X-Men on the radars. She also mesmerised a bunch of USAFSP  airmen and sent them after the X-Men.

(Had this story taken place 13-ish years before, Dragonfly could conceivably have mesmerised Chuck Norris and sent him to fight Wolverine (James Howlett). But, alas. Alas. Alas !)

Once the mutants reached the Ani-Men, Dragonfly took mental control of Cyclops. However, this led to an accidental optical blast discharge that knocked her out.

Dragonfly wasn’t detained by the USAF along with the other Ani-Men. Rather, she was transferred to the Chieftain Kinross, Dr. Moira MacTaggert, in the UK.

This was presumably on the behest of Professor Xavier’s US government contacts.

Though even the X-Men didn’t know it then, McTaggert’s lab on the Isle of Muir included a special high-security prison for dangerous mutants.

That Dragonfly ended up there presumably means that she’s a homo superior mutant. Which is confusing.

In 1977, a raid by Erik the Red led to Magneto being returned to adulthood and escaping from Muir. In the subsequent fracas, Dragonfly slipped out of her cell. 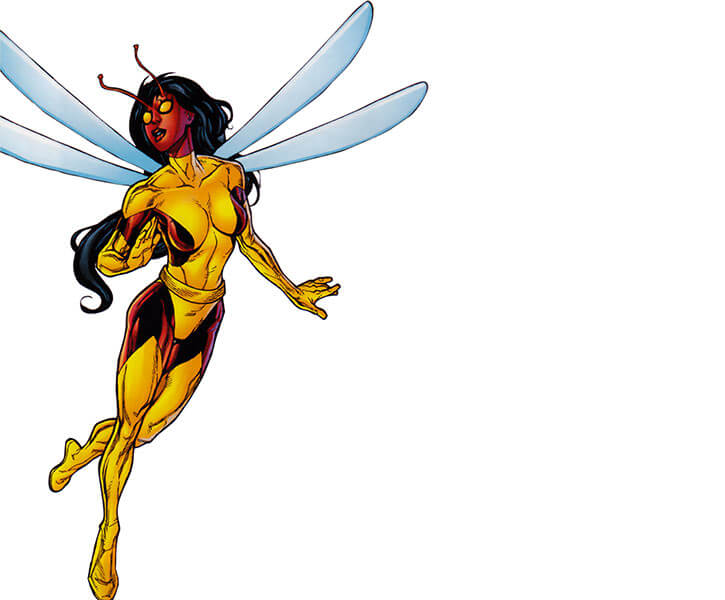 She was one of the many prisoners on the Stranger’s laboratory world. Her prison/habitat featured giant yellow flowers and giant green grass. Well, dragonflies are pollinators, after all.

She and many others were freed, but immediately placed under the mental control of the Overmind to attack the Stranger.

As soon as she regained her free will, a panicked Dragonfly assaulted Squadron Supreme member Lady Lark. She was desperate to find a ship to get back to Earth, and assumed that Lark had one.

The prisoners eventually cobbled together crude space convoys. One made it to Earth.

The convoy ended up in Siberia. But the refugees apparently managed to reach the US from there. Presumably, they again pooled their efforts.

Wait, what is she doing ?

In 1991, Dragonfly was… in Beverly Hills. This is where her estranged sister Margaret lived.

Exposure to cosmic radiation was causing Veronica to periodically become a sort of giant alien insect, with power over Earth insects. She was hoping that her wealthy sister would help. But the cruel Margaret just imprisoned Veronica.

Once a famous actress, Margaret had pivoted to become an animal trainer for movies. She was hoping to use her sister’s control over insects for profit, but Veronica rebelled.

The pen to hold Dragonfly’s giant form was built by the Electrolang company. Thus, Ant-Man (Scott Lang) discovered what was going on.

Though he accidentally wounded Veronica, he also had Margaret arrested. Then freed Dragonfly so she could receive medical care.

Wait, what is she doing there ?

Mere weeks later, Ms. Dultry was… aboard a cruise ship.

She and throngs of other super-women were richly paid to attend a free luxury cruise and a speech by Superia (Deidre Wentworth). Wentworth wanted to create in the XXth century the Femizons nation, which normally exists in the dystopic future of Thundra.

The arrival of Captain America (Steve Rogers) and Paladin resulted in a fight. Dragonfly was shot in a wing by Paladin, but that was just a stun beam.

This version of Femizonia was never created. Though technically, the guests could be considered Femizons while they worked together during the cruise.

(It is possible that Superia’s engineers helped Dragonfly shed the remaining cosmic radiation in her body. Since Wentworth was going all-out to convince everyone to join.) 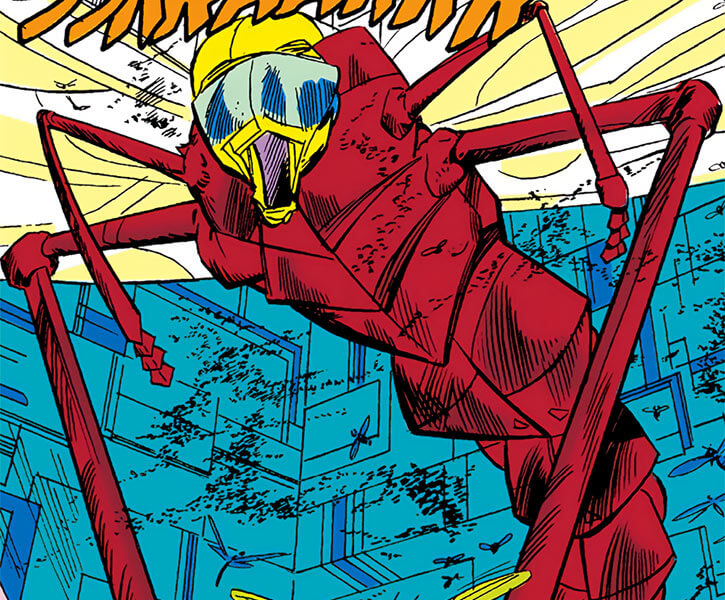 In 1993, Dragonfly… was one of the innumerable costumed rogues and criminals visiting the A.I.M. Weapons Expo.

There, she also attended a fighting match between Crossbones and a number of challengers.

When Crossbones was exposed as a disguised Captain America, Batroc offered a bounty to anyone who’d take him down. Dragonfly responded. But she apparently couldn’t get close enough to the chaotic pile-up that ensued.

In 1995, an A.I.M. adaptoid imitating Dragonfly was seen. Perhaps Ms. Dultry was wounded during the 1993 brawl, allowing A.I.M. to analyse her physiology.

In 1999, Dragonfly… had joined the Crimson Cowl (Justine Hammer)’s version of the Masters of Evil.

However, the 25-person-strong Masters were taken completely cold by the Thunderbolts.

Along with Sunstroke, Dragonfly was ordered to break contact and assist the Cowl in deploying her master weapon. Howbeit, the three villains were knocked out by surprise by Moonstone (Karla Sofen). 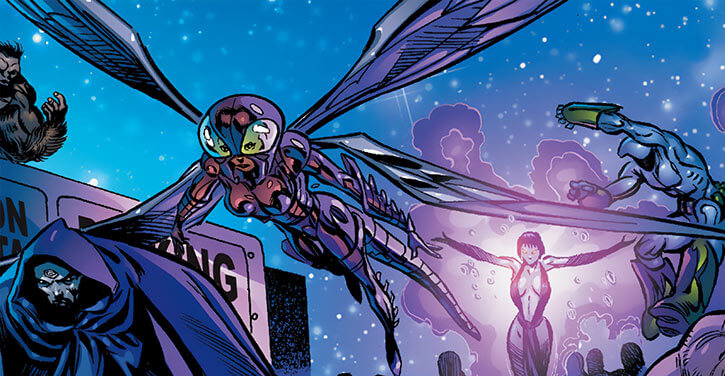 In 2006, Dragonfly… commissioned the Consultant. She thus obtained dragonfly-styled body armour. It also seemed to protect her wings, and had a tail for some reason.

In 2011, she was part of a mass escape from the Raft super-prison. But Giant-Man (Henry Pym) apparently took her out in one blow.

In 2015, she was glimpsed on Ryker’s Island. From there, she was transferred to S.H.I.E.L.D.’s Pleasant Hill altered reality prison.

In 2017, Dragonfly… was invited by Baron Helmut Zemo to join the Army of Evil. This presumably was because she had been on a Masters of Evil roster before.

This large force backed the takeover by the Fascist Steve Rogers’ Hydra. However, Rogers later betrayed them. He kept them all in stasis and out of the way.

In 2019, Dragonfly was among the many, many animal-themed costumed persons captured by Black Ant and the Taskmaster.

These were locked by a force field in Central Park. The next step of Arcade’s and Kraven’s plan was to have them all hunted to death by powerful robot avatars.

Veronica Dultry apparently survived this by remaining discreetly in the middle of the prey pack. And following the first credible leader who emerged – the Vulture (Adrian Toomes).

Dragonfly has inhuman eyes, wings and antennae. The rest of her body seems human, even when sunbathing in a bikini. However, her blood is brown.

Her four wings stay at their full size at all times, which can be inconvenient. Perhaps because of this, she prefers flying over walking.

Her eyes are usually drawn solid yellow. But from other panels it seems likely that they are microfaceted.

Early on, her sibilants came with some sort of hissing or droning sound. My theory is that Nefaria’s teleportation tech emitted cosmic radiation. And that Dragonfly mutated a tiny bit for a day or so, which altered her voice box.

When glimpsed in a swimsuit she had a White skin tone.

I’ve kept her official vitals, but she’s seldom drawn that tall. OTOH, she’s usually flying or hovering, so you rarely see her standing alongside another person. 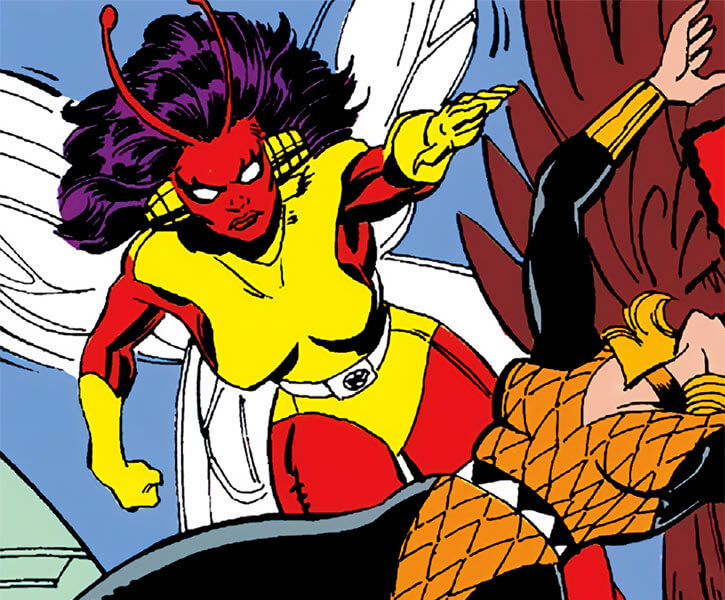 RADIO HEADSET [BODY 01, Radio communications: 10]. This was eventually phased out.

There is almost nothing to stat, mate. Most numbers are arbitrary, and I’ve kept things sparse to avoid speculation as much as possible.

She only used her mind control stuff during her 1975 debut. She has never done *anything* since. Except for that mind control attack on Cyclops and briefly wrestling with Lady Lark out of panic, she never takes a clear Dice Action.

This form was markedly larger. But a blast from Ant-Man (I’d eyeball its EV as 05) did wound her. Since we don’t see her move or attack either, any APs of Growth are apparently entirely cosmetic.

It has Animal Control APs, restricted to insects. The Area of Effect has a radius of 5 APs. But there ain’t much reason to assume high APs, since the APs of Animal Control of the Ant-Man helmet are low. Maybe it has 06 or 07 APs.